ABSTRACTThe proposed method is new, simple, sensitive, reproducible, economical, accurate and precise and can be successfully applied in estimation of Telmisartan (Telmi) from urine. This method can find applications in clinical studies and therapeutic drug monitoring. This method of colorimetric estimation of telmisartan from urine is based on the formation of yellow colored chromogen when it is reacted with alizarin in presence of thionyl chloride. The concentration of telmisartan over a range of 10-60 µg/ml was found to obey Beer’s law in the stated range. The yellow colored complex has absorption maxima at 427 nm with molar absorptivity and sandell’s sensitivity 2.2387 × 104 lit mol-1cm-1 and 0.0154 µg/cm2/0.001 absorbance units, respectively. The proposed method is highly sensitive, reproducible, specific, and the reagent was not found to react with the soluble matters of the body fluids. The results of analysis were validated as per ICH Q2B guidelines

INTRODUCTION: Telmisartan or (4-((2-n-propyl-4-methyl-6-(1-methylbenzimidazol-2-yl)-benzimidazol-1-yl) methyl)-biphenyl-2-carboxylic acid is an angiotensin II receptor (type AT1) antagonist 1, 2 (fig. 1).  It acts by blocking the vasoconstrictor and aldosterone secreting effect of angiotensin II by selective blocking the binding of angiotensin II to AT1 receptor found in vascular smooth muscles 3. It is not official in any pharmacopoeia. It is an effective agent for the treatment of hypertension and renal impairment. It has a lower incidence of cough than ACE inhibitors. It is white to off-white crystalline powder that is insoluble in water, freely soluble in methanol and acetonitrile 4. 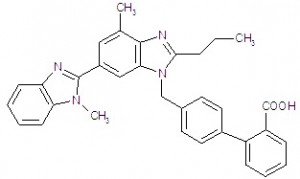 Procedure for plotting calibration curve: In to a series of 10 ml volumetric flasks, 1 ml of standard solution was pipetted out separately and to each flask 1ml of thionyl chloride was added. To this, 1ml of alizarin reagent was added and the solution was heated for 10 min on water bath. The flasks were cooled and final volume was made up to 10 ml with methanol. The absorbance of yellow color complex developed was measured against the reagent blank. The colored complex showed absorbance maxima at 427 nm and obeyed Beer’s law in the concentration range of 10-60 µg/ml. 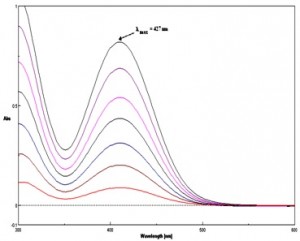 FIG. 2: OVERLAIN SPECTRA OF COMPLEX OF TELMISARTAN WITH ALIZARIN 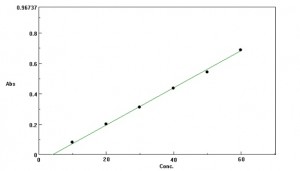 Y= A + B*C, where C is the concentration in µg ml-1 and Y is absorbance unit

TABLE 2: RESULTS OF ANALYSIS OF LABORATORY SAMPLE FROM URINE

Method Validation: The proposed method was validated according to ICH Q2B guidelines for validation of analytical procedures 35. The reagent was not found to react with the soluble matters of the body fluids as shown in Table 3. So, there was no interference in the results of analysis due to body fluid. The validation parameters determined are precision, accuracy, specificity, linearity, LOD & LOQ. The results are given in table 3 & 4.

RESULTS AND DISCUSSION: In the proposed method the color intensity of chromogen was intensified with 1ml of Alizarin reagent and the yellow colored complex showed a peak maximum at 427nm. Stability of the colored complex was studied and the chromogen was found to be stable for more than 48 hrs. Beer’s law was obeyed in the concentration range of 10-60 µg/ml. The equation of straight line was found to be Abs = 1.2201+0.0482 C with a correlation coefficient of 0.9991. The values for LOD and LOQ were found to be 8.362 and 9.21 respectively. The proposed method is new, simple, sensitive, accurate and precise and can be successfully applied for estimation of Telmisartan from urine.

CONCLUSION: The proposed bioanalytical method provides a sensitive and simple, approach to the determination of telmisartan in urine. Being a spectrophotometric method, the specificity is high as compared to chromatographic method. This method can find applications in clinical studies and therapeutic drug monitoring.

ACKNOWLEDGEMENT: Authors are thankful to the Principal, D.S.T.S. Mandal’s College of Pharmacy, Solapur, for providing the necessary facilities.