ABSTRACT: Women on different contraceptive methods have been linked with the development of various changes in lipids profile. Therefore, the relationship between contraceptive use and lipids changes needs to be investigated. Method: This was a cross-sectional randomized study conducted on non-lactating, non-pregnant women who were on different methods of contraceptives for at least a period of 6 months and were attending the Family Planning room at Al-shomaly hospital south of Babylon government. The study population consisted of a countryside population. One hundred twenty-five divided into five groups 25 women each group: (1): taken oral contraceptive (microgynon tablet), (2) taken oral contraceptive (microgynon tablet) with 400 IU Vitamin E per day, (3) on injectable contraceptive (depo Provera), and (4):  on injectable (depo Provera) with 400 IU Vitamin E per day and (5):  not taken any things as control individuals. Conclusion:  contraceptives have a series role in elevation of lipids profiles, and use of Vitamin E can reduce a degree of these effects

INTRODUCTION: Hormonal contraceptives are among the most reliable reversible methods of contraception. Their composition, dosage and usage vary, leading to differing rates of risk, side effects and advantages, as well as therapeutic and preventive effects 1. In the United States, hormone therapy delivered as oral contraceptives (OC) is one of the most commonly prescribed birth control methods, used by 11.6 million or 19% of women 2. In the early 1980s, third-generation oral contraceptives, containing the progestagens desogestrel or gestodene, were developed in an attempt to reduce the risk of cardiovascular diseases and to decrease androgenic side effects such as weight gain, acne, and adverse changes in metabolism of lipoprotein

Injectable and oral contraceptives appear to influence the concentrations of serum lipids and lipoproteins. Since hyperlipidemia is one of the risk factors of coronary artery disease (CAD), investigations of the hyperlipidemic effects of contraceptives are importance 5, 6. Contraceptive induces an increase in the production rate of apoB-containing lipoproteins all along the VLDL→IDL→LDL cascade 7. Depo Provera (medroxyprogesterone acetate, DMPA) when given as 150 mg by deep intramuscular injection every 12 calendar weeks (84 days+5 days). Oral contraceptive methods involve remembering to take a pill each day, in the case of the progestogen only pill within the same three hours each day 8. Vitamin E has a role in maintaining membrane integrity and protection from reactive oxygen species which has been implicated in both carcinogenesis and arterial injury by ischemia. As an antioxidant, it is capable of stopping the propagation of potent oxidants formed during cellular metabolism or introduced as toxic chemicals. It prevents peroxidation of membrane phospholipids 9. Vitamin E supplementation significantly reduced circulating oxidized LDL and reduced LDL oxidative susceptibility 10.

METHOD: This study was a cross-sectional randomized study conducted on One hundred and twenty-five, non-lactating, non-pregnant women, aged 20−45 years who were on contraceptives for not less than 6 months participated in the study who were on different methods of contraceptives and were attending the Family Planning room at Al-shomaly hospital south of Babylon government. The study population consisted of a countryside population. These women were randomly categorized into five groups with 25 women in each group

Group (5):  25 women were not taken any things as control individuals.

A questionnaire was used to collect patient information, that does include demographic data, history, and duration of contraceptive use. The questionnaire was given to each patient to complete in the Family Planning room of hospital to ensure confidentiality.

At the end of the study, we are found that there was a significant difference between Control, OC 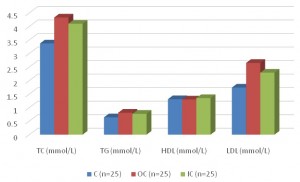 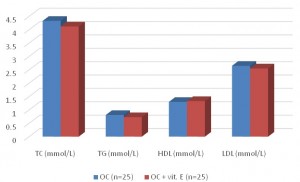 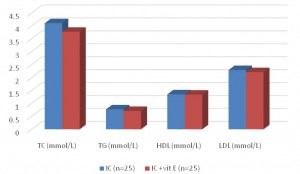 DISCUSSION: Contraceptives have been in use for more than two decades, and at the present time, 150 to 200 million women are using the preparations. Apart from their gynecologic influence, the hormones have been shown to affect a number of metabolic and nutritional processes 11. This study found that Total Cholesterol (TC), Triglyceride (TG), and LDL levels for IC Group (3) and OC group (1) were higher as compare with control group (5).

These results are agreement with Abbey B. Berenson et.al. 2010 OC users significantly greater increases in levels of triglycerides (TG), total cholesterol (TC), but they were found unchanged in LDL level 12. Also J. W. H. DOAR AND V. WYNN 1969 show that significantly raised serum triglyceride and cholesterol levels during oral contraceptive therapy 13. Colvin PL Jr 1993 concluded estrogens have been reported to increase hepatic catabolism of low-density lipoprotein (LDL) by the LDL receptor (LDL-R) pathway and to increase the concentration of mRNA for the LDL receptor. This study found that HDL levels for the control group were higher as compare with OC Group (1) and IC group (3). This result agreement with Fotherby K et.al. 1982 which found that high density lipoprotein was significantly reduced when women use contraceptives. Our result was disagreeing with Shahnaz Torkzahrani et.al. 2014 found that no significant differences were noted in HDL levels 14.

MA Sissan, S Leelamma 1996 showed that decreases in the plasma HDL level in female rats receiving 17 beta-estradiol 15. This study found that levels of triglycerides (TG), total cholesterol (TC), and LDL levels were decrease and increase in HDL level in women taken contraceptives in concomitant with Vitamin E as compare with those not taken. Fatemeh et.al. 2012 The use of vitamins E has beneficial in ameliorating coronary side effect of contraceptives by decrease levels of triglycerides (TG), total cholesterol (TC) 16. Shahnaz Torkzahrani et.al. 2014 found that the HDL level and the HDL/LDL ratio increased in women taken vitamin E with contraceptives 14.