The voltammetric behavior of olopatadine was investigated at hanging mercury drop electrode using cyclic voltammetry and differential pulse voltammetry. The drug under study exhibited a single, well-defined reduction peak owing to the reduction of carbon-carbon double bond. The electrode and reaction conditions which yielded maximum peak current were established using differential pulse voltammetry. A linear relationship was observed between the peak current and the concentration of olopatadine over the range 1.0 x10-8 M to 4.0 x10-7 M. The limits of detection and limits of quantitation were found to be 1.92ng/mL and 6.34ng/mL respectively. The proposed method was successfully applied for the determination of olopatadine in pharmaceutical formulations without interference from excipients.

INTRODUCTION: Olopatadine belongs to the class of topical antiallergic drugs used for the treatment of allergic conjunctivitis, allergc rhinitis, chronic uriticaria, eczema dermatitis, psoriasis vulgaris and pruritius cutaneous 1. Its IUPAC name is {(11Z)-11-[3-(dimethylamino)propylidene]-6, 11-dihydrodibenzo [b, e]oxepin-2-yl}acetic acid and its structure is  shown in Figure 1. It has been demonstrated that olopatadine is clinically superior to other allergic drugs owing to its dual activity as antihistamine and ocular mast cell stabilizer 2.

The efficacy of the drug is evaluated based on its effective diminishing action on the expression of cell adhesion molecules and inflammation markers in conjuctival surface cells in patients with seasonal allergic conjunctivitis 3. The efficacy and tolerability of olopatadine and cromolyn sodium 2% are compared and it is inferred that olopatadine had significant effect on ocular signs and symptoms of allergic conjuctivitis than cromolyn 2% opthalimic solution 4.

The increased ocular comfort and patient acceptance for olopatadine is mainly due to its restricted interaction with membrane phospholipids thereby inducing less degree of membrane perturbation and release of intracellular constituents 5. Based on the conjuctival allergen challenge model, the efficacy, safety, optimal concentration and dosage of olopatadine are evaluated in the treatment of allergic    conjunctivitis 6. 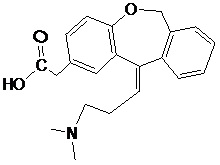 The enzymes responsible for olopatadine metabolism are identified and the effect of olopatadine on human liver microsomal cytochrome P450 activities is studied 7. The inhibitory action of olopatadine on cytokine genes in rat basophilic leukemia cells is investigated 8.  The physiological significance of S100 proteins can be determined based on the selective interaction of these proteins with olopatadine 9.  Olopatadine is also found to improve the neuronal conditions of spinal cord and eczematous skin lesions in contact dermatitis 10.

Pharmaceutical analysis is an important aspect during drug production, drug development, pharmacokinetics and pharmacological studies. A number of analytical methods have been developed for the determination of olopatadine in human plasma using high performance liquid chromatography-tandem mass spectrometry 11-13.

The aim of the present work is to establish a voltammetric procedure for the determination of olopatadine in bulk drug form and in pharmaceutical formulation. The method developed is a simple, fast, less expensive method with high sensitivity and selectivity.

MATERIALS AND METHODS: Electrochemical measurements were performed by Metrohm E-506 polarecord (Herisau, Switzerland) in combination with Metrohm 663VA stand and with 612 VA scanner. A three electrode system consisting of hanging mercury drop electrode (HMDE) as a working electrode, a Ag/AgCl/KClsat as a reference electrode and Pt wire as a counter electrode was employed. An Elico LI-120 pH meter was used for the determination of pH of the buffer solutions.

Olopatadine hydrochloride was obtained from Intas pharma (Ahmedabad, India). Olopine 0.1% ophthalmic formulation was procured from local dispensary. Britton-Robinson (BR) buffer of pH range 2-12 was obtained by using acetic, phosphoric and boric acid of 0.04 M each and the pH of the solution was adjusted using 0.2 M NaOH solution. All the chemicals and solvents used were of analytical reagent grade obtained from Merck (Mumbai, India).

Voltammetric determination of olopatadine at HMDE: By dissolving an appropriate amount of olopatadine in methanol, a stock solution of concentration 1.0 x10-3 M was prepared. A working standard was prepared from the stock solution by dilution with double distilled water. 1.0 mL of standard solution and 9.0 mL of BR buffer of pH 3.0 was placed in the electrolytic cell and purged with nitrogen gas for 15 minutes. The potential of the electrode was negatively scanned from 0.0 to -0.4 V vs. Ag/AgCl. Olopatadine exhibited maximum peak current at -0.19 V in BR buffer of pH 3.0. The voltammograms of the blank and olopatadine of conc. 1x10-6 M were recorded under same conditions (Figure 2).

Cyclic Voltammetric Study of Olopatadine: An aliquot of standard solution of olopatadine of concentration 1.0x10-6 M and 9.0 ml of BR buffer of pH 3.0 was placed in the electrolytic cell and purged with nitrogen gas for 15 minutes. Cyclic voltammogram was recorded by cycling the potential of HMDE from 0.0 V to -0.4 V vs. Ag/AgCl at a scan rate of 100mV/s. A single, well defined reduction peak was obtained at -0.19 V for olopatadine due to the 2e- reduction of the exocyclic carbon-carbon double bond. The reduction mechanism of olopatadine at HMDE was given in Figure 3.

The absence of the anodic peak on the reverse scan indicates that the reaction is irreversible. The cyclic voltammograms of the olopatadine of three concentrations, (a) 1.0 × 10-6 M, (b) 2.0×10-6 M and (c) 3.0×10-6 M were registered under similar conditions (Figure 4). The number of electrons involved in the reduction reaction was found to be 2 based on millicoulometric studies. 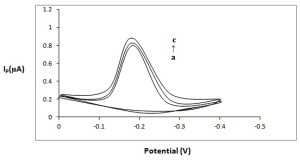 Effect of pH: The pH of the medium plays an important role affecting the rate of accumulation and the rate of electrode reduction reaction. The influence of pH on the peak current was studied for 1x10-6 M of olopatadine between pH 2.0 to 10.0.

The peak current increases with pH initially and reaches a maximum value at pH 3.0 and then decreases as shown in Figure 5. The increase in pH shifted the peak potentials to more negative values suggesting proton participation in the reduction process. 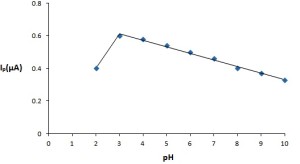 Effect of Accumulation Potential: The effect of accumulation potential on the peak signal was investigated at HMDE       for 1x10-6 M olopatadine. It was found that ip value reaches maximum value at -0.8 V vs. Ag/AgCl (Figure 6). The maximum peak current at -0.8 V was due to the increased rate of accumulation owing to the favorable orientation of molecules by the applied electric field at the electrode-solution interface. 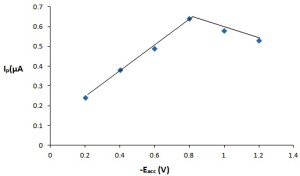 Effect of Accumulation Time: The variation of peak current with accumulation time was studied for a conc. of 1x10-6 M olopatadine solution. As the pre-concentration time increased the peak current increases slowly and reaches a maximum value at 100 sec (Figure 7). With further increase in accumulation time, no effect on the peak signal was observed indicating that the electrode surface was saturated with the analyte molecules. 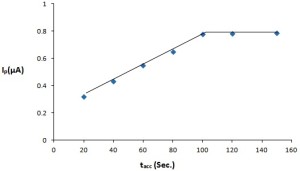 FIG. 7: EFFECT OF ACCUMULATION TIME ON PEAK CURRENT OF OLOPATADINE OF CONCENTRATION 1X10-6 M   AT   HMDE

Effect of Scan Rate: The influence of scan rate on peak current was investigated over the range of 20-200 mV/s. A plot of log ip vs.  log ν was obtained and the linear equation was given by log Ip (µA) = 0.811 log ν(mV/s) - 0.887 with R2=0.999. The value of the slope was found to be close to 1 indicating that the reduction process under study was adsorption controlled at HMDE. The operational parameters involved in the determination of olopatadine using differential pulse adsorptive stripping voltammetry were optimized and given in Table 1.

TABLE 1: OPTIMUM VOLTAMMETRIC PARAMETERS IN THE DETERMINATION OF OLOPATADINE

Application of voltammetric method to Ophthalmic Formulation: An aliquot (0.1mg) of olopine 0.1% ophthalmic formulation was taken in 1000 mL volumetric flask and a series of concentrations 100, 200, 300, 400 and 500ng/mL were prepared. A recovery test was carried out on the above concentrations based on the proposed method. The average recoveries (%R) and the relative standard deviation (%RSD) for five replicate determinations were given in Table 2.

Calibration plot: A calibration plot was drawn between peak current and the concentration of olopatadine over the range 1.0 x10-8 M to 4.0x10-7 M. It was observed that the peak current increases linearly with the concentration of olopatadine. The linear regression equation was given by Ip(µA) = 0.221C(µM) + 0.336 with R2=0.999. The limits of detection (LOD = 3s/m) and limits of quantitation (LOQ = 10s/m) were calculated as 1.92 ng/mL and 6.34 ng/mL respectively where s is the standard deviation of the intercept and m is the slope of the calibration curve.

Specificity of the procedure: The developed procedure was applied for the determination of bulk drug olopatadine of concentration 1.0x10-6 M in the absence of excipients and ophthalmic formulation of concentration 1.0x10-6 M in the presence of excipients. Five replicate determinations were carried out in each case using the proposed method. Themean recoveries (%R) and relative standard deviation (%RSD) were given by 98.9±1.21 to 99.8±1.26 (without excipients) and 98.5±1.22 to 99.6±1.24 (with excipients) with no significant difference. Hence, the procedure could be considered as specific.

Robustness of the determination: The effect of variation in operational parameters on the determination were studied by changing the pH, accumulation potential and accumulation time and scan rate. The results obtained have no significant differences suggesting that the procedure was sufficiently robust in nature.

Precision of the method: The inter-day and intra-day precision was established by determining the bulk drug of conc.1.0x10-6 M on five successive days and five times on a single day using the protocol developed. Themean recoveries (%R) and relative standard deviation (%RSD) values are 99.8 (%R) and 1.8 (%RSD) for inter-day and 99.6(%R) and 1.2(%RSD) for intra-day measurements. The results indicated the high precision of the proposed method.

CONCLUSION: The electrochemical reduction of olopatadine at hanging mercury drop electrode was studied and its reduction mechanism was proposed. The proposed method could be directly applied for the determination of bulk drug and pharmaceutical formulation. The procedure developed is a simple, rapid, cost effective, highly sensitive and selective one and it does not require any sample pre-treatment and extraction steps. The high accuracy and precision of the procedure is confirmed by excellent mean recoveries (%R) and low values of relative standard deviation (%RSD). The sensitivity of the present method can be further increased by using square wave adsorptive stripping voltammetry which is currently under investigation at our laboratory.

ACKNOWLEDGEMENT: One of the authors is thankful to UGC, New Delhi, India, for financial support in the form of JRF.