ABSTRACT:Anticoagulants are a class of drugs commonly used to prevent the blood from forming dangerous clots that could result in a stroke.Warfarin is an oral anticoagulant. Warfarin differs from most other drugs in that the dosage required to achieve a desired therapeutic effect varies greatly among individuals. Resistance to warfarin has been described as the inability to prolong the prothrombin time or raise the international normalized ratio (INR) into the therapeutic range when the drug is given at normally prescribed doses. However, a higher warfarin requirement does not itself establish the diagnosis of warfarin resistance. Warfarin resistance can be classified as acquired versus hereditary. It can be diagnosed by laboratory studies and can be managed.

INTRODUCTION: Anticoagulants are a class of drugs commonly used to prevent the blood from forming dangerous clots that could result in a stroke. Often called "blood thinners," and are frequently prescribed by doctors following a stroke. They act by reducing the ability of the blood to clot and thereby reducing the likelihood of coronary or vascular emboli 1, 3.

Warfarin is an oral anticoagulant. Daily use of warfarin can reduce the risk of stroke in certain patients. For example, patients with atrial fibrillation (a heart irregularity) are prescribed warfarin.  Use of warfarin requires careful monitoring including regular blood tests. It acts on the liver to decrease the quantity of a few key proteins in blood that allow blood to clot 1.

Resistance to warfarin has been described as the inability to prolong the prothrombin time or raise the international normalized ratio (INR) into the therapeutic range when the drug is given at normally prescribed doses. However, a higher warfarin requirement does not itself establish the diagnosis of warfarin resistance. The prevalence of warfarin resistance varies by patient population and is difficult to determine. The difficulty lies largely in accounting for dietary factors and in defining normal metabolic variations among individuals.

Patients who need more than 105 mg per week (15 mg/day) should be considered warfarin- resistant. An important characteristic of warfarin resistance is that patients need much smaller doses of vitamin K to reverse the effect of warfarin 1, 4.

Mechanism of Action of Warfarin: Warfarin and related 4- hydroxycoumarin- containing molecules decrease blood coagulation by inhibiting vitamin K epoxide reductase, an enzyme that recycles oxidized vitamin K to its reduced form after it has participated in the carboxylation of several blood coagulation proteins, mainly prothrombin and factor VII 2, 3. For this reason, drugs in this class are also referred to as vitamin K antagonists. When administered, these drugs do not anticoagulate blood immediately. Instead, onset of their effect requires about a day before clotting factors being normally made by the liver and the duration of action of a single dose of racemic warfarin is 2 to 5 days. Under normal pharmacological therapy the drugs are administered to decrease the action of the clotting factors they affect by 30 to 50% 3.

In an oxidation-reduction cycle (known as the vitamin K cycle, (figure 1), vitamin K is converted to its active quinone form by two enzymes, VKORC1 (which is blocked by warfarin) and DT-diaphorase (which is not affected by warfarin). The active form is a required cofactor (along with gamma-glutamyl carboxylase) in the posttranslational carboxylation of factors II, VII, IX, and X and proteins C and S 2. In the process, a vitamin K epoxide forms and needs to be reduced back to vitamin K by VKORC1, completing the cycle 10, 11.

When oral warfarin therapy is started, it begins to inhibit the synthesis of clotting factors that have a short half-life (i.e., factor VII and protein C) within 12 to 24 hours. However, warfarin does not achieve its full antithrombotic effect until 5 to 7 days after initiation 6, 8. This is the time it needs to reach a steady-state concentration and to suppress the clotting factors with the longest half-lives, namely, factor X, which has a half-life of 30 to 40 hours, and factor II, with a half-life of 60 to 70 hours 11, 13. 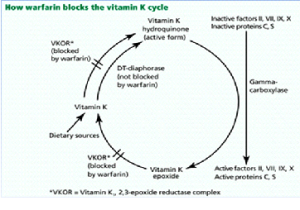 Indications for use: Common clinical indications for warfarin use are atrial fibrillation, the presence of artificial heart valves, deep venous thrombosis, pulmonary embolism (where the embolized clots first form in veins), and long-term treatment and prevention of thromboembolic events. Warfarin is also used in anti-phospholipid syndrome 9.

Dosing of Warfarin: Warfarin differs from most other drugs in that the dosage required to achieve a desired therapeutic effect varies greatly among individuals. This variability can lead to therapeutic failure, potentially resulting in new thrombosis, or, at the other extreme, to life-threatening bleeding. Some need large dose, while some need small dose. Many factors can affect the INR level including a change in diet or a change in medications or the onset of a new illness 5, 9. Warfarin resistance can be classified as acquired vs hereditary

Causes of Warfarin Resistance: Warfarin resistance can be classified as acquired vs. hereditary based on the cause 4, 14.

Acquired resistance to warfarin may result from;

Drugs that may increase Warfarin Responses are:

Drugs that may decrease Warfarin Response are:

Herbal or dietary supplements (e.g., herbal teas, garlic, ginseng, ginkgo, St. John's wort) may interact with Warfarin, increasing the risk of serious side effects such as bleeding or blood clots 15.

Herbs that interact with warfarin are:

Hereditary resistance: has been postulated to be caused by genetic factors that result either in faster metabolism of the drug (a form of pharmacokinetic resistance) or in lower activity of the drug (pharmacodynamic resistance). Polymorphisms may play a role, as some VKORC1 and CYP2C9 variant alleles are known to be associated with increased sensitivity to warfarin.

Warfarin target blood coagulation by inhibiting the vitamin K epoxide reductase multiprotein complex (VKOR) 1. This complex recycles vitamin K 2, 3-epoxide to vitamin K hydroquinone, a cofactor that is essential for the post-translational γ-carboxylation of several blood coagulation factors 2, 3. Despite extensive efforts, the components of the VKOR complex have not been identified 4, 5, 6, 7, 8. The complex has been proposed to be involved in two heritable human diseases: combined deficiency of vitamin-K-dependent clotting factors type 2 (VKCFD2), and resistance to coumarin-type anticoagulant drugs (warfarin resistance, WR).

Here, we identify, by using linkage information from three species, the gene vitamin K epoxide reductase complex subunit 1 (VKORC1), which encodes a small transmembrane protein of the endoplasmic reticulum. VKORC1 contains missense mutations in both human disorders and in a warfarin-resistant rat strain. Over-expression of wild-type VKORC1, but not VKORC1 carrying the VKCFD2 mutation, leads to a marked increase in VKOR activity, which is sensitive to warfarin inhibition 16.

Diagnosis by history and laboratory studies:

1)      Educate the patient: Patient education is very much important to improve patient knowledge on warfarin therapy. Patient should know the importance of compliance to anticoagulation therapy. The importance of compliance should be reinforced during counseling. Educating the patient about diet and other medications that may interact with warfarin is also important to reduce the treatment failure 4, 14.It is important to review any changes in the patent’s medication regimen, with a view toward preventing or minimizing drug interactions.

2)      Increase the warfarin dose: If the patient truly has hereditary resistance, there are two approaches for treatment. The first is to increase the warfarin dose until the prothrombin time and INR are in the therapeutic ranges. When indicated, the warfarin dose can be safely titrated upward to more than 100 mg per day in patients who are monitored regularly- as all patients on chronic warfarin therapy should be- and whose other medications are otherwise stable. One such example is reported in a warfarin-resistant patient who needed 145 mg/day to maintain a therapeutic prothrombin time 7, 17.

3)      Use other anticoagulants: The third approach is to change to another type of anticoagulant. Other anticoagulant drugs currently available in the India include subcutaneous heparins (unfractionated and low-molecular-weight heparins), Acinocoumarol (Acitrom) and Phenindione (Dindevan) 19.