INTRODUCTION: A wound may be defined as a break or injury in the epithelial layer of the skin or can be also defined as a loss or breaking of cellular and anatomic or functional continuity of living tissue. Wound healing studies mainly aim to detect various factors influencing healing process, so they could be either used or avoid in clinical practice to favorably alter the healing process 1. Wound care can be traced back to early civilizations, and many of these treatments were based on the use of herbal remedies. Reports about medicinal plants affecting various phases of the wound healing process, such as coagulation, inflammation, fibroplasia, collagenation, epithelization and wound contraction are abundant in the scientific literature 2.

The wound is a type of skin injury in which it can be torn, cut or punctured, or when blunt force trauma causes a closed wound. In pathology, it specifically refers as sharp injury which damages the dermis of the skin. The wound healing is a part of homeostatic mechanism of body in which the skin (or another organ) repairs itself after injury. The outermost layer of skin called epidermis and the inner layer of skin called dermis exists in steady-state equilibrium in case of normal skin, forming a protective barrier against the external environment.

The normal (physiologic) process of wound healing is immediately initiated once the protective barrier is broken. A sharp injury that damages the dermal layer of the skin is called wound. The wound can be categorized into two types: closed wound and open wound. Wound healing in case of either accidental injury or surgical intervention involves a complex network of blood cells, tissues cytokines, and growth factors. Cellular activity is apparently increased in wound healing process, thereby causing an increased metabolic demand for nutrients. The deficiencies in some nutrition factors such as vitamin A or C could impede the cellular differentiation, immune function, and collagen formation leading to a delay in wound healing process 3. Wounds are unavoidable events of life, which may happen due to physical or chemical injury or microbial infections. The healing of wounds may deviate from a normal process and go under-healing, over-healing or failure of wounds which is common. Research on drugs that increase wound healing is a developing area in modern biomedical sciences 4.

Plant Profile: It is commercially known for its unripe fruits used as a vegetable. Commonly known as ridge gourd and troi. It is monoecious, annual, climbing or trailing herb, having a stem with 5-angled, its leaves are alternate and simple; stipules absent; petiole length up to 15 cm long. Male inflorescence racemose with long peduncle. Flowers are unisexual, regular, 0.5 cm long, lobes triangular, male flowers with 3 free stamens inserted on the receptacle tube, female flowers solitary, longitudinally ridged ovary, stigma 3-lobed. Fruit shape is like club-shaped, dry in nature and fibrous capsule 15-50 cm × 5-10 cm is present, acutely 10-ribbed, brownish, and dehiscent by an apical operculum, many-seeded. Broadly elliptical seeds, compressed, up to 1.5 cm long, smooth, dull black are present. Found widely and also cultivated throughout the different parts of India 5, 6, 7. 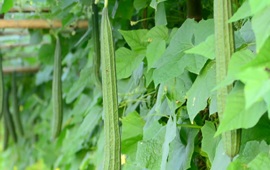 MATERIALS AND METHODS: The present study was carried out to evaluate the wound healing activity of Luffa acutangula. Qualitative analysis was done by using ethanolic extracts of the fruits. The details of the material used and the methods followed are described below.

Collection of Plant Materials: Fruit extract of Luffa acutangula were collected in the month of Sep, 2017 from local areas of Indore (MP). The fruit pulp of fresh fruits of Luffa acutangula was crushed and used for the study. The plant was authenticated by Dr. Sapna Malviya, Department of Pharmacognosy, Modern Institute of Pharma-ceutical Sciences, Indore and herbarium was submitted with specimen no MIPS/HERB/2018/07.

Extraction of Plant Material: The fruits were dried under shade and then powdered, and 25gm of powder sample was extracted with 500 ml of ethanol by using Soxhlet apparatus. The whole apparatus was kept over a heating mantle and was heated continuously for 4 h at the boiling point of solvent. The extract was concentrated to dryness and the residues were transferred to a pre-weighed sample bottle and were stored in desiccators for further studies 16, 17.

Wound Healing Model: Excision wounds were used for the study of the rate of contraction of wound. Animals were anesthetized with diethyl ether and the hairs on the skin of the back, shaved with seizure. A circular wound of about 400 mm2 area and 2 mm depth was excised on depilated dorsal thoracic region of excised rats, 5 cm away from ear. The entire wound was left open. The treatment was done topically in all the cases. The wounds were traced on transparent tracing paper by permanent marker on the day of wounding and subsequently on alternate days until healing was complete. Wound areas were measured on days 4, 8, 12, and 16 for all groups 18, 19.

Group I: (Negative control) were applied only cream base without any drug.

Preparation of Cream: Water-soluble cream base was prepared using formula given in Table 1.

Wound Contraction Period and Epithelization: An excision wound margin was traced after wound creation by using transparent paper and area measured by graph paper. Wound contraction was measured in each 4 days interval until complete wound healing and expressed in percentage of healed wound area. The percentage of wound closure was measured. The period of epithelization was calculated as the no. of days required for falling of the dead tissue without any residual raw wound. Wound area was measured by tracing the wound margin using a transparent sheet in each 4 day interval and healed area calculated by subtracting from the original wound area. On day 4, the wound contraction of standard and drug-treated groups was found to be significant in comparison to normal and diabetic control group, on day 16 standard treated group wound was almost healed while drug-treated group showed 96% healing which is significant when compared to normal and control groups. Effect of ethanolic extract of the fruit of L. acutangula on % wound closure of excision wound

The effect of the traditional herbal formulation was screened on excision wound models with the control (simple cream base B.P) and reference standard (soframycin). The measurements of the progress of the wound healing induced by the control (cream base B.P), reference standard (soframycin) and test formulation in the excision wound model are shown in Table 2 and Table 3. It is observed that the wound contraction ability period of epithelization in the test group (treated with ethanolic extract of Luffa acutangula) was significantly greater than that of the control group. 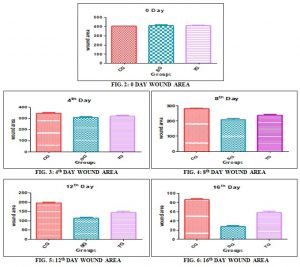 In excision wound healing model, animals of standard treated and drug-treated groups showed significant decrease in epithelialization period when compared to animals of normal control Wound healing deficits are diverse, multifactorial, and complex and inter-related. Wound healing is the primary response to tissue injury with different phases like contraction, granulation, epithelialization and collagenation which is mainly achieved by connective tissue structures and tissue layers in damaged tissue as closely as possible to its normal state 14, 15.

TABLE 4: PERIOD OF EPITHELIALIZATION IN DAYS

CONCLUSION: The overview of Luffa acutangula revealed that it is a source of many therapeutically important nutrients and chemical constituents such as luffangulin, cucurbitacin, oleanolic acid, myristic acid, amino acids, oligosaccharides, etc. Studies have shown its use in wound healing immunomodulation, tumor suppression, parkinsonism, antimicrobial, ulcer, and hepato-protection.

This study has shown that the ethanolic extract of the Luffa acutangula fruits have a significant wound healing effect on Wistar albino rats.

The survey of literature revealed that Luffa acutangula is the source of many therapeutically important chemical constituents as luffangulin, cucurbitacin, oleanolic acid, myristic acid, amino acids, oligosaccharides, etc. Studies have revealed its use in diabetes, immunomodulation, tumor suppression, Parkinsonism, antimicrobial, ulcer, and hepatoprotection. The fruit is consumed as food product all over India However, not much information is there to prove the use of this plant for paralysis, asthma, pulmonary tuberculosis, and menstrual troubles. Therefore, further studies may be carried out to prove the potential of this plant.

ACKNOWLEDGEMENT: We are very thankful to faculty staff and non-teaching staff of the Modern Institute of Pharmaceutical Sciences, Indore for their assistance and help. We apologize to our colleagues whose contributions were not cited due to limitations of space.

CONFLICT OF INTEREST: The author(s) confirm that this article content has no conflicts.