Material & Methods: Extracts from the dried leaves of Nyctanthes arbor-trisitis (Linn.) were prepared using methanol as solvent in order to investigate the wound healing activity in vivo. Circular excision and linear incision wounds were created on rats. Three groups of rats were prepared viz. control, standard and treated with extract. The methanol extract of Nyctanthes arbor-trisitis (Linn.) was tested for wound healing activity.

Results & Discussion: The wounds were monitored and the area of wound was measured on 4, 8, 12, 16 post-wounding days and the mean % wound closure were reported. Epithelization period was calculated as the number of days required for falling of the dead tissue remnants without any residual raw wound. Wound healing rate was measured using formula (Muthusamy et al., 2008). Significant wound healing activity was observed for the ointment prepared with methanol extract at 2% (w/w) concentration and with aqueous extract at 2% (w/w) concentration.

INTRODUCTION: Medicinal plants have been used since time immemorial for treatment of various ailments of skin and dermatological disorders especially cuts, wounds and burns 1. Wound is defined as a loss or breaking of cellular and anatomic or functional continuity of living tissues. Wound healing is the natural process of body for regenerating dermal and epidermal tissue 2 it, involves continuous cell-cell and cell-matrix interactions that allow the process to proceed in three overlapping phases viz. inflammation, cellular proliferation and remodeling, respectively. Inflammation is a phase of 0-3 days which involves migration of neutrophils around incision. Proliferation is of 3-12 days in which incisional space is filled with granulation tissue. Remodeling phase is of 3-6 months which involves synthesis of collagen fibers leading to increase in tensile strength of the skin 3.

Plant Materials: The leaves of Nyctanthes arbor-tristis were collected from local surroundings of Vidisha (M.P.) and kept it to dryness in shady area. The plant was identified and authenticated by Dr. P. G. Diwakar, Joint Director, Botanical Survey of India, Pune, Maharashtra, India, where a voucher specimen No. (BSI/WRC/Tech/2010-Nyct ARMP) of the plant has been kept in the herbarium.

Animals: The Wistar albino rats of either sex, weighing 150-200 g, were housed under standard environmental conditions of temperature and humidity (25±0.5°C) and 12 h light/ dark cycle were utilized for the studies. The animals were fed with standard pellet diet and waster ad libitum. The animal studies were performed in National Toxicology Centre, Pune, Maharashtra, India, with permission from Institutional animal ethical committee with registration no. 077/CPCSEA/India dated 23/7/2010.

Acute Toxicity Study: Acute toxicity study was performed according to OECD guidelines No. 423 (OECD, 2000). Mice were kept overnight fasting prior to drug administration. Swiss albino mice of either sex were divided into two groups with six animals each, one control group and other group received a single oral dose (2000 mg/kg, b.w.) of methanolic extract of leaves of Nyctanthes arbor-trisitis (Linn.) After the administration of NA methanolic extract, food was withheld for further 3-4 h. Animals were observed individually at least once during the first 30 min after dosing, periodically during the first 24 h (with special attention during the first 4 h) and daily thereafter for a period of 14 days for the symptoms of toxicity and death.

Excision Wound Model: The rats were anesthetized by administering ketamine (0.5 ml/kg b. w. i. p.). A full thickness of excision wound of circular area (approx. 500 mm2 and 2 mm depth was made on the shaved back of the rats 30 min later the administration of ketamine injection. The wounding day was considered as day 0 (Fig. 1). The wounds were treated with topical application of the ointments as described above till the wounds were completely healed. 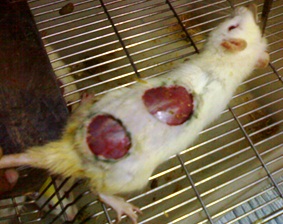 The wounds were monitored and the area of wound was measured for test and standard on day 4, 8, 12, 16 post-wounding days respectively (Fig. 2 & Fig. 3) and the mean % wound closure were reported in Table 1. The period of epithelization was calculated mentioned in Table 2 as the number of days required for falling of the dead tissue remnants without any residual raw wound 14, 15.  Wound healing rate was measured using following formula; 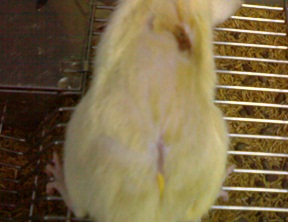 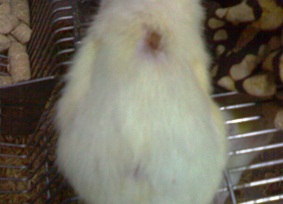 Data are expressed as mean ± S.E.M. Statistical analysis was done by one way ANOVA followed by Dunnett’s multiple comparison test,*p< 0.05, **p<0.01 as compared to control (n=6 per group)

TABLE 2: EFFECT OF TOPICAL APPLICATION OF OINTMENT CONTAINING METHANOLIC EXTRACT OF NYCTANTHES ARBORTRISTIS LEAVES ON TENSILE STRENGTH OF THE SKIN HAVING INCISION WOUND IN RATS

Data are expressed as mean ± S.E.M. Statistical analysis was done by one way ANOVA followed by Dunnett’s multiple comparison test,*p< 0.05, **p<0.01 as compared to control (n=6 per group)

Incision Wound Model 16, 17: The rats were anesthetized by administering ketamine (0.5 ml/kg b.w., i.p.). Incision wounds of about 6 cm in length and 2 mm in depth were created with sterile scalpel on the shaved back of the rats 30 min later the administration of ketamine injection. The parted skin was kept together and stitched with black silk at 0.5 cm intervals Surgical thread (No. 000) and a curved needle (No. 9) were used for stitching. The continuous thread on both wounds edges were tightened for good closure of the wounds. The wounds of animals in the different groups were treated with the topical application of the ointments as described above, for the period of 10 days. The wounding day was considered as day 0 (Fig. 4 ). 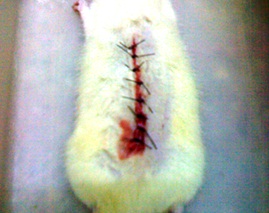 When wounds were cured thoroughly, the sutures were removed on the 8th post wounding day of Test and Standard (Fig. 5 & Fig. 6) and the tensile strength of the skin that is the weight in grams required to break open the wound/skin was measured by tensiometer on the 10th day reported in Table 2. 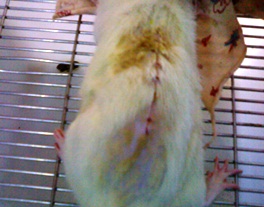 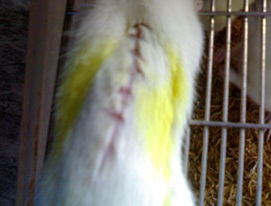 Statistical Analysis: Results obtained from the wound models have been expressed as mean ± SEM and were compared with the corresponding control group (simple ointment B.P.) by applying ANOVA test (Mukherjee et al., 2000).

Excision Wound Study: The results of wound healing activity by excision wound model are presented in Table 1 and Fig. 3. The value presented in the table represent percentage wound healing at  4,  8,  12, 16 days for control (simple ointment B.P. treated group), standard (povidone iodine treated group) and the test group viz. methanolic extract (2% w/w). It is noticed that wound healing power of rats treated with ointment containing  2 % (w/w) methanolic extract was found to be significantly higher (P<0.001) on day 16th  as compared to control group. The epithelization period was also found to be of 21 days in case of animals treated with ointment containing 2% (w/w) methanolic extract.

Incision Wound Study: The results of wound healing activity by incision wound model are presented in Table 2, Fig. 4. This study was evaluated by measuring the tensile strength of the incision wound of different groups viz. control treated with simple ointment base B.P., standard group treated with drug povidone iodine and the test group treated with highest concentration of methanolic extract. The results are presented as mean weight in gram ± SEM. The rats treated with ointment containing 2 % (w/w) methanolic extract indicated significantly strength (35.90±2.43) as compared to control group (16.14±2.84).

CONCLUSION: The present study was aimed to minimize tissue damage and provide an adequate tissue perfusion and oxygenation, proper nutrition and moist wound healing environment to restore the anatomical continuity and function of the affected part. In the present study, rats were treated with Nyctanthes arbor-tristis methanolic extract 2% w/w ointment for 16 days period, taking observation in every 4th day. It was noticed that complete epithelization of both the wound models takes about 16 days. This is the period of complete healing of wound. Thus, it can be conclude that the plant extract at 300 mg dose/kg b.w. can be a good solution for the healing of both the wounds. Thus, the folklore claim for the use of Nyctanthes arbor-tristis leaves in healing of the wounds can be justified by the present study.

ACKNOWLEDGEMENTS: Authors are grateful to Govt. of Madhya Pradesh, Department of Higher Education, for providing financial support in my work.