WOUND HEALING ACTIVITY OF THE PLANT OF BALIOSPERMUM MONTANUM WILLD.

WOUND HEALING ACTIVITY OF THE PLANT OF BALIOSPERMUM MONTANUM WILLD.

The plant of Baliospermum monta

The traditional medicine system is holistic in that its application usually covers the mind, body and soul 4. The concept includes mystical and magical rituals, herbal therapy, psychiatry and other treatments, which may not be explained by modern medicine 5. Studies suggest that this therapy is applied to conditions such as cancer, arthritis, chronic back pain, gastrointestinal problems, chronic renal failure, eating disorder, physical, mental or social disease and so on. Herbal medicine is currently enjoying a revival in popularity in the west and in fact it is the primary form of medicine in many parts of the world 6.

With the great reliance on this type of medicine, it becomes pertinent to search for potent, effective and relatively safe plant medicines as well as scientific validation of the success claims about plants already in use by traditional medicine practitioners in order to enhance their safety and efficacy 6. These are some of the problems making this alternative healthcare system less acceptable, especially by orthodox medicine practitioners 7. Although many Traditional Medicines or Complementary Alternative Medicine (TM/CAM) therapies have promising potential, and are increasingly used, many of them are untested and their use is not monitored 8. As a result, knowledge of their potential side effects is limited 9. This makes identification of the safest and most effective therapies and promotion of their rational use more difficult10.

Plant Material: Baliospermum montanum was collected from Barabanki District U.P. in the month of September 2009 and were authenticated by Dr. Tariq Husain (Head & Scientist Herbarium), National Botanical Research Institute, Lucknow with accession no. 97306.

Animals: Albino rats (Either six) procured from the disease free animal house, Institute of Pharmacy Bundelkhnad University, Jhansi with reference no of BU/PHARM /IAFC/09/002. The rats were fed a standard diet and water. A group of six rats (150-200g) each were used in all set of experiments4.

Preparation of Extract: In the present study the plant of Baliospermum montanum (Willd) were dried and shade around 900g were reduced to powder and was subjected to hot continuous extraction in soxhlet extractor successively with petroleum ether and ethanol (95%). Each extract was the concentrated by distilling of the solvent and than evaporated to dryness on water bath. All the extracts were kept in desiccators and stored in a refrigerator for chemical and pharmacological studies 5.

Wound healing studies: Albino rats of ether six weighing (150-200 g) were selected and divided into    four group of six each. Animal were depilated at the desired site before wounding. They were housed individually with free access to food and water the basal food intake and body weights to nearest gram were noted the animal were staved for 12 hours prior to wounding under light anesthesia sterilizing the area with ethanol performed wounding. The first group of control and given the vehicle (Gum Acacia 5%) orally. Third and fourth group of animal give ethanolic and petroleum ether extract by oral route and compared with second group standard drug i.e. 0.2% Furamycetin ointment.

Excision wound: In this model four groups of animal and containing at least six in one group are anaesthetized with anaesthetic ether, rats are depilated on back; one excision is inflicted of 500 mm2 full thickness of skin of pre determined area 11. Rats are undressed to the open environment then the drug i.e. the standard drug 0.2% furamycetine ointment. Control and test drug ointment and other forms of drug are administrated till the wound is completely healed this model is used to monitor wound contraction and epithiliazation time. The observations of percentage wound closure were made on 4th, 8th, 12th, 16th days post wound day and also for epithiliazation and size of scar area 12 (table 1). 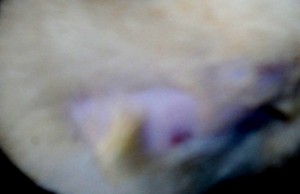 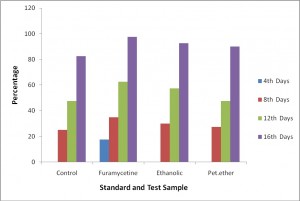 RESULT & DISCUSSION: The effect of ethanolic and petroleum ether extracts of Baliospermum montanum were screened on excision wound model with the control and reference standard furomycetine treated animal.