INTRODUCTION: Polycystic ovary syndrome is a complex multifactorial endocrinopathy affecting a substantial population of reproductive aged women and is the most common cause of infertility 1. Genetics and lifestyle may develop the main features of PCOS 2. Women diagnosed with PCOS are usually presented with hyper androgenism, ovulatory dysfunction, and polycystic ovaries 3.

Obesity and insulin resistance frequently occur in women with PCOS; increasing the risk for to metabolic complications such as type 2 diabetes, hypertension, hyperlipidemia and fatty liver 4. The main features of PCOS, first defined by Stein and Leventhal 5 include androgenic features, menstrual dysfunction, and polycystic ovaries. PCOS diagnosis according to the national institute of health (NIH) consensus, necessitates the existence of oligo- or amenorrhea and hyperandrogenaemia without a known disorder that explain the cause of hyperandrogenaemia 6. The Rotterdam criteria define PCOS by the presence of two of the three following features: hyperandrogenaemia, oligo- or amenorrhea and polycystic ovaries by ultrasound imaging 7.

The major therapeutic strategies in the management of PCOS are aimed to control hyperandrogenism and decrease insulin levels and insulin resistance. Insulin sensitizers (e.g. metformin), antiandrogenic agents (e.g. cyproterone) and combined oral contraceptive pills are the most common pharmacological products used in PCOS treatment 8, 9. Metformin use in women with PCOS causes a decrease in androgen levels and improvement of hyperinsulinemia and menstrual irregularity 8.

Zinc is an essential trace element required as a structural, catalytic, and regulatory ion for many enzymes, proteins and transcriptional factors activities. As a result, zinc plays an important role in many homeostatic response of the body (e.g. oxidative stress) and in many biological functions (e.g. immune deficiency). Zinc also demonstrated multiple roles as a modulator of inflammation in cell cultures and animal model. Zinc supplemen-tation improve inflammatory reaction in PCOS patients 10.

Copper is an essential trace element that is important to the proper functioning of organs and metabolic processes. Copper has an antioxidant action that protect cells from damage, and is also a component of many enzymes that is responsible for the release of energy from carbohydrates, fat and protein. Copper is also important for formation of red blood cells, bone and connective tissues. PCOS may result in dysregulation of systemic copper homeostasis 11. The present study was conducted to investigate the correlation between zinc and copper levels with PCOS related biochemical parameters.

MATERIALS AND METHODS: Twelve women with an age range of 20 - 35 years; body mass index of 30.9 ± 1.6 kg/m2 with PCOS without pharmacological treatment were included in the study. The classic criteria of chronic an ovulation and hyperandrogenism were used in the diagnosis of PCOS 8. Ten healthy and normal ovulatory women with the same age range of PCOS women were included. The normal women were selected on the bases of having normal ovulatory menstrual cycles and not having signs and symptoms of androgenization (e.g. hirsutism). The study was conducted in the Specialized Center for Diabetes and Endocrinology, Al-Rusafa, Baghdad. Consent was signed by all participants and study protocol was approved by the Committee for Medical Ethics. Subjects having contraceptive pills or other hormonal medications or breastfeeding their babies were excluded from the study. Fasting blood samples were withdrawn from PCOS women at random days. For healthy women, blood samples were obtained during the follicular phase of the cycle. Blood samples used for progesterone assay were withdrawn in 21st day of the cycle (luteal phase). After preparation of serum, the levels of luteinizing hormone (LH) 12, follicle stimulating hormone (FSH) 13, progesterone, testosterone and prolactin 14 were analyzed by enzyme linked immunosorbent assay (ELIZA) according to standard procedures. Serum zinc and copper were analyzed using an atomic absorption spectrophotometer.

Data analysis was performed by GraphPad PrismV 5.01 software. All results were described as mean ± SEM. Student (t) test was performed for comparison and Pearson's correlation coefficients (r) were calculated to quantify the correlation between the biochemical parameters in the study. P <0.05 was considered statistically significant. P value with one star (*) represents significance and P value with more stars represents higher significance.

RESULTS: Fig. 1 - 8 display the mean values, standard deviation error bars and P value summaries (represented by stars) of all of the biochemical parameters in controls and PCOS patients. 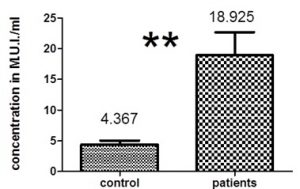 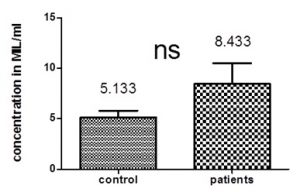 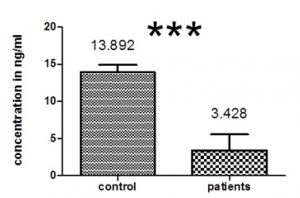 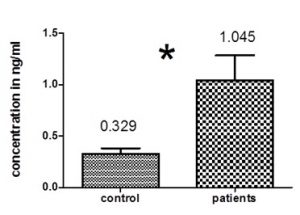 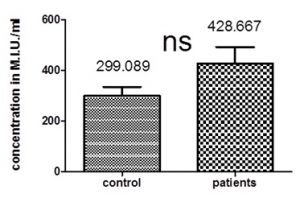 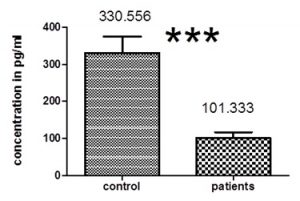 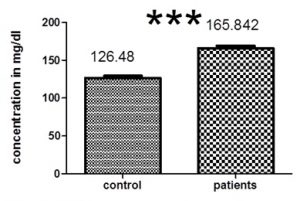 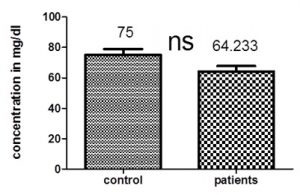 TABLE 1: CORRELATION OF ZINC AND COPPER WITH OTHER BIOCHEMICAL MARKERS IN PCOS

Copper is an essential trace element and co-factor for many enzymes capable of changing between the oxidized Cu2+ and the reduced Cu+ state. Cu catalyzes the synthesis of highly reactive oxygen species (ROS) that causes oxidative damage to proteins, lipids, DNA and other molecules 17. Either Cu deficiency or excess or can lead to disease or affect the development of disease 18.

High copper levels impair thyroid function, which contributes to PCOS and infertility 19. A recent report recorded that diabetics have elevated levels of copper and it could be that copper is in fact linked to metabolic syndrome and diabetes 1. A meta-analysis involving three studies 18 - 20 addressing copper relationship with PCOS concluded that copper levels were found to be higher in women with PCOS than in controls 21.

The results showed that there is no correlation between copper and the rest of the biochemical parameters related to PCOS women. The study also revealed that there is no significant difference in serum copper concentration between healthy and PCOS women. Although there were three previous studies that showed higher copper levels in PCOS group than healthy group 18 - 20, a recent study 22 showed no significant difference in copper levels as well between the two groups.

Zinc may be related to the development of polycystic ovarian syndrome and its long term metabolic complications via its important role in the metabolism of glucose and the synthesis, secretion, and signaling of insulin. In addition, zinc may be related to PCOS through its antioxidant effect 10, 24. The deficiency of such a potent antioxidant such can cause an increase in oxidative damage in multiple organs, such as the heart. A deficiency in zinc also increases the risk for hypertension and atherosclerosis. Serum zinc levels have a tendency to be lower in patients with PCOS with impaired glucose tolerance 25.

The results revealed that there is no correlation between zinc and the other biochemical parameters of PCOS. Furthermore, the current study revealed an increase in serum Zn concentration in PCO group. A previous study found that serum Zn levels were significantly higher, in patients with PCOS compared with the healthy group (p < 0.01) 20. This increase may be associated with disturbance of glucose metabolism represented by insulin resistance, dyslipidemia and endocrine disturbance leading to oxidative stress and finally increase Fe, and Zn. Many evidence shows that higher body zinc and iron stores are related with high risk of other insulin resistance disorder (e.g. high blood glucose and hyperlipidemia) 1.

A possible explanation for the increased zinc levels could be due to compensation. Antioxidant defense system being in a hyperactive state in order to compensate for the amount of oxidative stress within the body this result in consistent with other models comparing the antioxidant capacity 26. Superoxide dismutase (SOD) activity has increased significantly in patients with PCOS compared to control. SOD is an essential antioxidant enzyme and its over - expression might be an adaptive response to oxidative stress 27. Total antioxidant status was observed to be higher in non-obese women with PCOS 23. Hyperandrogenism is the most common biochemical feature in PCOS women. 70 - 80% of hyperandrogenism causes is related to PCOS and is associated with high serum testosterone levels. Hyperandrogenism may manifest as acne, hirsutism, and male pattern alopecia. It is not known whether hyper-androgenemia affects antioxidant status PCOS women 28.

CONCLUSION: The present study concluded that there is no correlation between zinc and PCOS biochemical parameters. However, the results revealed significantly higher zinc concentrations in PCOS patients than control, suggesting a relationship involving oxidative stress between high zinc concentration and PCOS. Regarding copper, the evidence produced is not decisive, but suggests that additional studies are need in order to obtain new insights into PCOS.

ACKNOWLEDGEMENT: The authors gratefully thank the staff of Specialized Center for Diabetes and Endocrinology for their technical assistance.

Department of Pharmacology and Toxicology, College of Pharmacy, University of Kerbala, Kerbala, Iraq.