ABSTRACT: Metal oxide in the nanorange acquires distinctive properties that depend on size, chemical composition and surface chemistry. Among the metal oxide nanoparticles, the zinc oxide nanoparticles (ZnO NPs) are commonly used for their antimicrobial properties. ZnO nanomaterials are incorporated into a variety of skin coatings because of their antimicrobial and/or antifungal properties. Most of the future therapeutic applications of NPs are based on intravenous/oral administration. Experiments on their interaction with blood components especially erythrocytes are of immense importance, if the nanoparticles are to be administered intravenously. Haemolytic potential of ZnO NPs was assessed spectrophotometerically as well as by phase contrast microscopy. In our study, interaction of different concentrations of ZnO NPs with erythrocytes revealed absence of hemolysis by spectrophotometric method. On the other hand, phase contrast microscopic examination revealed concentration dependent clustering of erythrocytes. The detailed investigation about interaction of erythrocytes with ZnO NPs is needed before their clinical applications.

INTRODUCTION: Nanotechnology has come to the forefront of research in the past decade and has the tremendous potential to revolutionize the livestock sector. Nanoparticles have been used for different sort of applications right from production to treatment in livestock sector 1. Remarkable efficacy was noted in targeted delivery of antimicrobials 2, anti-neoplastic 3, analgesics 4 and anti-inflammatory agents 5 by using the nanoparticles. Although nanoparticles possess novel properties that make them available to a vast range of applications, the questions regarding their safety arise when these come in contact with the biological systems 6.

ZnO is considered to be “GRAS” (generally recognized as safe) substance by the FDA but GRAS designation mostly acceptable to materials in the micron size range, when these substances are reduced to nanoscale, they may develop new actions of toxicity. Toxicity of ZnO NPs has been extensively studied and they have been shown to affect many cell types and animal systems 7-12. Most of the future therapeutic applications of NPs are based on intravenous/oral administration 13. Experiments on their interaction with blood components are of immense importance, if the nanoparticles are to be administered intravenously. The present paper deals with the haemolytic potential of zinc oxide nanoparticles.

ZnO NPs synthesized by method standardized in our lab were used in this study. PBS containing 10% dimethylformamide (DMF) was prepared (Solubilising buffer). ZnO NPs (10mg) were dissolved in 1ml of solubilising buffer and after sonication, two fold serial dilutions were prepared using the same solution.

Assessment of haemolysis by spectrophotometer:

Haemolytic potential of ZnO NPs was analysed spectrophotometerically as described previously with some modification14. Twenty micro litre (µl) of RBC suspension was added to 96 well plates to which 180 µl of drug dissolved in solubilising buffer from each concentration was added. For complete haemolysis the cells were suspended in 180 µl of distilled water (Positive control). For negative control cells were suspended in PBS containing 10% DMF.

Plate was incubated at 37⁰C for 90 min after that contents were transferred to eppendorf tubes and centrifuged at 3000 rpm for 5 min. Supernatants were directly transferred to new 96 well plate by using multipipette. Optical density (OD) of each well was taken at 543nm by using UV Spectrophotometer. The percentage haemolysis caused by the drug at a given concentration was calculated by using the following formula

Haemolytic properties of ZnO NPs were assessed by phase contrast microscopy as described previously with some modification15. Blood sample was collected from adult Marwari horse and centrifuged at 1200rpm for 10min. The supernatant was discarded and equal volume of PBS was added to the sediment and centrifuged for 4times to obtain clear RBC pellet. RBC suspension was prepared by diluting twenty times in PBS. Two fold serial dilutions of ZnO NPs were prepared in 1ml of PBS. Ten µl of drug samples were mixed with 50 µl of final RBC suspension and kept at 37⁰C in incubator. After 24 hr of incubation, blood smears were prepared out of the sample and examined under phase contrast microscope along with control. 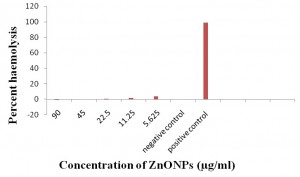 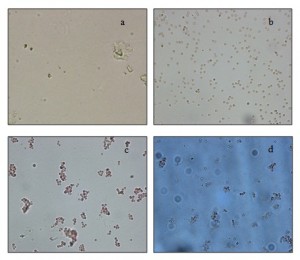 DISCUSSION: This study demonstrated that ZnO NPs did not have any haemolytic property by spectrophotometric method. On the other hand, concentration dependent clustering of RBC was noted in phase contrast microscopic examination. This clustering may interfere with physiological gas exchange mechanism. The pathological changes induced by ZnO NPs mainly depend on size and dose 16. The size of ZnO NPs used in this study was less than 20 nm. Therefore, detailed investigation of interaction between ZnO NPs (size, dose) and RBC should be studied in in vitro and in vivo before their therapeutic usage.

CONCLUSION: Hemolysis (destruction of red blood cells) results in various pathological conditions including anemia, jaundice etc. The hemolytic potential of all intravenously administered drugs should be evaluated. In the present investigation, interaction of different concentrations of ZnO NPs with horse erythrocytes revealed the absence of hemolysis by spectrophotometric method. While, phase contrast microscopic examination revealed concentration dependent clustering of erythrocytes. The detailed investigation about interaction of erythrocytes with ZnO NPs is required before their clinical applications.

COMPETING INTERESTS: The authors declare that they have no competing interests.