ABSTRACT: The NSAIDs are popular in reducing acute and chronic inflammation as they have no abuse liability. QSAR (Quantitative structure-activity relationship) approach is a very useful and widespread technique for drug design. 2D QSAR models are based on descriptors derived from a two-dimensional graph representation of a molecule. The 2D QSAR study was performed on selected twenty-four compounds from synthesized indole derivatives for elucidating the structural requirements for COX-2 inhibition using multiple linear regression method. Statistically, significant models were generated using VLife Molecular Design Suite 3.5 software. The physicochemical parameters contributed significantly to biological activity. Amongst all the models generated, model 3 was found to be best with high r2 (squared correlation coefficient) of 0.9382. Model is robust as q2 (cross-validated squared correlation coefficient) value is also high as 0.8557 with good predictive power as indicated by pred_r2 = 0.7443. The model showed two alignment independent (AI) descriptors T_2_O_0 and T_2_N_7 as well as two physicochemical descriptors –ve Potential Surface Area and SA Most Hydrophobic contributing for activity. The present study may prove to be helpful in the development and optimization of existing indole derivatives as anti-inflammatory agents with selective COX-2 inhibition.

INTRODUCTION: NSAIDs inhibit cyclo-oxygenase (COX), the enzyme responsible for the conversion of arachidonic acid to prostaglandins. COX exists in 2 isoforms. COX-1 is a ubiquitous constitutive isozyme producing prostaglandins responsible for homeostatic functions such as maintenance of GI mucosal integrity. COX-2 is largely a cytokine-induced isozyme producing prostaglandins that mediate pain and inflammation 1. NSAIDs inhibit both COX-1 and COX-2 to varying degrees.

Thus, the therapeutic effects of conventional NSAIDs are derived from the inhibition of COX-2, while the adverse effects of these agents, particularly in the upper GI tract, arise from inhibition of COX-1 activity 2. Much recent effort thus has been made to produce selective inhibitors of cyclooxygenase-2 (COX-2) in the belief that these will lack the gastrointestinal damaging effects of traditional non-steroidal anti-inflammatory drugs (NSAIDs) 3, 4, 5.

The computer-aided prediction of biological activity about the chemical structure of a compound is now a commonly used technique in drug discovery. Computational chemistry represents molecular structures as a numerical model and simulates their behavior with the equations of quantum and classical physics. Available programs enable scientists to easily generate and present molecular data including geometries, energies, and associated properties (electronic, spectroscopic, and bulk). The usual paradigm for displaying and manipulating these data is a table in which compounds are defined by individual rows, and molecular properties (or descriptors) are defined by the associated columns 13, 14, 15.

QSAR (Quantitative structure-activity relationship) attempts to find consistent relationships between the variations in the values of molecular properties and the biological activity (% activity, IC50, ED50, MIC) for a series of compounds to generate a mathematical expression so that these rules can be used to evaluate new chemical entities. The mathematical expression can then be used to predict the biological response of other chemical structures. 2D QSAR models are based on descriptors derived from a two-dimensional graph representation of a molecule.

A QSAR generally takes the form of a linear equation:

The structures of all the compounds were drawn in ChemDraw ultra 8.0 software in Mol format (mol file). These structures were imported in VLife MDS 3.5 software and converted to the mol2 format. Energy minimization was performed of each 3D model using Merck Molecular Force Field (MMFF) until the root mean square gradient values becomes smaller than 0.0001 kcal/mol Ao. For optimizing molecules using VLife MD, the set selected was ‘Maximum number of cycles = 10000, convergence criteria (RMS gradient) = 0.01’. The distance-dependent function in the dielectric properties field was checked. 1.0 value was entered as constant. From force field drop down list MMFF was selected as a force field. Analytical as gradients type option was selected. In advanced button Non Bonded Cut Off dialog box, the values entered are as: Electrostatic as 20.00, vdW as 10.00 and vdW after iterations as 10.

Calculation of Descriptors for QSAR: The 2D QSAR was launched by picking Modules in an appropriate sequence as per the manual. By selecting the QSAR Tool ‘Calculate Descriptors’ various physicochemical descriptors were selected. For performing QSAR analysis, descriptors that show variation for all the molecules are required. As the descriptors that were constant for all the molecules were not considered to contribute to QSAR and hence removed from the worksheet. Training and test set from the data were selected by manual selection method, ensuring the molecules have uniform spread (train and test) in terms of both activity and chemical space. In the generation of the QSAR model, we have selected eight molecules in test and sixteen in the training set. Table 2 all calculations were run on a Pentium IV personal computer with the window XP operating system. Total of 213 Descriptors was evaluated.

TABLE 2: LIST OF SETS OF TRAINING AND TEST COMPOUNDS FOR QSAR STUDIES

Then data selection was done considering the negative log of IC50 values under the dependent variable and the remaining variables considered as independent. Regression methods selected were Multiple and Forward-Backward as the Stepwise Variable Selection from the Select Variable Selection Method panel. Stepwise parameter setting was done as cross-correlation limit =0.5, number of variable in final equation = 4, term selection criteria as r, F test in as 4 and F test out as 3.99. Additional parameter settings as: Variance Cut-Off = 0, Scaling option = Auto Scaling. The best model was selected based on various statistical parameters such as squared correlation coefficient (r2), standard error of estimation (SE), sequential Fischer test (F). Quality and predictability of the model were estimated from the cross-validated squared correlation coefficient. The various 2D-QSAR models were developed using the MLR method. 2D-QSAR equations were selected by optimizing the statistical results generated along with a variation of the descriptors in these models. The fitness/pattern plots were also generated for evaluating the dependence of the biological activity on various types of descriptors Fig. 1. 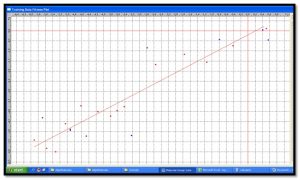 FIG. 1: FITNESS GRAPH OF OBSERVED AND PREDICTED IC50 DATA FOR ALL 24 COMPOUNDS DERIVED FROM MODEL NO. 3 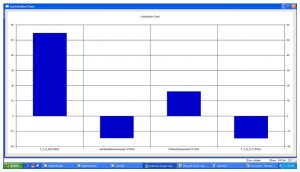 RESULTS AND DISCUSSION: The results of in-vitro COX inhibition assay on the most active twenty-four molecules from all the series shows that these compounds are more selective towards COX-2 than COX-1. Compound IIA3, IIB2, and IIB4 from series II showed selectivity index of 54.60, 56.70 and 52.54 for COX-2 vs. COX-1. The compounds IIIB11 and IIIB17 from series III also showed a selectivity index of 29.75 and 35.27, respectively. The remaining compounds in series IA, IB, IIIA and IIIB have shown less selectivity index as compared to compounds in IIA and IIB series. The results show that the presence of a sulfonyl group in series IIA and IIB is favorable for maximum drug-receptor interactions. In the compounds IIIB11 and IIIB17, presence of hydrogen bonding groups is important for optimum drug-receptor interactions Table 3.

a Values are means of two determinations acquired using an ovine COX-1/COX-2 assay kit and the deviation from the mean is <10% of the mean value. b In-vitro COX-2 selectivity index (COX-1 IC50/COX-2 IC50).

2D-QSAR Equation Interpretation: Among the generated QSAR models; model 3 was selected based on various statistical parameters such as squared correlation coefficient (r2), which is a relative measure of the quality of fit.

Interpretation of Model 3: Several models were generated for 2 D QSAR model development. Model 3 was found to be best with high r2 of 0.9382. Model is robust as q2 value is also high as 0.8557 with good predictive power as indicated by pred_r2=0.7443. The model showed two alignment independent (AI) descriptors T_2_O_0 and T_2_N_7 as well as two physicochemical descriptors -ve Potential Surface Area and SA Most Hydrophobic contributing for activity. From the derived QSAR model, it can be concluded that anti inflammatory activity of indole derivatives is strongly influenced by physicochemical descriptors.

SA Most Hydrophobic is the most hydrophobic value on the vdW surface, which is positively contributing (16.18%) indicates that more bulky groups will further increase the activity by increasing surface hydrophobicity.

TABLE 4: INTERCORRELATION MATRIX OF DESCRIPTORS USED IN MODEL NO. 3

The plot of observed versus predicted activity provides an idea about how well the model was trained and how well it predicts the activity of the external test set Table 5 and Table 6. From the plots it can be seen that the model is able to predict the activity of training set quite well (all points are close to regression line) as well as external test set up to 62% (only few points are relatively apart from the regression line) providing confidence in predictive ability of the model Fig. 1.

CONCLUSION: The present work describes the 2D QSAR study which generated an equation which signifies that the count of number of double bounded atoms separated from oxygen atom by 0 bonds in a molecule is positively contributing thus indicating double bonded oxygen atoms should be more for increasing activity and total van der Waals surface area with negative electrostatic potential of the molecule contributing negatively indicating that negative electrostatic potential on surface should be reduced by attaching electron donating groups.

It also signifies that most hydrophobic value on the vdW surface positively contributing and thus indicating that more bulky groups will further increase the activity by increasing surface hydrophobicity. It further signifies the count of the number of double bounded atoms (i.e. any double bonded atom, T_2) separated from nitrogen atom by seven bonds in a molecule which is negatively contributing (-14.65%). Thus, the results obtained can be used for further modification and optimization of the indole derivatives for better anti-inflammatory activity with selective COX-2 inhibition.

ACKNOWLEDGEMENT: The authors are grateful to Principal Dr. Ashok V. Bhosale for providing infrastructure and facilities to conduct the research activity. We are also thankful to VLife Sciences for providing technical support from time to time.