ABSTRACT: In recent years, the extensive use of antibiotics has resulted in their frequent detection in the effluent discharge of wastewater discharge plants (WWTPs). In this study, the feasibility of using Surfactant-Modified Kaolinite (SMK) to remove the antibiotic, Ciprofloxacin (CIP) from wastewater was evaluated from batch experiments. The batch adsorption system was utilized to evaluate the CIP removal efficiency at different contact times, SMK dosages, and CIP concentrations. The experimental data were analyzed by the Langmuir, Freundlich, Temkin, and Dubinin–Radushkevich (D–R) isotherm models. R2 values of Langmuir and D–R isotherm models are higher than that of other models, and maximum monolayer coverage (qmax) was calculated as 61.82 mg/g. The separation factor of 0.495 indicated favorable sorption. Also, from the Freundlich isotherm model, the intensity of adsorption (n) that indicated favorable sorption was 2.954. The kinetic study of sorption indicates that the pseudo-second-order model provides a better correlation of the sorption data than the pseudo-first-order, confirming the chemisorption of CIP ions on SMK. The results showed that a significant increase in CIP sorption capacity could be achieved as the loading level of Cethyltrimethylammonium bromide (CTAB), a cationic surfactant, on kaolinite surface exceeds monolayer coverage.SMK shows promise to be an effective bio adsorbent for the removal of CIP from an aqueous solution. The adsorption involved is physisorption, which is best described by D-R isotherm.

INTRODUCTION: Antibiotics are substances that can effectively inhibit the growth of pathogens 1, 2. At present, a large number of antibiotics are used not only to treat human and animal diseases but also in poultry feeding and aquaculture 3, 4. Antibiotics play a very important role in the prevention of diseases and growth promotion 5.

However, extensive use of antibiotics has resulted in their frequent detection in the effluents of wastewater treatment plants (WWTPs) 6, 7. Many commonly used antibiotics do not biodegrade easily and persist in the environment as potent pollutants and hence have attracted increasing concern in recent years 7, 8. Since most antibiotics, including Ciprofloxacin are poorly metabolized and absorbed by humans and animals, large fractions are excreted through urine and faeces as unmodified parent compounds 9, 10.

Residues of these antibiotics discharged from agricultural runoff, and municipal wastewater treatment plants are frequently detected in soil, surface water, groundwater, and even drinking water 11, 12. Due to leaching from agricultural fields, these residues could threaten surface water and groundwater quality 13. The widespread use of antibiotics has become a serious problem as it has several potential adverse effects, including acute and chronic toxicity, impact on aquatic photosynthetic organisms, disruption of indigenous microbial populations, and dissemination into antibiotic-resistant genes among microorganisms 14, 15.

CIP is a zwitterionic antibiotic categorized as a second-generation fluoroquinolone, which can effectively act against a wide range of gram-negative and gram-positive bacteria 16. Due to its increasing use, large quantities of effluents containing CIP have been discharged into the environment. The excessive existence of CIP in the aquatic environment can lead to increased antibiotic resistance among bacteria and adverse effects on water quality 17, 18. Thus, the removal of CIP from water has become an increasingly important and necessary task

Though the removal of antibiotics from pharmaceutical wastewater is quite expensive, it is essential that wastewater must be treated properly prior to its release into the environment19. Among the available processes for the treatment of wastewater containing antibiotics, the adsorption process is considered as the most effective and efficient method 20. The main drawback of adsorption process for wastewater treatment is the cost of the adsorbent. Commercially available adsorbents such as activated carbon are expensive 21. If inexpensive and abundantly available materials are found in nature as the alternative adsorbents, the adsorption process offers a very attractive and economical method for environmental remediation 22.

Clay minerals have gained a lot of attention as adsorbents , catalysts and biomaterials due to their large surface area, considerable cation exchange capacity (CEC), the presence of both Bronsted and Lewis acidity and  low cost. Among the clay minerals, Montmorillonite and Bentonite have received the most attention 23-25. Therefore, there is a lot of scope for the exploration of kaolinite clay mineral as an adsorbent.

Literature reports indicate the use of kaolinite clay minerals for the removal of pollutants from aqueous effluents. For example, iron-manganese oxide-coated kaolinite was successfully used to remove Crystal violet, Direct red 81, and Congo red from water 26-29.

In the present study, Surfactant Modified Kaolinite was used to remove CIP antibiotic from aqueous solutions in batch adsorption experiments. Factors including adsorbent dose, contact time, initial concentration of CIP, and pH, which inﬂuence the adsorption was investigated in detail to explore the possible mechanism of adsorption.

Reagents and Solutions: Ciprofloxacin antibiotic (CIP) (molecular weight 331.34 g/mol, CAS Number 85721-33-1, wavelength (275 nm) and molecular formula C17H18FN3O3) was procured from Sigma Aldrich Co. Fig. 1. A stock solution containing 1000 mg/L of the CIP was prepared by dissolving CIP in distilled water and suitably diluted to get the solutions of the desired concentration (10, 25, 50, and 100 mg/L). 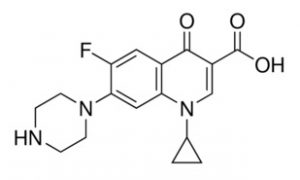 Surfactant-Modified Kaolinite: Kaolinite was synthesized according to the following procedure: 2.0 g of natural Kaolinite was dispersed in 10 mL of distilled water containing CTAB. The suspension was then stirred at 60 °C for 15 min and dried in a microwave oven at 600 W for 5 min. The treated Kaolinite was repeatedly washed with deionized water to remove CTAB superficially adsorbed on its surface. The modified Kaolinite was then dried in an oven at temperature 105 °C for 4 h.

Batch Adsorption Experiments: Batch adsorption was employed in the present study, and the most effective factors for the adsorption process including contact time (10-100 min), pH (3-11), adsorbent dose (0.2-3.0 g/L), and initial concentration of CIP (10-100 mg/L) were assessed. The optimum pH was determined by varying the pH in the range 3-11, keeping all other parameters constant. The experiments were performed in 100 mL beakers at a constant concentration of CIP. Then this mixture was shaken using a shaker with 150 rpm at 30 °C. HCl and NaOH were used to adjust the pH of the solution.

The removal efficiency (R, %), the adsorption capacities at equilibrium, (qe, mg/g), and at time t, (qt, mg/g) were calculated using the following equations30:

Effect of Adsorbent Dose: The effect of SMK dosage on the amount of CIP was determined by batch method, at 100 mg/L CIP, 30 ± 2 °C, and pH = 6.5 ± 0.3, 150 rpm and contact time 60 min. It is evident from Fig. 2 that the amount of CIP absorbed increases with the increase in the adsorbent dose from 0.2 to 1.5 g/L, and removal % increases from 52.42 to 98.56. The subsequent fall in removal percentage with an increase in adsorbent dosage may be due to the adsorption sites getting saturated during adsorption. Hence the optimum dosage can be taken as 1.5 g in all calculations31-32. Even at high SMK dosages, the adsorption does not improve due to the interference between binding sites and reduced mixing at high adsorbent densities, as depicted in Fig. 2 33. Therefore, it is suggested that the removal of CIP ion should be carried out using a small amount of adsorbent rather than a large quantity of adsorbent. 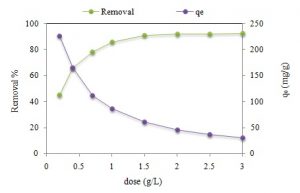 Effect of pH: In the sorption process, the pH of the sorbate has an important role because it affects the charge on the functional groups of biosorbent as well as their dissociation on active sites. It also influences the sorbate solubility as well as its degree of ionization 34, 35. The sorption of CIP on SMK was studied at pH 3-11 with a difference of single unit value, while all other parameters were kept constant. 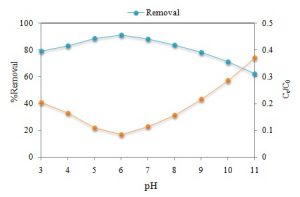 Fig. 3 shows that the sorption of the CIP on SMK increases with increasing pH from 3 onwards and attains a maximum at pH 6, and decreases up to pH 11. At low pH values, the species of CIP that are present are in their cationic form, favoring the adsorption on negative charged SMK surface by cation exchange of CIP+ for the natural cation within the SMK interlayer. This is the adsorption mechanism that is proposed and widely reported for adsorption of cations on SMK 36, 37.

Sorption kinetics: Fig. 4 illustrates the effect of contact time on the sorption of CIP on SMK. The CIP adsorption (uptake) was found to increase rapidly with the increase in contact time, and the optimum percentage adsorption of the CIP was found to occur at 60 min, achieving the % removal of 98.56, after which it remained constant for the rest of the adsorption period. The slow rate of adsorption by the adsorbent may be attributed to the lack of available vacant active sites on the adsorbent to accommodate the CIP species present in the solution 38, 39.

In general, the initial rate of adsorption was fast, and then the slow adsorption follows as the number of available adsorption sites slowly decreases 40, 41.

Therefore in this study, the optimum contact time for CIP adsorption on the SMK was fixed at 60 min as represented in Fig. 4. 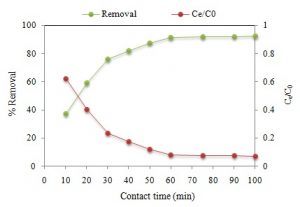 The pseudo-second-order model is given by equation43given below:

Where k2 is the pseudo-second-order rate constant (g/mg.min). The above-mentioned models basically include all steps of sorption such as external film diffusion, sorption, and internal particle diffusion; hence they are pseudo-models. The parameters in these two models are determined from the linear plots of ln (qe−qt) versus t Fig. 5 and t/qt versus t Fig. 6, respectively Table 1. It is found that the correlation coefficients for the pseudo-first-order model are not high for CIP sorption on SMK; moreover, the qe values calculated from the pseudo-first-order model are not consistent with the experiment data. However, good correlation coefficients are obtained by fitting the experimental data to pseudo-second-order, indicating that the sorption process for CIP is of the pseudo-second-order. Fig. 6 also shows the typical curves in relation to the sets of data calculated from the rate constants of the pseudo-second-order model. The agreement between the sets of data reflects the extremely high correlation coefficients obtained and shown in Table 1.

Where k is the rate constant of intra-particle diffusion (mg/g min−0.5) and is determined from the linear plot of qt versus t0.5. In theory, such types of plots may present multi-linearity, indicating that two or more steps may occur. The ﬁrst sharp portion is the external surface sorption or instantaneous sorption stage (Stage 1). The second portion is the gradual sorption stage (Stage 2), where intra-particle diffusion is rate-controlled. The third portion is the ﬁnal equilibrium stage (Stage 3), where intra-particle diffusion starts to slow down due to extremely low solute concentrations in the solution. Results of this analysis on the CIP data are illustrated in Fig. 7 as plots of qt versus t0.5. The constant rate values (k) are shown in Table 1. 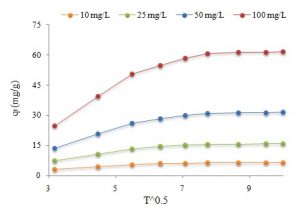 FIG. 7: INTRA-PARTICLE DIFFUSION PLOTS FOR THE ADSORPTION OF CIP ON SMK

TABLE 1: THE RESULTS OF KINETIC MODEL STUDIES RELATED TO CIP ADSORPTION ON SMK

Adsorption Isotherms: The CIP ion distribution between the liquid and solid phases can be described by mathematical model equations such as the Langmuir isotherm, Freundlich isotherm, Dubinin–Radushkevich, and Temkin. These models are used because of their ability to describe experimental data over a wide range of concentrations. All four isotherm models can be easily transformed into linear forms, just by linear regression.

As shown in Table 2, in the present study, the data points in equilibrium models give a much better fit to the Dubinin–Radushkevich (D–R) isotherm. Contrary to Langmuir or Freundlich's models, the D–R isotherm does not assume a homogeneous surface, constant sorption potential or even a two-dimensional adsorbate layer on the surface. The D–R model considers that the adsorption occurs in multiple-layer mode and involves van der Waals forces. The D-R isotherm also is temperature and concentration-dependent.

ACKNOWLEDGEMENT: The authors would like to acknowledge the help and support received from Zahedan University of Medical Science, Iran.

COMPETING INTEREST: Authors have declared that no competing interests exist.