ABSTRACT: The present study aims to reveal the anti-inflammatory activity of the ethanolic plant extracts of Merremia tridentata against murine models. The Wistar Albino rats of mixed sex were induced inflammation via injecting histamine and formalin. The anti-inflammatory effect of Merremia tridetata was compared with the presence of positive control, Indomethacin. The Paw volume of the control group (group I and group II) have revealed the following mean and standard deviation values of 7.91±0.22 ml and 5.66±0.27 ml, respectively. Whereas the minimum and maximum dosages of plant extracts have shown the values 6.1±0.29 (200 mg/kg) and 5.49±0.18 ml. similarly, the histamine and Indomethacin control group I have revealed the following values 7.96±0.2 ml (group I) and 6.02±0.53 ml (group II). Likewise, the minimum and maximum dosage of plant extracts have revealed the maximum anti-inflammatory effect with the following values 6.30±0.60 ml (200 mg/kg) and 6.13±0.47 ml (400mg/kg). Hence, the present study has exerted the potential biological effect of M. tridetata might be useful for the development of alternative medicine for inflammation.

INTRODUCTION: Inflammation and pain are the most common strategies of nonspecific mani-festations of many diseases and it is natural defense mechanism focus on removing the injurious stimuli and initiate the healing process wound. There are many endogenous mediators are responsible for inflammation such as, histamine, serotonin, bradykinin and prostaglandins. These are the most abundant substances/secretions in inflammatory cells and among them prostaglandins are ubiquitous substances that indicate and modulate cell and tissue responses involved in inflammation 6.

The prolonged state of inflammation can cause numerous diseases /disorders such as rheumatoid arthritis (RA), psoriasis, and inflammatory bowel disease 8. The balancing and functioning of the immune system are well maintained through the finely pro-inflammatory & anti-inflammatory process of inflammation. The major mediators/agents of the inflammation are cytokines, eicosanoids, and free radicals are having a direct or indirect effect on the path physiology of inflammatory diseases 9.

Acute inflammation due to with or without clinical background develops into chronic inflammation. In this connection, macrophages & lymphocytes are being activated and release certain inflammatory mediators. Neutrophils are the first blood leukocytes that arrive at the inflammatory site. Tran endothelial migration from the blood to the tissue is a tedious process that requires the involvement of certain chemotactic factors and binding to adhesion molecules at the surface of the endothelium 10. This process involves the transfer of blood neutrophils to the tissues where it is involved in different functions. The blood neutrophils are having a different biological role in the immune system viz; phagocytosis, production of reactive oxygen & nitrogen species that damage DNA & cell membranes & production of chemoattractants such as IL-8, which recruit further competent cells 7. The responses from neutrophils are usually terminated when they undergo apoptosis and are phagocytosed by macrophages. Prostaglandins are chemical substances secreted by inflammatory cells, which in turns increases the production/expression of a key enzyme cycloxygenase, thus inflammation, which spreads to the normal cells, which in turn activates oxidant generating enzymes like NADPH oxidase, xanthine oxidase, myeloperoxidase, etc. The active oxidant also synthesizes superoxide anion and other reactive nitrogen species like nitric oxide through activation of inducible nitric oxide synthase (iNOS) 4.

Free radicals (FR’s) play a major role in process of inflammation. During the process of inflammation, inflammatory cells secrete chemically reactive oxidants, radicals, and electrophilic compounds that bring about the elimination of the infectious agents. Such inflammatory mediators are highly toxic and affect the normal function of the tissue. Many researchers are focusing on inflammation, due to the non-availability of effective, side effect free and safe medication from natural origin. Presently available chemical/synthetic-based commercial drugs may cure the inflammation associated with severe side effects.

Hence, more studies are required for the develop-ment of a novel, natural, side effect alternative medicine to treat inflammation from terrestrial plants. Plants have potent phytochemicals which are having various biological properties are the prime research focus. Presently available many commercial drugs used for inflammation are the products of terrestrial plant origin. Hence, the biomolecules of plant origin should be focused on assessing their biological efficacy as they are having low-cost process and high availability. Merremia tridentata (L.) Hallier belonging to the family Convolvulaceae, grows naturally as a perennial, spreading herb with thick rootstock and is distributed throughout  India on hedges and open wastelands. Traditionally, the plant is used in piles, swellings, rheumatic affections, stiffness of the joints, hemiplegia, urinary infections, and general debility, apart from being a good laxative and astringent 1. The previous studies conducted on M. tridentata have strong wound healing, anti‐inflammatory, and anti‐arthritic activities. M. tridentate is also used as a supplementary feed to the grass Panicum maximum for young West African Dwarf Sheep. The aerial plant parts of the M. tridentata contains a variety of phytochemicals viz; flavonoids, diosmetin, luteolin, and their 7‐O‐β‐D‐glucosides. The acetone extract of M. tridentata root has revealed the presence of high phenolic, which enhances the antioxidant activity 5. Hence, the anti inflammation property of M. tridentata is highly warranted. Thus, the present study focuses on the anti-inflammatory potential of Ethanolic extracts of the Merremia tridentata using the paw edema method induced by histamine and formalin on Wistar albino rats comparable with a standard drug Indomethacin.

Preparation of Ethanolic Leaf Extracts: The fresh plant leaves were washed thrice with running tap water and then with distilled water to remove associated biota and contaminants, followed and air-dried in shade condition. The dried leaf samples were grand using kitchen eclectic blender. The coarsely powdered plant sample was drenched with 100% ethanol and subjected to a cold percolation method. Then the plant extract was concentrated through the air-drying method and stored at 4 °C until its use. The extract was concentrated under vacuum to the solvent-free residues. The percentage yield of extract was 41.64% (w/w).

Experimental Animals: Wistar rats weighing 200-250g were purchased from SreeVenkateshwara Enterprises, Bangalore. The animals were housed in groups of four in standard cages at room temperature (25±3 °C) in 12 h dark/12 h light control, with both food and water and libitum. Twelve hours before the experiments, they were transferred to the laboratory and were maintained only with water ad libitum. Wistar albino rats weighed around 200–250 were used for this study. The work was carried out according to the ethical guidelines of the 466/01a /CPCSEA

Group, I served as negative control and received histamine 50 ug/paw subcutaneously. Group II received indomethacin (10 mg/kg,po), and Group III and IV animals received the extract at the dose of (200 & 400 mg/kg po) respectively. After 30 min, the rats were challenged with subcutaneous injection of histamine 50 µg/paw S.C into the sub plantar region of a right paw. The paw was marked with ink at the level of the lateral malleolus and immersed in mercury up to the mark. The paw volume was measured at 0, 1, 2, 3, 4, and 5 h after histamine injection using Digital Plethysmometer. The difference between initial and subsequent reading gave the actual edema volume.

Group-III: Received extract with a dose of 200mg/kg

Group-IV: Received extract with a dose of 400mg/kg.

Group I received 0.1 ml of a solution of 2.5% formalin/ paw subcutaneously. Group II received Indomethacin (10mg/kg,p.o), and groupIII and IV animals received the extract at the dose of (200 & 400 mg/kg p.o) respectively. After 30 min, the rats were challenged with subcutaneous injection of formalin 50 ug/paw S.C into the sub plantar region of the left paw. The paw was marked with ink at the level of the lateral malleolus and immersed in mercury up to the mark. The paw volume was measured at 0, 1, 2, 3, 4, and 5 h after formalin injection using Digital Plethysmometer. The difference between initial and subsequent reading gave the actual edema volume.

Values are expressed as the mean ± S.D. Statistical significance (p) calculated by one-way ANOVA followed by dunnett’s. ns- Not significant **P< 0.05 calculated by comparing the treated group with the control group. 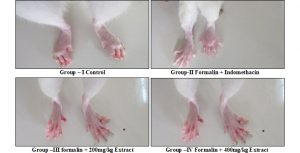 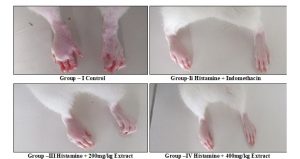 Values are expressed as the mean ± S.D. Statistical significance (p) calculated by one-way ANOVA followed by dunnett’s. ns- not significant **P< 0.05 calculated by comparing the treated group with the control group.

DISCUSSION: Medicinal plants of terrestrial background are considered to have potent active substances than the substances of any other natural origin; hence its use in many pharmaceutical and medical industries are warranted. Plants are effective supplementary sources of drugs as they have rich dietary resources. They have been utilized for various medications for thousands of years (Samuelson, 2004). The phytochemicals of each plant extracts have a variety of active chemicals with different chemical structures. The history of the medicinal plants is so important which explain the continuity and can be essential to treat many diseases and importance of medicated plants from generation to generation where and how it was discovered and who observed the medicinal importance in a different era as the plants provide biologically active and important molecules that can be used for the treatment of different disease.

The present research focused on the development of new anti-inflammatory compounds from the medicinal plant Merremia tridentata. Different agents induce the experimental modes of inflammation by releasing different types of inflammatory mediators. Each is known to elicit distinct mechanisms of action for producing inflammation by increased vascular permeability, the infiltration of leukocytes from the blood into the tissue or granuloma formation, and tissue repair. Among the methods used for screening of anti-inflammatory drugs, one of the most commonly employed techniques based upon the ability of such agents to inhibit hind paw edema of the rat after the injection of a phlogistic agent. Many phlogistic agents (irritants) have been used, such as brewer’s yeast, formaldehyde, dextran, egg albumin, kaolin, Aerosil®, sulfated polysaccharides like carrageenan or naphthoylheparamine. The Herbals extracts were found to reduce the inflammation in the formalin-induced paw edema models. The control group (Group-I) showed a paw volume of 7.91±0.22 ml, and the Group-II showed 5.6±0.27 ml. Lower doses (Group-III) and higher doses (Group-IV) of plant extracts showed 6.1±0.29 ml and 5.49±0.18 ml. The high doses of plant extract showed a significant reduction in paw volume than the standard drug at 6 h. Similarly, on histamine-induced paw edema. The control group (Group-I) showed a paw volume of 7.9±0.29 ml, and the Group-II (Indomethacin) showed 6.02±0.53 ml. Lower doses (200mg/kg) and higher doses (400mg/kg) of plant extracts showed 6.30±0.60 ml and 6.13±0.47 ml. Thus, the plant extracts showed a higher reduction in paw volume of the histamine-induced rats than the standard drugs. From the above analysis, it is confirmed that the Merremia tridentata plant extracts showed paw volume reduction similar to the drug. Thus, the Merremia tridentata plant extracts with active phytochemical compounds could be used as an anti-inflammatory agent.

CONCLUSION: It may be concluded that the results of the present study support the traditional use of Merremia tridentata plant in inflammation and painful conditions, which confirm the presence of active chemical compounds related to these activities. The plant extract showed significant anti-inflammatory extract when compared with the standard drug (Indomethacin). Thus, the Merremia tridentata can be utilized for the treatment of various inflammation-associated diseases and can be used as an alternative against commercial drugs.