ABSTRACT: Worldwide antimicrobial resistance is a serious problem and differs from region to region. This study has designed the determination of the incidence and sensitivity pattern of Escherichia coli (E. coli) and discusses the general issues related to antimicrobial resistance. Prospective study was carried out between JAN to April 2020. Samples of urine, blood, pus and miscellaneous (fluids, swabs and sputum) were collected from indoor patients. The present antimicrobial susceptibility of E. coli, the study was performed in the Department of Microbiology Narayana Super-specialty Gurugram, Total of 315 samples were tested out, 97 samples showed growth on culture and out of 97 samples, 40 E. coli have isolated and tested antibiotics sensitivity, it has been demonstrated that different samples showing a significant amount of antimicrobials Sensitivity and resistance to different antibiotics (Table 2). Antimicrobials, namely Meropenem have shown sensitivity (65%), imipenem (60%), Colistin (70%). Thus, there is a need for the implementation of strong antimicrobial stewardship program and stop misuse of antibiotics with an instant effect. Our region's present study helped us see the actuality of the antibiotic sensitivity pattern of bacteria, which is not good. To reduce antibiotic resistance, immediate steps must be taken as new antibiotic development is very quick. Otherwise, it will result in moving us to a pre-antibiotic era which would be a great step back for the human community.

INTRODUCTION: Escherichia coli is a gram-negative anaerobic, facultative, rod-shaped coli form bacterium of the genus Escherichia that is mostly found in the lower intestine of endotherm. Generally, E. coli are harmless, but few serotype ETEC and EPEC etc. causes serious food poisoning of its own hosts. In current year drug resistance to human pathogenic bacteria is commonly reported throughout world.

Gram-negative microorganisms are resistant to a couple of capsules, and more and more are resistant to the most reachable antibiotics. These microorganisms have built-in Competencies to locate new approaches to be resistant and ignore alongside genetic substances that permit different microorganisms to grow to be drug resistant. Gram-negative infections encompass these prompted by using Klebsiella pneumonia (K. pneumoniae), Pseudomonas aeruginosa (P. aeruginosa). Escherichia coli (E. coli) and Acinetobacter are as nicely as many different, less frequent bacteria. Pseudomonas aeruginosa is the most difficult microorganism to deal with resistance to a range of antibiotics. Escherichia coli (E. coli), the universal facultative Gram-negative bacillus in the human fecal flora, usually inhabit the colon as an innocuous commensal. Theoretically, the antimicrobial that treats E. coli is cotrimoxazole, fluoroquinolones, piperacillin, 0.33 technology cephalosporins, carbapenems and aminoglycosides. Surveillance statistics exhibit that resistance in E. coli is persistently absolute best for antimicrobial dealers that have been in use for the longest time in human and veterinary medicine. Enterobacter cloacae have been pronounced as necessary opportunistic and multi-resistant bacterial pathogens for people for the duration of the closing three many years in health facility wards.

Cloacae and E. hormaechei are most often remoted from human medical specimens. E. cloacae complicated are no longer understood yet; this should be due to the shortage and the dispersion of records available. Its ability to structure biofilms and secrete a variety of cytotoxins (enterotoxins, hemolysins, pore-forming toxins) is vital for its pathogenicity 11. Serratiamarcescens, a gram-negative bacillus categorized as a member of the Enterobacteriaceae, has been recognized as a reason of hospital-acquired contamination for the ultimate too many years. S. marcescens used to be viewed in the beginning to be an innocuous, non-pathogenic saprophytic water organism and was once often used as an organic marker due to the fact its, without problems, known as pink colonies.

The colonies are 1 to 2mm, non-hemolytic, mcoid, easy and spherical on sheep's blood agar after 24 hours of incubation at 37ºC 15 MRSA is a precise pressure of the S. aureus is resistant to methicillin and all β-lactams. Later use of Oxacillin as a choice to methicillin in susceptibility assessments resulted in the time period ‘Oxacillin-resistant S. aureus’ (ORSA), which is resistant to severe antibiotics. Before the improvement of antibiotics, invasive infections prompted with the aid of Staphylococcus aureus have frequently been deadly 18. Candida species are the essential purpose of superficial to systemic fungal contamination in people and the important supply of contamination in fitness care facilities 20. Albicans is the fundamental pathogenic agent of systemic infections; however, for the duration of the current years, the charge of non-albicans Candida species has accelerated in many reports 21.  Enterococcus faecalis and Enterococcus faecium Enterococci reason large infections, together with intraabdominal sepsis, urinary tract infections, bacteremias and endocarditis. It has been described considerably with the aid of Hauser already in 1885 and is regarded to purpose a large spectrum of human diseases, in particular in the hospitalized patient. It bills for about 3% of nosocomial infections in the United States and ranks 1/3 as the reason of trouble-free cystitis, pyelonephritis, and prostatitis. 27.

Sample Collection: This study was conducted at the Department of Microbiology in tertiary care hospital. From Jan-2020 to April 2020, different types of clinical specimens, Such as blood, urine, pus, swab, etc., were received from the inpatient. Antimicrobial susceptibility pattern Escherichia coli (E. coli), from Jan-2020 to June 2020, was analyzed and reported.

Identification of Bacteria: The bacteria were cultured on MacConkey’s agar, Nutrient agar, blood agar and other selective media, followed by the recognition of the isolates based on their cultural characteristics, gram staining, motility, and reactions in standard biochemical tests. 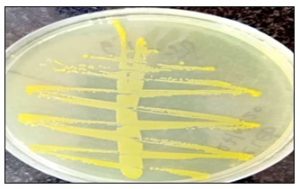 Antimicrobial agents: By the Kirby-Bauer disk diffusion technique on Muller Hinton Agar by Filter Paper disks impregnated with antibiotics (Span diagnostics Limited, Surat, India) susceptibility. A pre-diffusion time of 30 min was allowed at room temperature, and the plates were incubated at 37°C for 24 h. The diameter of the zone of inhibition was measured and compared to that of standard strain, and the results were interpreted as sensitive or resistant, based on Clinical Laboratory Standard Institute 2014 guidelines. The percentage antimicrobial susceptibility of the isolated microorganism against different antimicrobials tested was calculated and interpreted as sensitive and resistant

RESULTS AND DISCUSSION: During this study total sample collected was 315; a total 97 organisms were isolated from 315. Out of all samples, the highest percentage was shown in urine (41.23%) followed by 21% in blood. Out of 97 positive samples of E. coli, 70 samples (72.16%) were isolated in women. In the present study, colistin shows the highest sensitivity 70%, meropenem has shown the 65%. The antimicrobial agents are losing their growth on culture, and out of 97 samples, 40 E. coli, were isolated and tested for antibiotics sensitivity; it has been demonstrated that different samples show a significant amount of antimicrobials Sensitivity and resistance to different antibiotics Table 2. Antimicrobials, namely Meropenem have shown sensitivity (65%), imipenem (60 %), Colistin (70%). 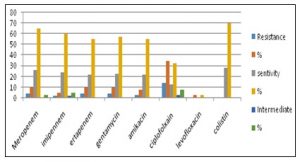 CONCLUSION: In this study, the clinical isolation of E. coli indicates resistance to commonly used antibiotics and towards newer antibiotics. Because of the spread of resistant organisms and indiscriminate use of antibiotics, lack of awareness, patient noncompliance, and unhygienic conditions antimicrobial agents are losing their efficacy.

It is the need of time that antibiotic policies should be formulated to resist and overcome this emerging problem and to, implement a robust antimicrobial stewardship program, and stop the misuse of antibiotics with an instant effect. Our region's present study helped us see the actuality of the antibiotic sensitivity pattern of bacteria, which is not good. For reduction of the problem of antibiotic resistance, immediate steps must be taken as new antibiotic development is very quick. Otherwise, it will move us to the pre-antibiotic era, which would be a great step back for the human community.

Author’s Contribution Statement: Mr. Vipin Kumar, Dr. Malvika, and Dr. Sachin Gupta studied the literature review and gathered the data about this work. Dr. Vipin Kumar Sharma, Dr. Swadesh, Dr. Kapil, and Dr. Ashwani & Rohan Kaushik analyzed these data and necessary inputs were given towards designing the manuscript. All Authors discussed the methodology and result and contributed to the final manuscript.

ACKNOWLEDGEMENT: We are thankful to Dr. Malvika Srivastava (Consultant) Microbiology for the encouragement and guidance in completing this study. Also, we are grateful to the entire staff of the Microbiology department for their cooperation during the study.

CONFLICT OF INTEREST: The Authors confirm no conflict of interest.