INTRODUCTION: Considerable efforts are being made to identify naturally occurring anticancer agents who would prevent, slow and reverse cancer induction and its subsequent development 1. Plants contain abundant quantities of these compounds, and several plant-derived compounds are currently employed successfully in treating cancer. A major group of these compounds is the powerful antioxidants. And the rest include reactive groups that confer the protective properties.

Anticancer agents from plants currently in clinical use can be categorized into four main classes, namely Vinca alkaloids, epipodophyllotoxins, taxanes and camptothecin 2. The plant Solanum jasminoides Paxt (Family: Solanaceae) is a native of South America, introduced and found in the roadsides and waste places in the tempest regions of the Nilgiris, Tamil Nadu, India, at 1500-2500 m altitude regions. The leaves and fruits contain glycoalkaloids 3. The present study was undertaken to investigate the anticancer potential of successive extracts and the isolated fractions of the plant.

Plant Material: The whole plant was collected from in and around the Nilgiris forests, Tamilnadu, India. In June 2004, and authenticated by the Survey of Medicinal Plants and Collection Unit, Govt. of India, Ootacamund, India. A voucher specimen (TIFAC 03) has been deposited for future reference at the college herbarium.

Chemicals: 3-(4,5 Dimethyl thiazole-2-yl)-5-diphenyl tetrazolium bromide (MTT), and sulphorhodamine B (SRB) were obtained from Sigma–Aldrich Co., St. Louis, USA. 5-Fluorouracil (purity≥99%) was obtained from Ranbaxy Ltd., Gurgaon, India. All other chemicals used in the study were of analytical grade and purchased from E-Merck, Ltd., Mumbai, India.

The experiments were conducted with prior approval of the Institutional Animal Ethics Committee (approval no. JSSCP/IAEC/Ph.D/PH. Chemistry/01/2005–2006).

Extraction Procedure and Phytochemical Analysis: The whole plant was chopped to small pieces and dried in the shade. The dried sample (100 g) was extracted successively with 600 mL each of petroleum ether (60–80 ºC), methanol and water in a Soxhlet extractor for 18–20 h. The successive petroleum ether, methanol, and water extracts will henceforth be called SJP, SJM, SJW, respectively. All the extracts were subjected to qualitative phytochemical analysis using standard tests 4.

Isolation of Total Alkaloids from SJM: The Solanaceae family is known to possess glycoalkaloids 3. The total alkaloidal fraction was, therefore, isolated from SJM. The SJM was treated with hydrochloric acid (3%, HCl) and kept overnight. It was then filtered through a Whatman filter paper, and the next day the residue was washed several times with 3% HCl (100 ml). The filtrate was extracted with chloroform (300 ml, 4 times), and the chloroform extracts were combined and dried (non alkaloid fraction). The acid layer was treated with ammonium hydroxide solution (50%) to make it alkaline (>pH 10). The precipitated alkaloids were further extracted in chloroform (250 ml each, 5 times). The chloroform extracts were combined, filtered, and concentrated to dryness under reduced pressure and controlled temperature (40–50 ºC). A pale yellow powder (0.5312 g, 0.53 %) was obtained (alkaloid fraction). Henceforth, the total alkaloidal and non-alkaloidal fraction of SJM will be called as SJM-A and SJM-NA, respectively.

The cells were dissociated with TPVG solution (0.2% trypsin, 0.02% EDTA, 0.05% glucose in PBS). The stock cultures were grown in 25 cm2 tissue culture flasks and all the experiments were carried out in 96 well microtitre plates. DLA and EAC cells were procured from Amla Cancer Research center, Thrissur, Kerala, India. The cells were maintained in-vivo in Swiss albino mice by intraperitoneal transplantation. EAC cells aspirated from the peritoneal cavity of mice were washed with saline and given intraperitoneally to develop an ascitic tumor.

Preparation of Suspension and Solutions: For in-vitro studies each extract (10mg) was separately dissolved in 1 mL of dimethyl sulphoxide (DMSO), and the volume was made up to 10 mL with maintenance medium to obtain a stock solution of 1 mg/mL concentration and sterilized by filtration. Further dilutions were made from the stock and used for short and long term cytotoxicity studies.

For in-vivo studies SJP, SJM, SJW, SJM-A, SJM-NA, and standard 5-FU were suspended in sodium carboxymethyl-cellulose (CMC, 0.3%) and administered orally to the animals with the help of an intragastric catheter.

Cytotoxicity Studies: The cytotoxicity assay was carried out using 0.1 mL of cell suspension, containing 10,000 cells seeded in each well of a 96 well microtitre plate (Tarson India Pvt., Ltd., Kolkata). Fresh medium containing different concentrations of the test sample was added after 24 h of seeding. Control cells were incubated without the test sample. The microtitre plate was incubated at 37 ºC in a humidified incubator with 5% CO2 for a period of 72 h. Sixteen wells were used for each concentration of the test sample. The CTC50 was determined by the standard MTT 5 and SRB assays 6.

Short Term Cytotoxicity Studies: The short term toxicity studies were carried out against DLA and EAC cells using standard procedures 7. The long term toxicity study was carried out by the method of Freshney 8. A series of cultures were prepared in 25 cm2 tissue culture flasks, three for each concentration and three control of seeding 2 × 105 cells in 4 mL of growth medium and incubating at 37 ºC for 48 h. Long term survival studies against normal (Vero) and cancer (HEp-2) cell cultures were carried out, and the regeneration capacity of the cells was estimated by standard clonogenic assay. Three nontoxic concentrations of each extract were tested for their reduction in regenerative capacity, in comparison with untreated cell control. Among all the tested samples, SJM-A showed well in-vitro cytotoxicity against all cancer cells in-vitro. SJM-A was, therefore, selected to study it's in-vivo anticancer activity in different tumor models.

Effect of SJM-A on Mice Bearing DLA Cells Swiss Albino mice were divided into five groups with six animals in each group. All the animals were injected with DLA cells (1 × 106) intraperitoneally except the normal group. This was taken as day zero. Group, I served as normal control and group II as tumor control. These two groups received sodium CMC suspension (0.3%) administered orally. Group III served as a positive control and was treated with standard 5-Fluorouracil (5-FU) at 20 mg/kg per oral route. Group IV and V were treated with SJM-A at a dose of 25 and 100 mg/kg per oral route, respectively. All these treatments were given 24 h after the DLA cells were inoculated, once daily for 10 days. The clinical signs, mortality, and body weight changes were recorded throughout the study period.

Effect of SJM-A on Mice Bearing EAC Cells: Swiss Albino mice were divided into five groups, with six animals in each group. All the animals were injected with EAC cells (2 × 106) intraperitoneally except the normal group. Group, I served as normal control and group II as tumor control. These two groups received sodium CMC suspension (0.3%), orally. Group III served as a positive control and was treated with standard, 5-Fluorouracil (5-FU) at 20 mg/kg p.o. Group IV and V were treated with SJM-A at a dose of 25 and 100 mg/kg p.o., respectively. All these treatments were given 24 h after the tumor inoculation, once daily for 10 days. The clinical signs, mortality, and body weight changes were recorded throughout the study period.

The effects of SJM-A on the average life span of DLA bearing mice are shown in Fig. 1. 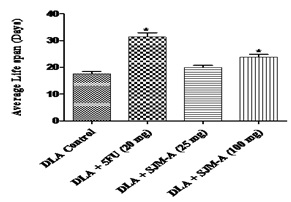 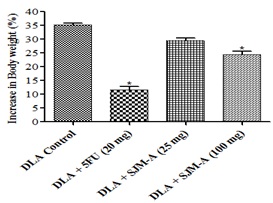 The data reveal that treatment with SJM-A has a significant reduction in the percentage increase in body weight (p˂0.001) when compared to DLA control. The standard 5-FU, however, is more potent in inhibiting the increase in body weight of tumor-bearing mice. The data reveal that the treatment with SJM-A at 100 mg/kg significantly (p≤0.01) increases the average life span (ALS) of EAC bearing mice when compared to EAC tumor control group. This is comparable to standard 5-FU at 20 mg/kg. SJM-A at 25 mg/kg also shows a moderate increase (p≤0.01 to p≤0.05) in ALS, namely, 20.55 ± 1.75.

The effect of SJM-A on the average life span (ALS) of EAC tumor-bearing mice is shown in Fig. 3. 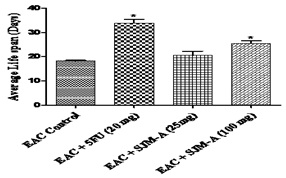 The effect of SJM-A on the percentage increase in body weight of EAC tumor-bearing mice is given in Fig. 4. 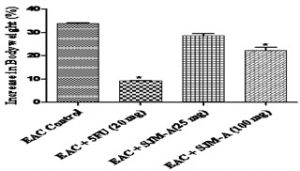 DISCUSSION: Alkaloids represent a very extensive group of secondary metabolites, with diverse structures, distributed in nature with important biological activities. The cyclic compound containing nitrogen in a negative oxidation state is distributed to a limited extent in living organisms 9. However, strong physiological effects of some alkaloids present opportunities for utilizing them in human medicine. Although a number of the polyhydroxylated alkaloids have been reported to show anticancer activity, recent research has concentrated on developing alkaloids as drug candidates for the management of human malignancies. There is considerable evidence that alkaloids enhance the natural antitumor defenses of the body 10, 11. Merschjohann has analyzed the cytotoxic potential of 34 alkaloids of various structural types against T. brucei and T. congolense 12. Many alkaloids, of which more than 21,000 structures have been found in plants, show a high degree of toxicity towards animals. Though many alkaloids are neurotoxins that interfere with neuroreceptors, ion channels or other parts of the neuronal signal chain, a substantial number of alkaloids are cytotoxic.

Cytotoxicity is the result of the molecular interactions of an alkaloid with one or several important targets present in a cell. The main targets include DNA, RNA, and the associated enzymes and related processes (i.e., replication, repair, transcription, DNA polymerase, RNA polymerase, reverse transcriptase, repair enzymes, topoisomerase, telomerase), protein biosynthesis, protein conformation, biomembrane integrity, and membrane proteins 13, 14, 15, 16, 9. Cytotoxicity is one of the chemotherapeutic targets of antitumor activity 17. Most of the clinically used antitumor agents possess significant cytotoxic activity in cell culture systems 18. Although the mechanism of tumor-inhibiting the activity of alkaloids is not clear, they are reported to decrease the high glycolytic activity of Ehrlich’s ascites cells by inhibition of (Na-K)- ATPase in the plasma membrane 19. This might be responsible for the inhibition of tumor growth.

The plants of the Solanaceae family are known to possess glycoalkaloids. The alkaloidal fraction of the methanolic extract of the plant, Solanum jasminoides (SJM-A) was, therefore, tested for its anticancer activity. The reliable criteria for judging the value of the anticancer potential of a sample is the prolongation of the life span of animals. In the present study, treatment with of the alkaloidal fraction SJM-A increases the life span of animals significantly with significant prevention of body weight changes when compared to tumor-bearing mice indicating its potent anticancer property.

Ascitic tumor implantation is known to induce per se local inflammatory reactions with an increase in vascular permeability, resulting in an intense edema formation, cellular migration, and a progressive ascetic fluid formation 20. The ascitic fluid is essential for tumor growth since it constitutes the direct nutritional source for tumor cells 21. The prevention of the body weight changes in the treated animals may be due to the reduction in ascitic fluid volume, which in turn may have restricted the tumor progression.

ACKNOWLEDGEMENT: The authors thank the Department of Science and Technology, Government of India for financial support.

COMPETING INTEREST: The authors declare that they have no competing interest.