The present investigation was undertaken to study the antimicrobial and antioxidant activity in algae (Chlamydomonas reinhardtii CC 124).  The extractions of metabolites were done by two methods (glass bead and steel ball) using methanol: chloroform: water (5:2:2) as solvents.  The presences of metabolites were identified by thin layer chromatography and structural analysis was done by Gas Chromatography and Mass Spectrometry. Antimicrobial activities of the extracts were assessed against bacterial and fungal strains (Bacillus subtilis, Pseudomonas aeruginosa, Klebsiella pneumoniae, Candida albicans, Aspergillus niger, Aspergillus flavus) by disc diffusion method and compared with standard antibiotics.  The results, of both extracts showed more potent antimicrobial activity in (B. subtilis,P. aeruginosa, K. pneumoniae) bacterial species and (C. albicans) fungal strain. The antioxidant activity was tested by DPPH (2, 2-Diphenyl-1-picrylhydrasyl) free radical method and determination of H2O2 radical scavenging activities were also performed. The presence of antioxidants was compared with commercial antioxidants, such as BHT (Butylated Hydroxy Toluene), BHA (Butylated Hydroxyl Anisole).The phenolic content was compared with gallic acid. From the present study, it can be concluded that the two different extracts of the algae has the antimicrobial and antioxidant activity.

INTRODUCTION: Chlamydomonas is a genus of green alga, belonging to unicellular flagellates and has been used as a model organism in molecular biology, especially studies of flagellar motility, chloroplast dynamics, biogenesis, and genetics. Chlamydomonas species are known to produce high levels of galactose containing polysaccharides that can be hydrolyzed to produce monosaccharides 1.

The production of extracellular antibiotic metabolites by marine algae has been well studied in recent years 2-3. Various strains of cyanobacteria are known to produce intracellular and extracellular metabolites with wide biological activities such as antialgal, antibacterial, antifungal and antiviral activity 4. Both cell extracts and extracts of the growth media of various unicellular algae (e.g. Chlorella vulgaris, Chlamydomonas pyrenoidosa) has proved to have antibacterial activity in vitro against both Gram-positive and Gram-negative bacteria 5. It has also been reported that a wide range of antifungal activities were obtained from extracts of green algae, Diatoms and Dinoflagellates 6. Brown-algal polyphenols and phlorotannins worked as antioxidants, antibacterial and anti-algal compounds 7. Antioxidant compounds play an important role against various diseases (e.g., chronic inflammation, atherosclerosis, cancer and cardiovascular disorders) and ageing processes, which explains their considerable commercial potential in medicine, food production and the cosmetic industry 8.

In the earlier publication interest in employing antioxidants from natural sources was considerably enhanced by consumer preference for natural products and concern about potential toxic effects of synthetic antioxidants. The potential of metabolite extracts of   C. reinhardtii CC 124 for practical applications has not been previously studied in detail, thus this study provides important information concerning the antimicrobials and antioxidants present in C. reinhardtii CC 124.

Algal material: Chlamydomonas reinhardtii strains CC-124 were acquired from Centre for Plant Molecular Biology (CPMB), Tamilnadu Agriculture University (TNAU), and Coimbatore and maintained in Tris-acetate-phosphate (TAP) medium at 25°C under constant illumination with cool white fluorescent light and kept in an Erlenmeyer flask for 125 rpm for two weeks. The cultures (5 × 105 cells/ml) were inoculated in fresh medium (TAP) and maintained for 48 hours. After the incubation period the cells were centrifuged. The harvested cells were washed twice with sterile 20 mM Tris (pH 7.0), supplied with 300 mM CaCl2, 400 mM MgCl2, and 7 mM KCl, and resuspended at a starting density of 2.5×106 cells/ml in 20 ml of Tris-buffered media under standard growth conditions for 24 hours 9.

Extraction of metabolites using Glass bead and Steel ball: 1ml of the cell suspension was mixed with 1ml of 70% ice cold methanol. The mixture was centrifuged for 10 minutes at 14,000 rpm at 4°C.The supernatant was discarded and the pellet was removed carefully and stored. The pellet was mixed with 0.5ml of solvent mixture in the ratio of 5:2:2 (methanol: chloroform: water) in ice cold condition 10. According to Oliver Fiehn et al., (2006) the sample was extracted with slight modifications. 100µl of the extract was mixed with single glass beads (3mm) and steel ball (5mm) and crushed thoroughly. The extracts were collected and centrifuged at 14,000 rpm for 2 minutes. The supernatant was collected and mixed with the solvent mixture and centrifuged at 14,000 rpm for 2 minutes. The upper phases of the two samples were lyophilized and stored in -80°C 11.

GC-MS analysis: The algal samples (glass bead and steel ball method) were analyzed by GC-MS [SHIMADZU instrument, model: GC-MS QP2010]. The GC silica column dimension was 30m × 0.25mm × 0.25µm DB-5ms. The conditions for GC were an injector temperature of 200˚C, column temperature of 80˚C and programmed to rise up to 300˚C at the rate of

10˚C/min and stand for 10 minutes. The ion source temperature was 200˚C and the interface temperature was 240˚C. Helium gas was engaged as a carrier at the rate of 1ml/minThe spectra were obtained in EI mode with 70eV ionization energy. The compounds were identified by comparing with the standards or the mass spectra were matched with the inbuilt library (NIST/Wiley).

Antimicrobial Assay: Antibacterial and antifungal activities of algae were tested by well diffusion method. The antimicrobial activity of microalgae was compared with antibiotics like (Amikacin, Amoxicillin, Streptomycin, and Erythromycin).  Six microbial strains were used in this study namely Bacillus subtilis, Pseudomonas aeruginosa, Klebsiella pneumoniae, Candida albicans, Aspergillus niger and Aspergillus flavus. The extracts (glass bead and steel ball method) were dissolved in 2% DMSO (Dimethyl sulfoxide) (200mg/ml) and subjected to agar plates in various concentrations (20µl, 40µl, 60µl and 80µl). The inoculated plates were incubated for 24 hours at 37 °C and zone of inhibition was measured 13-14.

DPPH (2, 2-Diphenyl 1-2 picrylhydrasyl) Assay: DPPH (2, 2-diphenyl-1-picrylhydrasyl) radical scavenging activity were determined for the extracts (glass bead and steel ball method). 1ml of methanolic solution of DPPH radicals (3 × 10-4mol/l) were added to 2.5 ml of sample and measured immediately (without incubation) after 20 minutes of incubation period. The absorbance recorded spectrophotometrically at 517 nm. A decrease by 50% of the initial DPPH concentration was defined as the IC50 (Inhibition Concentration). The IC50 value (µg/ml) was determined for all the extracts. BHT was used as the reference compound (IC50 = 0.021 µg/ml) 15-16.  The capacity of the scavenging free radicals were calculated as follows

As = sample absorbance of the algal extract in the DPPH solution,

Ab = blank absorbance of the sample extract without DPPH solution

Ac = absorbance of the control solution containing only DPPH (1 ml of DPPH radical of 3 × 10-4mol/L concentration + 2.5 ml of methanol).

Total Phenolic Content: The total phenolic content in the C. reinhardtii extracts were determined spectrophotometrically according to the Folin-Ciocalteu 18, method using gallic acid as a standard (the concentration range: 0.025 to 0.5 µg/ml). 200μl of the sample was mixed with 9 ml of distilled water, and 1 ml of Folin-Ciocalteu reagent and 10 ml of 7% sodium carbonate was added. After 90 minutes of incubation, the absorbance was determined at 765 nm. The total phenolic content was expressed as GAE (Gallic Acid Equivalent) in milligram per gram extract 19. The standard absorbance at 765 nm = 0.431 Cgallic acid (µg/ml) – 9.33 × 10-3, R2 = 0.9992.

Detection of metabolite compounds by Thin Layer Chromatography: The metabolites present in the two extracts were identified by thin layer chromatography. The results showed the presence of more compounds in steel ball method extraction than the glass bead extract. Similar work was done in TLC and the presence of compounds in C. reinhardtii CC 124 were reported as Gal-acyl2 Gro, acyl2 Gro-Me3Hse, PtdGro, PtdEtn, SQui-acyl2 Gro, Gal -acyl 2 Gro, Ptdlns 20 .

Analysis of C. reinhardtii CC 124 metabolites by using GC-MS analysis: The composition of the volatile compounds of the C. reinhardtii glass bead and steel ball extract was determined by GC/MS.  Different groups of compounds identified such as hydrocarbons, phenols, alcohols and esters are shown in Table 1 and 2. The glass bead extract has 10 compounds and the steel ball extract has 11 compounds fig. 1 and 2.The compounds which were identified through mass spectrometry were found to exhibit the biological and pharmacological activity. In recent years, many studies on volatile compounds from C. reinhardtii CC 124 have been published 10-11.

Previous publications reported that the compounds such as 1-Nonadecene, 1-Octadecene, 1-Tetradecene, Diisooctyl phthalate, and 1-Heptacosanol were found in both algae and plants shows anticancer, antioxidant and antimicrobial activity 21-22. 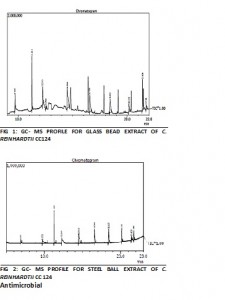 Antioxidant Activity of crude extract DPPH (2, 2-Diphenyl 1-2 picrylhydrasyl) Assay: Chemicals which are able to change the color of DPPH free radical from purple to yellow can be considered as antioxidants and therefore, a radical scavenger 15. The C. reinhardtii CC 124 extract were tested for antioxidant activity using various concentrations of the glass bead and steel ball extracts ranging from 10-50µg/ml and compared with the standard BHT. The 50 µg/ml concentration showed the IC50 value of 66.13% for glass bead and 71.13% for steel ball. The result shows the presence of strong antioxidant in steel ball extract than the glass bead extract, which is equal to the Standard BHT. The absorbance of algal extracts and standard BHT, percentage inhibition was calculated and were tabulated in Table 5.

Determination of H2O2 radical scavenging activity for antioxidant assay: The scavenging activities were determined for glass bead and steel ball extract range from 10-50µg/ml and compound with BHA standard.The concentration of 50µg/ml showed higher scavenging activity in glass bead sample 90.69% and steel ball has 97.34%. The activity was found to be approximately linear with R2 (Correlation coefficient) value for glass and steel ball respectively 0.978 and 0.995. The absorbance of algal extracts and standard BHA at 230nm were recorded, percentage inhibition were calculated and tabulated in Table 6. In earlier studies the algal extract of brown algae species showed good antioxidant activity. Among the previous results, Hexane extracts of D. dichotoma var. implexa were found to have good antioxidant activity 19-18.

CONCLUSION: Marine organisms have several active chemicals such as antioxidant and antimicrobial compounds. The present study proves that the steel ball extracts of C. reinhardtii CC 124 showed profound antimicrobial, antioxidant effect and have potential uses in medicine. Metabolites identified during this study represent different structural classes of natural products. This indicates that the marine derived algae have a wide range of biosynthetic capabilities for the production of novel drugs. These compounds might have still undiscovered biological activities.

The work can be further modified by complete purification of the metabolites and can be used in pharmacological studies for the potential discovery of new natural bioactive compounds. Much work remains to explore the metabolic characteristics of C. reinhardtii CC 124 in relation to defense as well as symbiosis between marine algae and their associated organisms. Finally, to our knowledge, this is the first time that antimicrobial, and antioxidant property, have been described for C. reinhardtii CC 124.