ABSTRACT:  Carbonic anhydrases (CAs, EC 4.2.1.1), are a superfamily of metalloenzymes in higher vertebrates, including humans. Sixteen distinct isoenzymes of CA are known to exist in mammals and most of these isoenzymes have been extensively investigated in terms of their biochemical properties, tissue distribution, and genetic control. There are cytosolic isozymes (CA I, CA II, CA III, CA VII and CA XIII), membrane bound examples (CA IV, CA IX, CA XII and CA XIV), and mitochondrial (CA VA and CA VB) and secreted (CA VI) isoforms. It was proposed that hCA IX is a multidomain protein consisting of an N-terminal proteoglycan like (PG) domain, a CA catalytic domain, a transmembrane segment (TM), and an intracytoplasmic (IC) portion. Carbonic anhydrase IX and XII inhibitors can prove to be effective in treatment of hypoxic tumours. Moreover the side effects with these drugs will be less than those caused by other anticancer drugs as these enzymes are present constitutively in only a few tissues.

INTRODUCTION: Carbonic anhydrases (CAs, EC 4.2.1.1), are a superfamily of metalloenzymes in higher vertebrates, including humans.1, 2 Most CAs are involved in only one physiological reaction and they act as efficient catalysts for the reversible hydration of carbon dioxide to bicarbonate and protons (CO2 + H2O ↔ HCO3- + H+).1 Sixteen distinct isoenzymes of CA are known to exist in mammals and most of these isoenzymes have been extensively investigated in terms of their biochemical properties, tissue distribution, and genetic control. 3, 4

The enzyme is found in many tissues such as the gastrointestinal tract (GI), the reproductive tract, the nervous system, kidneys, lungs, skin and eyes, wherein it plays key roles in a number of physiological and pathological processes, such as pH regulation, ions and gas exchanges, calcification, photosynthesis, tonic modulation of brain excitability through modulation of amino acid receptors, and biosynthetic reactions (such as gluconeogenesis, lipogenesis, and ureagenesis) 1, 2, 5-10

There are cytosolic isozymes (CA I, CA II, CA III, CA VII and CA XIII), membrane bound examples (CA IV, CA IX, CA XII and CA XIV), and mitochondrial (CA VA and CA VB) and secreted (CA VI) isoforms.11–17 Three acatalytic forms, called CA-related proteins (CARPs) (CARP VIII, CARP X and CARP XI) are also known.1The expression of CA I and CA II has been most frequently investigated in a variety of tumor cells, cell lines and some carcinoma patients 9, 18-20, but it has been difficult to find a clear-cut relationship between the expression  of such CA isozymes in normal and malignant cells. However, no evidence of a direct relationship between malignant transformation and CA expression has been presented for CA isoforms I - VII. It appears that only the expression of the above-mentioned isoforms CA IX and CA XII is strongly associated with tumorigenesis 21.

In 1994, carbonic anhydrase isozyme was discovered to be present in many types of tumors, later it was denominated as CA IX. 17 Over expression of two CA isozymes (CA IX and CA XII) are predominantly associated with many tumors and it is being postulated that they are involved in critical processes connected with cancer progression.1, 22, 23 The presence of CA IX in various tumor types has been found to correlate with poor prognosis.24 CA IX is confined to few normal tissues (stomach and body cavity lining), but it is ectopically induced and highly overexpressed in many solid tumor types, through the strong transcriptional activation by hypoxia, accomplished via the hypoxia inducible factor-1 (HIF-1) transcription factor 1, 12, 23 which accumulates in tissue under the hypoxic condition that is often present in growing tumors.

That, in turn, is an outcome of poorly organized and insufficient vasculature in uncontrollably growing malignant tissue.24 CA IX has effects on cell adhesion, too, and it has been suggested to play a role in tumor invasion through weakening of cell-cell adhesion as E-cadherin is competing for β-catenin 25. However, the effect of CA IX on tumor cell invasion is still under debate as some recent results have suggested that there is no evidence of such a correlation.26 In some cancer cells, the VHL (von Hippel-Lindau) gene is mutated leading to the strong upregulation of CA IX (up to 150-fold) as a consequence of constitutive HIF activation. 27-29 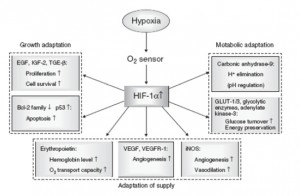 FIG. 1: SCHEMATIC REPRESENTATION OF THE ROLE OF HYPOXIA INDUCED ACCUMULATION OF HIF-1 IN HUMAN CANCERS ADAPTED FROM VAUPEL ET AL.30

As CA IX is confined to few normal tissues such as the gastric mucosa (where it seems to be in a catalytically inactive state), CA IX inhibitors may

show less side effects compared to other anticancer drugs which interact with their target both in the normal and cancerous tissues and hence cause an array of side effects.31

Structural studies on isozymes I, II, III, IV, V, XII, XIII, and XIV have revealed that all these isoforms present a considerable degree of three-dimensional similarity and a typical fold characterized by a central antiparallel β-sheet surrounding a Zn2+critical for catalysis. The active site is located in a large, cone-shaped cavity that reaches the center of the protein molecule. The zinc ion is close to the bottom of the cavity and is coordinated by three conserved His residues in a tetrahedral geometry with H2O or OH- as the fourth ligand.32-40

A cDNA coding for the human Carbonic anhydrase (hCA) IX protein was first cloned and investigated by Pastorek et al.17, and the CA IX gene was further characterized by the same group. 41 On the basis of the sequence similarity, It was proposed that hCA IX is a multidomain protein consisting of an N-terminal proteoglycan like (PG) domain, a CA catalytic domain, a transmembrane segment (TM), and an intracytoplasmic (IC) portion.17

In vitro methods to study the activity of carbonic anhydrase modulators:

The cell cultures can be grown in 75-cm2 flasks in a 37°C incubator with humidified 5% CO2/95% air. When the cultured cells reach 80-90% of confluence, they should be trypsinized and plated in 6-well plates (except for the HUVEC cells which should be plated in 59-cm2 dishes) at appropriate densities to obtain a sufficient quantity of cells for RNA extraction. After 24 h, the cells should be added to fresh serum-free medium with the drugs or growth factors being tested.

Only serum-free medium must be added to two control wells/dishes. The cells must be incubated for 24 h in the presence of the drugs or growth factors (modulators). Total RNA from cultured cells must be extracted using RNA isolation kit. Residual DNA can be removed from samples using RNase-free DNase. The RNA concentration and purity can be determined by measurement of the optical density at 260 and 280 nm. Different quantities of RNA (U373, 410 ng; HeLa, 600 ng; A- 498, 850 ng; HepG2, 1000 ng; HUVEC and MCF-7, 1100 ng; Caki-1, 1400 ng) should then be converted into first-strand cDNA using the First Strand cDNA synthesis kit using random hexamer primers.

The levels of human CA IX and CA XII transcripts in the different cell lines can be assessed by quantitative real-time PCR using the Lightcycler detection system. Real-time PCR primers can be designed based on the complete cDNA sequences deposited in GenBank (accession numbers: NM_001216 for CA9, NM_001218 for CA12, and NM_001530 for HIF-1α). The house-keeping genes ubiquitin C (UBC) and β -2-microglobulin (B2M) can be used as internal controls to normalize the cDNA samples for possible differences in quality and quantity. The UBC primers can be obtained from RT primer DB database (under the identification number 8), and the B2M primers can be designed on the basis of the complete B2M cDNA sequences (accession number: NM_004048). In order to avoid amplification of genomic DNA, the primers from each primer pair must be located in different exons. Each PCR reaction must be performed in a total volume of 20μl containing 1.0μl of first-strand cDNA, 1× QuantiTect SYBR Green PCR Master Mix and 0.5 μM of each primer.

The amplification and detection can be carried out as follows: after an initial 15 min activation step at 95°C, amplification should be performed in a three-step cycling procedure for 45 cycles: denaturation at 95°C for 15 sec, annealing at a temperature determined according to the Tm for each primer pair for 20 sec, and elongation at 72°C for 15 sec (the ramp rate must be 20°C per sec for all the steps), and a final cooling step.

Melting curve analysis should always be performed after the amplification to check the specificity of the PCR reaction. To quantify the levels of transcripts in the cell lines, a standard curve must be plotted for each gene using five-fold serial dilutions of known concentrations of purified PCR products generated with the same primer pairs. Every cDNA must be tested in triplicate, and the obtained crossing point (Cp) value permitted the levels of the starting mRNA must be determined using a specific standard curve. The geometric mean of the two internal control genes must be used as an accurate normalization factor for gene expression levels. The final relative mRNA expression will indicate the copy number of the target gene divided by the corresponding normalization factor and multiplied by 103.43

ACKNOWLEDGEMENTS: Authors would like to thank Dr Vilasrao Kadam, Principal, Bharati Vidyapeeth’s College of Pharmacy, for providing the required facilities.