ABSTRACT: The aim of this study is to investigate the cytotoxic effect of various extracts from Phyllanthus emblica L. According to Ayurveda this plant has potent anticancer activity and hence, this study is targeted at screening potential cytotoxic extracts using a yeast system. Yeast has been used as a model organism for many preclinical drug screens. In this study phytochemical extraction has been done by three methods (sonication, low and elevated temperature systems) using six different solvent systems (aqueous, methanol, ethyl acetate, petroleum ether, chloroform: methanol and water: methanol).  The viability studies have been done using Methyl Thiazole Tetrazolium (MTT) assay. Aqueous extract at elevated temperature and water: methanol extract showed viability less than vinblastine. Further phytochemical analysis was done to identify major group of compounds present in each extract. It was concluded that flavonoids are present in extracts by doing TLC. HPTLC using standards was carried out and showed that at least two chemotherapeutic agents kaempferol and rutin were present. The data further indicates that kaempferol is major constituent in the extracts

INTRODUCTION: Medicinal Plants have been known to mankind since ages, India itself has a number of indigenous systems of medicine based on plants and plant products. The usage of plants as traditional health remedies is the most popular among 80% of the world’s population in Asia, Latin America and Africa and is reported to have minimal side effects.1 However; modern science requires that we move from empirical uses of plants in medicine to scientifically substantiated applications.

Further, one can assume that several different active principles (or their precursors) are present in extracts, since the history of their medicinal use demonstrates that the same plant has been used for several different medical conditions.  Hence it makes good sense to separate and identify active components. This will enable us to isolate important plant compounds for specific applications in medicine.

Phyllanthus emblica L. belongs to the family Phyllanthaceae and preliminary research has demonstrated its in vitro antiviral and antimicrobial properties.2 While there is evidence that its extracts induce apoptosis, 3 it has also been suggested that it may prove to have potential activity against some cancers.4, 5, 6 Experimental evidence showing that its bark leaves and fruits have shown potential efficacy against cancer besides diabetes, and inflammation too exists.7

According to World Health Organization statistics, breast cancer is the most prevalent form of cancer disease in women. Our review of the literature indicated several plants that have been used for breast cancer cures 8, but not all of them have resulted in purifying a single active principle or a mixture of known active principles. Hence, identifying the active principle involved in the plant based therapies for breast cancer from some of the other plants will enable us to ensure a wider range of medications that could be used to specify one that can help a given patient for chemotherapy, since it is known that a given chemotherapy for a specific cancer does not have identical effects on every patient. The aim of this study is to substantiate the medicinal effect of selected plants with respect to breast cancer by the use of cell culture technology.

As an experimental organism, yeast is a model of simplicity. Its 90-minute population doubling time allows for relatively short experiments allowing for examining exposure to drugs over many population doublings within minimal experimental time spans. In addition, yeast requires very simple and inexpensive media, can grow either in liquid culture or on solid media, and can be readily manipulated to express foreign genes.

Yeast was the first eukaryotic organism to have its genome fully sequenced and an extensive annotation of most yeast genes has been compiled. In addition, a vast array of tools allows the efficient and accurate manipulation of yeast genes. Genome-wide functional analyses, including the analysis of transcriptional responses to a range of stimuli and comprehensive maps of protein–protein interactions, further increase the ease of studying of yeast cell and systems biology.

Finally, the high degree of conservation with mammalian cells in terms of gene sequence and protein and pathway function makes yeast very relevant for anticancer drug discovery. 9 Therefore this study involves use of genetically modified yeast having its cell cycle altered used as prescreen for the extracts.10

Plant materials were collected from the plant repositories and botanical gardens at St. Xavier’s College campus. The sample used by us was originally bought from government nursery, Gandhinagar and planted at green house of Xavier Research Foundation. The leaves were air dried under shade and crushed finely. This powder was then used for all extraction purposes.

The extraction was carried out for three different experimental conditions: i) lower temperatures (25oC) ii) elevated temperature (example- 60oC for methanol, near its boiling point) iii) sonication. The solvents selected were i) water ii) methanol iii) ethyl acetate iv) chloroform:methanol: (1:1) v) water:methanol (1:1). The entire range of solvents was used for each of the experimental conditions. The selection of solvents was based on azeotropic range from polar to non-polar. For each of the conditions 1gram of powder was weighed and suspended in 20ml of selected solvent. The cold extraction procedure involved continuous shaking and changing of solvent every 24 hours until it was rendered colourless. However for the elevated temperature and sonication based methods solvent was changed every one hour until solvents were rendered colourless. These were pooled and the solvent was allowed to evaporate. The residue was resuspended in Dimethyl Sulfoxide (DMSO) to make a stock of 10mg/ml and stored at 40C.

The cytotoxicity of extracts in yeast cells was determined using the Methyl thiazol tetrazolium (MTT) assay.11 Yeast cells at an OD660 of 0.820 (approx 1.3x107cells) were transferred to 96-well microplate. Extracts at concentration of 50 µg, 100µg, 150 and 200µg/100μl were constituted form the stored stocks mentioned above using growth medium and then added to the wells. It may be noted that no precipitates were seen and it was verified. The final concentration of DMSO was below 1%. The incubation with extracts was done for 16 hours and 24 hours. Vinblastine was used as positive control at same concentration as the extracts and cells without any drug as negative control. Cells were also incubated with DMSO as vehicle control. After exposure of 24 and 16 hours, 20 µl of MTT dye (2.5mg/ml) was added to each well. The plate was then incubated in dark for four hours. In order to dissolve the formazan crystals 100 µl of DMSO was added after four hours and the plate agitated for five minutes. The absorbance was read at 570nm using a Thermofischer Multiskan GO microplate reader. Based on the absorbance cell viability was calculated and the ones showing cytoxoicity more than the positive control were considered to be effective.

In order to identify phytochemicals in extracts preparative thin layer chromatography (TLC) was done.12 All the extracts were subjected to TLC in two solvent systems i) ethyl acetate:methanol:water (100:13.5:10) and ii) toluene:ethyl acetate (93:7). Solvent system i) seperates polar compounds and ii) seperates non-polar compounds. Each TLC plate was then treated with various spraying reagents for detection of phytochemicals.12 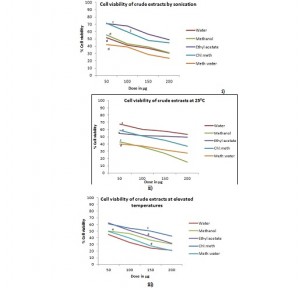 Further, the cells were exposed for different time durations to the extracts. It was observed that with increased exposure time the cytotoxic effect increases. (Fig. 2) This was uniform for all extracts as there was a considerable decrease in cell viability from 16 hours exposure to 24 hours exposure. 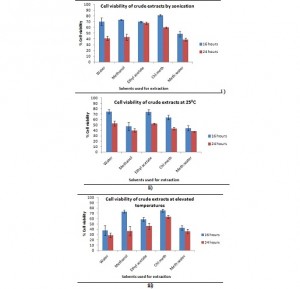 The preliminary analysis using TLC indicated the presence of flavonoids in all extracts. The water extract at elevated temperature showed separation of more than one compounds. Further HPTLC was performed using flavonoid standards. The Rf values indicated that all extracts had either rutin or kaempferol present. The water:methanol extract showed only one Rf indicating presence of kaempferol whereas the ethyl acetate extract showed presence of rutin only. The water, methanol and chloroform:methanol extracts had rutin and kaempferol both present. (Fig.3) 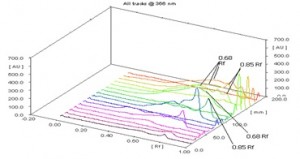 FIG.3: ABSORBANCE PEAKS OF VARIOUS STANDARDS AND EXTRACTS AT 366 nm

Plants have been utilized as medicines for thousands of years. 13 Isolation and characterization of pharmacologically active compounds from medicinal plants continue today. More recently, drug discovery techniques have been applied to the standardization of herbal medicines. Phyllanthus emblica L. is a promising anticancer herb form which effective compounds need to be identified.  Drug discovery from medicinal plants has played an important role in the treatment of cancer and, indeed, most new clinical applications of plant secondary metabolites and their derivatives over the last half century have been applied towards combating cancer 14, 15. Hence we have tried to identify active compounds form plants by using yeast as a model system. In this study we demonstrated that flavonoids from the plant are probably responsible for the cytotoxic activity. Phyllanthus emblica L. is known to have flavonoids present and cytotoxic effect has been demonstrated.16

CONCLUSION: The results indicate that water, methanol and water:methanol extract have cytotoxic effect on yeast cells. Moreover the use of different methods of extraction yields similar compounds whereas different solvents are able to extract various compounds. The study concludes that Phyllanthus emblica L. has various flavonoids present and possibly responsible for cytotoxic effect.

ACKNOWLEDGMENT: This study was funded under the FAP- 2012 scheme of Gujarat State Biotechnology Mission.