ABSTRACT: The purpose of this work is to evaluate the possibility of enzyme therapy through microencapsulation of serratiopeptidase (SP) in biodegradable nanoparticles of chitosan (CS). This drug has short biological half-life and thus frequent administration makes it a suitable candidate for controlled release. In this study, serratiopeptidase loaded chitosan nanoparticles were prepared by ionotropic gelation of CS with tripolyphosphate (TPP) anions. Reversible physical cross-linking by electrostatic interaction, instead of chemical cross-linking, has been applied to avoid the possible toxicity of reagents and other undesirable effects. The enzyme loaded particles optimized formulation was coated with sodium alginate solution to protect its release in stomach. The enzyme loaded nanoparticle formulations were characterized for by morphology, particle size, encapsulation efficiency and in-vitro drug release. The preliminary studies show that TPP and CS were compatible with SP. The ratio of CS to TPP has an influence on the mean particle size and when CS: TPP is 4:1 nanoparticles with smallest diameter are formed. Entrapment efficiency depends on the degree of deacetylation of chitosan. The formulation F-3.3 showed 75.22 % In-vitro drug release at 24 hours in PBS at pH7.4 and only 16.03% at 2 hr in SGF at pH 1.2. It is inferred that dissociation of the associated macromolecule from chitosan predominantly governs the release process. This dissociation is in turn, affected by the intensity of the interactions and the ionic strength of the release medium.

INTRODUCTION:Proteins and peptides have long been considered as therapeutic modalities to combat human diseases ever since the commercial introduction of insulin, thyroid hormones, and coagulation Factor VIII in the early and mid-1900s.

With advances in recombinant DNA technology and solid-phase synthesis, public interest in protein and peptide therapeutics has greatly increased over the years. Thus far, more than 200 proteins and peptides have received US Food and Drug Administration (FDA) approval for treating a variety of human diseases. While modern genomic and proteomic technology enables rapid screening of novel proteins and peptides as potential drug candidates, design of delivery systems for these biologics remains challenging especially to achieve site-specific pharmacological actions 1.

1)      Through the elimination of inflammatory mediators,

2)      Through the acceleration of liquefaction of pus and sputum, and

3)      Through the enhancement of the action of antibiotics 3.

Clinical studies show that serrapeptase induces fibrinolytic, anti-inflammatory and anti-edemic (prevents swelling and fluid retention) activity in a number of tissues, and that its anti-inflammatory effects are superior to other proteolytic enzymes 4. Serratiopeptidase consumed in unprotected tablets or capsules, the enzyme is destroyed by acid in the stomach.

Many attempts have addressed these problems by chemical modifications or by coadministration of adjuvants to eliminate undesirable properties of peptide and protein drugs such as chemical and enzymatic instability, poor absorption through biological membranes, rapid plasma clearance and immunogenicity 5.

Particulate systems like nanoparticles have been used as a physical approach to alter and improve the pharmacokinetic and pharmacodynamic properties of various types of drug molecules. They have been used in vivo to protect the drug entity in the systemic circulation, restrict access of the drug to the chosen sites and to deliver the drug at a controlled and sustained rate to the site of action. Various polymers have been used in the formulation of nanoparticles for drug delivery research to increase therapeutic benefit, while minimizing side effects 7, 8.

The concept of incorporating a drug into a polymeric or macromolecular particulate carrier was introduced by the pharmaceutical scientist as a means to modify the physicochemical and biological properties of entrapped drug.

Carriers are basically, composed of polymeric particles in the nanometer size range, the surface of which is covered by a layer of poly (alkane oxide) can bypass the normal physiological defense processes occurring after IV injections of particulates. The choice of carrier depends on several factors, including the nature of the protein to be delivered, the device for delivery, the site of action the disease state, and the nature and safety of the carrier 9.

Chitosan is able to open epithelial tight junctions to allow for an increase in paracellular transport of macromolecular drugs. Chitosan, however, suffers from low solubility at a physiological pH of 7.4, limiting its use as absorption enhancer in, for example, nasal or peroral delivery systems. To overcome this problem, a number of cationic or anionic chitosan derivatives have been synthesized and tested by covalent attachment of enzyme inhibitors to the chitosan backbone, enzyme degradation of the drug to be delivered might be prevented 10.

Chitosan and chitosan derivatives easily form micro- and nanoparticles, which are being investigated as delivery systems for vaccines in mucosal immunization studies, and plasmid DNA in non-viral gene therapy including radiopharmaceuticals. Trimetylchitosan chloride, at different degrees of quaternization, increases the permeation and or/absorption of neutral and cationic peptide analogs across intestinal epithelia 11. Chitosan when protonated (pH<6.5), is able to increase the paracellular permeability of peptide drugs across mucosal epithelia.

Glacial acetic acid, Tripolyphosphate (TPP), Sodium alginate and all other chemicals used were of analytical grade.

Preformulation Studies: The following preformulation studies were carried out to determine the inherent stability of the molecule (drug substance) and to identify the key problems that are likely to be encountered in a development of a stable formulation.

The purple color of BCA-Cu+1 complex is read at 562nm. This method was used in the determination of protein content in various formulations. The interference of the additives in the estimation of the drug was determined.

Solubility Profile: Serratiopeptidase was tested for its solubility in various common solvents as stated in table. A definite quantity (10mg) of the drug was taken in 10.0ml of each solvent at room temperature in a tightly closed test tube and test tube were clamped in wrist action shaker for 24hrs.The tubes were observed visually for the presence of insoluble particles of the drug.

Drug Partitioned Studies: The partition of serratiopeptidase was determined in n-Octanol: PBS (pH 7.4). Accurately weighed drug (20mg) was transferred into a glass stoppered test tubes containing 10ml of n-Octanol and 10ml of PBS (pH7.4).The mixture was shaken on a wrist action shaker for 4 hrs. Both the phases were separated using separating funnel and drug concentration in both phases was determined at 562 nm by using UV-Visible spectrophotometer against respective blank.

Preparation of Nanoparticulate Chitosan-Tpp Complexes: Nanoparticulte chitosan-TPP complexes were prepared by Ionic gelation technique. The acidic phase of pH 4-6 containing 0.25% w/v chitosan in 1% aqueous acetic acid and alkaline phase pH 7-9 containing 0.1% TPP was prepared in Millipore. Nanoparticles are formed immediately upon drop-wise addition of alkaline phase in to acidic phase at room temperature under continous agitation at 1000 rpm for 1 hour.

Thus, obtaining inter and intramolecular linkages created between TPP phosphates and chitosan amino groups 12. The 1:1 ratio of drug and polymer was used. Nanoparticles with varying characteristic can be obtained with different concentrations of chitosan and TPP, as well as by changing the relative volumes of the acidic and alkaline solutions. In order to produce maximum drug entrapment, high yield of stable and solid nanometric structures, the Chitosan: TPP weight ratio should normally be within the range of 3:1, 6:113.

Sodium alginate coating: Alginate coated nanoparticles were obtained by mixing of equal volumes of nanoparticles suspension and a buffer phosphate solution of sodium alginate (1% w/v) under magnetic stirring. The suspension was then centrifuged for 10 minutes at 1600 rpm and the supernatant was discarded. The particles were resuspended in 0.524mM CaCl2 in 50mM HEPES buffer solution and kept under agitation for another 10 minutes14.

200mg of KBr and 100mg of sample were mixed well in ceramic mortar. The powder was pressed in KBr hydraulic press to obtain the pellet. The peaks were assigned for characteristic groups.

Preformulation Studies: The absorption maximum (λmax) of serratiopeptidase was found to be 562 nm. Bicinchoninic acid (BCA) assay obeys Beer,s law in the concentration range 2-20µg/ml, with a correlation coefficient near to unity. The standard curve of serratiopeptidase was prepared in PBS (pH7.4). None of the additives was found to possess same λmax as that of drug and hence no interference of the additives in absorbance was found at 562nm.

Solubility of the drug was determined in various solvents at room temperature. It was observed that the drug was soluble in methanol and ethanol (semi polar solvents), freely soluble in aqueous solvents (distilled water, PBS pH7.4). The drug was insoluble in the organic solvents. The partition of serratiopeptidase in n-Octanol: PBS (pH 7.4) was found as 0.596.

Preparation & Characterization of Nanoparticles: The association of oligonucleotides was found to be more efficient when the nanoparticles were formed by ionic gelation with CS and TPP.

The formation of chitosan nanoparticles is governed not only by electrostatic interactions between the oligonucleotides and chitosan, but also between TPP and chitosan, because of this controlled gelation process, the resulting nanoparticles are more spherical and compact than those obtained by simple complexation or aggregation. Upon mixing of positively charged CS and negatively charged TPP solutions resulted in formation of ionic linkages. These linkages could make the macromolecular chains of CS rolling up, which was responsible for the formation of the gelation of the CS solution. 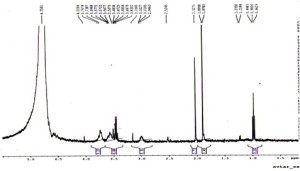 Particle size and Zeta potential: From the results of particle size and zeta potential listed in table 1 & 2 the nanoparticles thus obtained were in the size range of 200-800nm. The diameter distribution of the nanoparticles is smallest when CS: TPP= 4:1. This result suggested that the ratio of CS to TPP have an influence on the mean particle size. The surfaces of CS-TPP nanoparticles have positive charges of about +48.6 to +18.1mV, because of the cationic characteristic of CS (prior to alginate coating). However, it is interesting to find that as the ratio of CS-TPP increases, the zeta potential also increases.

These results indicate that the surface structure and the surface charge of these nanoparticles can be adjusted by different preparation processes.

In vitro drug release: The initial release of drug within 2 hours from the formulations F3.3, F3.4, and F3.5 at pH1.2 were 16.03, 13.8 and 48.8% respectively. In case of release from the surface, adsorbed drug instantaneously dissolves when it comes in contact with the release medium. This type of drug release is mainly because of burst effect. Increasing the cross-linking density can prevent the burst release. However, at a pH 7.4, the nanoparticles are swollen to a great extent, resulting in a fairly fast release of serratiopeptidase compared with the release at pH 1.2. These results suggest the possibility to adjust the drug release of CS-TPP nanoparticles by changing the pH values. 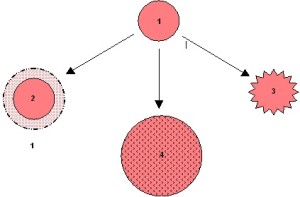 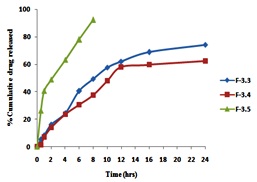 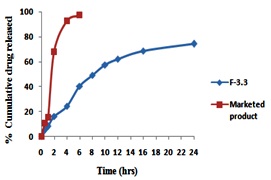 On comparison of the release profile of the pure drug and formulation in different pH conditions, it was found that the release from F3.3 was found to be slow and constant whereas the release from free drug solution was within a very short period of 20 minutes. This was because of the cross linking agent, polymer in which drug is entrapped and physicochemical properties.

The dissociation of the associated macromolecule from chitosan predominantly governs the release process. This dissociation is in turn, affected by the intensity of the interactions and the ionic strength of the release medium.

However, an increase of the peak intensity at 1651 and 1561cm-1 can be understood as the presence of SP. Characteristic band of chitosan at 1595 cm-1 corresponding to the NH2 scissoring vibration of primary amino group, was not present. This event was probably due to the formation in acidic medium of chitosan ionized form and to the ionic interaction of the ammonia groups of chitosan with the phosphate groups of TPP. 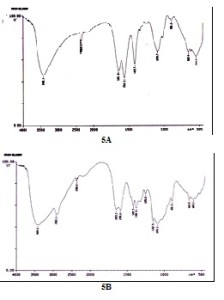 FIGURE 5(A) & (B): FTIR SPECTRA OF PURE CHITOSAN AND DRUG LOADED CS NANOPARTICLES 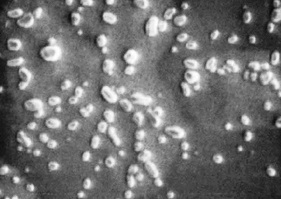 After sodium alginate coating, investigations from FTIR, and Zeta potential (reversal of charge) revealed that a membrane of sodium alginate was formed on the surfaces of the CS-TPP core through a combination of ionic, hydrophobic interactions and hydrogen bonding.

CONCLUSION: The serratiopeptidase peptidase formulation developed in this study showed some potential for controlled delivery of serratio-peptidase and hence, improved patient compliance. However, it would be necessary to undertake further studies, including bio availability and in animal models with a view to determine the potential of serratiopeptidase in vitro and in vivo correlations.