A new, simple and rapid reversed-phase high-performance liquid chromatography (HPLC) method was developed and validated for the determination of some azoles drug (Ketoconazole, Isoconazole and Miconazole) in pharmaceutical dosage forms in Jordan market. The HPLC separation was achieved on a C18 BDS column (100 mm × 4.6 mm) using a mobile phase of acetonitrile and 0.05 M Ammonium Acetate buffer (70:30, v/v) that adjusted to pH 6 using phosphoric acid at a flow rate of 1 mL min−1 and using UV absorbance detection at 254 nm. The method was validated for specificity, linearity, precision, accuracy, robustness. The separation was completed within 11.77 minutes and the assay was linear over the concentration range of 50% to 150% (r2 = 0.9999), the percent recovery for test and reference formulation was (98.14%-101.12%).

INTRODUCTION: Azoles are synthetic compounds of which imidazoles and triazoles are two clinically useful families employed in the treatment of systemic fungal infections 1, 2, 3, 4, 5, the basic structural unit of all of the antifungal azoles is a five-membered azoles ring which is attached by a carbon nitrogen bond to other aromatic rings, imidazole drugs contain two nitrogen atoms in the azoles ring. In contrast, the triazole class of agents contains a third nitrogen atom in the azoles ring 6, 7.

Azoles antifungal agents inhibit the cytochrome P450 sterol 14-demethylase (CYP51) by a mechanism in which the heterocyclic nitrogen atom (N-3 of imidazole and N-4 of triazole) binds to the hemi iron atom in the binding site of the enzyme.

Ketoconazole (fig. 1 (a)) used as broad spectrum antifungal agent that is administered topically or orally. It is an imidazole derivative 8, 9. Isoconazole (fig. 1 (c)) has been developed and marketed primarily as a once-a-day, topical anti-Candida agent for the treatment of vaginal candidiasis 10.  Studies evaluating isoconazole have demonstrated that 80 to 90% of patients with vaginal candidiasis who were treated once a day with the drug remained clinically and mycologically cured 11, application of the free base of isoconazole in combination with ethanol/propylene glycol, volatile/nonvolatile vehicle can increase drug bioavailability in the skin 12.Miconazole (fig. 1 (b)) another imidazole derivative, is applied widely as the nitrate salt (MIC), to treat fungal infections 8, 13, 14, with  wide activity spectrum, it is endowed with a powerful activity against dermatophytes and Candida albicans, as well as against

several Gram-positive germens 15, the generally accepted mode of action of azole antifungals is the inhibition of 14-alpha-lanosterol demethylase, a key enzyme in ergosterol biosynthesis, resulting in depletion of ergosterol and accumulation of toxic 14-alpha-methylated sterols in the membrane of susceptible yeast species 16.

Very few methods for development and analysis of azoles individually are reported in literature. Most methods include high performance liquid chromatography assay. Pascucci et al 17, A.Nguyen Minh Nguyet et al 18 and Y. Vander Heyden et al 19 have used ketoconazole with formaldehyde, the  other method was optimization and validation with UV-detector  for determination of ketoconazole in plasma and pharmaceutical preparations such as tablets, creams and shampoos 20-22.

Literature survey reveals some methods for the determination of Miconazole in pharmaceutical preparations or in biological fluids including HPLC, (Tyler T.) did an experiment to analyze Miconazole, the sample is dissolved in ethanol, diluted in acetonitrile-water (1:1), and injected onto a C18 column.  The mobile phase used consists of acetonitrile, a triethylammonium phosphate buffer; the active ingredient is determined using UV detection at 214 nm 23-27, a reversed-phase high performance liquid chromatography (RP-HPLC) method with UV detection is described for the simultaneous determination of miconazole in pharmaceutical dosage forms. Chromatography was carried out on a C18 reversed-phase column, using a mixture of methanol-water (40:60, v/v) as a mobile phase, at a flow rate of 1.0 ml min-1 28.

Gas chromatography 31, also spectrophotometric method is based on high-performance liquid chromatography on a reversed-phase column using a mobile phase of methanol-water-phosphoric acid (30:70:0.20 v/v) (pH 2.8) with UV detection at 220.0 nm, as mentioned by Erk N 24, 30, 31, 32.

Many methods have been described in the literature for the determination of azoles were time consuming and expensive, as they require large amounts of reagents. However, the literature revealed that no method is reported for the simultaneous estimation of azoles combination products 33-38.

In this present paper we have developed and validated single HPLC method for determination combination of Ketoconazole (Keto), Isoconazole (Iso) and Miconazole (Mico) as active ingredients in some commercial products in Jordan market and in their raw materials. The developed method was accurate, robust and inexpensive. 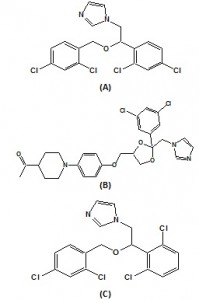 A placebo solution was prepared by dissolving 1.00 g of a placebo mixture of excepients in 20.0 ml mobile phase.

RESULTS AND DISCUSSION: Optimization of chromatographic conditions: are included parameters such as: composition of mobile phase, pH, and retention time and in additionally it provides information about robust method in variation of some parameters like pH and temperature. With the optimized chromatographic conditions, a steady baseline was recorded.

The retention time was found to be 6.48, 10.54 and 11.77 min for KETO, ISO and MICO respectively. A typical chromatogram of sample solution is given in figures 2, 3 and 4. Detection was done at 254 nm and separation was performed using BDS C18 column with 3μm particle size (10cm x4.6mm). The assay procedure was repeated for ten times and mean peak was calculated. All results are compared with validation of analytical procedure and methodology, according to ICH guidelines 39.

Precision: The purpose of system precision is to find the degree of agreement between individual test results when the procedure is applied repeatedly to multiple injections (10 injections) of the same homogenous sample (Table 1). All RSD values were below 2% which indicates good system suitability.

TABLE 1: RSD VALUES FOR 10 SAMPLES FOR EACH KETO, ISO AND MICO

Dilution for Accuracy and Recovery Studies: Recovery studies were carried out by addition of standard drug solution to sample at 3 different levels In order to estimate the accuracy, three samples at three different concentrations levels 50,100 and 150% were analyzed.  Analytical concentration at level 100% is analyzed in triplicate preparation at each level against standard as shown in Table 2.

TABLE 2: RESULTS OF ACCURACY FOR MICO

Figures 2, 3 and 4 show a correlation relationship in which an increase in concentration leads to increase in the area of the peaks. 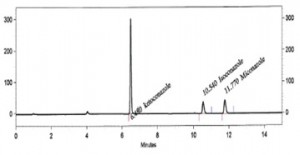 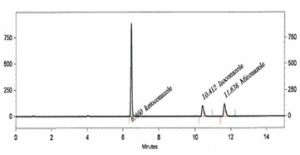 Stability of Analytical Solution: Analytical concentration at level 100% is analyzed by preparations at each level (duplicate readings) against a standard solution.  Concentration for each are about 0.125 g/L for KETO, 1 g/L for ISO and 1g/L for MICO.

The stability results of sample and standard solutions under fridge and room temperature are shown in Tables 3.

It is important to know at which level the analyte solution are stable.  This could be evaluated by determining the concentrations of the analytical solutions (standard and sample) which were stored for 24 Hours under fridge and at room temperature compared to freshly prepare standard solutions. The accepted limits of stability were within 98.0% -102.0%.

TABLE 4: ROBUSTNESS TEST RESULTS REGARDING TO CHANGE IN TEMPERATURE BY +5 CELSIUS (30OC).

Electivity: It is important to study the selectivity of the method to determine the capability of the analytical procedure to measure accurately and specifically in the presence of the active ingredients, placebo and another ingredient.

A standard, sample, solvent and a placebo solution were injected into the column according to the parameters stated under the developed method. It was found that there is no interference between the analyte and both the solvent or placebo.

The selectivity test also includes the analysis of drugs in the pharmaceutical formulation, comparing the results of analysis between local Jordanian manufactured drugs formulations with some international foreign formulations.

A local finished product such as KenazoleR tablets (Pharma International- Jordan) for Ketoconazole, AzonitR cream (Pharma International- Jordan) for Isoconazole and MycohealR Dar AL Dawa- Jordan, for Miconazole (test formulations).  With the use of NizoralR tablets (Janssen-Cillag) for Ketoconazole, TravogenR cream (Schering) for Isoconazle and DaktarinR cream (Janssen-Cillag) for Miconazole, all as a foreign manufactured drug formulations (Reference formulations).

The results of recovery% are shown in Table 5.

Linearity and Range: A series of standard samples at different concentrations of the target compounds were prepared to evaluate the linearity.  After analyzing each preparation in duplicate, a linear regression analysis was performed on the average peak areas versus the concentration of the levels studied.  Results for KETO, ISO and MICO are shown in Table 6.

The equation of calibration curve is:

The calibration curve of peak area versus concentration% for KETO is shown in figure 6. The results show that an excellent correlation exists between response factor and concentration of drugs within the concentration range indicated above.

FIGURE 6: CALIBRATION CURVE OF PEAK AREA VERSUS CONCENTRATION %FOR KETO.

The value of R²<1 which indicating a good linearity test result.

The concentrations of ISO (50%-150%) are analyzed by using HPLC and give a good RSD% values.

FIGURE 7: CALIBRATION CURVE OF PEAK AREA VERSUS CONCENTRATION % FOR ISO

The figure shows a good linearity for ISO within the stated limit to obtain a linear validation method, R²<1so the curve in figure 5 is linear curve. 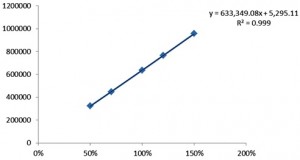 FIGURE 8: CALIBRATION CURVE OF PEAK AREA VERSUS CONCENTRATION % FOR MICO

CONCLUSION: In summary, a simple, rapid, accurate and practical HPLC method is described for determination of some azoles in pharmaceutical preparation. The validation data demonstrate good precision and accuracy, which prove the reliability of proposed method. Hence, this HPLC method could be used routinely for identification and estimation stability of dosage forms. The developed method is suitable for the quality control of the raw materials, formulations and dissolution studies.

ACKNOWLEDGMENT: The authors would like to convey appreciation to Dar Al Dawa pharmaceutical company –Amman –Jordan for technical support.