ABSTRACT: Simple, specific, accurate and cost economic UV spectrophotometric methods were developed and validated for determination of Celiprolol Hydrochloride. Instead of using organic solvents, mixture of dilute hydrochloric acid and water was used during method development and validation. The drug was extracted from tablet formulation with a mixture of water and hydrochloric acid. Stability of drug solution and formulation was established throughout the analysis time. Zero Order Derivative and Area Under Curve methods were developed for estimation of drug and both the methods were validated as per ICH guidelines. The linearity of drug was established by performing calibration curve. The analytical range of drug was established from linearity study. Precision of the method was established with Intraday and interday analysis. Accuracy was established by conducting recovery study. Robustness of both the methods was confirmed by conducting analysis with different analysts

INTRODUCTION: Celiprolol Hydrochloride (CPHL) is a highly cardio-selective β1 adrenergic blocker with partial β2 agonist activity (Vasodilating) 1. CPHL is equal to other β-blockers in controlling blood pressure and heart rate increases during exercises. The drug is comparable or superior to other β-blockers and calcium channel blockers in angina 2. CPHL is primarily indicated in conditions like Angina pectoris, Hypertension3, mild to moderate hypertension, and can also be given in adjunctive therapy as an alternative drug of choice in Arrhythmias and Supraventricular Arrhythmias 3-9.

It is official in Indian & British Pharmacopoeia. Chemically it is 3-[-3Acetyl-4-[(2RS)-3-[(1, 1-dimethylethyl)amino]-2-hydroxypropoxy]phenyl]-1,1-diethyl urea hydrochloride10. It is a white off, very slightly yellow, crystalline powder, freely soluble in water and in methanol, soluble in ethanol (96%) and very slightly soluble in Methylene Chloride. Analytical methods available for CPHL are Potentiometric method 10 HPLC, and Colorimeteric method 11.

Literature survey revealed that no zero order and Area Under Curve UV spectrometric method was reported for estimation of drug. In the present work, the study was conducted using aqueous solvent so that waste disposal was not a problem. The present paper was aimed to provide simple, accurate, cost economic and precise method for estimation of CPHL in tablet formulation.

The solubility of drug was determined in a solvents such as Methanol, Ethanol (IP, BP) as well as in dilute HCl.

Determination of λ max of drug:

Accurately weighed quantity of 10 mg drug was dissolved in 30 ml distilled water & 2 ml conc. HCl and was transferred to 100 ml volumetric flask and volume was made with 0.01 N HCl to prepare 100 µg/ml  and kept for ultrasonication for 5 min. The resulting standard stock solution of bulk drug was further diluted with Dil. HCl to get 15 μg/ml concentrations. The solution was scanned between 200-400 nm range against Dil. HCl as blank. After observing the UV-Spectrum of drug, 232 nm was selected as λ max for further analysis (Fig. 1). 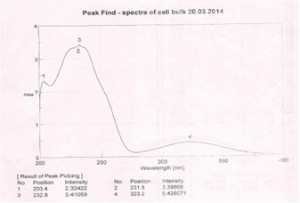 Extraction of CPHL from tablet formulation: 11

Accurately weighed quantity 10mg of drug was transferred to a volumetric flask and dissolved in the mixture of 30 ml water and 2.0 ml of conc. HCl. The sample was centrifuged, filtered and diluted with 0.01 N HCl up to the mark to prepare 100 µg/ml solution. Similarly, tablet powder equivalent to 10 mg of drug was also processed using water and conc. HCl to prepare 100 µg/ml solution. The absorption spectrums of series of dilution of CPHL extracted from tablet were scanned from 200 nm to 400 nm and compared with that of bulk solution (Fig. 2 & 3). 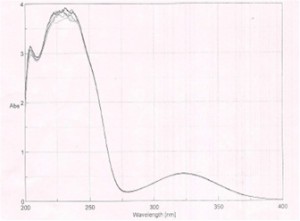 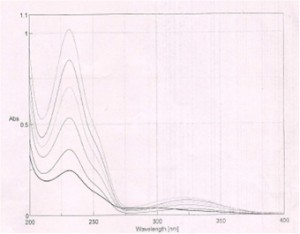 Series of dilutions of tablet stock solutions were prepared separately to get 3-18 µg/ml of working standards. The stability of these solutions was checked by measuring the solutions at 232 nm at two different time intervals, i.e. initially and after 72 hrs. The overlain spectra of tablet solution, obtained at two different times were compared to verify the stability of solution. (Fig.4 and 5). 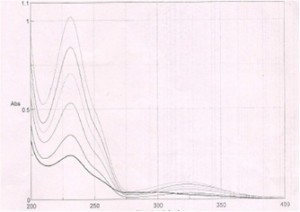 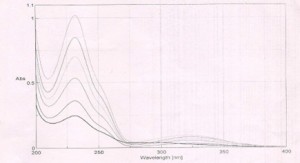 Preparation of standard and test solutions of tablet formulation:

The quantity of tablet powder equivalent to 10 mg drug was dissolved drug tablet powder was dissolved in 30ml distilled water & 2 ml conc. HCl and was transferred to 100 ml volumetric flask and volume was made with 0.01 N HCl and kept for ultrasonication for 5 min. It was filtered and volume was made up to the mark to prepare concentration of 100 µg/ml. From the resulting standard stock solution, series of dilutions were prepared to get 9, 12, and 15 µg/ml of laboratory samples.

In this method, calibration curve was obtained by plotting absorbance of working standards (3-18 µg/ml) against concentrations at 232 nm to get zero order spectra of CPHL(Fig. 6 and Table 1). 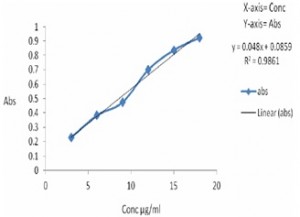 TABLE 2: RESULT FOR LABORATORY ANALYSIS OF TABLET FOR METHOD A & B

For the selections of analytical wavelength, 15 µg/ml solution of drug was prepared and scanned in the spectra measurement mode across 200-400 nm range. From the spectra of drug, area under the curve in the range of 231-241 nm was selected for further analysis (Fig. 1).

The calibration curve was obtained by plotting AUC of working standards in the range of 3-18 µg/ml against concentration (Fig. 7). The laboratory solutions of tablet (9, 12, and 15µg/ml) were measured separately against 0.01 N HCl blank. From the regression equation, the concentration of drug in the laboratory solutions of tablet was estimated (Table 2).

Validation of method A and Method B for bulk and tablet formulation:

The analytical methods were validated as per ICH guidelines 12 for the parameters linearity, range, accuracy, precision, limit of detection, limit of quantitation, and robustness.

Drug solutions of concentration from 3-18 µg/ml were measured at 232 nm for reading absorbance. The calibration curve was prepared. The correlation coefficient and regression equation was obtained. The range was established from linearity study. (Table 3, Fig. 6)

TABLE 3: RESULT FOR VALIDATION PARAMETERS FOR BOTH METHODS

Accuracy of tablet solution was determined by performing recovery studies by spiking pure drug in pre-analyzed sample solution at different level i.e. 80%, 100% and 120%. The resulting solutions were analyzed by proposed methods to estimate the concentrations. The percent recovery, SD and %RSD were calculated to establish the accuracy of the method. (Table 4)

Precision of the method was studied as intra-day and inter-day variations. Intra-day precision was established by analyzing three concentrations (8, 10, and 18 µg/ml) of tablet formulation in triplicate, three times a day by the proposed methods, to estimate the concentration of drug in solutions (Table 5).

Inter-day precision was determined by analyzing three concentrations 8, 10, and 18 µg/ml of tablet formulation, in triplicate and on three consecutive days by the proposed methods to estimate the concentration of drug in solutions. For both inter and intraday precision, SD and % RSD were calculated, to ascertain the precision (Table 5)

For ascertaining robustness three different analysts analyzed the tablet solutions for estimation of drug concentration by proposed methods. Mean, SD, %RSD were calculated and reported to signify the robustness of the method (Table 6).

The present work was aimed to provide simple, accurate, cost economic and precise analytical methods for estimation of CPHL in tablet formulation. Solvent used for analysis of tablet was mixture of hydrochloric acid and water. The analytical wavelength for method A was determined and was observed 232 nm (Fig. 1), and for that of method B was 231-241 nm. The drug was extracted from tablet formulation by using the mixture of water and dilute hydrochloric acid. Scans of working standard of tablet solution was compared with that of bulk solution of drug to verify that drug has properly extracted from tablet formulation (Fig. 2 and 3). The patterns of overlain spectra of tablet solutions obtained at two different time intervals, i.e. initially and after 72 hrs were found identical which confirmed that the analytical solutions were stable throughout of analysis time (Fig. 4 & 5).

CONCLUSION: The  study of validation parameters revealed that both the methods were simple, accurate, precise, robost, and can be applied for routine analysis of tablet fromulation. Study conducted using aqueous solvent which  made anlaytical methods  cost-effective and ecofriendly.

CONFLICT OF INTEREST: No conflict of interest