ABSTRACT: The study is focused on developing a simple, rapid, validated High Performance Liquid Chromatographic (HPLC) method for Glimepiride Tablets from their dosage forms. The detection was carried out at 230 nm using Shimadzu UV - Visible detector HPLC system. The accuracy and precision were determined and validated statistically. The linearity was observed in the range of 15-120 µg/mL with a correlation coefficient of 0.999. The limit of detection and the limit of quantification were found to be 4 ng and 10 ng respectively. A Lichrosorb®(RP-18 column with a mobile phase consisting of acetonitrile – water – glacial acetic acid (550:450:0.6 v/v)) was used. The flow rate was 1 mL/min. The HPLC method is selective, precise and accurate and can be used for routine analysis of preparations in pharmaceutical industry quality control laboratories.

INTRODUCTION: Glimepiride 1-[[4-[2-(3-Ethyl-4-methyl-2-oxo-3-pyrroline-1-carboxamido)ethyl]phenyl]sulphonyl]-3- trans-(4-methylcyclohexyl)urea is a Sulfonyl Urea derivative. It is widely used in type-2 diabetes. It is an oral AntiDiabetic with prolonged effect and it maintains a more physiological regulation of insulin secretion during physicalexercise, which suggeststhat there may be less risk of hypoglycemia1. Glimepiride is one of the third generation sulfonylurea, antidiabetic drug which stimulates insulin release 2. The drug shows low, pH dependent solubility. In acidic and neutral aqueous media, Glimepiride exhibits very poor solubility at 37oC (<0.004 mg/mL).

In media pH>7, solubility of drug is slightly increased to 0.02 mg/mL. This poor solubility may cause poor dissolution and unpredicted bioavailability 2-4. Glimepiride is a white powder and is insoluble in water, soluble in dimethylformamide, and slightly soluble in methylene chloride and methanol 5. The chemical structure of the molecule is presented in Figure 1. Literature survey revealedHPLC methods developed for the estimation of glimepiride in tablets and biological fluids 6-11.

Capillaryelectrophoresis 12, spectrophotometry 13, polarography 14, liquid chromatography-electro-sprayionization tandem mass spectrometry15 methods were also developed for theestimation of glimepiride in biological fluids. The aim of the presentstudy was to develop a simple, economical andaccurate analytical method for the estimation of Glimepiride in pharmaceutical dosageforms.Because analytical methods must be validated before useby the pharmaceutical industry, the proposed HPLC-UVmethod was validated in accordance with the InternationalConference on Harmonization (ICH) guidelines 16, byassessing its selectivity, linearity, accuracy, precision, andlimits of detection and quantitation.

Reagents and Chemicals: All chemicals and reagents used wereHPLC grade. Glimepiride standard was obtained from Sigma Aldrich. Tablet formulation containing 1, 2, 3 and 4 mg Glimepiride was obtained commercially. HPLC grade Acetonitrile was procured from Merck Ltd. All other chemical reagents were of analytical grade.

Instrumentation and Chromatographic Conditions: A Shimadzu HPLC system was utilized, consisting of the following components: quaternary pump LC – 20 AD, vacuum degasser unit DGU – 20 A5 and a UV/VIS variable detector SPD – 20 A. Separation was carried out on a LiChrosorb C 18 column (125 x 4 mm, particle size 5µm) under reversed phase partition chromatographic conditions. The mobile phase consisted of an aqueous solution containing acetonitrile: water: glacial acetic acid in ratio (550:450:0.6). The mobile phase was filtered through 0.45 µm membrane filter and degassed by using sonicator for about 10 min before use. The sample solutions were also filtered using 0.45 µm membrane filters. The mobile phase was delivered isocratically at a flow rate 1 mL/min. The column was maintained at 25ºC temperature. The injection volume was a 20 µL and the total run time was 7 minutes. The detection was carried out at 230 nm.

Preparation of the Standard Solution: About 30 mg of Glimepiride were accurately weighed and transferred into 200 mL volumetric flask and dissolved in mobile phase.

The final drug concentration of 30 μg/mL was obtained by dissolving the appropriate amount from this standard stock solution in the above said mixture. Calibration standards of Glimepiride were prepared by making serial dilutions of the stock solution at concentrations of 15.0, 30.0, 60.0, 90.0, 120.0 μg/mL.

Sample Preparation: Twenty tablets were accurately weighed (to obtain the average mass of one tablet) then finely powdered. Weight equivalent to 3 mg of Glimepiride (one tablet) was weighed, transferred into a 100 mL volumetric flask and dissolved with about 50 mL mobile phase. The contents were sonicated for 10 minutes. The mixture was made up to 100 mL with the same.

The solution was filtered through a membrane syringe filter (pore size 0.45 µm). The sample solution was injected and the peak area was measured for determination of Glimepiride in a tablet formulation.

RESULTS AND DISCUSSION: After equilibration of column with the mobile phase indicated by a stable baseline, aliquots of sample (20 µL) were injected. The typical chromatogram is shown in Figure 2. The amount of Glimepiride present in the tablets was calculated using single point analysis method and results are shown in Table 1. 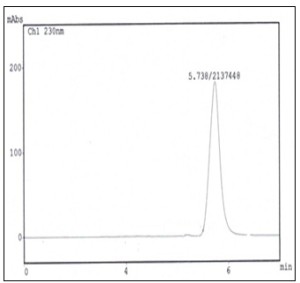 The method was developed and validated by using the ICH guideline 16.The selectivity, limits of detection and quantification, linearity,precision, and accuracy were determined. Determination wascarried out using a tablet formulation 3 mg. The presented RP-HPLC method has been proved to be rapid and was successfully used for determination of Glimepiride.

Accuracy/Recovery: Accuracy of the developed method was confirmed byperforming a recovery study as per ICH norms at threedifferent concentration levels (50%, 100%, 150%) byreplicate analysis (n = 3). The results obtained(Table 3) indicate that recovery is good, not less than98% and percentage relative standard deviation is less than 2%.

Precision: The precision of the method was determined byrepeatability, intermediate precision (intra-day, inter-day)and was expressed as % relative standard deviation(%RSD). Intra-day precision was determined byperforming analysis of triplicate injections of two different concentrations of Glimepiride on the same dayat differenttime intervals and on two different days forinter-day precision.The % RSD of the study wasfound to be less than 2% asshown in Table 4.

CONCLUSION: The aim of the present research work was to achieve highest precisionin quantitative estimation of Glimepiridein tabletdosage form. The method was validated in terms of linearity, precision,accuracy, limit of detection and limit of quantification. The developed method has a simple procedure for thepreparation of the samples and shorter run time forchromatographic analysis (less than 6 min). Hence the proposedRP-HPLC method can be considered as simple, rapid,suitable and easy to apply for routine analysis of Glimepiride in pharmaceutical dosage form.