EFFECT OF CHROMIUM ON IN-VITRO GROWTH AND ANTIOXIDANT POTENTIAL OF DIANTHUS CARYOPHYLLUS L.

EFFECT OF CHROMIUM ON IN-VITRO GROWTH AND ANTIOXIDANT POTENTIAL OF DIANTHUS CARYOPHYLLUS L.

ABSTRACT: Catalase, guaiacol peroxidase and polyphenol oxidase are antioxidant enzymes that are important in the metabolism of reactive oxygen species and can be induced by environmental stresses including chromium (Cr), heavy metal toxic to living organisms. In-vitro regenerated shoots of carnation (Dianthus caryophyllus L.) were exposed to K2Cr2O7, and the activities of these antioxidant enzymes were analyzed. A significant reduction in the POD activity was observed at 2nd week of culture, followed by a slight increase in the activity in the 4th week of culture. Maximum PPO activity was detected during the 3rd week of culture, which was comparable to the control cultures. A significant reduction in CAT activity was found in the 4th week. The chlorophyll content did not change significantly in the shoot buds developed up to 4th week of culture.

INTRODUCTION: The genus Dianthus belongs to family Caryophyllaceae. It comprises around 300 species, of which D. caryophyllus (commonly known as carnation) is the commercially most important cut flower of the world. Due to its excellent keeping quality, a wide range of forms, the ability to withstand long-distance transportation and remarkable ability to rehydrate after continuous shipping, it is preferred by growers to roses and chrysanthemums in several flower-exporting countries 1. To fulfill the increasing demand and to establish an efficient reproducible system for transformation studies, numerous micropropagation protocols have been devised via organogenesis 2-6 and somatic embryogenesis 7-10 in Dianthus sp.

Enhanced in-vitro growth is a multi-factorial event. Induction by diverse plant hormones is generally considered to be the most important factor and is by far the most widely studied. Another factor, which has been increasingly recognized in recent times, is the addition of heavy metals in culture medium for improved plant regeneration. A review of some exemplary evidence-based research and approaches resulted in wider acceptance of several heavy metals as culture medium components. Also, natural or artificial selection systems can be set to select the heavy-metal tolerant genotypes or populations adapted to toxic concentrations of metal ions. Especially for urban areas, ornamentals can beautify the environment and also resolve heavy metal pollution at the same time. It will have great and practical significance to screen out remediation plants from ornamental resources 11.

According to an elementary experiment from herbaceous ornamentals, Calendula officinalis 12, Coronopus didymus 13, and Malva rotundifolia 14 had strong Cd tolerance.

Plant tolerance to a particular metal is governed by an inter-related network of physiological and molecular mechanisms, to be understood essentially for developing plants suitable for phytoremediation of the contaminated sites. Plant capability for hyperaccumulation can be improved by genetic manipulations or the chelator-regulated strategies. The problem of low-biomass phytoremediators can be overcome by increasing plant yield and metal uptake by engineering common plants with hyper accumulating genes 15, 16.

Improvement of plants by genetic engineering, i.e., by modifying characteristics like metal uptake, transport, and accumulation and plant’s tolerance to metals, opens up new possibilities of phyto-remediation 17-19. Considerable research has been focused an assessing metal tolerance in plants using tissue culture techniques 20-24. Tissue cultures are useful in developing stress-tolerant cell lines in a relatively short period. Thus, metal toxicity appears to be an area where emerging methods in plant tissue culture may complement conventional crop improvement programs by providing additional means of screening and/or selection for improved levels of tolerance.

Therefore, the aim of this work was to identify the tolerance levels or the effect of Cr on in-vitro regenerated plantlets and to study the activity of certain antioxidant enzymes of D. caryophyllus.

Enzymatic Activity: In-vitro shoots developed on 7, 14, 21, and 28th day were used for enzyme extraction. For total enzyme extracts, 1g tissue was homogenized with a mortar and pestle in 2ml of ice-cold 50 mM potassium phosphate buffer (pH 7.0) containing 1 mM EDTA, 1 mM sodium ascorbate and 0.5 M NaCl. After centrifugation (20,000 × g, 20 min) the supernatant was used for the determination of catalase, peroxidase and polyphenol oxidase activity.

Peroxidase Assay: Peroxidase (POD, EC 1. 11. 1. 7) activity was assayed by Guaiacol-H2O2 method 28. The reaction mixture was made by mixing 0.2 ml enzyme extract, 1 ml of 1% Guaiacol, 0.2 ml of 50 mM H2O2. Peroxidase activity was determined spectrophotometrically by monitoring the formation of tetraguaiacol at 470 nm after every 15 seconds. One unit of peroxidase activity corresponds to the levels of enzyme activity were expressed as moles of H2O2 destroyed/min/mg protein.

Chlorophyll (Chl) Estimation: Chlorophyll was estimated in the periods for 0, 7, 14, 21, and 28 days of treatment by the method of Arnon 29. 1g regenerated shoots (4 weeks old) were chilled in deep freeze (-20 ºC) and then homogenized in 80 % acetone, centrifuged at 10,000 rpm for 10 min. The supernatant obtained was used for chlorophyll estimation. The absorbance of the supernatant was read at 645 nm and 665 nm against 80% acetone solvent. The amount of chlorophyll was calculated according to the following equation and the total amount of expressed as mg chlorophyll/g fresh weight:

Where, A = absorbance at a specific wavelength

Rooting and Acclimatization: Shoots upto 2 cm and more in length were excised and transferred on to rooting medium consisting of full-strength MS medium supplemented with 0.5mg/l IBA. Plantlets with a well-developed shoot and root systems were carefully taken out and washed with tap water to remove agar. These plantlets were then transferred to earthen pots containing garden soil and organic manure (1:1). Humidity was maintained initially by covering the pots with polythene bags. The experiment was repeated three times.

Statistical Analysis: Three repetitions per treatment were made, and enzyme activities were assayed three times. The mean of all repetitions and standard deviation of each observation from the mean was calculated from the data obtained.

The cultures were examined after five weeks. Data were subjected to one-way analysis of variance (ANOVA) by Fischer’s least significant difference (P = 0.05).

RESULTS: Nodal explants were cultured on MS medium supplemented with 2.2 µM BAP + 2.7 µM NAA and different concentrations of K2Cr2O7 (0, 2, 4, 8, 10, 25µM). There was an obvious difference in the shoots between the treated and the untreated (control) cultures. Incorporation of K2Cr2O7 in the medium induced positive response. The explants showed swelling during the first week of culture. The initiation of shoot bud induction occurred at the end of the second week of the culture. It was observed that the number of shoots increased with the increase in the concentration of K2Cr2O7 from 2 to 10µM beyond which at 25µM, the number of shoots did not increase in Table 1. Hyperhydric condition of shoots was not observed in cultures grown in medium incorporated with K2Cr2O7 Fig. 1, which is a major problem in Dianthus cultures. 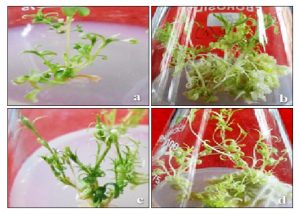 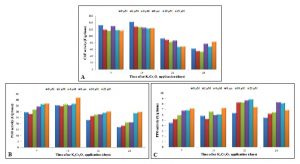 DISCUSSION: The tissue culture studies can augment the study of uptake behavior of nutrient and non-nutrient elements by providing intact plants for the quantitative estimate of the potential of heavy metal tolerance and also to study certain kinetics involved in the root absorption and subsequent transfer to shoots while maintaining the physiological and structural integrity of the system. The present investigations have shown the tolerance levels of in-vitro regenerated D. caryophyllus plantlets to increasing levels of potassium dichromate.

The most widespread visual evidence of metal toxicity is a reduction in plant growth as metal toxicity increases. However, as different metals have different sites of action within the plant, the overall visual toxic response differs between metals. Chromium compounds are highly toxic to plants and are detrimental to their growth and development. Although some crops as not affected by low Cr concentration 30, Cr is toxic to most of the higher plants at 100 µM.kg-1 dry weight31. In the present study, the highest level non-toxic to carnation plants was found to be 10 µM. Hence the minimum level of intolerance incarnation was found to be 25 µM in-vitro.

Chromium is a non-essential element and considered toxic to plants at very high concentrations 31. The range of high Cr concentrations in plant tissues before toxicity symptoms was observed was from about 5 ppm for barley, corn, oats, and citrus to 175 ppm for tobacco 32. In the present study, Dianthus cultures could grow at minimal levels of chromium, and increased amounts too led to regeneration but with pale-colored shoots. The excess of metals has been reported to have deleterious effects on the content and functionality of the photosynthetic pigments 33. This can be caused by the inhibition of the pigment synthesis, the formation of metal-substituted chlorophylls of reduced functionality, or the direct oxidative damage of the pigments 34. Several authors have reported damages on the reaction centers or the peripheral antennae complexes of PSII in response to high concentrations of metals 35.

Tissue culture responses are greatly influenced by three main factors viz. whole plant physiology of donor, in-vitro manipulation, and in vitro stress physiology. In-vitro cultures are also good models for studying the effect of different metals on the oxidative stress and antioxidants that follow. Under Cr heavy metal stress, the overall antioxidant activity was found maximum at the highest concentration (25µM). The activity of CAT, POD, and PPO increased significantly in cultures exposed to Cr supplemented media. The function of these enzymes is to scavenge the toxic radicals produced during oxidative stress and thus help plants to survive through such conditions.POD induction is a general response of vascular plants to the uptake of a toxic amount of metals 36. Also, PPO has been reported to function in oxygen scavenging by oxidation of phenols 37.

CONCLUSION: Although this study did not take into consideration the whole plant, the observations made herewith in-vitro cultures may supplement the known facts and can be beneficial for the production of metal tolerant carnation plants.

ACKNOWLEDGEMENT: Authors are grateful to The IIS University for providing all the laboratory facilities required to conduct this work. Financial assistance in the form of Enhanced Seed Grant by Manipal University Jaipur is also highly acknowledged.

CONFLICTS OF INTEREST: Authors have no conflict of interest.