INTRODUCTION: Mushrooms have been recorded as a source of vegetable and medicines for human beings throughout the world. They are generally divided into edible and non-edible. Mushroom fruit bodies are well known food items since ancient times and became important as nutraceutical and pharmaceutical agent due to the capability of producing many useful secondary metabolites, high protein content with essential amino acids, vitamins, minerals and exopolysaccharides 1. Agrocyba aegerita mushroom with high economic, nutritional, and pharmaceutical value. Mushrooms have become attractive as a functional food and as source for the development of drugs and nutraceuticals 2, 3 namely for antioxidant 4-10 and antimicrobial compounds 11.

In nature mushrooms grow wild in every country from snowy mountains to sandy deserts on all types of soils, pastures, forests, cultivated fields or water lands. They appear in all seasons, chiefly during the rainy weather, wherever organic matter or its decomposition products are available 12. Many fungi and their mycelium biomass are reported as good source of food, protein supplement, lipid source and many more metabolites 13, 14, 15.

The media listed above, with the exception of compost agars, are all devoid of insoluble material and are rich in simple sugars, few of which are encountered by the mushroom on its 'natural' substrate. The insoluble fraction, which includes lignin’s, cellulose, hemicelluloses, protein and microbial biomass, is preferentially used by the mushroom mycelium for growth 16.

Mushrooms are amongst the most popular food items accepted the world over. The increased consumer demand over the years has resulted in production of mushrooms in large proportions 17 through cultivation which is a highly efficient method for recycling the agricultural residues so as to produce nutritious food 18.

Today China is the major producer of mushroom in the world 19. In the present study, stock culture of vigorous growing mycelia of Agrocyba aegerita, was cultivated on different media (i.e.) YMA, PDA, SDA, GPA and MEA and their mycelial growth rate was determined. The purpose of the present study was to determine the most suitable media, for the growth of the mushroom.

Collection and Maintenance of A. Aegerita Culture:

The pure culture of A. aegerita was obtained from the Directorate of Mushroom Research (DMR), Chambaghat, Solan, Himachal Pradesh and were used for mass culture production.

Following media were used for the purpose:

All five media were prepared according to above mentioned composition.

The flasks having media were sterilized in the autoclave at 15lb/sq. inch pressure for one hour and then poured in 90 mm Petri dishes under the laminar flow hood to avoid contamination. Media were cooled to 37oC. The joint, stalk and veil of the fresh mushrooms were inoculated on culture media.. Radial growth of mycelium of different portions was observed until the Petri dishes were filled with it. The experiment was repeated for 5 times. The plates was incubated at 370C and observed for 15 days during which the mycelial vegetative growth and mycelial density of Agrocyba aegerita were recorded.

The mycelial density was rated as described 20 as follows:

The growth rate is given by the formula below:

Daily mycelial growth was determined using a ruler across the Petri-dish horizontally. 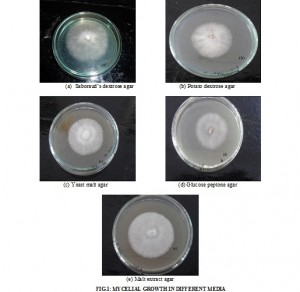 Hence, malt extract agar medium was found to be an ideal media for growth of these mushroom cultures. Mycological peptone present in the malt agar rapidly gives a luxuriant growth with typical morphology and pigmentation.

Mycelium is an important part for mushroom production as well as for production of several secondary metabolites used for therapeutic purpose. The mycelium growth depends on several factors such as growth media, pH, temperature, nutrient elements and some environmental factors 21. Growth   medium is the most important factor because it supplies necessary nutrient for the growth of mushroom mycelium.

CONCLUSION: Since mushrooms are good source of bioactive compounds of anticancer, antifungal and anti-diabetic in nature, the mycelia may be used for the large scale production of the compounds as mushrooms are seasonal. To make the bioactive production technology cost effective, present study may be useful in order to obtain more biomass ultimately to have bioactive compounds in hand. Further standardization regarding quantification of substrate as nutritional source for biomass production and its cost economics is required to reach more constructive conclusion