ABSTRACT: BCS class II drugs usually suffer inadequate bioavailability as a dissolution step is the absorption rate-limiting step. In this work, the effect of solubility increase at the main absorption site for these drugs was investigated using ritonavir as a drug model. The liquidsolid technique was applied to prepare ritonavir per-oral tablets of high dissolution rate using versatile non-ionic surfactants of high solubilizing ability [Transcutol HP, labrasol and labrasol/labrafil (1:1) mixture] as liquid vehicles at different drug concentrations (10–30%) and fixed (R). The prepared liquisolid tablets were fully evaluated, and the dissolution rate at pH 1.2 was investigated. The formula of higher dissolution rate was subjected to solid state characterization using Differential Scanning Calorimetric (DSC), Infrared Spectroscopy (IR). Results showed that liquisolid tablet prepared using labrasol/labrafil (1:1) mixture as a liquid vehicle containing 10% ritonavir is a compatible formula with a higher dissolution rate (100% in 35 min). This led to the conclusion that liquisolid technique efficiently improved the drug solubility and dissolution rate of BCS class II drugs.

INTRODUCTION: To get a significant plasma drug concentration a desired pharmacological action is required. The plasma drug concentration is related to solubility in GI fluids 1. The presence of the drug in solution form is important for drug absorption mechanisms from GIT 2. According to BCS classification system, poorly water-soluble drugs are categorized as Class-II. In these, dissolution is the rate-limiting step in the absorption process.

For such drugs improvement of drug solubility and dissolution is the main challenge after oral administration 3. Till date, different techniques had been designed for improving the solubility characteristics of poorly water-soluble drugs.

Some of these include solvent change co-precipitation 4, solid dispersion 5, inclusion complexes with β-cyclodextrins 6, nanosuspensions 7, microencapsulation 8, soluble salts formation 9, lyophilization 10 and liquisolid technique 11. The liquisolid technique is a recent one for the improvement of solubility of insoluble drugs. In this technique for the preparation of liquid medication, the poorly soluble drug is dissolved or suspended in a water-miscible non-volatile solvent. As per mathematical model described by Spireas 12 to get dry, flowable, good compressibility powder mixture characteristics the liquid medication is mixed with selective powder additives of significant absorbing/adsorbing carrier and coat characteristics 13.

This mathematical model depends on the flowable liquid retention potential (T-Value) of both carrier and coat materials at the selected carrier/coat ratio (R) to calculate the formula liquid load factor (Lf) which is directly used to calculated the amounts of carrier and coat materials that are usually enough to maintain good flow and compression properties to the prepared liquisolid compact 14, 15. The liquisolid technique is highly suggested for larger pharmaceutical applications because of its simple, economic and easily applied on industrial scale. This method also has improved photostability characteristics and photo protective action of the selected excipients (carrier and coat) can be an alternative for the conventional tablet coat 11, 15. For the application of this technique ritonavir, a BCS class-II drug was selected for improved solubility and dissolution rate at the main absorption site.

Preparation of Ritonavir Liquisolids: For the preparation of ritonavir liquisolids carrier/coat mixtures were prepared by using avicel PH 102 and nanometer-sized amorphous silicon dioxide with R equal to 20. 16 The Ø-values of the carrier and the coating materials were calculated for transcutol HP, labrasol, PEG 400, tween 20 and labrasol/labrafil 1:1 mixture. For determination of the amount of carrier required was calculated from Lf-value and while the coating material amount was calculated from R-value 12.

In a porcelain mortar, the drug (4mg) was manually mixed with each of the non-volatile water-miscible vehicles to prepare homogeneous mixtures of different drug concentrations are ranging from 10 to 30%. To the prepared liquid solutions, avicel PH 102 was added under continuous mixing followed by nanometer-sized amorphous silicon dioxide to absorb the excess fluid. This mixing order was suggested to favor optimal release rate 17. Finally, the prepared liquisolid mixtures were compressed on a suitable punch after addition of 10% of pharmaburst 500 SPI (as disintegrant). The constituents for each formula are listed in Table 1. A batch of 50 tablets for each liquisolid formula was prepared.

Evaluation of the Prepared Liquisolid Compacts: These include pre-compression & post-compression evaluation.

Pre-compression includes the evaluation of an angle of repose, compressibility index and hausner ratio was calculated to understand the flow and compression properties of prepared liquisolid mixtures. Post-compression evaluation includes weight variation, hardness, friability, content uniformity and disintegration time and all these quality control tests were applied onto 10 liquisolid tablets sample from each formula according to standardized Pharmacopeial Indian Pharmacopeia conditions.

In-vitro Dissolution Studies: The drug release rate from the prepared liquisolid formulations was investigated in the USP XXIV dissolution testing apparatus II in 900 ml of 0.1N HCl as the dissolution medium maintained at 37 ± 0.5 ○C at 50 rpm. At pre-determined time intervals (5, 10, 15, 25, 35, 45, 60 and 90 min) 5 ml sample was withdrawn with replacement. The absorbance of the drug was spectrophotometrically measured at λmax 235 nm after filtration on 0.45 membrane filter. The cumulative percentage of drug release was calculated using an equation obtained from a previously constructed standard calibration curve. For comparison, the dissolution rate of the drug from conventional tablets prepared using the same excipients without adding the liquid vehicle by direct compression was also determined. The mean of six determinations was considered.

Optimization of the Prepared Liquisolid Formulation: Based on the pre,post-compression & dissolution studies a formulation was selected having better drug release rate & subjected to further evaluation, it includes.

Differential Scanning Calorimetric (DSC) Studies: Samples  (2.5-4 mg) were separately weighed into an aluminum pan of differential scanning calorimeter (ToshvinDSC-60, Temp Check), calibrated with purified indium standard (99.9%), and continuously purged together with a blank  with nitrogen gas over a temperature range of (10-400 ○C) at heating rate of 10 ○C/min. The differential Scanning Calorimetric (DSC) thermograms were recorded and analyzed.

Infrared Spectroscopy (IR): Samples (2-4 mg) were separately mixed with about 400 mg of dry potassium bromide powder and compressed into transparent disc under pressure of 10000 to 15000 pounds/inch2; and scanned in the range of 4000-500 cm-1 at ambient temperature using IR spectrophotometer (Bruker, Model-Alpha, Germany) their IR spectra were recorded and analyzed.

RESULTS AND DISCUSSION: According to the compositions shown in Table 1, 15 different ritonavir containing liquisolid formulations were prepared as per the previously mentioned method. In this liquisolid mixture was varied from 10-30%. In addition to the commonly used solvents PEG 400 and tween 20, versatile non-ionic liquid surfactants (namely, transcutol HP, labrasol and labrasol/ labrafil 1:1 mixture) were applied as non-volatile water-miscible vehicles to prepare different liquisolid formulations of higher drug release rate.

As per Khanfar et al., It was proven that the drug release rate from the liquisolid mixture depends mainly on the drug solubility in the applied water miscible liquid vehicle 18. So, selection of the previously mentioned non-ionic surfactants as liquid vehicles was based on their high solubilization power as described by their high HLB values 19.

Pre-Compression Characterization: To get a uniform product, the powder mixture must have uniform flow into the dies 20. The angle of repose, compressibility index, and Hausner ratio are the quantitative parametric indicators to describe the powder flow. In the present research, all prepared liquisolid mixtures can be considered of acceptable flow properties, where the angle of repose ranging from 29.47○ to 31.98○, percentage of compressibility of maximum 18.98% and Hausner ratio values close to unity Table 2. As the good flow is the large barricade and also a principal target in the liquisolid technique, these results indicate the accuracy of the basic calculated parameters including carrier and coat Ø-values for used non-volatile water-miscible vehicles and Lf-value at the selected carrier/coat ratio.

Post-Compression Characterization of the Prepared Ritonavir Liquisolid Tablets: The above Table 3 describes the different post-compression parameters of prepared ritonavir liquisolid tablets. In this, the content uniformity & hardness of all 15 formulations were found to be 96.98–100.32% & 3.87-5.32 kg/cm2 respectively and these values are within the Pharmacopeial limits with small acceptable weight variation.   pharmaburst 500 SPI (Co-processed blends of mannitol, starch, crospovidone, croscarmellose sodium, colloidal silica, and silica) was applied as an efficient superdisintegrant of high drug compatibility, superior organoleptic properties, high solubility and very rapid disintegration due to combined wicking, swelling and elastic characteristics of croscarmellose sodium and crospovidone content. This could clearly explain the rapid disintegration of all prepared liquisolid tablets (72–120 s) 21.

Dissolution Data of the Prepared Ritonavir Liquisolid Tablets: All prepared ritonavir liquisolid tablet formulations showed higher drug release rates in comparison to ritonavir powder and the conventional tablets up to 90 min, where percentage drug dissolved reached only 34.6% and 49.8% for ritonavir powder and conventional tablets, respectively while this percentage exceeded 80% and up to 100% from the prepared liquisolid tablets within the same time. Further, investigation of the dissolution data showed that the drug release rate from liquisolid tablets varied with the applied liquid vehicle type and concentration. The percentage of drug released after 90 min from liquisolid formulae containing tween 20 (F10–F12) as liquid vehicle was 84.6, 82.4.7 and 80.2% while the percentage was 92.4, 88.6 and 86.2% from formulae containing PEG 400 (F7–F9) at drug concentration of 10, 20 and 30%, respectively. Liquisolid formulations containing transcutol HP, labrasol and labrasol/labrafil (1:1) mixture as liquid vehicles showed higher drug release rate, where the percentage of drug released reached 90-95% within 60 min at all drug concentrations, and this could be related to the high solubilizing power of these vehicles. 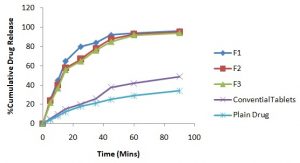 This could clearly explains the high increase in drug dissolution rate from these formula and also describes the effect of vehicle concentration, where the percentage of drug released from transcutol HP containing liquisolid formulation (F1–F3) was 85.8, 88.6 and 92.8% in comparison to 94.2, 90.1 and 94.2% from labrasol containing formulation (F4–F6) in only 45 min at drug concentration of 30, 20 and 10%, respectively. Labrasol based formulations usually suffer drug precipitation on dilution within aqueous media, this precipitation process decreases the amount of drug available for absorption which is a principal cause of decreasing the oral bioavailability, especially for poorly water-soluble drugs. Mixtures of labrasol with other pharmaceutical additives including lipids, surfactants, and co-solvents significantly inhibit and retard this precipitation process on dilution 22.

So in this work, labrasol/labrafil (1:1) mixture was applied as a liquid vehicle of high a powerful solubilizing power and higher drug tolerating ability. Results showed that the drug was completely dissolved in 45 min and the percentage of drug released was 94.5, 98.8 and 100.1% from labrasol/ labrafil (1:1) containing formulae (F15–F13) as liquid vehicle after only 35 min at a drug concentration of 30, 20 and 10%, respectively.

Solid-State Characterization: Results of solid-state characterization of the selected liquisolid tablet formula (F13) are summarized below.

Evaluation by Differential Scanning Calorimetry: DSC was used to evaluate drug-excipient interactions in the liquisolid compacts. The DSC thermograms of ritonavir & optimized formulation are shown in Fig. 8.

The DSC thermogram of ritonavir showed a sharp endothermic melting peak at 125.4 °C indicating the purity of the used drug sample. In physical mixture sample, this peak retained in the same position with lesser intensity (mainly due to drug dilution within the mixture) indicating compatibility of the mixture. The DSC thermogram of the selected liquisolid formula mixture (F13) showed a complete disappearance of the drug melting peak and decrease in melting enthalpy to be an evidence of loss of drug crystallinity mainly due to dissolution within the prepared formula mixture in an amorphous form, the absence of any additional peaks within the thermogram insures absence of any interaction and chemical compatibility within the liquisolid formula mixture. The melting peaks observed were in good agreement with the literature value of ritonavir. The melting peaks were observed at the same temperature for the pure drug as well as its liquisolid compacts. The FTIR and DSC studies, thus, indicated no interaction between ritonavir and excipients. 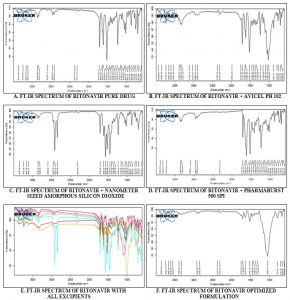 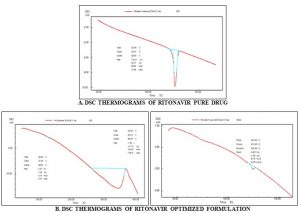 The prepared labrasol/ labrafil (1:1) based liquisolid formula at 10% drug concentration showed rapid dissolution, and the complete drug release (100%) occurred only within 35 min. All these data led to the conclusion that solubility increase of BCS class II drugs at their main absorption site significantly increases their bioavailability.

ACKNOWLEDGEMENT: Authors are thankful to Aurobindo Pharmaceuticals Limited for providing drug and excipients.