EVALUATION OF ANTI-DIABETIC AND HEAPATOPROTECTIVITY OF CORIANDRUM SATIVUM IN ALLOXAN INDUCED EXPERIMENTAL ANIMALS: A HISTOPATHOLOGY STUDY

EVALUATION OF ANTI-DIABETIC AND HEAPATOPROTECTIVITY OF CORIANDRUM SATIVUM IN ALLOXAN INDUCED EXPERIMENTAL ANIMALS: A HISTOPATHOLOGY STUDY

ABSTRACT: Objective: Diabetes mellitus is metabolic disorder and day by day number of people increased across the world. The aim of the present study was to evaluate the antidiabetic and heapatoprotectivity of ethanolic extracts of Coriandrum sativum in alloxan induced diabetic rat and find out the harmonious activity of the extract. Methods: The alloxan (150 mg/kg, i.p) used for induction of diabetes after making diabetic model the ethanolic extract of Coriandrum sativum leaves used at a dose of 200 and 400 mg/kg b.w. respectively for single extract treatment for four weeks including metformin (200mg/kg b.w) as a reference drug. The statistical analyses were carried out by one- way ANOVA with post-hoc by Dunnett's Multiple Comparison Test. Results: After 28 days treatment the extracts significantly (p<0.001) reduces serum glucose level and recovered liver function tests (p<0.001) (SGOT, SGPT, ALP and bilirubin) as well glycosylated haemoglobin (p<0.001). Histopathological study showed amelioration in alloxan treated groups. Conclusions:   The result suggested that anti-antidiabetic and heapatoprotectivity potential of Coriandrum sativum.

INTRODUCTION: Diabetes mellitus (DM) is a metabolic disorder which is characterized by hyperglycemias and disturbance of carbohydrate and glycogenolysis and gluconeogenesis fat and protein metabolism. According to WHO, number of people increased from 171 million to 300 million in 2030. DM is associated with chronicle higher risk including heart attacks, blindness, kidney failure and neuropathy 1.

A medicinal plant is being used from ancient time for the treatment of diabetes. In harmony with to ethno botanical information, more than 800 medicinal plants are beneficial for curing of diabetes. But in which few are effective for curing. Herbal medicine are widely used by the people, throughout 80 % population in world used it due to its lesser side effect, efficacy and in expensive 2.

Collection and Preparation of Coriandrum sativum ethanolic extract: Fresh leaves of Coriandrum sativum were collected from company garden, Allahabad were identified by Dr. S.L. Gupta, scientist–E & Head, Botanical survey of India, Allahabad (BSI/CRC/BS-2/2014-2015). The fresh leaves of Coriandrum sativum (1000gm) were washed thoroughly with distilled water, dried without exposure of sun light and powdered used for extraction. It was kept in 70% ethanol for four days. The resulted extract was filtered with Whattmann filter paper no-1 and concentrated by soxhlet apparatus for 12 hr at 30º C. Ethanol was evaporated using rotary evaporator under reduced pressure and low temperature it is stored in air tight containers at 10º C. The yield was 12.21 %.

Albino Wistar rats either same sex and body weight of 150–200 gm were selected for the experiments. The animals were kept under standard condition, fed with pellet diet and water ad libitum. Permission for the experiment was approved by Institutional Animal Ethics Committee Guidelines (UIP/IAEC/APRIL-2015/08).

12 hr fasted rats were made diabetic by injecting alloxan monohydrate (was taken up in NaCl) at a dose of 150 mg/kg body weight. After alloxan induction, rats with hyperglycemia were made likely by tail vein blood glucose level with the help of glucometer.

Animal model and Measurement of Biochemical parameters: The rats divided into following groups with six rats in each.

Group I (Control) served as normal and received the vehicle alone.

After the 28 days, animals were sacrificed and blood was collected by the orbital sinus puncture method of Herck, et al., 1998 10. Blood was collected in a dried centrifuged tube and allowed to clot. Blood was centrifuged at 3000 rpm for 15 min at room temperature. The serum was collected carefully and kept at -20° C until analysis biochemical analysis. Meanwhile, other biochemical parameters (SGOT, SGPT, ALP, total bilirubin, glucose and glycosylated) were estimated according to the protocol of the manual of diagnostic kits.

At the completion of experiment all groups animal sacrificed under using mild anesthesia (Diethyl ether) and liver dissected out from the animal for histopathology. Liver tissue fixed at 10% formalin. The tissues were dehydrated in 30% to 100% absolute alcohol for 15 minute. The tissues were cleaned in absolute alcohol with xylene (1:1) and then in pure xylene for one hour. Then after passing through a mixture of xylene and molten wax (1:1) for one hour, it was embedded in molten paraffin wax. The Blocks were made using L- moulds and staining with Hematoxylin - eosin.

All results were expressed as mean ± standard deviation (N=6) .A statistical analysis was analysed by one way analysis variance (ANOVA) with the help of  Dunnett's Multiple Comparison Test using graph pad In Stat version 5. At significant value is p<0.001.

Diabetic was made by alloxan and anti-diabetic activity of ethanolic extract of C.S leaf on alloxan induced rats was presented in Fig.1. The activity of serum glucose level (304.5±4.42 mg/dl) was significantly increased (p<0.001) in alloxan treated group compared to normal level (85.96±5.37 mg/ dl). Whereas oral administration with ethanolic extract of Coriandrum sativum leaf at different dose (200 and 400 mg/kg b.w) significantly decreased (p<0.001) was observed in alloxan induced diabetic rats. Which were showing prominent antidiabetic role of C.S leaf extract. On the other hand standard drug (metformin) showing decline the blood glucose level (179.7±4.70 mg/ dl) as compared to alloxan treated group. 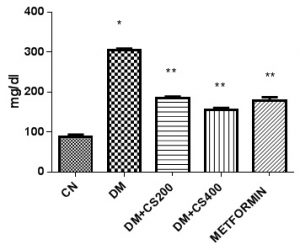 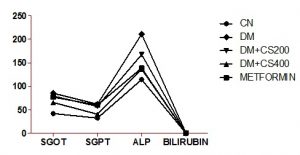 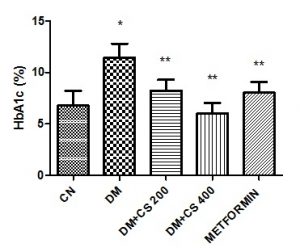 In Fig.4 showed normal structure of liver tissue, where as Fig.5 revealed change due to alloxan induce in rats, structure of central vein and hepatocytes were abnormal. Oral feeding of ethanolic extract of Coriandrum sativum leaf on diabetic rats, its showed towards to normal (Fig.6-7). However, standard drug treated group, there was slightly changes its structure (Fig.8). 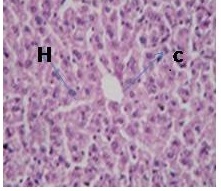 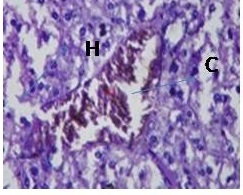 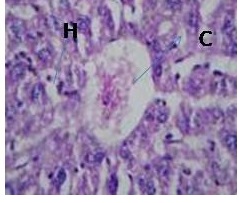 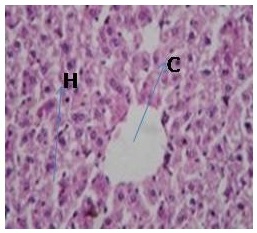 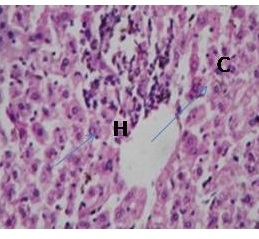 DISCUSSION: Medicinal herbs are used widely for curing of diabetes mellitus, these herbs have contained prominent biochemical constitute which can act as precursor of diabetes and antioxidant.

In the present investigation alloxan (150 mg/kg b.w) was used to prepare diabetic model and serum glucose level was found to be significantly higher than in normal albino rats 11.  Alloxan is a diabetogenic agent which destructs β-cells of the islets of largerhans and increased hyperglycemia 12.

On the other hand, treatment of ethanolic extract of Coriandrum sativum leaves on diabetic induced rats for four weeks, the elevated level of serum glucose were decreased. Our finding is in agreement with that of Sreelatha and Inbavalli, 2012 13. The treatment of Coriandrum sativum leaves on alloxan-induced diabetic rats was found to significantly lower blood glucose levels. Such hypoglycaemic effect has also been reported in various medicinal plants 14-17. Significantly decreased the blood glucose level in alloxan induced diabetic rats by an ethanolic extract due to decrease intestinal glucose absorption and regain extra pancreatic activity including the invigoration of peripheral glucose utilization or incitement of glycolytic glucose utilization process with conterminous decrease in glyconeogenis 18

Liver plays an important role in monitoring and stabilizing glucose level so it may be considered glucostat monitor. The present results showed that injection of alloxan induces a hepatocellular damage, which is indicated by a significant increase in AST, ALT and ALP in the diabetic group as compared to control groups. Elevated level showed that AST, ALT and ALP impaired liver function 19 Similarly, many scientists have reported that alloxan increased the activities of transaminases in the liver, which leads to gluconeogenesis and ketogenisis metabolism in diabetics 20. In addition Rangachari et al 21., reported that these liver marker enzymes increased in plasma due to leakage from the liver cytosol into the blood stream.

Our findings related to increased level of bilirubin in diabetic rats followed by subsequent decrease in its level on treatment with Coriandrum sativum leaves extract are consistent with the reports of other workers 24-25. Further that, our results is similar to other workers whose finding with another plant 26-28.

CONFLICT OF INTEREST STATEMENT: All authors have none to declare.

ACKNOWLEDGEMENT: The authors are legitimate  thanks to Mr. Sunil Sharma (chancellor) and  Dr. Sudhansu Sharma (chief mentor) of Suresh Gyan Vihar university , Jaipur India for  valuable support for this work  Authors are also thanks Dr. Alok Mukerjee Principal of the United Institute of Pharmacy (Allahabad, India) for providing the animal housing facilities to perform the animal studies.

All © 2013 are reserved by International Journal of Pharmaceutical Sciences and Research. This Journal           licensed under a Creative Commons Attribution-NonCommercial-ShareAlike 3.0 Unported License.