ABSTRACT: In recent decades, advances in nanoscience have resulted the rapid development of many novel technological applications for nanoparticles (NPs) in various in Biomedical Sciences. Iron is essential for eukaryotic biochemistry and is an important element in several metabolic processes such as, carrier for oxygen transportation, cell respiration, synthesis of genetic material and protein synthesis. The nematodes Caenorhabditis elegans (C.elegans) represent an excellent organism to investigate the phenotypic effect of different type of nanomaterials on the molecular, cells and entire organism level. C.elegans is widely used in studies of homeostasis, neurolagenerative and metal toxicity. The size of iron oxide and other nanoparticles plays a major role in target cell uptake and elimination from the body. The excess iron damage nucleotides (DNA/RNA) and Protein due to catalyzes the generation of Reactive Oxygen Species (ROS) , while cellular iron deficiency causes cell cycle arrest and cellular death of an organism. Systematic storage and trafficking is required to regulate supply of iron while preventing it from catalyzing unwanted reactions. We have used 36 nm size iron oxide nanoparticles, prepared by Ayurvedic method and investigated the effect of manipulating iron oxide nanoparticles on aging and age related phenotype. Iron oxide nanoparticles enhance the toxicity in C.elegans. In this present article, we report phenotypically study of iron oxide nanomaterial on age-related elevation, average life span, bending and spontaneous movement. The damaging reactive oxygen species which causes decreases the average life span of C.elegans.

INTRODUCTION: The “Nano” is the newly used word but in “Ayurveda” science in the form of “Ash” or Bhasma 1. Invertebrate’s animal models such as nematodes C.elegans are widely used in nanotechnological applications 2. Researchers look forward in this area of worm behavior by NPs-bio interaction to evolution of organismal nanomaterial safety.

Despite of the broad spectrum of investigated NP-bio interaction of nanomaterial with respect to aging process in C.elegans and has a number of features that make it a powerful tool for the pharmaceutical industry and laboratory 3.

The C.elegans has developed into an important model for biomedical research, particularly in the functional characterization of novel drug targets that have been identified using genomics technologies. The cellular complexity and the conservation of disease pathways between C. elegans and higher organisms, together with the simplicity and cost-effectiveness of cultivation, make for an effective in vivo model that is amenable to whole organism high throughput compound screens and large-scale target validation 4. C. elegans is a 1-mm long free-living soil nematode widely used in biomedical science as a model organism. Its key attributes as an experimental system, including its simplicity, short life cycle, small body size, transparency, and sequenced genome together with the ease of cultivation in the lab, make C. elegans a promising animal model to evaluate nanoparticles in vivo 5.  Our objective is to use C. elegans in the primary screening of nanoparticles with biomedical applications within the manufacturing lab, in order to validate their use, to optimize their design, and to study their toxicity.

We trace NPs in individual cell of adult C.elegans and correlate particle distribution with the worm metabolism and organ function. The nematodes C.elegans represent an excellent model to investigate the effect of different type of nanomaterial on aging at the molecular, cellular and whole organism level. C.elegans is widely used in studies of metal toxicity and metal homeostasis 6.  Altering the level of various metals in growth media causes developmental delays and abnormalities along with diminished fertility. Fe, Mn, Cu, and Zn have all been shown to reduce C.elegans life span at various concentrations. But when cells are exposed to very high dose of iron oxide nanoparticles, formation of excess ROS takes place that affects normal functioning of the cell, leading to apoptosis or cell death. Aging is characterized by progressive weakening in protein homeostasis which is altered due to metal toxicity like Fe, Zn, Mg, etc 7. Certain gene involved in age related protein insolubility generally promotes longevity, suggesting that this phenomenon is a detrimental feature of the aging process 8.

In the present article, we report nanocrystalline Lauh bhasma (Iron oxide nanoparticles) and the effect of manipulating normal iron on aging and age related neurolagenerative phenotype and found that dietary supplement. The present study open a window to understand the application of Ayurvedic Lauh Bhasma nanoparticles (as nanomedicine).

C. elegans strains maintaince and assay: C. elegans wild type strains were maintained at 20°C on nematode growth media (NGM) agar plates seeded with E. coli strain OP50. For mean survival assay, L4 stage animals are treated with known concentration of iron nanoparticles, nano iron particles; and analyzed for dead animals till 8 days for live animals. For body bends per minute, Treated worms were counted manually using a dissecting microscope for body bends for 10 second at the age of 5 days of adult hood and then expressed as the mean number of body bends per minute. For spontaneous movements, 10 days adult animals were analyzed for its movement activity in response to touch.

RESULT AND DISCUSSIONS: The results of effect of iron oxide nanoparticles and iron particles on nematodes C.elegen are shown in Fig. A - D.  Annette Piechulek et al., 2 use the soil nematode C.elegans to investigate organismal aging processes and show that silica nanoparticles (NPs) induce premature aging phenotype on the molecular and the behavioral level. By comparative analysis of silica, polystyrene and silver NPs we introduce premature onset of protein aggregation and reduced neural behaviors.

Further, we tested the mean survival animals those are treated with nanocrystalline iron oxide and to validate the role of iron oxide nanoparticles in comparison to particulate normal iron. We found that animals treated with nanoparticles show significantly less live animals in compared to control and particles iron treated animals (Fig. B). Furthermore, the nanoparticles treated animals show less  body bends per minute observed for control was 56.6±4.3, Iron treated(2.5mg/ml), and nanoparticles (2.5mg/ml) treated showed respective values of 36.1±3.6 (p<0.0001, , t-test ), 21.1±3.9 (p<0.0001, t-test) (Fig. C). For spontaneous movements, 10 days adult animals were analyzed for its movement activity in response to touch. The mean value observed for spontaneous movement in control is 25.4±3.9, whereas 2.5mg/ml iron nanoparticles and 2.5mg/ml nano iron particles treated worms showed respective values of 16.1±2.4 (p<0.0001, , t-test), 6±2.6  (p<0.0001, , t-test) (Fig. D). Altogether, this shows that Iron oxide nano particles are effectively kills live animals in comparison to control and iron particles. It might be due to these nanoparticles easily absorbed by live animals.

In this research, it proved that iron oxide nanoparticles enhance the ROS activity inside cells which leads cell apoptosis and death and ultimate early death of worm in compare to normal iron so that in future iron oxide nanoparticle can be used as medicine for treatment of disease causing  nematodes in humans and higher animals. 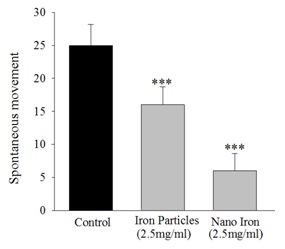 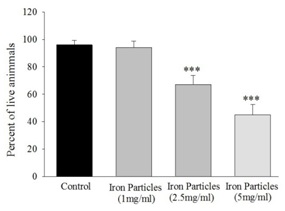 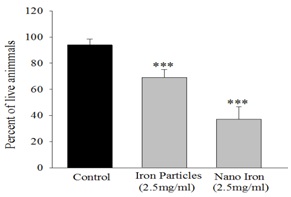 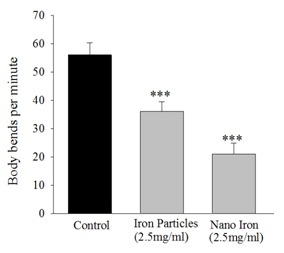 CONCLUSION: The phenotypically study of nanocrystalline Lauh Bhasama on C.elegans revels that life span, aging, body bending and spontaneous movement. We have used 36 nm nanocrystalline iron bhasama particles having the additional properties like magnetization, photoluminescence, etc. Both Iron and Lauh Bhasma (nanocrystalline Iron Oxide) enhances the toxicity in C.elegans. Lauh Bhasma effectively on homeostasis lost during C. elegans ageing, bending, spontaneous movement and its relationship to the age-related elevation which causes decreases the average life span of C.elegans with compare to that of iron particle. This present work gives a new insight the effect of nanomedicine on C.elegans and their phenotypically.