ABSTRACT: Objective: To study the nephroprotective activity of Bauhinia purpurea unripe pods and bark against gentamicin-induced nephrotoxicity. Materials and Methods: Twenty four healthy adult albino rats of either sex (150-200 g) were randomly divided into four groups of six animals each. Group, I served as vehicle control and Group II as the negative control (gentamicin 80 mg/kg/d, i.p). Groups III and IV (test groups) were administered ethanolic extract of Bauhinia purpurea bark (BBE) and unripe pods (BPE) in the dose of 400 mg/kg/day, one hour before gentamicin administration. All the treatments were given for 8 days. On the 9th day, blood and urine samples were used for biochemical analysis and kidneys for histology and assessing anti-oxidant activity. Results: Gentamicin caused nephrotoxicity as evidenced by highly significant (p<0.001) elevation of blood urea, serum creatinine and urine glucose in Group II as compared to Group I. Also administration of Gentamicin in group II caused oxidative stress in rats suggested by significant increase in MDA level and significant decrease in Catalase and Reduced GSH level. While administration of BBE and BPE in group III and IV respectively caused a significant decrease (p<0.01) of blood urea, serum creatinine, and urine glucose as compared to group II. In case of antioxidant status there is significant increase (p<0.01) in Catalase and Reduced GSH level while there is significant decrease (p<0.01) in MDA level was observed in group III and IV. Conclusion: Ethanolic extract of Bauhinia purpurea unripe pods and bark has nephroprotective activity against gentamicin induced nephrotoxicity in rats.

INTRODUCTION: Gentamicin, a commonly used wide spectrum antibiotic is highly effective against severe gram-negative bacterial infections 1. Unfortunately, its high efficacy is associated with the side effect of nephrotoxicity.

This nephrotoxicity in the form of acute renal failure occurs in 10-30% of patients receiving gentamicin 2 - 3. Although it is generally reversible upon drug discontinuation, but it complicates the patient’s condition, prolongs the hospital stay and increases the medical expenditure 4. Proximal tubular necrosis (PTN) underlies the pathogenesis of gentamicin nephrotoxicity 5. But the mechanism of PTN is not understood clearly. However, several studies suggested that reactive oxygen species (ROS) may be an important contributor in the pathogenesis of gentamicin nephrotoxicity 6.

Abnormal ROS production leads to proximal tubular necrosis via lipid peroxidation of membrane lipids, protein denaturation, and DNA damage 7 - 8. From the last few years, tremendous interest has been shown on the role of herbal substances as an antioxidant for the management of various diseases.

Bauhinia purpurea, medium-sized deciduous tree belongs to family Caesalpiniaceae, found throughout India predominantly in sub-Himalayan forests 9. It is commonly known as an orchid tree, lalkachnar, and kaniar. It has been used to treat various human ailments in folklore medicine such as pain, dropsy, rheumatism, convulsion, wound healing, delirium, and septicaemia 10. Based on its folklore uses various pharmacological activities have been reported like analgesic and anti-inflammatory 11, antimalarial, antitubercular, anti-fungal and cytotoxic 12, cardiotonic 13, hypolipidaemic 14, antioxidant 15, hepatoprotective 16 and antidiabetic 17. There is single study, where nephroprotective activity 18 of ethanolic extracts of unripe pods at the dose of 300 mg/kg against gentamicin-induced nephrotoxicity has been studied. In this study, we have evaluated the nephroprotective and antioxidant activities of unripe pods as well as the bark of B. purpurea against gentamicin-induced nephrotoxicity.

Plant Materials: The unripe pods and bark of Bauhinia purpurea were collected from the garden of Aligarh Muslim University, Aligarh during the month of April-May. Collected unripe pods and bark were identified and authenticated by Dr. Athar Ahmed, Assistant professor, Department of Botany, AMU., Aligarh and a voucher specimen with voucher no.DWS/VS/01 was submitted for future reference. Freshly collected unripe pods and bark in bulk were shade dried and pulverized to a coarse powder by the Soxhlet mechanical grinder. The powder was then subjected to extraction with absolute ethanol. The extract thus obtained was evaporated to dryness. Thus the yield obtained was 4.88% (w/v).

Experimental Animals: Adult albino rats of either sex were procured from central animal house, J.N Medical College, AMU, Aligarh (Registration no. 401/CPCSEA). They were housed in polypropylene cages and maintained according to CPCSEA guidelines, i.e., at room temperature of 27º ± 2ºC under 12 h light and dark cycle. Rats were acclimatized for one week before experimentation. Ethical clearance for the study was obtained from Institutional Animal Ethics Committee of Jawaharlal Nehru medical college, A.M.U, Aligarh.

Group III (BBE) and Group IV (BPE) were administered Bauhinia purpurea unripe pods and bark extract in a dose of 400 mg/kg per orum respectively daily along with the same dose of gentamicin as in group II. The extract was given one hour before administration of gentamicin in the treatment group. All the groups were given treatment over 8 consecutive days. Following the last dose of treatment, animals were housed individually in separate metabolic cages to collect 24-hour urine. Twenty four hours after the last dosing, i.e., on 9th-day rats were anesthetized with ketamine and sacrificed. Blood samples were collected by cardiac puncture method. Kidneys were dissected out and weighed. One kidney was preserved in 10% formalin for histological examination, and the other kidney was homogenized for biochemical analysis for oxidative stress and antioxidant activity.

Biochemical Analysis and Tissue Studies: Serum urea and creatinine levels, as well as urine glucose levels, were determined using diagnostic kits from span diagnostics, Hyderabad. For estimation of oxidative stress, the kidney tissue was cut into small pieces and homogenized in 10% phosphate buffer, by using homogenizer. Tissue lipid peroxidation level (MDA) was determined by the method described by Buege and Aust 20. According to this method, MDA condenses with two equivalents of thiobarbituric acid to give a fluorescent red derivative which was assayed spectrophotometrically at 532nm. The results were expressed as nmol/g wet tissue weight. Catalase, an antioxidant enzyme level was estimated by the method described by Sinha 21 and was expressed as Units of H2O2 consumed/min/g wet tissue. Reduced glutathione level estimation was performed according to the protocol of Ellman 22.

Histological Examinations: Formalin preserved kidney tissue was embedded in paraffin, and 5-6 μm sections were cut using a rotary microtome and stained with hematoxylin and eosin (H&E) 23. All sections were examined with a light microscope for tubular degeneration, tubular necrosis, mononuclear cell infiltration, and hyaline casts.

Statistical Analysis: Results were expressed as the mean ± SD. A significant statistical difference was determined by one-way analysis of variance (ANOVA) followed by post-hoc dunnets test for multiple comparisons. Probability values (?) less than 0.05 were considered to be statistically significant.

RESULTS AND DISCUSSION: The nephrotoxicity of aminoglycoside antibiotics, especially that of the most commonly used antibiotic, gentamicin (GM) is well documented 24-25. Several studies have reported that oxygen-free radicals are considered to be important mediators of GM-induced acute renal failure 26-27. Therefore agents with antioxidant property can be used for amelioration of GM-induced nephrotoxicity. Results summarized in Table 1 show the effect of GM alone and in simultaneous treatment with Bauhinia purpurea bark (BBE400) and unripe pods (BPE400) extract in the dose of 400 mg/kg on the physical parameters.

TABLE 1: EFFECT OF ETHANOLIC EXTRACTS OF UNRIPE PODS AND BARK OF B. PURPUREA ON PHYSICAL PARAMETERS IN GENTAMICIN INDUCED NEPHROTOXICITY

TABLE 2: EFFECT OF ETHANOLIC EXTRACTS OF UNRIPE PODS AND BARK OF B. PURPUREA ON BIOCHEMICAL PARAMETERS OF GENTAMICIN INDUCED NEPHROTOXICITY

Significant increase in lipid peroxidation indicated by elevated MDA level (p<0.001) and reduction in GSH and CAT activity (p<0.01) after the treatment of gentamicin in negative control group indicated the production of free radicals and involvement of oxidative stress to nephrotoxicity caused by gentamicin treatment Table 3. The same results have been reported earlier by Walker et al., 1999 26. Administration of Ethanolic extract of B. purpurea bark and unripe pods produced protection against lipid peroxidation (p<0.01) and increased the activity of antioxidant reduced GSH and Catalase (p<0.01) against gentamicin-induced oxidative stress Table 3. B. purpurea contains a major class of secondary metabolites like glycosides, flavonoids, saponins, triterpenoids, phenolic compounds, oxepins, fatty acids, and phytosterols 12- 29- 30. Therefore the nephroprotection observed with the treatment of BBE and BPE 400 mg/kg might be due to the presence of these polyphenolic compounds.

These findings correlated with the histological examination Table 4.

Light microscopic examination of stained kidney tissue slices from the vehicle control group (Group I) showed normal histological features with no structural alterations in glomeruli and tubules Fig. 3A, but the GM-treated group (Group II) revealed more extensive and marked tubular necrosis and numerous hyaline casts Fig. 3B. There were mononuclear infiltrations which are considered to be the response of the body tissue facing any injurious agent. These alterations could be due to the accumulation of free radicals resulting from an increased lipid peroxidation in the renal tissues of the GM-treated group. Renal lesions were also characterized by vascular congestion as well as tubular obstruction. Similar changes were also reported by Yaman et al., 31 and Abdel-Raheem et al. 32 who demonstrated structural changes in renal tissue of GM-treated animals and its reversal by various agents. Glomerular and tubular epithelial changes were considerably mild in the group treated with both GM along with B. purpurea unripe pods and bark extract Fig. 3C and D, thus showing the preventive effect of BPE400 and BBE400 against GM-induced tissue damage. 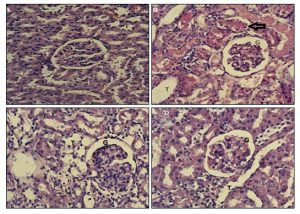