INTRODUCTION: Oral delivery of drugs is by far the most preferable route of drug delivery due to ease of administration, patient compliance and flexibility in formulation etc. From immediate release to site-specific delivery, oral dosage forms have really progressed. However, it is a well accepted fact that it is difficult to predict the real in vivo time of release with solid, oral controlled release dosage forms.

Thus, drug absorption in gastrointestinal (GI) tract may be very short and highly variable in certain circumstances 1. Several difficulties are faced in designing controlled release systems for better absorption and enhanced bioavailability. Various attempts have been made to prolong the retention time of the dosage form in the stomach.

One such method is the preparation of a device that remains buoyant in the stomach contents due to its lower density than that of the gastric fluids 2. Single-unit formulations are associated with problems such as sticking together or being obstructed in the gastrointestinal tract, which may have a potential danger of producing irritation.

On the other hand, a floating system made of multiple unit forms has relative merits compared to a single unit preparation. Indeed, the gastric emptying of a multiparticulate floating system would occur in consistent manner with small individual variations. On each subsequent gastric emptying, sink particles will spread out over a large area of absorption sites, increasing the opportunity for drug release profile and absorption in a more or less predictable way. Moreover, since each dose consists of many subunits, the risk of dose dumping is reduced 3.

For the present investigation, the drug used in the treatment of peptic ulcer i.e. famotidine, a histamine H2 -receptor antagonist was selected for its formulation as floating drug delivery system. The recommended oral dosage of famotidine is 20 mg twice daily or 40 mg once daily. Conventional dosage of 20 mg can inhibit gastric acid secretions up to 5 hours but not up to 10-12 hours and leads to fluctuation in plasma level and requires frequent dosing. Famotidine is absorbed only in the stomach and in the initial part of small intestine and has 40 - 50 % absolute bioavailability. Therefore sustained release formulation of famotidine is desirable. The short biological half-life (2.5 to 3.5 hr.) also favors development of sustained release formulation. The traditional oral sustained release formulation releases most of the drug in the intestine and colon, thus the drug has a narrow absorption window 4.

The objective of the present work was to develop and characterize floating microspheres of famotidine, which after oral administration could prolong the gastric residence time and increase the drug bioavailability.

2.2. Preparation of fam absorbed CS: CS (1.0 g) was dispersed in 10 ml ethanolic solution of famotidine to prepare a slurry. The slurry was ultrasonicated for 10 min in an ice bath at 40% voltage frequency using a probe sonicator (Soniweld, Imeco Ultrasonics, India) to entrap the drug solution and reducing agent inside the pores of porous carrier. The excess ethanolic solution was removed by filtration and then drying in vacuum, which resulted in famotidine absorbed CS powders.

2.3. Preparation of floating microspheres: Microspheres were prepared using a modified emulsion solvent diffusion technique 5 Briefly, the drug absorbed CS was added into the polymer solution of ethyle cellulose and HPMC in ethanol and dichloromethane (2:1) and sonicated using probe sonicator. The resulting suspension was poured into 200 ml aqueous solution of PVA (0.75% w/v) at 40 °C. The emulsion or suspension was stirred at 500 rpm for 3 h employing a propeller type agitator. The microspheres were separated by filtration, washed with water and dried at room temperature in a desiccator for 24 h.

2.7 Incorporation efficiency (IE):  To determine incorporation efficiency floating microspheres were dissolved in a minimal amount of dichloromethane and the drug was extracted into a suitable aqueous media (0.1 N Hcl) by evaporating dichloromethane. The solution was filtered through 0.45 m membrane, diluted suitably and analyzed for drug content spectrophotometrically at 292 nm using 0.1 N HCl as blank.

2.8 In vitro drug release studies: The drug release was studied using a USP 24 dissolution apparatus type I (Veego Scientific, Mumbai) at 100 rpm in 0.1N Hcl as dissolution medium (900 mL) maintained at 37±1°C. A sample (10 mL) of the solution was withdrawn from the dissolution apparatus hourly and the samples were replaced with fresh dissolution medium. The samples were filtered through a 0.45 μ membrane filter and diluted to a suitable concentration with 0.1 N Hcl. Absorbance of these solutions was measured at 292 nm using a SYSTRONICS 2202 UV/visible spectrophotometer. Cumulative percentage drug release was calculated using an equation obtained from a standard curve.

2.9 In vivo Radiographical Study: 8 In order to assess the gastro retentive efficacy of those floating formulations, the % buoyancy was determined by using barium sulphate X- ray contrast medium. 10% w/v polymer solution (composition ratio of 1:2 HPMC and EC) floating microsphere containing 15% barium sulphate as a contrast agent were prepared for radio graphical study. The study was carried with three healthy male rabbits free of detectable gastrointestinal diseases or disorders. The rabbits were fasted overnight. The rabbits were administered suspension of formulations (FM4) with 25 ml of water and X- ray photograph was taken immediately after administration.

2.10 Anti Secretory And Ulcer Protective Effect of Formulation In Ethanol Induced Gastric Ulcers 9, 10 The studies were performed on two groups of animal (each group having six rats). Animals of group I were served as control and received 2 ml vehicle [1% CMC] whereas, animals of group II were served as test and administered with 2 ml suspension of formulation (equivalent to 3 mg/kg famotidine ) orally. A three dose treatment was given to all the animal at a interval of 12 hrs and last dose was given one hour The percentage protection was calculated by following formula.

RESULTS AND DISCUSSION: The floating microspheres were prepared by emulsion solvent diffusion technique. A solution or suspension of polymer (HPMC and EC) and famotidine absorbed porous calcium silicate (CS) in ethanol and dichloromethane was poured into an agitated aqueous solution of polyvinyl alcohol (PVA). The subsequent evaporation of the entrapped dichloromethane led to the formation of internal cavities within the micro particles. The incorporation of drug absorbed CS into the formulation might have produced porous structure within the microspheres. (Table 1) (Fig.1 and 2) The flow properties of microspheres were characterized in terms of angle of repose, bulk density, tapped density and carr index. All formulation showed excellent flowability as expressed in term of angle of repose (< 400). 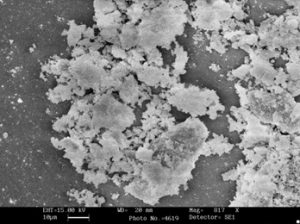 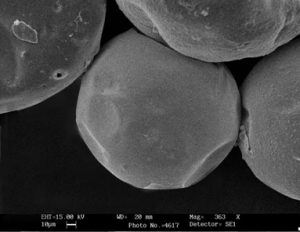 The percentage yields of floating microspheres of formulations (FM1 to FM9) were found to be in the range of 79.51 ± 3.71 to 93.48 ± 0.94 %. Very good microspheres were produced when the polymeric phase was mixture of EC: HPMC at ratio: 2:1 FM6 has the highest yield (92.11 ± 1.68 %). The size of microspheres formed may be a function of many factors such as stirring speed, viscosity of the dispersed phase and dispersion medium, temperature, conc. of polymer, amount and size of porous carrier. Mean particle size of the microspheres prepared with ethyl cellulose formulation FM1 was found to be 95.73 µm while it was significantly increased to 103.02 µm as the concentration of total amount of polymer was increased, % yield and drug entrapment (drug content) were also increased.

Percentage drug content of floating microspheres formulations (FM1 to FM9) were found in the range of 77.25 ± 0.36 to 86.14 ± 2.04 %. The high entrapment efficiency of drug may be attributed to their poor aqueous solubility. All formulation of drug content revealed above 77%. Formulation FM6 showed good % drug entrapment efficiency (86.14 ± 2.04 %). (Table 2) In vitro Buoyancy percentage of the microspheres famotidine was in the range of 88.36 ± 4.85 to 98.75 ± 3.62 % at the end of 12 h (above 88 %). The nature of the polymer influenced the floating behavior of the microspheres. Good in vitro floating behavior was observed for all the microsphere formulation. This may be attributed to the low density CS within the system. (Fig. 3) 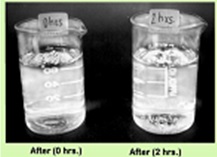 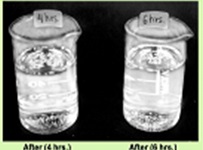 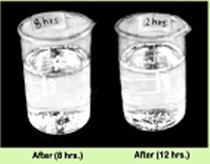 The releases of famotidine from calcium silicate based microspheres were studies in SGF (pH 1.2) and PBS (pH 7.4). Results revealed that the release rate depends upon the polymer concentration, amount of adsorbed polymer as well as the composition ratio of the HPMC and EC in the polymer solution. The cumulative release of famotidine significantly decreased with increasing ethyl cellulose concentration due to enteric property of ethyl cellulose polymer. There was no burst effect from any of these formulations. The increased density of the polymer matrix at higher concentrations results in an increased diffusion path length. This may decrease the overall drug release from the polymer matrix. At pH 1.2, the best formulation FM4 showed maximum drug release (99.26 ± 1.14 %) at the end of 12 hr. While at pH 7.4, Formulation FM4 showed 98.13 ± 1.30 % at the end of 12 hr. respectively. The results of formulations (FM1 to FM9) are shown in Table 3 and 4 and graphically represented in Fig. 4-9.

These results showed that formulation FM4 released famotidine. (Fig 10) In the study of anti secretory and ulcer protective effect of FM4 formulations in absolute ethanol induced gastric ulcer model. In animals of group I acute ulcers were produced by the use of absolute alcohol (1ml) body weight.  The animals of group II, which were administered suspension of formulations FM4 (2ml) before 30 min administration of absolute alcohol were found to protect gastric mucosa from ulcer. The suspensions of the formulation reduced the volume of gastric juice secreted by 37.5 %. 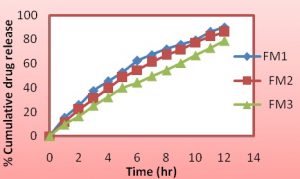 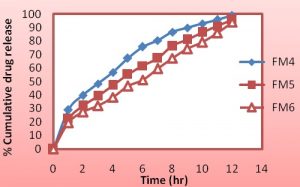 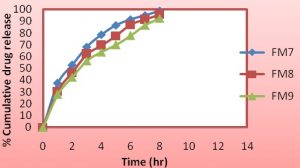 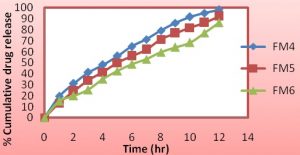 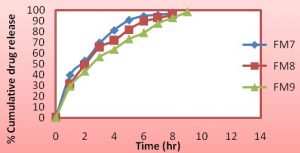 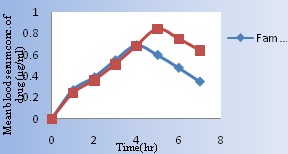 FIG. 10: PLOT OF MEAN SERUM LEVEL CONCENTRATION OF FAMOTIDINE VERSUS TIME AFTER ORAL ADMINISTRATION OF ITS FLOATING MICROSPHERE (FM4) 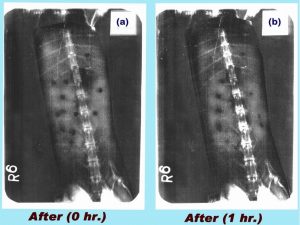 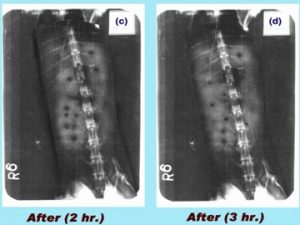 FIG. 11: X-RAY IMAGES OF RABBIT’S ABDOMEN AFTER ORAL ADMINISTRATION OF FM4 AND AM4 CONTAINING 15 % BARIUM SULPHATE AS A CONTRAST AGENT 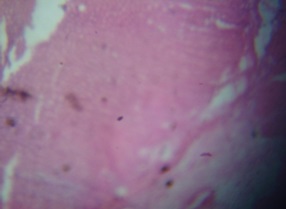 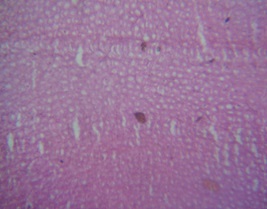 FIG. 13: HISTOPATHOLOGY OF ULCERATED STOMACH OBTAINED FROM RATS TREATED WITH FORMULATION AND ETHANOL AFTER 1HR OF ADMINISTRATION (N=6). 45X, 10X 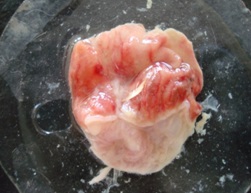 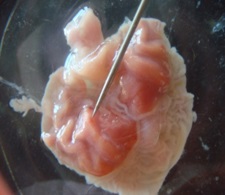 FIG. 14: STOMACH OF CONTROL (A) AND (B) TREATED RATS AS SHOWN IN VISUAL INSPECTION

CONCLUSION: Floating microspheres of famotidine was prepared by emulsion solvent evaporation method. Calcium silicate has been used as carrier. On the basis of results obtained in these investigations, the following conclusions may be drawn: