FORMULATION AND CHARACTERIZATION OF GASTRORETENTIVE FLOATING MICROBALLOONS OF METFORMIN

FORMULATION AND CHARACTERIZATION OF GASTRORETENTIVE FLOATING MICROBALLOONS OF METFORMIN

Gastroretentive dosage forms have potential for use as controlled drug delivery systems. Multiple unit systems avoid the “all-or-none” gastric emptying nature of single unit system. A controlled release system designed to increase its residence time in the stomach without contact with the mucosa was achieved through the preparation of floating microballoons by the emulsion solvent diffusion technique using acrylic polymers (i.e. Eudragit RS-100 and Eudragit S-100) with drug (metformin) in a mixture of ethanol, dichloromethane and propanol. The effect of various formulation and variables on the internal and external particle morphology, micromeritics properties, in vitro floating behavior, physical state of the incorporated drug, drug loading and invitro drug release was studied. The microparticles were found to be regular in shape and highly porous. The release rate was determined in simulated gastro-intestinal fluids at 37oC. The formulation demonstrated favorable invitro floating and release characteristics. The drug encapsulation efficiency was high. Incorporation of Eudragit RS-100 and Eudragit S-100 in the microballoons proved to be an effective method to achieve the desired release behavior and buoyancy. The designed system, combining excellent buoyant ability and suitable drug release pattern, could possibly be advantageous in terms of bioavailability of metformin

INTRODUCTION: Increased gastric retention of drug delivery system in certain situations may be desirable to improve the bioavailability and the therapeutic efficacy of the drugs. Drugs that are absorbed easily in the proximal part of the gastro intestinal (GI) tract, and having short half-life are estimated quickly from the blood circulation. To overcome these problems, orally administered drugs are generally film coated or microencapsulated to prolong the drug release period and drug action. However most of these forms have several physiological problems such as GI transit time, short residence time and incomplete drug release from devices, which leads to low bioavailability. To overcome this problem, several attempts have been made recently to extend GI transit time of the devices. One such method is floating drug delivery systems.

These devices have specific density that is lower than that of the gastric fluids. Most of the floating system is the high variability of the GI transit time. Therefore, a multiple-unit floating system has been worked upon.  In the present study, microballoons of metformin were developed using Drug: Eudragit RS-100: Eudragit S-100 in various ratios by emulsion solvent diffusion method. These microballoons were tested for physicochemical properties along with in-vitro floating and the drug release behavior 1, 2.

Preparation of floating hollow microballoons: Microballoons with an internal hollow structure were prepared by solvent diffusion-evaporation method. Equal quantities of two polymers i.e. Eudragit S-100 and Eudragit RS-100 were dissolved in mixture of ethanol, isopropanol and dichloromethane. Then drug was homogeneously dispersed in this polymer solution3, 4. This polymer solution was slowly introduced into poly vinyl alcohol aqueous solution with stirring using a mechanical stirrer equipped with a three blade propeller. The solution was stirred for one hour and microballoons were collected by filtration and washed three times with distilled water, dried and kept in desiccators.5, 6 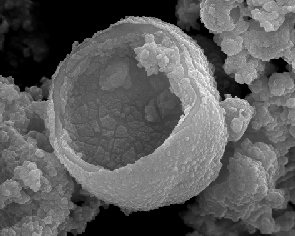 Total 15 formulations were designed on the basis of these variables (Table I).

Table 1: The composition, formulation code and variable used in the preparation of floating microballoons 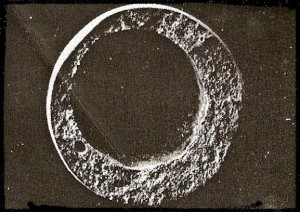 Size distribution and morphology: The floating microballoons were examined by optical and scanning electron microscopy (SEM). The size of the microballoons was measured using a photo microscope. (Fig 1 & Fig 2)

% yield = weight of microballoons collected / wt. of all non-volatile components used for the preparation x 100

Percent entrapped drug: The prepared microballoons were digested in minimum quantity of ethanol (95%), and then diluted with acetate buffer up to 10 ml. The digested homogenate was centrifuged at 3000 rpm for three minutes and the supernatant after suitable dilution was assayed for metformin spectrophotometrically. The percentage drug entrapment is calculated from the equation given below.

In vitro floating test: The floating test of the microballoons was carried out using the dissolution test apparatus method II specified in the USP XX. The unloaded microballoons were spread over the surface of the simulated gastric fluid pH 1.2, which was agitated by a paddle rotated at 100 rpm 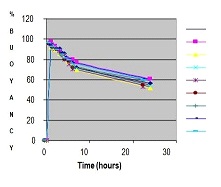 Fig 3: % buoyancy of different unloaded formulations in SGF at 37 ± 1oC

In- vitro drug release: The optimized formulations of metformin microballoons were selected for the invitro drug release studies. The drug release studies of microballoons were carried out in dissolution test apparatus II USP XX by the paddle method. Microballoons of metformin were gently spread over the surface of 900 ml of dissolution medium (SGF pH 1.2). The paddle was rotated at 100 rpm and the temperature of dissolution medium was thermostatically controlled at 37 ± 0.5oC. The samples were withdrawn at suitable intervals of time from the dissolution vessel and were assayed after appropriate dilution spectrophotometrically at 233 nm in acidic medium for metformin using Shimadzu 1700 (UV-Visible spectrophotometer) 8 (Table 4 & Fig 4). 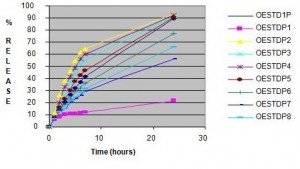 SUMMARY AND CONCLUSION: The present formulation study of metformin was performed in an attempt to prepare floating drug delivery system consisting of floating multiple unit system. Incorporation of Eudragit S-100 and Eudragit RS-100 in the microballoons proved to be an effective method to achieve the desired release behavior and buoyancy. The performance of these formulations was evaluated and the effect of various formulation various formulation variables was studied. The designed system, combining excellent buoyant ability and suitable drug release pattern, could possibly be advantageous in terms of increased bioavailability of metformin. Major advantages of the system include:

The developed formulation overcomes and alleviates the drawbacks and limitations of sustained release preparations in the drug-delivery art through the discovery of novel Eudragit RS-100 and Eudragit S-100 based floating microballoons suitable for controlled release of drug for oral administration.