University College of Pharmacy 2, University of the Punjab, Lahore, Pakistan.

ABSTRACT: Purpose: To formulate and characterize the bi-layer tablet of doxycycline immediate release and flurbiprofen sustained release. Method: Bi-layer tablets were formulated by wet granulation method. Ethyl cellulose and HPMC K 100 were used as polymer for sustained release layer. Five immediate release formulations were developed with varying excipients. Bi-layer tablets were evaluated by pre formulation and post formulation parameters as stated by USP. Dissolution was conducted in 0.1 N HCl and 6.8 phosphate buffer and resulting data were analyzed statistically by one way ANOVA and drug release kinetics was studied using various pharmacokinetic models. Results: Data from pre formulation confirmed the purity of doxycycline hyclate and flurbiprofen. FTIR confirmed the absence of incompatibility between drugs and excipients. Dissolution profile in 0.1 N HCl and 6.8 phosphate buffer was according to USP guidelines. Regression coefficient (R2) values from kinetic analysis showed that release followed Higuchi model indicating release mechanism followed diffusion transport. Results of one way ANOVA confirmed that there is no statistically significant difference (p > 0.05) between drug dissolution of all formulations.  Conclusion: Bi-layer tablet was successfully formulated and it is a suitable approach to increase patient compliance and decrease cost of therapy.

INTRODUCTION: Bilayer tablets are tablets having two different drugs in single formulation, which may be pharmaceutically incompatible but have synergistic effects. So that patient compliance can be increased by decreasing the number of doses and reducing the cost of the therapy.

Bilayer tablets have been widely used for modified release action, in which we can manipulate the total surface area by sandwiching with one or two actives or by some excipients in order to attain erodible or swellable barriers of modified release. Most wide application and reason to develop bilayer tablet is the instance when we want to give pharmaceutical incompatible APIs in combination1. Flurbiprofen (2-(2-flurobiphenyl-4yl) is propionic acid derivative, non-steroidal anti inflammatory drug having good analgesic, anti-inflammatory and antipyretic activities. Clinically it is used for osteo-arthritis, rheumatoid arthritis, periodontic pain, degenerative joint disease, acute musculoskeletal disorders, lower back pain and other conditions alike. They impart their action by inhibiting the synthesis of prostaglandins involved in pain and inflammation 2.

Doxycycline hyclate ((4S, 4aR, 5S, 5aR, 6R, 12aS)-4-(dimethylamino) - 3, 5, 10, 11, 12a - penta hydroxyl-6-methyl-1,12-dioxo - 4a, 5, 5a, 6 - tetra hydro-4H - tetracene - 2 carboxamide; etanol; dihydrochloride) is a broad spectrum antibiotic belonging to the class of tetracyclines. It is clinically used in bacterial infections, especially in urinary tract infections, respiratory tract infections, gastrointestinal infections, acne, particularly in periodontics (gum disease) and in other bacterial infections. Doxycycline is also used in rheumatoid arthritis in combination with some other drugs. Doxycycline hyclate is a synthetic antibiotic derived from oxytetracycline, inhibits the bacterial protein synthesis by binding to 30s ribosomal unit 3. Both of these drugs have synergistic effect, and especially in destructive diseases like rheumatoid arthritis, chronic periodontics, and refractory periodontal disease.

It is assumed that sub antimicrobial dose of doxycycline and flurbiprofen reduces the mammalian collagenase and other metalloproteinase. It is also assumed that combination of these two drugs helps to uptake doxycycline based matrix metalloprotein inhibitors in the inflammatory lesion so efficacy of both of the drugs is enhanced 3, 4.

The present work was aimed to study the development and in-vitro evaluation of Bi-layer tablet of sustained release flurbiprofen and immediate release doxycycline hyclate by wet granulation method using different excipients and varying excipients ratio. Which will increases the patient compliance and decrease the cost of therapy especially in destructive diseases like rheumatoid arthritis, chronic periodontics, and refractory periodontal disease.

Formulations of Bi-Layer Tablets: Five different formulations with varying excipients were prepared as stated in Table 1 and Table 2. For this purpose weighed amount of drugs and excipients were sieved through mesh#20 separately. Active pharmaceutical ingredients were mixed with lactose separately. Then PVP K30 dissolved in IPA was added in mixtures. Wet masses were sieved through mesh # 20 and then dried at 60 °C for 2-3 hours. Then dried granules were sieved again and rest of excipients were added except magnesium stearate and talcum. Mixing was done until uniform mixing was achieved. At the end lubrication was added and final mixing was done.  Most critical step was compression in bilayer tablets. For research purpose bilayer tablets can be compressed on a single punch machine.

In this project we preferred single punch machine in which weighed amount of granules of first layer tablets that was of flurbiprofen was initially filled in dye and was pre compressed, then granules of second layer which were of immediate layer of doxycycline were added in dye and final compression was done. Bilayer tablets were prepared successfully. To relate it with industrial scale and check flow properties of our granules, these were also compressed on a bilayer tablet machine at Caraway Pharmaceuticals Pvt. Ltd., and bilayer tablets were also manufactured successfully.

Fourier transformed infrared (FTIR) spectroscopy: The compatibility of flurbiprofen, doxycycline hyclate and excipients were studied through FTIR analysis. The FTIR study was performed using BRUKUR- FT-IR spectrophotometer. For analysis, very small quantity of sample was placed on the lens of equipment directly and pressure was applied upto the specified mark. Spectrum was recorded between 4000 to 400 cm-

UV Spectroscopy: For assay UV spectroscopy was used. Solutions of drugs were prepared in 0.1 N NaOH and absorption at respective lambda max of each drug was calculated. Method was calibrated and validated.

In-vitro Release Studies: USP apparatus II was used for In-vitro release studies of dissolution test. First apparatus was filled with 900 ml of 0.1 N HCl, single tablet was put in each basket of the dissolution apparatus. Paddle of the apparatus was rotated at 50 RPM for the first 2 hour. After that 0.1N HCl was replaced by phosphate buffer 6.8 pH. Paddle was continuously rotated at 50 RPM for for 12 hours. Samples for immediate release layer were collected at the interval of 5, 10, 15, 20, 30, 45, 60 and 90 min and for sustained release layer at the interval of 2, 4, 6, 8, 10 and 12 hours. Samples were analyzed at 247 nm for flurbiprofen and 375 nm for doxycycline hyclate by using UV spectrophotometer 5, 6.

Release Kinetics: Different methods including model dependent and model independent approaches were used to analyze dissolution data and to study release pattern of drug from dosage form as well as to check variation among the data of five formulations formulated as well as to compare with the dissolution of brand leader.

Three different approaches are common to analyze dissolution data and check the parameters mentioned above 7.

Statistical Approach: First approach is statistical in which we used analysis of variance ANOVA technique which was applied by using Microsoft excel 2010. One way ANOVA was applied and results were interpreted. The level of significance was set at p <0.05 8, 9.

Determination of Difference (f1) and Similarity (f2) factor: Difference factor (f1) and similarity factor (f2) was applied by using equation of difference and similarity factor. Doxycycline dissolution results were compared with brand leader vibramycin results in three different dissolution mediums. Sustained released tablet of flurbiprofen is not available in market so all formulations were compared with the formulation having most suitable results i.e. F3. Best formulations were pointed out which were closer to the standard. Difference factor of 0-15 ensures minor difference between two products. Similarity factor of 50-100 ensure sameness of two products10.

In this project, extensive post formulation studies were done and we tried to cover each and every aspect of in-vitro evaluation of tablets. Physical test and assay results are mentioned in Table 4.

Infrared spectra: FTIR spectra of flurbiprofen and doxycycline hyclate showed the same absorption pattern  as the combination of drugs and excipients of formulations. 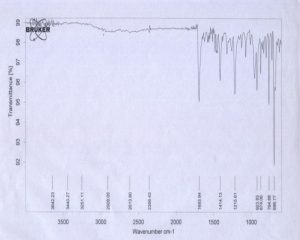 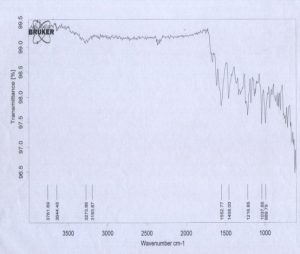 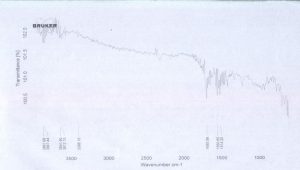 A: Doxycycline Hyclate, B: Flurbiprofen

TABLE 11: DIFFERENCE AND SIMILARITY FACTOR FOR DOXYCYCLINE IN 0.1N HCl

TABLE 12: DIFFERENCE AND SIMILARITY FACTOR FOR FLURBIPROFEN IN 0.1N HCl

TABLE 13: DIFFERENCE AND SIMILARITY FACTOR FOR DOXYCYCLINE IN 6.8 PHOSPHATE BUFFER

TABLE 14: DIFFERENCE AND SIMILARITY FACTOR FOR FLURBIPROFEN IN 6.8 PHOSPHATE BUFFER

Statistical evaluation: One way ANOVA was used to determine statistically significant difference between dissolution profile of different formulations of doxycycline and flurbiprofen in 0.1 N HCl and 6.8 pH phosphate buffer. There was no significant difference (P > 0.05) between drug dissolution of all formulations studied in both mediums. The data of one way ANOVA is given in the Table 15.

DISCUSSION: Bi-layer tablet of sustained release flurbiprofen and immediate release doxycycline hyclate were successfully formulated. All pre formulation and post formulation parameters were within the acceptable limits as stated by USP. FTIR spectra of drugs and formulation showed almost similar pattern of absorption predicts that there was compatibility between drugs and excipients.

Sustained release layer showed satisfactory results as it released drug in 6.8 phosphate buffer media and released less amount of drug in acidic media, while immediate layer released almost all drug in acidic medium which was desirable. Release kinetics of all formulations showed that Higuchi model best explains the release of drugs from formulation and drug release was through diffusion mechanism as explained by Higuchi model.

Difference and similarity factor test was done and results indicate that except F1 all formulations are more similar and less different to standard. F2 and F5 also deviated to some extent in 6.8 phosphate buffer.

CONCLUSION: Bilayer tablets were successfully developed and manufactured and all parameters were closely monitored and evaluated. All five formulations were within the official limits as stated by international pharmacopoeias, but the best formulation which gives better results as compared

to other formulations was F3 which is also nearer to standards. Kinetic release studies of formulation in all three media were better explained by Higuchi model and it is indicated that release of drug from formulation is through diffusion mechanism. Stability studies indicate that formulation remained stable and no significant change was observed before and after stability studies.