In the present study, we have chosen a plant named Allium cepa Linn(Liliaceae) to evaluate its hepatoprotective activity in experimental animals. Different pharmacological activities are reported with different parts of this plant. Some of its medicinal properties reported are as stimulant, diuretic, anti-tubercular, anthelmintic, and used for various diseases like  diabetes, skin diseases, rheumatism, asthma, nausea and constipation. From the literature we found that A. cepa has also been traditionally indicated for treatment of hepatic disorders. This prompt us to select bulb extracts of this plant for the study of hepatoprotective activity in paracetamol induced hepatotoxicity in experimental animals. Phytochemical screening of A. cepa revealed the presence of Saponins, carbohydrate, steroids, Flavonoids. The present study was made to evaluate the hepatoprotective effect of alcoholic and aqueous extracts of Allium cepa in CCl4 and paracetamol induced hepatic injury in experimental animals. Hepatoprotective activity of A. cepa was studied by estimating the serum levels of serum glutamic oxaloacetic transaminase (SGOT), serum glutamic pyruvic transaminase (SGPT), alkaline phosphatase (ALP), direct and total bilirubin. The treatment with AEAC and AQEAC showed significant reduction of CCl4   and paracetamol induced elevated serum enzyme and pigment levels. Histopathology of liver shows hepatoprotective effect of these extracts.

INTRODUCTION: The largest organ in human body and the major site for intense metabolism and excretion is liver. So it has a surprising role in the maintenance, performance and regulating homeostasis of the body. The major functions of the liver are carbohydrate, protein and fat metabolism, detoxification, secretion of bile and storage of vitamin. Thus, to maintain a healthy liver is a crucial factor for overall health and well being 1. Most of the hepatotoxic chemicals damage liver cells mainly by inducing lipid peroxidation and other oxidative damages. In absence of reliable liver-protective drugs in modem medicine, there are a number of medicinal preparations in Ayurvedic system recommended for the treatment of liver ailments 2. Paracetamol (PCM) also known as Acetaminophen, taken in overdose can cause severe hepatotoxicity and nephrotoxicity. PCM is activated and converted by cytochrome P450 enzymes to toxic metabolite NAPQI (N-acetyl-p-benzoquinoneimine) which causes oxidative stress and glutathione (GSH) depletion. Even though with tremendous advances in modern medicine, we can hardly find reliable drugs that protect the liver from damage and/or help in regeneration of hepatic cell.

Many active plant extracts are frequently utilized to treat a wide variety of clinical diseases including liver disease 3.

Hepatotoxicity is one of the very common ailments resulting serious debilities ranging from severe metabolic disorders to even mortality. Hepatotoxicity in most cases is due to free radicals. Free radicals generated by hepatotoxins like CCl4 may overpower the protective mechanism of the liver and cause hepatic damage 4. Large number of xenobiotics reported to be potentially hepatotoxic. Free radicals generated from the xenobiotic metabolism can induce liver lesions and react with the basic cellular constituents like proteins, lipids, RNA and DNA 5. Ethnopharmacological surveys conducted among herbal practitioners of Western Ghats, Tamilnadu, India had revealed laticiferous plant species used as a source of herbal therapies 6.

Allium is the largest and important representative genus of the Alliacae family comprising 450 species. Onion (Allium cepa) is a bulbous plant widely cultivated with leading production in China, India and United States. It is rich in proteins, carbohydrates, sodium, potassium and phosphorus. Traditionally onion has been used to treat intestinal infections. It has been reported to be an antibacterial, antiviral, antiparasitic, antifungal and has antihypertensive, hypoglycemic, antithrombotic, antihyperlipidemic, anti inflammatory and antioxidant activity 7.

Drugs and Chemicals: Silymarin was obtained from Micro Labs, Bangalore. The chemical kits for all biochemical parameters were obtained from Transasia Biomedicals Ltd., Solan H.P, and India. The solvents and other chemicals were used were of analytical grade.

Plant Material and Extracts: Allium cepa was obtained from fields of Raichur, Karnataka, India; the bulbs were cut into small pieces and shade dried at room temperature. The plant was authenticated by a Botanist, L.V.D College, Raichur. Dried bulbs were powdered and then subjected for alcoholic extraction process with 95% v/v ethanol for 18 hour, using Soxhlet apparatus.

The aqueous extract was prepared by taking 100 g of powder in a round bottom flask (2000 ml) and macerated with 500 ml of distilled water with 10 ml of chloroform (preservative) for 7 days with shaking for every hour in a closed vessel. Then the marc was removed by filtering the extract and then it was concentrated on a water bath maintained at 50oC. The percentage yield of AEAC and AQEAC were 11.14% and 18.12%, respectively.

Phytochemical Screening: A preliminary phyto-chemical screening of AEAC and AQEAC was carried out as described by Khandelwal 8.

Animals: Wistar albino rats (150-200g) of either sex were procured from Venkateshwara Enterprises, Bangalore and were acclimatized for 10 days under standard housing conditions maintained at a room temperature of 24±1oC; relative humidity 45-55% with 12:12 hr light and dark cycle. The animals were maintained on standard pellet diet and tap water ad libitum. The institutional animal ethics committee of V.L. College of Pharmacy, Raichur, India, approved the experimental protocol in accordance with the guidelines provided by committee for the purpose of control and supervision of experiments on Animals (CPCSEA) with registration number- 557/02/C/CPCSEA.

LD50 Determination: The acute toxicity of AEAC and AQEAC were determined by using non-pregnant female albino mice (18-22g) maintained under standard husbandry conditions. The animals were fasted 3 h prior to the experiment and “up and down” (OECD guideline No.425) method of CPCSEA was adopted for toxicity studies. Animals were administered with single doses of extracts and observed for their mortality during 48 h study period (short term toxicity). Based on the short-term profile of drug the doses for the next animals were determined as per OECD guideline No. 425. All the animals were observed for long term toxicity (14days) and then 1/5th, 1/10th and 1/20th of the maximum (2000 mg/kg) dose was selected for the present study 9.

During this period of treatment the rats were maintained under normal diet and water. All the animals were sacrificed 24 hrs, after the last injection of CCl4 on 11th day. Blood was collected from retro orbital puncture under mild ether anesthesia. Blood was allowed to clot at room temperature for 30 min, subjected to centrifugation (3000 rpm for 15 min.) and biochemical parameters had estimated. Liver was dissected out and subjected for morphological study such as wet liver weight and wet liver volume of each animal. The volume of wet liver was measured by displacement method and further the liver was placed in 10% formalin solution for histopathological study 11.

Table 1 reports that the liver vol, liver wt and the levels of SGOT, SGPT, ALP, BILT are increased in the CCl4treated group which is decreased to normal in the standard (silymarin) treated group and a dose dependent decrease to normal is seen with AEAC and AQEAC with a maximum activity with high doses of extracts followed by medium and low doses and among the high doses AEAC have shown the maximum activity. 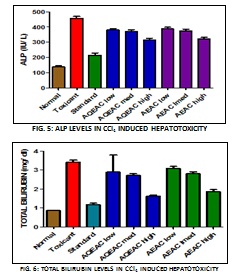 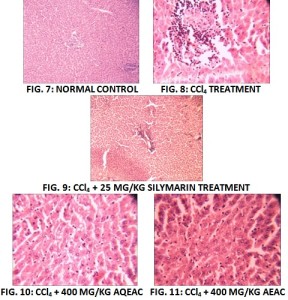 Fig. 1, 2, 3, 4, 5 and 6 reports that the liver vol, liver wt and the levels of SGOT, SGPT, ALP, BILT are increased in the CCl4treated group which is decreased to normal in the standard (silymarin) treated group and a dose dependent decrease to normal is seen with AEAC and AQEAC with a maximum activity with high doses of extracts followed by medium and low doses and among the high doses AEAC have shown the maximum activity.

Table 2 reports that the liver vol, liver wt and the levels of SGOT, SGPT, ALP, BILT are increased in the PCMtreated group which is decreased to normal in the standard (silymarin) treated group and a dose dependent decrease to normal is seen with AEAC and AQEAC with a maximum activity with high doses of extracts followed by medium and low doses and among the high doses AEAC have shown the maximum activity. 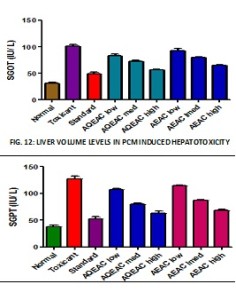 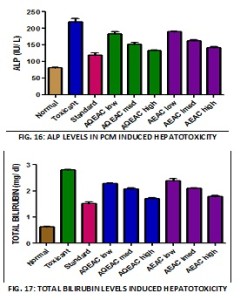 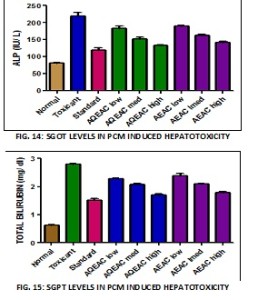 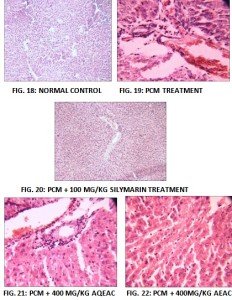 DISCUSSION AND CONCLUSIONS: Liver injury is caused by different agents, such as chemicals, alcohol, viruses, and auto-immune diseases. Acetaminophen, a mild analgesic and antipyretic drug, was developed in the last century. It was reported that large doses of acetaminophen could produce serious liver necrosis in humans and in experimental animals.

Hepatic cells appear to participate in a variety of enzymatic metabolic activities and both carbon tetrachloride and paracetamol produced marked liver damage at the given doses as expected. Administration of carbon tetrachloride elevated the serum levels of SGOT, SGPT, ALP and bilirubin significantly, due to its enzymatic activation of CCl3 free radical, which in turn alters the structure and function of liver cells.

Treatment with AQEAC and AEAC showed a dose-dependent protection against the injurious effects of carbon tetrachloride that may result from the interference with cytochrome P450, resulting in the hindrance of the formation of hepatotoxic free radicals. Paracetamol in larger doses produces liver necrosis after undergoing bio-activation to a toxic electrophile, N-acetyl-p-benzoquinone-imine (NAPQI) by cytochrome P450 monooxygenase.