ABSTRACT: The study was to evaluate the hepatoprotective activity of aqueous extract of Pyrus pashia Buch.-Ham. ex D. Don against carbon tetrachloride-induced hepatotoxicity in mice. Hepatotoxicity was induced by CCl4 30% in olive oil (1ml/kg i.p.). Mice were treated with aqueous extract of P. pashia at doses of 250 and 500 mg/kg b.wt. orally for 14 days. There were two group pre-treatment (once daily for 14 days before CCl4 intoxication) and post-treatment (2, 6, 24 and 48 hr after CCl4 intoxication) groups. The observed effects were compared with a known hepatoprotective agent, silymarin. Pre-treatment and post-treatment groups of aqueous extract of P. pashia significantly reduced elevated serum levels of serum transaminases, alkaline phosphatase, and bilirubin and increased the level of total protein as compared to CCl4 treated group. The histopathological study also confirms the hepatoprotection. Preliminary qualitative phytochemical analysis of the plant revealed the presence of carbohydrates, phenolic compounds, tannins, and saponins. The data are expressed as ± S.E.M. one-way analysis of variance (ANOVA) followed by multiple comparisons with the Tukey post hoc test to compare different parameters between the groups.

INTRODUCTION: Liver is an important target organ for toxicity produced by drugs, xenobiotics and oxidative stress because of its unique metabolism. All over the world liver disorders have become serious health problem and a cause of morbidity and mortality due to limited prevention and treatment options 1. For the prevention of liver injury, a growing interest has emerged around the globe in rediscovering medicinal plants. To stimulate liver function and offer protection, many folk remedies of plant origin have been tested for their hepatoprotective activity 2.

In developing countries, herbal medicine is considered to be of great importance among different rural and indigenous communities and the therapeutic value of medicinal plants has been exploited for the management of various disease conditions. Herbal medicines have gained more attention and popularity because of their safety and efficacy 3.

In recent years, due to the absence of efficient hepatoprotective drugs in modern medicine, a large number of studies have been done searching for hepatoprotective constituents from natural products and herbal medicines 4. Pyrus pashia Buch.-Ham. ex D. Don (Rosaceae) is distributed in the forest of Himalayan region from North East India to Hindu Kush mountain. It is a medium size deciduous tree commonly known as wild pear. The plant has both nutritional and therapeutic importance, it possesses antimicrobial activities and is effective against Klebsiella pneumonia, Shigella flexneri and Escherichia coli 5. It is used as laxative and sedative. Fruits are used for the treatment of dehydration and various other ailments like gastrointestinal disorder, fever, headache, hysteria and epilepsy 6. The fruit juice is astringent and diuretic and is used to treat leishmaniasis, sore throat, abdominal pain, anemia and also used in the improvement of spleen. It also exhibited spasmolytic bronchodilator 7. P. pashia is used for treating jaundice and liver disorders as per the ethnobotanical knowledge obtained from local herbal practitioners, though literature regarding the effect and use of this plant for treating liver diseases are not available.

In the present study, we aimed to determine the hepatoprotective activity of aqueous extract of Pyrus pashia Buch.-Ham. ex D. Don in CCl4 induced hepatotoxicity.

Preparation of Extracts: The plant parts were shade dried, powdered with a mechanical grinder and passed through a sieve and were extracted with distilled water in the ratio of 1:10 w/v. The extract thus obtained was concentrated and dried in a vacuum desiccator. The aqueous extract of P. pashia was prepared fresh each time after triturating with distilled water immediately before the administration.

Experimental Animals: The Swiss albino male mice, 8-12 weeks old (weighing between 22-28 gm) were procured from Pasteur Institute, Shillong, Meghalaya. The animals were housed in large, clean polypropylene cages in a temperature-controlled room (27 ± 3 °C) with 12 hr light and dark cycle, free access to water ad libitum and fed with standard pellet diet. All the experiments and protocols described in the present study were approved by the Institutional Ethical Committee (IEC) of Assam University, Silchar, (Reg. No. IEC/ AUS/2013-045 dt-20/3/13).

Dose Selection: Dosage of the extract was determined after toxicity test (LD50) median lethal dose described by Lorke 16. The 250mg/kg b. wt and 500mg/kg b. wt were taken as the low and medium doses.

Histopathology: The liver was collected and fixed in 10% formalin, cleared in xylene and embedded in paraffin. Section of 4-5µm thickness was prepared and stained with haematoxylin and eosin (H-E) dye and observed under a microscope to examined histopathological changes in the liver.

Statistical Analysis: The data are expressed as ± S.E.M. one-way analysis of variance (ANOVA) followed by multiple comparisons with the Tukey post hoc test to compare different parameters between the groups. Statistical analysis was performed using the SPSS statistical software package, version 21.0 for windows. The results were considered to be statistically significant at p value <0.05.

Similar results were obtained supported by the histopathological study (Fig. 2). The normal control group showed cells with distinct hepatic cells and sinusoidal spaces (Gr. I). Liver sections of the toxic control group treated with CCl4 showed disarrangement and degeneration of hepatocytes with intense centrilobular necrosis and vacuolization (Gr. II). In the group of animals treated with the aqueous extract of P. pashia at doses 250mg/kg and 500mg/kg in both the pre-treatment and post-treatment groups showed portal vein congestion, less disarrangement and degeneration of hepatocytes with less vacuolization and an absence of necrosis (Group III, IV, VI and VII). The liver sections of the silymarin treated group at a dose 100mg/kg in both the treatment groups showed a cell damage protection (Group V and VIII). These histopathological studies confirmed the hepatoprotective effect of aqueous extract of P. pashia against CCl4 induced hepatotoxicity. 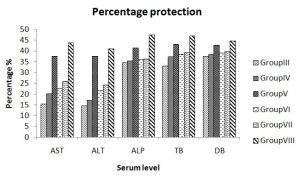 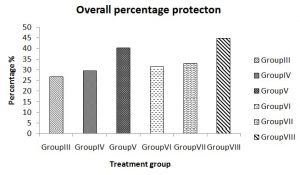 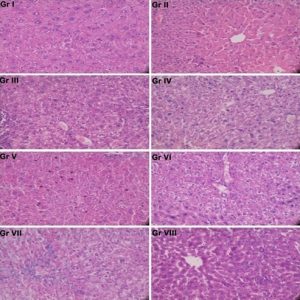 FIG. 3: EFFECTS OF P. PASHIA ON THE LIVER HISTOPATHOLOGICAL PHOTOMICROGRAPHS OF THE EXPERIMENTAL GROUPS OF MICE

The liver sections from the normal control animals (Group I) showed cells with distinct hepatic cells and sinusoidal spaces. The toxic control animals group (Group II) showed disarrangement of hepatocytes with intense necrosis and vacuolization. The pre- and post- treatment groups at 250mg/kg and 500mg/kg and silymarin at 100mg/kg (Group III - VIII) showed portal vein congestion, less disarrangement and degeneration of hepatocytes and also the absence of necrosis.

DISCUSSION: A large number of people especially the rural people depend on natural resources for their survival. The study of cultural uses of medicinal plant species is significant to contemporary medicine. Liver is responsible for detoxification of chemicals and drugs. This makes it the target organ for all toxic chemicals because of its vital and unique functions. Any injury or impairments of its function may lead to several implications on health. CCl4 is the most common and extensively used hepatotoxin in the experimental study of liver diseases. Administration of CCl4 causes acute liver damage that mimics the damage done to the liver due to natural causes. CCl4 is bio transformed by cytochrome P450 to free radicals (trichloromethyl, Cl3C-CCl3 (hexachloroethane), COCl2 (phosgene) which are to known to involve in the pathogenesis of liver.

This result in the necrosis of liver due to peroxidation of lipids, covalent binding of macro- molecules, disruption of metabolic mechanisms in mitochondria, decrease in the levels of phopsho-lipids, increase in triglycerides levels, inhibition of calcium pumps of microsomes 23. The results of the present study revealed that acute toxicity study (LD50) of the aqueous extract of P. pashia was greater than 5000mg/kg implying that the extract was relatively safe 24.

The increase in the serum ALT and AST levels by CCl4 is attributed to the hepatic structural damage because these enzymes are normally localized to the cytoplasm and released into the circulation after the cellular damage has occurred 25. The serum AST and ALT levels significantly decreased in the pre- and post-treatment groups of aqueous extract of P. pashia suggesting that it effectively ameliorates the hepatotoxicity induced by CCl4. Reduction in the AST and ALT levels indicates the stabilization of plasma membrane and restoration of hepatic tissue damages caused by CCl4.

Hepatic injury induced by CCl4 results in the elevation of ALP and bilirubin levels which could reflect a pathological alteration in the biliary flow 26. P. pashia treated groups reduced the level of serum ALP with the concurrent depletion of bilirubin level suggesting that the extract was able to stabilize biliary dysfunction induced by CCl4. The reduction in the level of total protein is attributed to the produced damage and is localized in the endoplasmic reticulum resulting in the loss of P450 leading to its functional failure. This leads to decrease in protein synthesis and accumulation of triglycerides 27. The present study demonstrates a decrease in serum protein levels in the CCl4 treated group but increase in the P. pashia treated groups suggesting the stabilization of endoplasmic reticulum leading to protein synthesis. The aqueous extract of P. pashia possesses various phytochemicals including flavonoids, saponins, tannins and a polyphenolic compound which are natural antioxidants and can scavenge free radicals. So, the presence of these components may be attributed to the hepato-protective activity in the plant 28.

The extent of hepatic damage was also assessed by histological evaluation along with the level of various biochemical parameters. The slides of the liver of only toxic control mice group showed more extensive cell damage. Slides of the of the liver mice treated with the plant extract showed the restoration of damage due to necrosis and inflammation and these were comparable with the reference drug slide indicating its possible anti-hepatotoxic action.

CONCLUSION: In the present study, aqueous extract of P. pashia restored the elevated serum enzyme levels suggesting that it has hepato-protective capacities in CCl4 intoxicated mice. The protective effect observed could be attributed to the presence of various phytochemicals which are responsible for the restoration of liver damage. Further studies are required to identify and characterize the active principle responsible for the hepatoprotective activity of the plant.

ACKNOWLEDGEMENT: We express our sincere thanks to Silchar Medical College and Hospital, Silchar for the help and advice in histopathological examination. We are also thankful to the Biotech Hub, Department of Life Science and Bioinformatics, Assam University, Silchar for the photomicrograph. A special acknowledgment is owed to the Director, Botanical Survey of India, Shillong for identification of the plant Pyrus pashia Buch.-Ham. ex D. Don.