ABSTRACT: Cerium oxide is an oxide of the rare earth metal which is widely used for several disorders. However, there are no complete toxicity studies done on it. The purpose of present study is to evaluate acute and Anti-hyper lipidemic activity of cerium oxide nano particles on Wistar albino rats. In this study, Cerium oxide was administered to six rats in different groups in different concentrations (100mg/kg and 200mg/kg) observed for 14 days. After the course, blood was collected and it was calculated for biochemical parameters like serum triglycerides, serum cholesterol, Very low density lipoprotein cholesterol (VLDL), Serum HDL cholesterol, Serum LDL cholesterol levels in the test and standard group of animals which were compared with ccl4 induced group of animals. The results showed that the mechanism of action of anti-hyper lipidemic activity of Cerium oxide nano particles on dose dependent manner.

INTRODUCTION: Hyperlipidimia is a highly predictive risk factor for atherosclerosis, coronary artery disease, and cerebral vascular diseases. Atherosclerosis of arteries is a generalized disease of the arterial network known as a progressive and silent killer disease characterized by the formation of lesions called atherosclerosis plaques in the walls of large and or medium sized coronary arteries and which reduces blood flow to the myocardium - called coronary artery disease (CAD). Abundant evidence links Hyperlipidimia to atherosclerosis. Clinical trials showed conclusively that lowering serum cholesterol reduces morbidity and mortality from CAD in patients with established CAD and also reduces new CAD events and mortality in patients without established CAD

Condiments, medicinal plants, fruits used in day-to-day preparation of food in Indian kitchens have been identified as hypolipidemic in Ayurveda.

Diabetes mellitus (DM) is a group of syndrome characterized by hyperglycaemia and altered metabolism of carbohydrates, lipids and proteins. Chronic hyperglycaemia during diabetes causes glycation of body proteins that in turn leads to secondary complications affecting eyes, kidneys, nerves and arteries. Increasing evidences from both experimental and clinical studies suggest that oxidative stress plays a major role in the pathogenesis of DM. Free radicals are formed disproportionately in diabetes by glucose oxidation, non-enzymatic glycation of proteins and the subsequent oxidative degradation of glycated proteins. Abnormally high level of free radicals and the simultaneous decline in antioxidant defense mechanisms may lead to the damage of cellular organelles and enzymes, increased lipid peroxidation and development of insulin resistance. Current drugs used for the treatment of diabetes are associated with several side effects and hence there is need for effective, safe and better oral hypoglycaemic agents. In the indigenous system of medicine, Ayurveda, a mention has been made on a number of plants for controlling diabetes but only a few have been scientifically evaluated and the active principles are isolated 1.

Nano medical approaches to drug delivery centre on developing nano scale particles or molecules to improve drug bioavailability. Bioavailability refers to the presence of drug molecules where they are needed in the body and where they will do the most good. Drug delivery focuses on maximizing bioavailability both at specific places in the body and over a period of time. This can potentially be achieved by molecular targeting by nano engineered devices. It is all about targeting the molecules and delivering drugs with cell precision. More than $65 billion are wasted each year due to poor bioavailability. In vivo imaging is another area where tools and devices are being developed. Using nano particles contrast agents; images such as ultrasound and MRI have a favourable distribution and improved contrast. The new methods of nano engineered materials that are being developed might be effective in treating illnesses and diseases such as cancer 2.

Healthy male and female Wister albino rats at 8 weeks of age the preferred rodent’s species is the rat although other rodent species may be used. Normally female rats are used. This is because literature survey of conventional LD50 tests shows that usually there is little difference in sensitivity between sexes, but in those cases where differences are observed, females are generally slightly more sensitive. Healthy young adult animals of commonly used laboratory strains should be employed. Females should be nulliparous and non pregnant. At the commencement of its dosing, each animal should be between 8 and 12 weeks old and its weight should be fall in an interval within + 20% of the man initial weight of any previously dosed animals.

The animals are randomly selected, marked to permit individual identification, and kept in their respective cages for at least 5 days prior to dosing to allow for acclimatization to the laboratory conditions.

By using Albino Wister rats five groups of six animals in each group, the animals are separated randomized and grouped, all group of animals are served up to 14 days treatment

The animals were kept starved over night on 14th day of experiment 3. On the next day the blood was collected by retro orbital puncture and the animals were sacrificed by decapitation. The liver and kidney in each case were dissected out, blotted of blood, washed in saline and stored in a freezer. The clear serum was separated by centrifugation at 2500 rpm for10 min serum were used for various biochemical estimations like serum triglycerides, serum cholesterol, High density lipoproteins, Very low density lipoprotein cholesterol(VLDL), Serum total cholesterol, Serum HDL cholesterol, Serum triglycerides, Serum LDL levels were estimated by using standard reagent kits.

Acute toxicity study Acute toxicity studies were conducted in albino mice by using OECD-423 guidelines, in dose increasing method for Cerium oxide Nano particles. Animals are treated with higher dose of cerium oxide 2000 mg/kg. It was found that even at 2000mg/kg dose did not manifest any significant abnormal signs, mortality, behavioral changes, body weight changes; Toxicity signs such as Tremors, Salivation, Diarrhea and Lethargy were not observed. Confirming practically these are not has toxic activity

TABLE 2: EVALUATION OF BIOCHEMICAL PARAMETERS IN CONTROL AND TEST ANIMALS 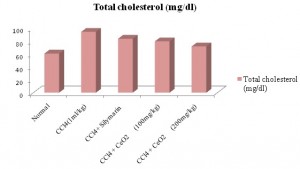 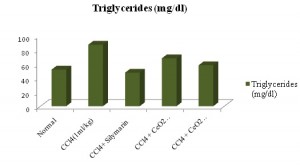 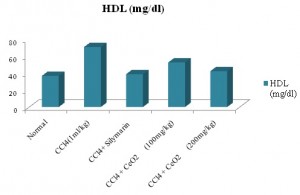 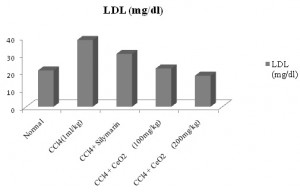 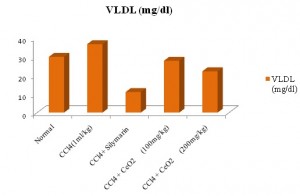 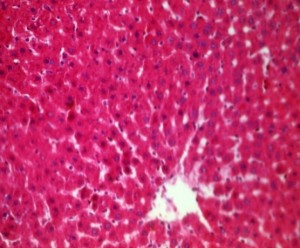 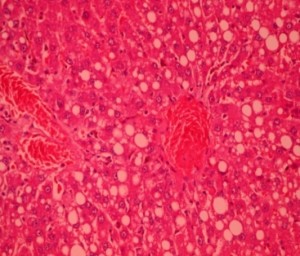 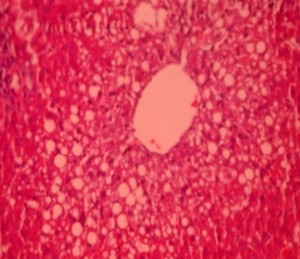 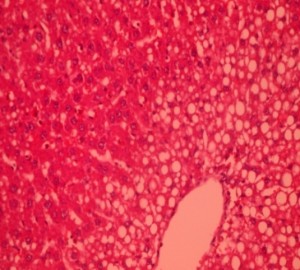 DISCUSSIONS: It is well established that Ccl4 induces hepatotoxicity by metabolic activation; therefore it selectively causes toxicity in liver cells maintaining semi-normal metabolic function. Ccl4 is bio-transformed by the cytochrome P450 system in the endoplasmic reticulum to produce trichloromethyl free radical (•Ccl3). Trichloromethyl free radical when combined with cellular lipids and proteins in the presence of oxygen form trichloromethyl peroxyl radical, which may attack lipids on the membrane of endoplasmic reticulum faster than trichloromethyl free radical 4. The Ccl4 has been used as a tool to induce hepatotoxicity in experimental animals 5. This toxic chemical caused peroxidative degradation in the adipose tissue resulting in fatty infiltration of the hepatocytes 6. Silymarin also exerts antioxidant and membrane stabilizing activity and attributes important for liver secretion and uptake of plasma lipoproteins and so alter in lipid metabolism.

including cytoplasmic vacuolization of the hepatocytes, fatty infiltrations, leucocytic infiltrations, congestion of blood vessels, and fibrosis 7. Similar results were obtained by in albino rats intoxicated with Ccl4. Moreover, the current results are in accordance with those of and who reported that liver injury including marked alteration of the entire liver structures with degenerative changes were observed after Ccl4 administration. Fatty infiltrations were observed in liver of Ccl4 treated rats 8, 9. The present study showed Cerium oxide nano particles possess Antihyperlipidemic activity in Ccl4 induced wistar albino rats.

In the present study, treatment with the Cerium oxide nano particles made the SC, STG and VLDL-c levels to more or less towards normalization indicates that CeO2  significantly (p<0.05) protects the liver injury induced by Ccl4 in dose dependent manner. The above results confirm that the CeO2 have Antihyperlipidemic activity.

CONCLUSIONS: Acute toxicity studies were conducted in albino mice by using OECD-423 guidelines, in dose increasing method for Cerium oxide nano particles. It was found that even at 2000mg/kg dose had not shown any mortality, confirming practically these are not having toxic activity.