Acetylcholine satisfies all criteria for a transmitter substance. Its most widely recognized action sites are the endings of vertebrate motor nerves, the endings of the automatic pre ganglionics and the parasympathetic post ganglionics. It appears also to be the transmitter of motor nerves in all advanced invertebrate animals except the arthropods where it seems to separate at the endings of sensory nerves. Acetylcholine is concerned with various visceral functions in both invertebrates and vertebrates. The impact of 20% ethanol (w/v) at selected doses of 5gm/kg wt over 5 and10 weeks in vivo and 100-1000 µl in vitro on the heart and aortic tissue acetylcholine content activity was reported. Alcohol is selected doses appeared to inhibit the rat and aortic tissue based Ach levels both in vitro and in vivo.

INTRODUCTION:The acetylation of the nitrogenous alcohol choline gives rise to acetylcholine, now recognized as neurotransmitter in all major groups of animals. The biosynthesis is catalyzed by choline acetylase and readily reversed by acetyl cholinesterase as indicated in the following reaction. 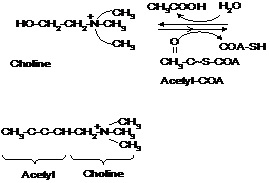 Claude Bernard launched the history of transmitter pharmocology in 1857, when he discovered that nerve stimulation failed to excite muscles that were poisoned with a plant alkaloid, curare, even though the muscle remained responsive to direct stimulation.  Bernard Correctly concluded that this substance blocked excitatory events at the neuromuscular junction.  It is now known that curare acts by competing with Ach for receptor sites on the motor end plate, with highly purified preparations of curare (d-tubocurarine) muscular excitability is gradually reduced in accordance with the dose; thus, this substance has found a valuable place in clinical medicine as well as physiology.

Effects on basal or stimulated Ach release have been described in mammalian brain1, 2, 3, 4, 5, 6. Aplysia ganglious 7, 8 and smooth muscle 9, 10, 11, 12, 13, through prejunctional or retrograde actions, other concern the physiological role of NO on the skeletal muscle of the adult neuromuscular junction 14, 15, 16, 17, 18, on its development 19 or in pathological situations.

Likewise NO and Ach are interrelated with regard to their physiological functioning 20 21.

MATERIAL AND METHODS: Albino rats of the weight range 125 ± 5 gm were selected for the current study.  Animals were maintained at a constant temperature of 15 ± 5oC. The rats were divided into three groups of seven each and were maintained in separate cages. They were fed ad libitum with commercial rat feed supplied by Kamadhenu Agencies, Bangalore, India.

Treatment of Animals: For in vitro studies 20% alcohol 100-1000µl was used. For in vivo studies group II rats were gavaged with 5g/kg body of alcohol 20% (w/v) over 5weeks (weekly doses). Group III rats were gavaged with 5gm/kg body weight of alcohol over 10 weeks (weekly doses) and group I animals acted as normal control ones. After treatment of animals, they were anesthetized with chloroform and were dissected. The tissues (heart and Aortic arches – cleared) were isolated sliced weighted and were transferred into clean test tubes. The tubes were kept in boiling water bath for 5 minutes to inactivate the acetyl cholinesterase (AChE) enzyme activity and to release bound Ach. The study of by Ach content was estimated by the method of Hestrin as described 22.

Statistical Analysis: For each parameter, the mean of individual observation (for both control and experimental groups were taken into consideration). Statistical significance of the data was analyzed through two was ANOVA (analysis of Variance); SNK (Student – Newman - Keuls) test and regression analysis.

RESULTS: The data in table 1 & 2 shows the trends obtained for Ach levels of the heart and aortic tissues under selected doses of alcoholic stress.  Alcohol appeared to inhibit the heart and aortic tissues Ach levels in vitro and in vivo and the changes were found to be statistically significant (P<0.001) for 500µl and 1000 µl of 20% alcohol (w/v) concentration in vitro and 5g/kg wt over 5 and 10 week periods treated rat tissues in vivo and the percent depletion was found to be more for the higher doses of alcohol employed in this study.

TABLE 1: IMPACT OF ALCOHOL ON RAT HEART AND ACETYLCHOLINE CONTENT LEVELS IN VITRO

TABLE: 2 IMPACT OF ALCOHOL ON RAT HEART AND ACETYLCHOLINE CONTENT LEVELS IN VIVO

DISCUSSION: They 2 have cited that alcohol alters the Ach levels and Ach further evoke significant membrane depolarization in rat major pelvic ganglion.  Ach evoking large long-term effects on NMDA receptors in rats has been reported by 4.  They 3 studied the effect of ethyl alcohol on the contractile activities of canine gastric corpus and fundus circular muscles and they reported that alcohol alteres the normal functioning of Ach 23, showed ethanol as to modulate the receptor c-protein function in the rat cerebral cortex.  They 7 have studied the biphasic effect of alcohol activity on membrane associated AchE activity their studies on alcohol versus Torpeda californica support impaired activity of the key enzyme AchE that regulates Ach levels by alcohol, Alcohol developing pathological symptoms in experimental models with reference to Ach was also worked out by 24. All these reports clearly depict that alcohol impairs the normal functioning of Ach in different experimental models.

In the current study, depletion in the rat heart and aortic tissues in vitro and in vivo Ach levels were observed under alcoholic stress shown in tab (1&2).  The changes observed were perfectly in a dose and time – dependent manner.  As the Ach binding to its Ach receptor on ET cells accelerate intracellular Ca2+ levels which in turn regulates NO release in SMC 25, 26 . The lowered levels of Ach in the heart and aortic tissues by alcohol in the present investigation may not be enough to stimulate its receptors and this may impart lead to impairment of NO production in the cardiovascular system (Due to higher costs of assay kits receptor binding studies were not under taken in the present study).