ABSTRACT: The demand for herbal medicines is growing at a drastic rate due to their improved pharmacological actions, minimal side effects, and cost-effectiveness. The ever-increasing cost of chemotherapy ruined the economic stability of many families. This led to the discovery of herbal medicines for cancer treatment. Tribes of Western Ghats have been using the roots of Apama siliquosa for cytotoxic activity. The methanolic and aqueous root extracts of Apama siliquosa Lamk were used to prepare different concentrations. These different dilutions of extract were used to carry out brine shrimp lethality assay & the LC50 value was determined. Cell line study by MTT assay using cancerous cell line (MCF7 cells-human breast adenocarcinoma cells) & LC50 value was determined. GCMS study on plant extract was carried out. The methanolic extract shows the presence of Caryophyllene oxide (m/z 220) methyl ester of Aristolochic acid I (m/z 355), Aristolactam I (m/z 295). Aristo lactam II (m/z 265), and Aristo lactam III (m/z 281). The aqueous extract shows the presence of Aristo lactam I (m/z 280). Aristo lactam II (m/z 264). Caryophyllene oxide and Aristolochic acids are terpene and alkaloid, respectively. LC50 value for aqueous and methanolic extract was found to be 102.32µg/ml & 91.20µg/ml respectively by brine shrimp lethality assay and the same by MTT assay was found to be 117.527µg/ml & 87.4056µg/ml respectively for breast cancer cell line (MCF7 cells). These led to the conclusion that both extracts showed excellent toxicity to the naupli and mild toxicity to cell lines.

INTRODUCTION: Plants have been used for medicinal purposes since ancient times. The ever-increasing cost of cancer chemotherapy ruined the economic stability of many families 1. Between 9 and 81% of cancer patients are said to use at least one type of complementary or alternative therapy after their cancer diagnosis 2. Apama siliquosa (L.) belonging to Family Aristolochiaceae, is a shrub found in evergreen forests of the Western Ghats from Konkan to Kerala.

It is extensively studied for various pharma-cological activities such as antibacterial, anti-fungal 3, anti-diabetic and anti-inflammatory 4 activity. The compound aristolochic acid present in Apama siliquosa is expected to show tumor inhibitory activity hence could be used for cancer therapy 5.

The mature roots of A. siliquosa are reportedly used by Ayurvedic physicians of Konkan and Malnad districts of Karnataka, India for the treatment of dysentery, cholera, carbuncles and inveterate ulcers. Like other plants belonging to the family Aristolochiaceae, it is supposed to have virtues in the cure of snakebites and is regarded as one of the most powerful antidotes to poison known on the west coast 6. Cancer is a major cause of death worldwide. Thus, the incidence of and mortality rate from cancer has become globally important 7. Molecular targeted agents are currently being studied in all treatment settings including that of chemoprevention, which is defined as the use of natural or synthetic nonessential dietary agents to interrupt the process of carcinogenesis and to prevent or delay tumor growth 8, 9. The available treatment methods include surgery, chemotherapy, and radiation 10. The currently available methods of treatment induce significant side effects, and therefore the need for alternate adjuvant therapies has arisen 11.

Chemicals: All the solvents used for extraction were of analytical grade.

Phytochemical Screening: Both methanolic and aqueous extract were subjected to qualitative analysis for the identification of phytochemical constituents. The phytochemical screening was performed based on the methods described by Nayek and Pereira 12.

Cell Line Studies: Cells (1 × 105/ well) were placed in100µl of medium/well in 96-well plates. After 48 h incubation the cells reached the confluence. Then, cells were incubated in the presence of various concentration of the samples in 0.1% DMSO for 48 h at 37 ºC. After removal of the sample solution and washing the phosphate-buffered saline (pH7.4), 20µl/well (5mg/ml) of 0.5% 3- (4, 5-dimethyl-2-thiazolyl)-2, 5- diphenyl-tetrazolium bromide cells (MTT) phosphate- buffered saline solution was added. After 4 h incubation, 0.04M HCl/isopropanol were added. Viable cells were determined by the absorbance at 450nm. Measurements were performed, and the concentration required for a 50% inhibition of viability was determined graphically. The absorbance at 450nm was measured with UV-spectrophotometer using wells without a sample (blank). The effect of the sample on the proliferation of Mcf-7 cells was expressed as the % cell viability, using the following formula:

The assay was performed in triplicates of each of the extracts. The mean of the cell viability values compared to control to determine the effect of the extract. Cells and % viability was plotted against concentration of the plant extract. The maximum concentration of the plant extract toxic to cells was recorded as the effective drug concentration. Control should be done to avoid false-positive and false-negative results, which occurs as a result of background interference by inclusion of particles. Such interference can lead to the overestimation of viability. This is controlled by subtraction of the background absorbance of the cells in the presence of the particles without the assay reagent 13.

Percentage of growth inhibition was calculated using the following formula:

Interpretation: Viable cells are determined by taking the absorbance at 450nm using UV spectrophotometer of both sample and blank. Percentage cell viability was calculated using the above formula. A graph was then plotted using % viability v/s concentration of extract. From the graph, the maximum lethal concentration and concentration to cause lethality to 50% of the population i.e., is IC50 can be determined. This value was then compared with the standard, and the potency of the sample was concluded 15.

Brine Shrimp Lethality Assay: Brine shrimp (Artemia salina), also known by the name the ‘sea monkey’, is a simple zoological organism (marine invertebrate) that is about 1 mm in size. Artemia salina (L.) is a primitive aquatic arthropod (salt lakes) of the Artemiidae family with an age of about 100 million years. Their freeze-dried cysts (A. salina eggs) have several years of viability and can be hatched into larvae without special equipment. This is a general bioassay that is used for assessment of cytotoxicity testing of dental elements and marine natural products and antitumor agents, pesticides and screening of plant extracts for pharmacological activity 16, 17, 18.

Hatching Brine Shrimp: Measure 3 liters of water and pour into the rectangular jar. Weigh about 27g of table salt and add it into the jar. Mix with spatula. Place the tip of an airline from an air pump into the bottom of the jar and add about 15g of brine shrimp eggs and mix. Switch on a light (60-100 Watt bulb) placed a few inches away from the jar. After 20-24 h, the nauplii will hatch. Observe the eggs and nauplii. Collect the nauplii after the next 24 h. Hatched nauplii must be separated from the empty egg. It can be done by turn off the air and switch off the lamp. The empty egg will float while the brine shrimp will concentrate in water column 19, 20, 21, 22.

Toxicity Testing: Ten nauplii were transferred to each vial. Yeast suspension was added to the vial for nutrition of shrimps. Expose the nauplii to different concentrations of the plant extract. Positive and negative controls were placed, omitting the sample. Rutin was used as positive control. Count the number of survivors and calculate the percentage of death after 24 h.

Interpretation: After 24 h naupli was examined. Living naupli was counted, and the average was determined. Percentage mortality was then calculated using the formula.

The mean percentage mortality rate was obtained and it was then plotted against the logarithm of concentration. From the graph the concentration required to kill 50% of naupli was calculated i.e. IC50 value. The IC50 value of the sample was then compared with the standard.

Procedure: GCMS analysis of root extract of Apama siliquosa was made in Agilent 7890 with 5975C (with triple axis detector).Instrument was under computer control at 80eV. About 3µL of the extract was injected into the GCMS with the help of micro syringe. The components were separated and were eluted from the column. As they entered the detector which was capable of generating an electronic signal in response to the detected compound. Bigger signals were obtained for high concentrations in the sample, which was then processed by the computer. Based on the signal the Chromatograph was generated by the computer. After elution they enter the electron ionization detector where bombardment with stream of electrons takes place resulting in fragmentation. Fragments are charged ions with certain mass, Mass spectrum graph (finger print of the molecule) was obtained based on mass-charge ratio 23.

Interpretation: The compound were identified by comparing the spectrum with those in the libraries.

GCMS study on plant extract was also carried out to study the active constituents present in the extract. Fig. 9 shows the GC MS profile of aqueous and methanolic extracts. The methanolic extract shows the presence of Caryophyllene oxide (m/z 220) methyl ester of Aristolochic acid I (m/z 355), Aristolactam I (m/z 295). Aristo lactam II (m/z 265), and Aristo lactam III (m/z 281). The aqueous extract shows the presence of Aristo lactam I (m/z 280). Aristo lactam II (m/z 264). Caryophyllene oxide and Aristolochic acid are terpene and alkaloid, respectively and anticancer research studies have been already proven for both these compounds. Tavakoli, Vatandoost et al., evaluated various biological properties of essential oil of Ferulago trifida boiss and 58 compounds were identified which include E-verbenol (9.66%), isobutyl acetate (25.73%), and E-β-caryophyllene (8.68%). The oil showed cytotoxic activity towards the brine shrimp with an LD50 value of 1.1µg/ml and on three cancerous cell lines (Mcf-7, A-549 and HT-29) with IC50 values of 22.0, 25.0 and 42.55µg/ml. This led to the conclusion that it has good toxic effect towards brine shrimp and MTT assay on three cancerous cell lines 24. Zheng pan, shuanke wang et al., conducted study on MG-63 human osteosarcoma cells to determine antitumor and apoptotic effect of caryophyllene oxide. Cell viability as evaluated by MTT assay and by wound healing assay. Results showed that it has both dose-dependent and time-dependent effects. At 20, 80,120µM concentrations, the cell migration was found to be 94.2, 67.1 and 14.8%. IC50 values was found to be 43.2, 31.6 and 24.2µM at 24, 48, and 72 h. This concluded that cytotoxicity increases with increase in incubation time 25. Wahid chaouki, David Y leger et al., studied potential activity on breast cancer (Mcf-7) by using four different extracts of Aristolochia baectica and Origanum compactum. Chloroform extract of A.baectica showed 216.06±15 µg/ml as the IC50 value and that for ethyl acetate extract of O. Compactum was found to be 279.51±16 µg/ml which confirmed the presence of aristolochic acid and botulinic acid26. These reviews provide a backbone for our research work and helped us to conclude that the compound that we have identified by GCMS i.e. Caryophyllene oxide and Aristolochic acid are having selective anticancer activity hence we reached to the conclusion that the root extract of Apama siliquosa Lamk has got potent cytotoxic activity and selective anticancer activity. 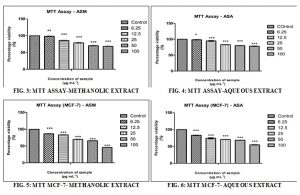 TABLE 2: % DEATH OF NAUPLII BY METHANOLIC EXTRACT AND AQUEOUS EXTRACT 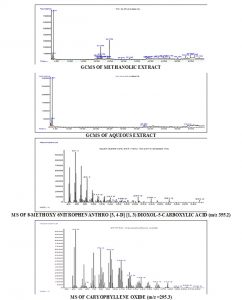 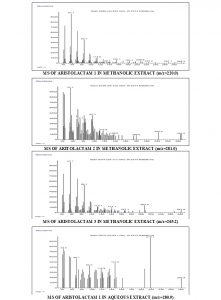 CONCLUSION: The research was carried out to evaluate the cytotoxic effect of the methanol and aqueous extract of the roots of Apama siliquosa Lamk. The methanolic and aqueous extract was prepared. Cell line studies were carried out using F929 fibroblast cells and Mcf 7 cells which revealed that methanolic extract showed excellent activity against Mcf 7 cell line at a concentration of 87.4056 µg/ml.

The cytotoxic effect of the extract was further evaluated by brine shrimp lethality assay. The potent cytotoxic activity was observed at 91.20 µg/ml for methanolic extract and 102.32µg/ml for aqueous extract.

The GCMS analysis showed the presence of a terpene and an alkaloid that is Caryophyllene oxide and Aristolochic acid. The reviews state that both these compounds possess anticancer property and hence we conclude that the root extract of Apama siliquosa lamk shows anticancer property

Since, the plant extracts showed excellent cytotoxicity on cancerous cell lines in spite of normal cell lines, the root extract of Apama siliquosa Lamk has selective anticancer property so it can be selected as a choice in management or treatment of cancer.

ACKNOWLEDGEMENT: The author would like to express gratitude to the Principal, Nirmala College of Pharmacy, Muvattupuzha Kerala. We are also thankful to Biogenix, BRMAS, KRRA 31, Keshavadeva Road, Poojappura, Thiruvanan-thapuram, Kerala, for providing facilities for cell- lines studies.

CONFLICTS OF INTEREST: The authors have no conflicts of interest to declare that they are directly relevant to the content of this manuscript.