ABSTRACT: Objective: Kojic acid and arbutin are potent agents for effective treatment of hyperpigmentation. However, low photostability, low permeability and high irritancy exhibited by them make topical delivery a challenge. The aim of this study was to develop novel photostable and highly penetrable formulation of kojic acid and arbutin to combat hyper-pigmentation effectively at lower concentrations in comparison to marketed conventional formulations. Methods: Kojic acid and arbutin loaded micro-emulsion based crème’ gel was formulated by the generation of water in oil system by spontaneous formation technique followed by incorporation into a gel. Thus manufactured by simple industry feasible technique and evaluated for effective reduction of skin irritancy, improvement in photostability, the penetrability of the hydrophilic drugs and anti-tyrosinase potential. Results: Comparative in-vitro and ex-vivo release study showed that microemulsion based crème’ gel not only provided sustained effect up to 24 h but also retained approximately 10 folds higher drug concentration of drugs in the skin as against conventional gel formulation. This novel formulation was not associated with any irritation potential and had a higher tyrosinase inhibitory effect when compared against conventional gel. Furthermore, microemulsion based crème’ gel when subjected to photostability studies was found to be stable over a period of 7-8 h of sun exposure, thus allowing day time use of the formulation. Conclusion: Microemulsion based crème’ gel can be easily used in daylight, thus, surpassing the limitation of photodegradation of actives to some highly irritant products when exposed to sunlight.

INTRODUCTION: Hyperpigmentation is a common aesthetically unappealing skin disorder marked by uneven localized or diffused darkening of the skin. Despite the availability of various treatment options, clinical management of hyper-pigmentation presents a challenge for dermato-logists.

Kojic acid and arbutin are both potent tyrosinase inhibitors used to treat hyper-pigmentation 1-4. Due to the virtue of low lipophilicity (logP -0.9 and -1.35) respectively of kojic acid 5 and arbutin 6, it presents low penetrability.

The aim of this study was to develop water in oil microemulsion based crème’ gel 7-10 to present the individual as well as combined advantages like sustained release profile, increase penetration of the hydrophilic agents, impart photostability and reduce skin irritancy 3. The study also focused on including smart excipients in formulation thus allowing reduction of drug concentration without affecting the therapeutics and also lowering the side effects. Kojic acid and arbutin are highly water soluble and also susceptible to photodegradation 11. Therefore, dermal penetration and photostability of these drugs can be increased with the help of microemulsion systems. Kojic acid and arbutin loaded water in oil microemulsion with and without frankincense oil were evaluated for its anti-tyrosinase activity, where microemulsion with frankincense oil 12, 13 exhibited higher inhibitory effect as against ME without frankincense oil. The results suggest that the microemulsion based crème’ gel can be an efficient topical delivery system to treat hyperpigmentation.

Solubility Studies and Emulsification Ability: The solubility of Kojic acid and arbutin in various surfactants and co-surfactants was determined by adding an excess amount of drug into 2 ml of each vehicle, followed by shaking (100 rpm) at 25 °C for 6 h. The samples were centrifuged at 10000 rpm for 10 min to remove excess drug and the concentration of drugs in the supernatant were measured by high-performance liquid chromate-graphy (HPLC) after appropriate dilution with ethanol. The mixture of selected surfactant and oil were vortexed and gradually aqueous phase was added to obtain a transparent microemulsion. The microemulsion was then checked for its percent transmittance to identify its homogeneity and uniformity.

Construction of Pseudoternary Phase Diagrams: Crodamol GTTC and Frankincense oil were used as the oil phase, Tween 80™ and Span 80™ as the surfactants and deionized water as the aqueous phase.

Pseudo ternary phase diagrams were prepared with surfactant mix ratios from 1:1, 1:2,1:3, 2:1, 2:3 to 3:2 (w/w). By applying the aqueous phase titration method, distilled water was titrated drop-wise to the oil and Smix mixture and vortexed. After each addition, the mixture was observed for appearance. The endpoint of the titration was the point where the solution turns turbid or cloudy. The pseudo ternary phase diagram was constructed using CHEMIX School 3.6 Software. Clear and stable microemulsion zones were identified.

Preparation of Kojic Acid and Arbutin Loaded Microemulsion (KA-ME): Due to the high water solubility of kojic acid and arbutin, the drugs were initially dissolved in the aqueous phase before adding of oily phase. The mixture of all constituents was further subjected to vortexing for proper mixing followed by sonication for removal of any air entrapment. The end product obtained was a transparent and uniform microemulsion formulation.  The final concentration of kojic acid and arbutin in the microemulsion was 0.3% and 0.7% respectively. The blank microemulsion was obtained without the incorporation of the drugs.

Characterization KA- ME and KA-ME Crème’ Gel: Various microemulsion were selected after plotting the pseudo ternary phase diagram and were subjected to thermodynamic stability studies including Heating Cooling cycles, Centrifugation Cycles, and Freeze-Thaw cycles. Further, the microemulsion which did not show any separation in these studies were selected and analyzed for other parameters mentioned in the text below. Percent transmittance of the microemulsion was anaylased using UV 1800 Shimadzu version 2.33 to determine transparency and uniformity of the microemulsion. Globule size viscosity, poly-dispersity index, zeta potential, and particle size test: Globule size of the formulation was analyzed by DMWB1-223ASC Motic microscopy. The viscosity of each of the drug-loaded sample was tested using a DV-III Ultra programmable rheometer D220 (Brookfield Engineering Laboratories, Inc., Middleboro, MA, USA) while the particle size, polydispersity index, and zeta potential of each of the drug-loaded sample were estimated using a (Malvern Zetasizer, UK (NICOMP™ 380 ZLS; Malvern, Santa Barbara, CA, USA). The evidence of the presence of W/O microstructure in the microemulsion was confirmed with cooling thermograms using Differential scanning calorimetry DSC Q20 (TA Instrument, New Castle, DE – USA) under a dynamic nitrogen atmosphere with a flow rate of 50 mL min-1 14. The final selected microemulsion was incorporated in gel to generate an optimized kojic acid and arbutin loaded microemulsion based gel formulation which was further analyzed for the following parameters.

In-vitro diffusion and the ex-vivo study were carried out in phosphate buffer pH 5.5 placed in Franz diffusion cell (DBK instrument) using dialysis bag and human skin respectively. The release profiles were fitted in kinetic models to evaluate release kinetics. Assay content and diffusion per hour release content were analyzed using the equation obtained by linear regression analysis from the calibration curve of kojic acid and arbutin by the HPLC method. In-vitro skin irritation study and tyrosinase activity study was performed to determine the cosmetic safety anti-hyperpigmented activity of the formulation.

Formulation Stability Test: The optimized microemulsion based crème’ gel was subjected to stability as per ICH guidelines (ICH Q1 R2). The formulations were stored at different temperatures and humidity conditions 25 ºC / 60 ± 5% RH and accelerated temperature (40 ºC / 75 ± 5% RH) for a period of three months. The optimized formulations stored in amber color spray bottles were evaluated for parameters like appearance, pH, content, drug release and viscosity over a period of 3 months

Solubility Studies and Emulsification Ability: The solubility of kojic acid and arbutin in the various surfactants and co-surfactants / cosolvents is shown in Fig. 1. To avoid leaching of the drug from the interface, which can further lead to the fast release of a drug, Tween 80 showing the least solubility for both the drugs was chosen as the co-surfactant along with Span 80 as the surfactant.

FIG. 1: SOLUBILITIES OF KOJIC ACID (A) AND ARBUTIN (B) IN SURFACTANTS AND CO-SURFACTANTS

Pseudo ternary Phase Diagrams and Preparation of Kojic Acid and Arbutin Loaded Micro-emulsion (KA-ME): To obtain the appropriate components of oil, surfactant and co-surfactant and their concentration range for microemulsion, Pseudo ternary phase diagrams were plotted for 1:1, 1:2, 1:3, 2:1, 2:3 and 3:2 ratio of Smix to oil. From these phase diagrams, the largest microemulsion region was observed in the 3:2 ratio of Smix. As shown in Fig. 2E, the area of w/o microemulsion is maximum at an S/coS ratio of 3:2. The exact composition according to water, surfactant, co-surfactant, and oil phases are shown in the table below.

Characterization KA-ME and KA-ME Based Crème’ Gel: The optimized microemulsion had a viscosity of 100.8 ± 0.82 cps and passed all the thermodynamic stability tests with percent trans-mittance of 98.81 ± 0.22% indicating transparency and clarity. The mean globule size of the water droplets was 98.73 nm with a polydispersity index of 0.31 presenting the monodispersity in the globule size distribution. Zeta potential of the microemulsion was found to be -20.9. This suggests that aggregation is not expected to take place due to the slightly negative charge of the droplets. Morphology, particle size, polydispersity, and zeta potential are depicted in Fig. 3A, 3B, and 3C. 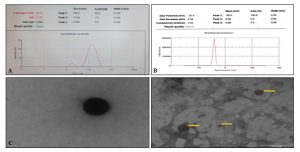 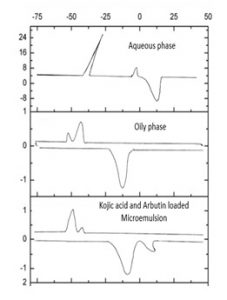 Further, the skin retention study revealed the actual situation. The amount of drugs retained at the end of 24 h from the formulations on to the human skin (used in the ex-vivo study) was 2.13 ± 0.23 and 29.45 ± 1.56 in the case of conventional gel and micro-emulsion based crème’ gel respectively. Thus, it can be concluded that the microemulsion based crème’ gel provided sustained release as well as better retention of a drug as against conventional gel which showed false sustained effect as it had high chances of getting wiped off soon after application without any retention of the gel on the skin surface.

The sustained release of drugs from the micro-emulsion maybe by the virtue of the resistance provided by the oily layer, which affects the release of the water-soluble drugs from the internal phase into the release medium. The kinetic study reports suggest that microemulsion based crème’ gel follows the Higuchi square root law, indicating sustained effect. 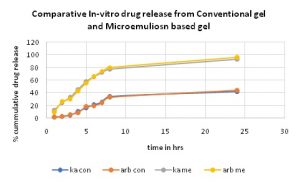 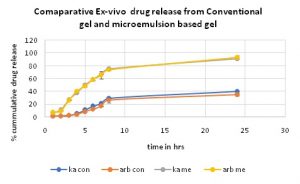 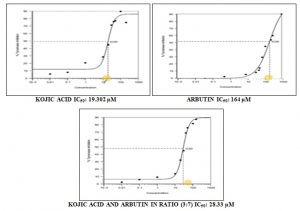 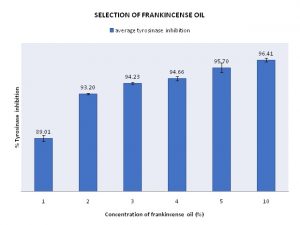 Irritancy scoring of kojic acid and arbutin loaded microemulsion based crème gel was 0, indicating that it does not have irritation potential. The images of CAM surfaces are depicted in the figure below. 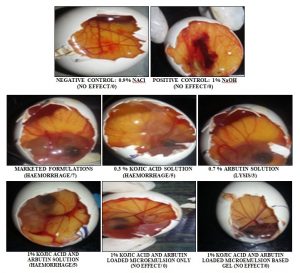 Formulation Stability Study: The novel system was evaluated for its appearance, microscopical properties, content, release, and pH for a period of 3 months. The results observed are mentioned below in Table 3. Stability studies conducted as per ICH guidelines suggest that the optimized micro-emulsion based crème’ gel was stable over a period of 3 months. Further, the microemulsion based gel was exposed to sunlight for a period of 7 h, and the photostability of the formulation was checked. Photostability studies reports revealed that the formulation was found to be stable ever after 7- 8 h of exposure to UVA/UVB irradiation (280-400 nm), thus, suggesting that the optimized micro-emulsion based crème gel can be used by patients even when exposed to sunlight.

CONCLUSION: The research work proves to be a promising strategy to facilitate better penetration of the water-soluble skin lightening agents. The penetrability of the formulation allowed the agents to reach the lower layers of the skin from where the hyperpigmentation originates. Thus, the concentration of the kojic acid and arbutin in highly penetrable novel encapsulated formulation can be reduced to 0.3% and 0.7 %, respectively as against the superficially treatable low penetrable conventional/marketed formulation containing kojic acid and arbutin at concentrations 2% and 5% w/w respectively. In this study, microemulsion based crème gel was successfully fabricated by aqueous titration method. Incorporation of kojic acid and arbutin in microemulsion provided a dramatic improvement in its photostability and penetrability as compared to conventional gel. In-vitro and ex-vivo drug diffusion studies revealed that microemulsion based crème’ gel showed sustained release and sufficient skin retention thus, delivering drugs at an effective concentration as against conventional gel. In-vitro skin irritation by HET CAM test indicated that the microemulsion based crème’ proved the safety of the formulation.

ACKNOWLEDGEMENT: We thank Shree. Vile Parle Kelvani Mandals Management and Principal of Dr. Bhanuben Nanavati College of Pharmacy for providing all the research facilities. Thanks to Sion Hospitals Skin Bank and Dr. Shrikala Acharya for their continuous support by providing human cadaver skin on a timely basis for our ex‐vivo studies.

CONFLICTS OF INTEREST: The authors do not report any conflict of interest.