INTRODUCTION:Herbal drugs play an important role in the healthcare programs. Ancient literature incorporates a remarkable broad definition of medicinal plants and considers all   parts of the plant to be potential source of medicinal substances. The main hindrance in the acceptance of herbal medicines is the lack of documentation and quality control. So it becomes extremely important to make an effort towards standardization of the plant material to be used as medicine 1. The genus Paederia contains 20- 30 species in worldwide generally distributed in Asia, commonly known as skunk vine like shrub, perennial  climbing  herb, in India  it  found  in  Himalayas  from  Dehradun  east  wards  up to an  altitude  of  1800  meter  and  also in  Assam, Bihar, Bengal, Orissa and Andhra Pradesh.

Paederia fotida Linn, a  member of  Rubiacae  is  an  extensive  climber: glabrous or  puberulous 2, 3.  The  local  name is  “Jyrmi Smaiwtung” 4.  It is known as Chinese Flower in English, Gandha prasarini in Hindi, Prasarani in Sanskrit 5.

Paederia foetida is  native  to  both  temperate  and  tropical  Asia,  from  India  to  Japan  and  South  East Asia. It contains bitter taste with having foul smell. P.  foetida  may  grow  high  in to the  trees in a  variety  of  habitats  from  msichammocks  to  xeric  sand  hill  communities, although  it  appears  to  prefer  sunny  flood  plains  and bottom  lands  even  grow  under water,  tree  gaps  and  other  disturbed  areas 6.

Classification, Pharmacognosy and Morphological Characters: Paederia foetida is an extensive, foetid climber. Leaves opposite, ovate or lanceolate, acute or cuspidate, 2.5-3.8 cm long. Surface is glabrous and mostly ovate, green in colour having a characteristic odour indistinct bitter taste. The leaf is distinctly dorsi-ventral with prominent midrib and lamina.

Epidermal trichomes are sparsely seen both on the upper and lower epidermis. Mesophyll composed of single layered palisade cells and 3-4 layered spongy tissue; in margin of the leaf mesophyll replaced by thick walled cells. Trichomes are present on both surfaces elongate to produce uniseriate trichomes. Midribs composed of single layered epidermis covered with cuticle; ground tissue consisting of 2-5 layered of collenchyma towards upper and lower side and rest parenchyma; a large median crescent-shaped vascular bundle consisting usual elements with xylem towards upper side and phloem towards lower side 7.

The inflorescence consists of a terminal or axillary cymose panicle that is extremely variable. It grows from widely branched paniculate over 1m long to rather reduced size, normally 10cm long. The bracts are either leaf-like or small and linear, with few to numerous flowers, often in lax coiled cymes with peduncle that is 2-30mm long 8.The flowers are bisexual, usually 5-merous; indirty pink or lilac or purplish colour (see Figure 1). The corolla lobes are pinkish to whitish on the inside while the throat is dark purple. The sepal is bell-shaped, with 5 normally smooth triangular-lobed with sizes up to 1mm x 0.6mm. 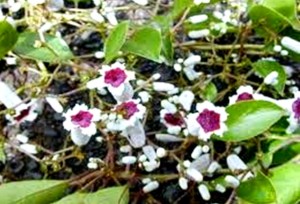 The petal is cylindrical to bell-shaped, and sizes 5-17mm x 2-5mm. The throat and the inside of the long tube are densely hairy with 5 oblong to triangular lobes and sizes between 1-3mm x 1.5-3mm. The margins are wavy and flexed. It has 5 stamens that are inserted in the middle of the tube which includes 2-2.5mm long anthers. The 2-celled and 2 ovuled ovary is inferior with a small disk and 4-15mm long style.

The stigmas joined the style up to 2mm of its length. The 2 stigma branches are thread-like and irregularly twisted.

The sub-spherical fruit is a drupe at 4-6mm in diameter. The fruit walls are thin, dry and brittle. It is crowned by the persistent sepals, shiny pale brown to yellowish-or reddish-brown in color. The 2 semi-orbicular or semi-ellipsoidal kernels are flat on one side and convex or compressed on the other. It is normally slightly smaller than the fruit, without conspicuous wings, black in color and often conspicuously covered with needle-shaped crystals.

The seedling is germinated above the ground, with cotyledons broadly rounded. The veins are prominent while the first pair of leaves form is elliptical and apex is acuminate. Fruit orbicular, wings pale, 1.1 cm across 8. 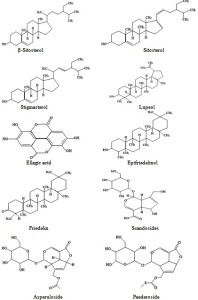 The anti-hepatotoxic potentials of the plant extract against in vivo CCl4-induced hepatic lesions were then evaluated. The administration of the extract significantly decreased the levels of hepatic lipid peroxide (LPO) in the CCl4-intoxicated rat by about 40%. The CCl4-induced increase in the serum enzyme activities such as GPT, GOT, ALP as well as in the bilirubin level were also significantly reduced. The results of the present study suggest that Paederia foetida can ameliorate toxin-mediated hepatocellular injuries probably by inhibiting the oxidative stress 17, 18.

It did not, however, affect adrenal weight and ascorbic acid content significantly, thus ruling out a stimulation of the adrenal-pituitary axis. BMEL antagonised hyposaline-induced haemolysis of human red blood cells and an elevation of rat serum acid phosphatase activity, indicating the presence of a membrane stabilising activity. It also inhibited the elevation of serum orosomucoid levels in rats, suggesting the possibility of the presence of disease-modifying antirheumatic activity 22, 23.

The effect continued up to 6-h period only at 500 mg/kg dose. The plant notably reduced the purging index value in a dose-dependent manner in magnesium sulphate-induced diarrhoea. P. foetida, in general, reduced the gastrointestinal motility with barium sulphate milk both in 15- and 30-min time intervals. The extract significantly decreased the cisplatin-induced gastrointestinal motility at all doses at both time intervals. The extract also enhanced the morphine-induced reduction of motility at 500 mg/kg dose level at both time intervals 30, 31.

CONCLUSION: The available scientific research on Paederia foetida has shown that it is an important medicinal plant used in a wide range of ethnomedical treatments, especially for constipation, stomachache, dysentery, blood disorders, broken or fractured bones and sprains. Although it has not been reported that Paederia foetida might be slightly toxic the plant has been in use for a long period of time without any documented serious adverse effects.

The detailed information presented in this review provides evidence for its various traditional uses. The pharmacological studies that have tested the validity of traditional uses confirmed its anti-inflammatory, antimicrobial and hepatoprotective activites etc. support the use of Paederia foetida to increase renal functions. Reports of the use of this plant for the same ailments in different areas and countries indicate that the plant is of huge biological importance.

Paederia foetida contains different types of secondary compounds that have different structural characteristics with different pharmacological effects. Different compounds such as Phenolic compounds have successfully proven themselves as antioxidants.

The traditional use of the plant for the treatment of dysentery has been supported by the observation that the crude extract inhibited the growth of Shigella dysenteriae, the causative agent of dysentery in humans. The extract of P. foetida could be further explored in the future as a source of useful phytochemicals for the pharmaceutical industry.

ACKNOWLEDGMENT: The authors are thankful to the authorities of Bundelkhand University, Jhansi for providing support to the study and other necessary facility like internet surfing, library and other technical support to write a review article.