ABSTRACT: Bombax ceiba Linn. is one of the important plant species used in various system of medicine. Almost every part of plant is used as medicine and its roots and flowers are used for curing maximum number of ailments. Leaves of the plants are also containing different important secondary metabolites. For the use as safe herbal medicine the plant material (leaves) has to be standardized with the establishment of a consistent biological activity. Pharmacognistic studies includes different Physicochemical parameters like Proximate analysis of plant material such as Fluorescence Analysis, percentage of loss on drying (Moisture content), Total ash, Acid Insoluble ash, Water Soluble ash, used for the standardization, as per guideline of the in Indian Pharmacopoeia. Evaluation of drug in this ways was done for the confirmation of its identity and determination of its quality and purity and detection of nature of adulteration. Sterols present in plant called as Phytosterols. Phytoesterols with the principle advantage that inhibit the absorption of cholesterol and lower serum cholesterol levels was detected by basic techniques like Histochemical Studies, Preliminary Phytochemical analysis and Thin Layer Chromatography in the leaves of Bombax ceiba Linn.

INTRODUCTION: Herbal medicine is one of the oldest forms of medical treatment in human history, and could be considered one of the forerunners of the modern pharmaceutical trade. The herbal products today symbolize safety in contrast to the synthetics that are regarded as unsafe to human and environment. The clinical applications of these natural drugs have helped to revive an interest in higher plants as source of new drug 1.

WHO guidelines include an important norm of standardization of herbal drugs. Standardization is a system that ensures a predefined amount of quantity, quality and therapeutic effect of ingredients in each dose 2. Herbal product cannot be considered scientifically valid if the drug tested has not been authenticated and characterized in order to ensure reproducibility in the manufacturing of the product. Moreover, many dangerous and lethal side effects have recently been reported, including direct toxic effects, allergic reactions, effect from contaminants and interactions with herbal drugs 3. In view of the above, standardization thus is an important step for the establishment of a consistent biological activity, a consistent chemical profile or simply a quality assuarance program for production and manufacturing of an herbal drug 4. Some Physicochemical parameters like Histochemical analysis, Proximate analysis of plant material such as the percentage of loss on drying (Moisture Content), total ash, acid insoluble ash, water soluble ash were determined as per guideline of the Indian Pharmacopoeia.

Plants contain an enormous number of biologically active compounds with various chemical structures. These phytochemicals, often secondary metabolites present in smaller quantities in higher plants include the alkaloids, flavonoids, tannins, terpenoids, sterols, and many others. Out of all these, Sterols present in many plants as an imperative phytoconstituent. Generally, phyto-sterols thought to stabilize plant membranes, with an increase in the sterol / phospholipid ratio leading to membrane rigidification 5. Phytosterols can be found at widely varying concentrations in the fat-soluble fractions of roots, stems, branches, leaves, seeds and blossoms etc. They are constituents of both edible and ornamental plants, including herbs, shrubs and trees 6.

Pharmacognostic studies of plant material for standardization and qualitative analysis for the presence of phytosterol by different tests is the basic aim of the present investigation.

Plant Material: The leaves of Bombax ceiba were collected, identified and authenticated from Flora of Maharashtra State -Vol. I and II 7 and Flora of Nagpur District 8. 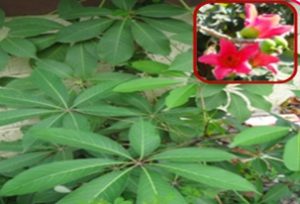 Proximate Analysis: Shade dried leaves of Bombax ceiba ground in a grinder and powder stored in a dry place for further processes.

Total Ash Content: 2g of accurately weighed quantity of powdered plant material (sample) was taken in a tarred silica crucible and incinerated at a temperature 600 ± 15 °C until free from carbon, cooled and weighed. % Total Ash was calculated by the following formulae:

Standard Lab Tests: Two standard methods were done to determine the presence of sterols for the comparative confirmation with field tests 13, 14

Salkowski Test: Salkowski test was done with the maceration of selected plants. 2ml extract taken in a test tube. 2ml Chloroform and 2ml conc. Sulphuric acid was added in it. Brown or red colored ring on the sulphuric acid layer given the confirmatory test 15.

Liebermann Burchard’s Test: Liebermann and Burchurd’s test was done after the extraction and reflux of the plant material. 2ml extract taken in a test tube. 2ml Chloroform, 2ml Aceticanhydride and 2ml conc. Sulphuric acid was added in it. Translucent green color given the confirmatory test 16, 17.

Thin Layer Chromatography: The active extract (Hexane) obtained from the dried leaves of leaves of Bombax ceiba Linn.  and was subjected to thin layer chromatography to find out the Phytosterol contents in it 18, 19. The adsorbent used for preparation of thin layer plate as a stationary phase was Silica Gel G. 15 g powder of Silica Gel G was mixed with 30ml Distilled water. This Silica Gel G suspension was spread with a spreader on thin layer chromatographic glass plates fixed on a stage. The prepared plates were air-dried and activated in an oven at 110 °C for 30 min.

The activated plates then used for the application of samples and standard solutions [β – Sitosterol (M P Bio meditech), in Hexane with capillary tubes. The spots of samples and standard solutions were applied on plate, keeping distance of approximately 1cm. The chromatographic glass chamber was saturated with the moistened filter paper by dipping it in selected solvent system. The applied plate then kept in a mobile phase, Benzene : Ethyl Acetate (5: 1). The developed plate then derivatize with spraying reagent (20% Antimony Trichloride in Chloroform) for the visualization of phytosterol spots. The Rf values of standard spots and sample spots were calculated.

This is so because if any adulteration is present in the plant material mixture, the color so obtained will be different from the pure one, proves the significance of the fluorescence studies. The values of all the Physicochemical determinants viz. Moisture Content, Ash Values etc. are summarized in Table 2. Moisture content examined in the intended plants was not too much so that less prone to microbial contamination and eventually prevent from decomposition. Total Ash Content of Bombax ceiba Linn. (Leaves) was found to be more which shows that these plants contain more carbonates, phosphates, silicates i.e. mineral contents and some inorganic elements.

Histochemical Analysis: The Reddish Brown colored granules was observed in the Palisade and Spongy Tissues, stained with Antimony Trichloride (SbCl3) (Fig. 2). These granules were assumed to be stained steroidal compounds according to the study of Trease & Evans (1986). Thus this study had given a primary confirmation of location of phytosterols in the plant material.

Preliminary Phytochemical Analysis: Salko-wski’s Test and Liebermann Burchard’s Test are the two important test for the detection of sterols from the plant material. Leaves of Bombax ceiba L. showed both the tests positive for the phytosterols (Table 3).

‘+’ indicates the positive test for the presence of Phytosterols.

Thin Layer Chromatography: TLC is also used to support the identity of a compound in a mixture when the Rf of a compound is compared with the Rf of a known compound. Additional tests involve the spraying of phytochemical screening reagents, which cause color changes according to the phytochemicals existing in a plants extract; or by viewing the plate under the UV light 20.

The leaves extract in the present investigation showed different spots, out of them 0.26 Rf value was much similar with that of the Rf value of standard β-Sitosterol which was 0.26 (Table 4). 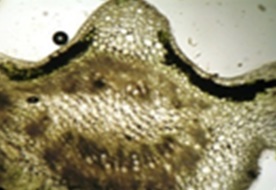 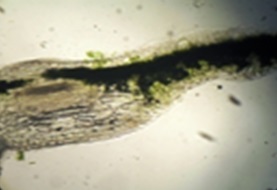 IN GLYCERINE (WING OF LEAF REGION) 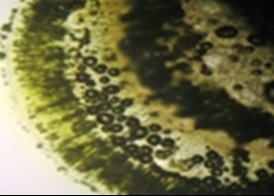 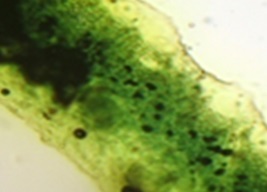 IN SBCl3 (WING OF LEAF REGION)

The brownish colour appear in both β-Sitosterol (Standard) and Bombax ceiba Linn. (Leaves extract) at Rf value 0.26, after derivatization, confirms the presence of phytosterols in the leaves of Bombax ceiba Linn.

CONCLUSION: The information from pharmacognostic study will be helpful to differentiate Bombax ceiba Linn. from the closely related other species and varieties. Proximate analysis can be considered as standardized enough to identify and decide the authenticity of this drug. Qualitative analysis for phytosterols was found to be positive in all the selected parameters for study. The present physicochemical data thus emphasize the knowledge of quality and identity of the plant Bombax ceiba L. (Leaves).

ACKNOWLEDGEMENT: Author is thankful to the Head of the department allow me to work in the laboratory.

P. Anasane* and A. Chaturvedi