ABSTRACT: Gentamicin causes kidney cellular damage by alterations in biological functions. This study evaluated the nephroprotective potential of the ethanolic extract and its fraction originating from Sapindus emarginatus Vahl. (Sapindaceae) bark against the Gentamicin - induced nephrotoxicity in rat. Objective: To evaluate the nephroprotective effect of ethanol extract and its organic solvent fraction of S. emarginatus Vahl. in gentamicin-induced acute renal failure in rats. Materials and Methods: Nephrotoxicity was induced in wistar rats by intraperitoneal administration of gentamicin 100 mg/kg/day for ten days. The treatment was done with silymarin 50 mg/kg, ethanol extract 200 mg/kg/p.o. and its ethyl acetate fractions 100 mg/kg/p.o. bark of S. emarginatus was determined using parameters serum creatinine, urea, uric acid, blood urea nitrogen, albumin, protein, other parameters are kidney weight, body weight, urine volume and histopathology of kidney. Results: It was observed that the ethanol extract and its ethyl acetate fractions bark of S. emarginatus has brought back the altered levels of biochemical markers to the near normal levels in the dose dependent manner. In histopathological study the gentamicin-induced glomerular congestion, peritubular inflammation, tubular desquamation, tubular congestion, interstitial haemorrhage and odema of the kidney cells were found to be reduced in the group receiving the bark extracts of S. emarginatus along with gentamicin. Conclusion: The present study that ethanol and its ethyl acetate fraction possessed nephroprotective activity. The isolated fraction was found to exhibit greater nephroprotective activity than the ethanol extract

INTRODUCTION: Nephrotoxicity can be defined as renal disease or dysfunction that arises as a direct or indirect result of exposure to medicines and industrial or environmental chemicals. Still, aminoglycosides are useful to treat life - threatening infections in human and animals 1. Gentamicin has nephrotoxic potential. Unfortunately, 30% of patients treated with gentamicin for more than 7 days show some signs of nephrotoxicity 2.

It has been reported that Gentamicin - induced nephrotoxicity characterized by direct tubular necrosis that is localized mainly in the proximal tubule is followed by renal failure with an increase plasma creatinine, urea, uric acid and other plasma proteins etc 3. And reactive oxygen species (ROS) generation in kidneys 4, 5, 6.

Approximately, 19 million adults have chronic kidney disease and an estimated 80,000 persons have chronic kidney failure diagnosed annually in India. Kidney disease is the 9th leading cause of death in India 7. According to WHO, about 75 – 80% of the world populations still rely mainly on herbal remedies; because of it is safe and without any side effects etc 8. Sapindus emarginatus Vahl belonging to family Sapindaceae, commonly known as Soap nut tree (Ritha) 9.  Sapindus emarginatus is reported to have cosmetic and medicinal potential in various literatures. In the present context, the in vivo nephroprotective activity of ethanol extract and its ethyl acetate fraction of Sapindus emarginatus Vahl was evaluated in wistar rats.

The plant material is identified and authenticated by the Botanist Dr. Harsha Hegde, Scientist ‘C’ Regional Medical Research Centre, Indian Council of Medical Research, Belgaum. The voucher specimen has been deposited at the same herbaria with accession no: RMRC - 989.

The ethanol extract of dried powder 1 kg. of the bark was prepared by using Soxhlet apparatus for ethanol extraction 10, 11. The extracts a solvent was evaporated in rota evaporator and this extract concentrated on water bath 12. The ethanol extract dried product to give yellowish – brown, sticky mass. The ethanol extract part of was named EESe. This successive extract shows presence of carbohydrate, proteins, amino acids, sterol, triterpenoids, glycosides, saponins, tannins, flavonoids, phenolic, oils and fats etc. phytoconstituents 13.

Gentamicin, Silymarin was obtained from Abbott and Microlabs, India. The kits for all biochemical estimations were purchased from Transasia Biomedicals Ltd., India. The solvents and other chemicals used were of analytical grade.

Wistar rats (150 – 200 gm.) of male sex obtained from Sri Venkateshwara Enterprises, Bangalore were kept in standard environment conditions, fed with rodent diet and with water libitum. Approval from the institutional animal ethical committee for the usage of animals in the experiments was obtained. (Proposal No: 09/Mar-2014).

The acute oral toxicity study was carried out as per the guideline 423 set by Organization for Economic Cooperation and Development received from Committee for the purpose of control and supervision of Experiments on Animals 24.

After collection of blood for biochemical estimation, the rats were sacrificed and the kidney was carefully dissected, cleaned of extraneous tissue, and fixed in 10% formalin for at least 24 hrs. Then the paraffin sections were prepared (automatic tissue processor Autotechnique) and cut into 5 µm. thick sections, using a rotary microtome. The sections were stained with Haematoxylin - Eosin dye and studied for histopathological changes 25.

Results are given as mean ± SEM, (N = 6). Data was analyzed using one – way ANOVA followed by Dunnett’s test. The statistical significance of difference was taken as P < 0.05. The analysis was performed by Prism software.

In the acute toxicity assay it was found that no mortality was observed up to doses of 2000 mg/kg, orally and hence it was considered as safe. Also there were no signs of any toxic reaction found till the end of the study period. 1/10th of the median lethal dose 50 was taken as an effective dose.

The aminoglycosides induce nephrotoxicity in observed 10 - 20% of therapeutic courses. The widespread therapeutic use of the gentamicin is limited because of its nephrotoxic side effect and oxidative damage which can lead to acute renal failure 26, 27, 28.

Gentamicin is one of the effective antibiotics used in the treatment of gram negative bacterial infection. A major complication of the use of these drugs is nephrotoxicity. The pathogenesis of aminoglycosides nephrotoxicity is a two – step process. The first step entails the transportation and accretion of antibiotics in high concentration by renal proximal tubular cells. The second step involves the adverse interaction between these polycationic drugs leading to cellular damage 29, 30, 31. A direct interstitial haemorrhage is also observed during nephrotoxicity. Data from recent studies showed that the cationic proteins and peptides, inhibit the uptake of a nephrotoxic drug, gentamicin, which is highly accumulated in the kidneys. The mechanism underlying gentamicin – induced renal cellular damage by generation of superoxide anion, hydrogen peroxide (H2O2), hydroxyl radicals and reactive oxygen species (ROS) generation in kidneys and finally this has been attributed to its deleterious effect on the kidney 32, 33.

An association between nephrotoxicity and oxidative stress has been confirmed in many experimental models 34, 35, 36. 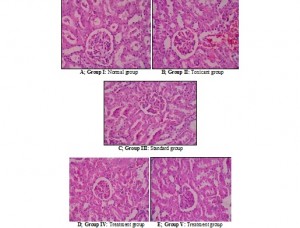 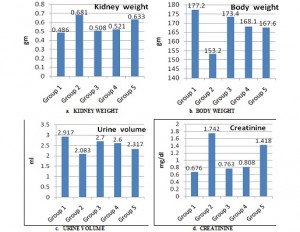 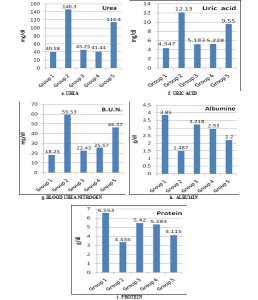 CONCLUSION: This nephroprotective activity of the Sapindus emarginatus Vahl ethanol extracts and ethyl acetate fraction may be due to antioxidant activity which may be due to the presence of flavonoids and phenolic compounds. The results of our study demonstrate the nephroprotective activity of ethanol extract of S. emarginatus Vahl is less effective than ethyl acetate fraction of ethanol extract of S. emarginatus Vahl. The mechanism for its protection against cellular damage may be due to its presence of flavonoids (rutin), tannins and phenolic compounds etc. having good antioxidant activity. All data is justifying the use of this plant for treatment of nephroprotective.  Further clinical investigation is warranted.

ACKNOWLEDGEMENTS: The authors are thankful to K.L.E. University Belgaum and Principal, K.L.E. University’s College of Pharmacy Hubli - 31 (Karnataka) India, for providing the necessary facilities to carry out the work.