ABSTRACT: The present study aimed to understand, phytochemistry and antioxidant property of five members belonging to Apocynaceae, Catharanthus roseus (L) G. Don; Plumeria alba L.; Pentalinon luteum (L) B. F. Hanson & Wunderlin; Rauvolfia tetraphylla L and Nerium oleander L. The preliminary phytochemical analysis was carried out using the methanolic extract for protein, carbohydrate, alkaloids, phenol, tannin flavonoids, and saponin. They were quantified using spectrophotometer using different standards and methods like the Bradford method using BSA as standard for protein, phenol-sulphuric acid method using glucose as standard for carbohydrates, Folin-Ciocalteau method by Sidduraju and Becker for phenol using catechol as standard, tannins using Folin-Ciocalteu method using tannic acid as standard, Zhishen et al., modified method for flavonoids using quercetin as standard. Total alkaloids were estimated using the dry weight method. Antioxidant properties were studied using the ability of the Soxhlet extracts of the plant samples to scavenge the DPPH radicals using Blois method with modifications. The highest concentration for protein was found in Rauvolfia tetraphylla, and the lowest concentration was found in Nerium oleander. The highest concentration of carbohydrate and tannin was found in Catharanthus roseus and the lowest in Nerium oleander. The highest alkaloid, phenol, and flavonoid content were found among in Catharanthus roseus, Plumeria alba and the lowest in Nerium oleander. Nerium oleander exhibited the highest scavenging properties for two of the Soxhlet concentrations out of three (the highest antioxidant activity for 200 µg/mL, 100 µg/mL).

INTRODUCTION: Plants play an essential role in sustaining life on earth. It plays a diverse role like providing timber for construction and infra-structure; it provides valuable medicines to humanity, food for humans and animals, gum, resins, etc.

So, the forest cover has immense aesthetic value, and the forests serve as the lungs for the supply of oxygen and also sustain millions of animals, insects, birds, and other creatures 1.

This study aims to compare some selected members of the family Apocynaceae for their phytochemical compounds and antioxidant properties. Groups of secondary plant metabolites, antioxidant phenolics, and flavonoids are commonly found in various parts of the plants like fruits, leaves, and seeds 2 and they have been shown to provide a fruitful tool to compare the different plants in a family for their taxonomic evaluation.

These plant species are generally grown as an ornamental plant for its beautiful and fragrant flowers, but the extract obtained from the leaves and root are used in the treatment of syphilitic ulcers 3. Pentalinon luteum (L) B. F. Hanson & Wunderlin (Authentication SMPU/RARIMD/BNG 2018-19/1232) is the wild allamanda which is a vine-like shrub which grows up to a height of 1.8 to 2.4 m, and is commonly called as the hammocks vipers' tail is a native plant Caribbean islands, Florida and USA 4.

It is mainly used in the treatment of skin diseases like sores and cuts. Rauvolfia tetraphylla L. (Authentication SMPU/RARIMD/BNG2018-19/ 1232) is a small woody shrub that grows up to 0.6-1.2 m high and is commonly called as the devil pepper. It is a highly medicinal plant that is used for treating insomnia, reducing the level of blood sugar; the root extract is used in the treatment of diarrhea, dysentery, and cholera. Nerium oleander L. (Authentication SMPU/RARIMD/BNG2018-19/1232) is a very large evergreen shrub that grows up to 2-6 m and is highly poisonous. It is widespread in its distribution and found all over the world, including China, India, Japan, and the Mediterranean to Persia. It is highly poisonous but used for skin inflammations and chronic joint pains and cramps 5.

Plants are rich in biologically active compounds like antioxidants and phytochemicals, and they play an essential role in the treatment of diseases 2. Many diseases like cancer, inflammation, lesions, degenerative diseases are caused due to excess of Reactive Oxygen Species (ROS) in the cellular body. All aerobic organisms have an inbuilt mechanism to neutralize this ROS but often insufficient as there is an increase in the rate of pollution in the environment and our changing food habits, which consist more of junk foods. Even though there are a large amount of synthetic antioxidants that are used in the food processing technologies, most of them have side effects that increase the demand for naturally occurring antioxidants in plants 6. Secondary metabolites like phenol and flavonoids play an important in plant growth as well as reproduction. These compounds also have antioxidant properties as well as anti-cancer properties 7.

Plant Sample: The plant samples were collected from Christ (Deemed to be University) Main Campus, Bangalore, Karnataka, and was identified and authenticated from Regional Ayurveda Research Institute for Metabolic Disorders by Dr. V Rama Rao (Authentication SMPU/RARIMD/ BNG2018-19/1232). The leaves were taken separately, washed, and shade dried for one week. They were ground into a fine powder using a mechanical blender and sieved and stored in an airtight container.

Preparation of Plant Extract: 2 g of the sample was extracted in a Soxhlet apparatus using 150ml of methanol as the solvent, and the Soxhlet was run overnight until the sample loaded became colorless. After the Soxhlet extraction is over, extracts were put inside rotor evaporator until it gave the solidified residues. The sample extracts were collected, weighed and stored in a freezer.

Protein: One mL of sample was taken to which two drops of 0.2% of ninhydrin solution was added and was kept in a boiling water bath till a purple color was formed 1.

Molisch's Test: 2 ml of sample was taken in a test tube to which 2 ml of Molisch’s reagent was added and shaken. After which drop by drop, Concentrated H2SO4 was added through the sides until there was the appearance of a violet ring confirm the presence of carbohydrate 1.

Saponins: 0.5 g of the sample was taken in a boiling test tube to which 3 ml of water was taken and continuously shaken for 2-3 min. Positive results showed foam production for which is persistent 8.

Flavonoids: 1 ml of plant extract was treated with sodium hydroxide solution. The positive result showed the presence of an intense yellow color and became colorless after the addition of dilute acid 8.

Protein Estimation Using Bradford: Modified Bradford's method was used.0.5 g of leaf sample was ground using motor and pestle, and it was centrifuged at 10000 rpm for 10 min 4 ºC. 0.5 ml of the supernatant was taken and made up to 5 mL, and 5 mL of Bradford's reagent was added to this and incubated for 10 min until the formation of a blue color. The absorbance was measured at 595 nm by plotting against a standard graph made up of BSA as standard. The estimation was carried out in triplicates, and the Protein content was expressed in milligram/gram of dried sample of the leaves 9.

Carbohydrate Estimation: Carbohydrate was estimated using a slightly modified sulphuric acid phenol method. 100 mg of the plant sample was taken in a boiling tube, and it was hydrolyzed in 5 mL of 2.5 N HCl for 3 h and is allowed to cool at room temperature. After which it is neutralized with solid sodium carbonate until the brisk effervescence is ceased. Then this was made up to 50 mL using distilled water and centrifuge. 1 mL of the supernatant was taken to which 1 mL of phenol was added and 5 ml of sulphuric acid. 10 min it was shaken continuously and kept for incubation for 20 min. The absorbance was measured at 490 nm using glucose as standard. The estimation was carried out in triplicates, and the carbohydrate content was expressed in milligram/gram of dried sample of the leaves.

Total Alkaloid Estimation: 1g of powdered leaf sample was taken and 40 mL of 20% acetic acid and was allowed to stand for 4 h. The mixture after filtration was reduced to 1/4th of its volume by placing it in a water bath. To this ammonium hydroxide was added drop-wise inside a fume hood. The solution was made to stand for 2-3 h until all the filtrate settles. The precipitate was filtered, dried, and weighed. The percentage of total alkaloid content was calculated as 2.

Estimation of Total Phenol: Phenol in the Soxhlet sample was estimated using a modified Folin-Ciocaltaeu assay. 200 μl of the sample (10mg/ml) was taken in a test tube and made up to 1 ml with distilled water to which 1 ml of Folin Ciocalteu's reagent was added and incubated for 6 min in room temperature and 1.25 mL of 7% NaCO3 and incubate in the dark for 90 min. The absorbance was measured at 638 nm by plotting against a standard graph made up of catechol as standard. The estimation was carried out in triplicates, and the Phenol content was expressed in mg/g of dried sample of the leaves 2.

Estimation of Total Flavonoids: 0.5mL of Soxhlet sample was taken in a test tube. 1.5 mL of ethanol was added and mixed thoroughly. To this 0.1 mL of 10%, aluminum nitrate solution was added and to which 0.1 mL of 1 M potassium acetate was added, and 2 mL of water was added. Blank was prepared similarly.

Standard was prepared using a different concentration of quercetin, and the absorbance was measured at 415 nm using a spectrophotometer. The estimation was carried out in triplicates, and the flavonoid content was expressed in milligram/gram of dried sample of the leaves 2, 11.

Estimation of Tannin: 0.5 mL of the soxhlet extract is taken in a test tube and make it up to 1 mL using distilled water. To this add 0.5 mL of Folin Ciocalteu's reagent and add 2.5 mL of Sodium Carbonate (20 %) mix thoroughly and incubate for 40 min. Read the absorbance at 725 nm using the spectrophotometer. Tannic acid prepared at different concentrations from the stalk solution was used as the standard. The estimation was carried out in triplicates, and the tannin content was expressed in milligram/gram of dried sample of the leaves 2, 12.

In-vitro Antioxidant Activity using DPPH: Modified Blois method was used to estimate the antioxidant activity. 0.2 mmol/L solution of DPPH in methanol was prepared, and 500 µL of this solution was added to different concentrations of the extract (50-150 µg/mL). This solution was vigorously shaken and allowed to stand in the dark for 30 min. The blank was prepared with all the reagents except the sample. Absorbance was measured at 517 nm using a spectrophotometer 10, 13. 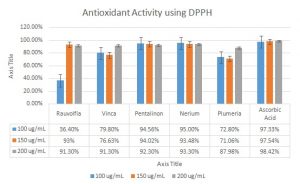 CONCLUSION: The phytochemical analysis carried out concluded that the selected five members of Apocynaceae are rich in various phyto-chemicals and antioxidant scavenging properties. Hence, these plants which were often used for ornamental purposes can be exploited in metabolic engineering for the production of secondary metabolites.

ACKNOWLEDGEMENT: We are thankful to the Vice-chancellor and Management of CHRIST (Deemed to be University), Bangalore for their encouragement to carry out this study.