PHYTOCHEMICAL SCREENING AND BIOLOGICAL STUDIES ON THE LEAVES OF TINOSPORA CORDIFOLIA

PHYTOCHEMICAL SCREENING AND BIOLOGICAL STUDIES ON THE LEAVES OF TINOSPORA CORDIFOLIA

ABSTRACT: Helminthiasis is also known as worm infection and a endoparasitic disease of humans and other animals in which a part of a body is infected with parasitic worms. Tinospora cordifolia is a well known medicinal plant and widely used in folk medicine ayurvedic system. The objective of this work is to carry out phytochemical screening and in vitro anthelmintic activity of methanolic, petroleum ether and ethylene glycol extracts of leaves of Tinospora cordifolia (Menispermaceae) against Indian earthworm, Pheretima posthuma. Various concentrations (2.5, 5, 10, 20 mg/ml) of the extracts were tested, which involved determination of time of paralysis and time of death of the worms using Albendazole (10 mg/ml) as standard drug and normal saline as control. The methanolic extract exhibited a maximum anthelmintic activity than the other two extracts. The extract showed anthelmintic activity in dose dependant manner giving shortest time of paralysis (P) and death (D) with 20mg/ml concentration and caused paralysis in 4 min and death in 10 min respectively. The Preliminary phytochemical analysis indicated the presence of various phytoconstituents in the extract of which alkaloids, glycosides, triterpenes and steroids might have contributed for the potent anthelmintic activity. From the above study, it significantly shown the antihelimenthic activity and provides scientific rationale for the traditional use of Tinospora cordifolia for Helimenthiasis. The future scope of Tinospora cordifolia provides economic, safe and efficacy of antihelminthic drug contributing to the society.

INTRODUCTION: Helminthiasis is a highly prevalent disease worldwide that is caused by species platy helminthes (flat worms) and nematoda (round worms) 1. Helminthes infections are commonly found in community and being recognized as cause of much acute as well as chronic illness among the various human beings as well as cattle’s 2.

The disease may transmitted by fecal-oral route. According to the WHO, approximately 2 billion people are affected by helminthic infections worldwide 3. Children are vulnerable to complications like malnutrition 4. Chemical control of helminthes coupled with improved management has been an important worm control strategy throughout the world 5.

However, the high cost of modern anthelmintics has limited the effective control of these parasites 6. In some cases widespread intensive use of sometimes low quality anthelmintics has led to development of resistance and hence a reduction in the usefulness of available anthelmintics 7, 8. However, increasing problems of development of resistance in helminthes against anthelmintics have led to the proposal of screening medicinal plants for their anthelmintic activity 9. A number of medicinal plants have been used to treat parasitic infections in man and animals 10. Antihelminthics are those agents that expel parasitic worms (helminthes) from the body, by either stunning or killing them11, 12.

Tinospora cordifolia (Menispermaceae) is an herbaceous vine, indigenous to the tropical areas of India, Myanmar and Sri Lanka 13. This plant is a glabrous climbing shrub found throughout India, typically growing in deciduous and dry forests. Many investigators have evaluated various pharmacological properties of T. cordifolia, it has been shown to possess antiallergic 14, anti-inflammatory 15, antioxidant activities 16, immuno-modulatory 16, hepatoprotective 17, antipyretic 17, antidiabetic 17, antihyperlipidimic properties 18, urinary diseases, syphilis, skin diseases, and bronchitis. T. cordifolia has been known to promote longevity and increase the body’s resistance against various diseases 16. In Ayurveda, T. cordifolia is used as a rasayana, which in Sanskrit implies circulation of nutrient. The ancient Indian physician, Charaka described rasayana as antiaging, increasing the life span, promoting intelligence, improving memory and freedom from diseases, indicating immunostimulant effect. T. cordifolia has been traditionally used as an anthelminthic agent. However, anthelminthic activity of T. cordifolia stem extract has not so far been scientifically proved and reported 17.

To justify the traditional claims of T. cordifolia, we made an efficient attempt to assess the anthelminthic activity of methanol, petroleum ether and ethylene glycol extracts of T. cordifolia on Pheritima posthum 11.

Collection of Plant Material: The leaves of plant Tinospora coridifolia was collected from Bobbili forest, Vizianagaram district, Andhra Pradesh, India and was authenticated (Voucher no. 7066_379).

Extract Preparation: The leaves were separated and washed thoroughly with sufficient water. It was dried under shade for two weeks and powdered in a whely mill the powdered material was subjected to maceration (cold extraction) 19. The air dried powdered material (180 mg) of leaves of plant was extracted with petroleum ether, methanol, ethylene glycol by cold extraction kept for several hrs for about 7 days of occasional shaking as represented in Table 1. The extract was concentrated under vacuum in rotary evaporator, dried completely and weighed.

Drug and Chemicals: Albendazole was obtained as purchased from market formulation of Glaxo Smithkline for antihelminthic activity 24.

Sample and Standard Preparation: Test samples for in-vitro antihelminthic were prepared by dissolving and suspending 0.5 gms of each petroleum ether, ethylene glycol and methanolic extract of Tinospora cordifolia in 10 ml of distilled water to obtain a stock solution of 50mg/ml. From this stock solution, different working dilutions were prepared to get concentration range of 2.5, 5, 10 and 20 mg/ml 19. Albendazole strength of 10 mg/ml was prepared used as standard. Normal saline is used as control.

Evaluation of Antihelmentic Activity: The antihelimenthic activity petroleum ether, ethylene glycol and methanolic extract of Tinospora cordifolia were evaluated as per the method 19, 22, 25. Five groups of approximately equal size earthworms consisting of three earthworms in each group were used for the present study. Group I served as control and treated with normal saline. Group II served as standard and treated with albendazole. Group III, IV and V were treated with 2.5, 5, 10, 20 mg/ml of extracts of Tinospora cordifolia respectively. All the observations were made from the time taken to paralysis and death of individual worms. Paralysis was stated when the worms did not revive in normal saline. Death was concluded when the worms lost their mortality followed with fading away of their body colour. 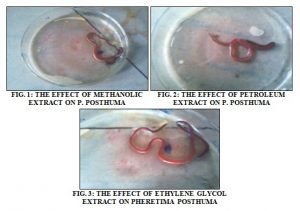 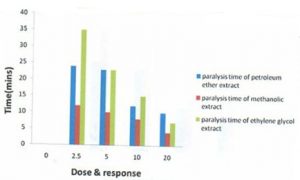 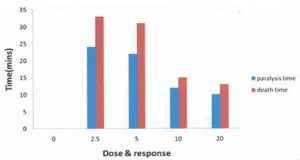 DISCUSSION: Phytochemical analysis of the crude extracts revealed presence of alkaloids, glycosides, steroids are the important chemical constituents were shown to produce anthelmintic activities. The predominant effect of anthelmintic drugs on the worm is to cause a flaccid paralysis that result in expulsion of the worm by peristalsis. Albendazole act by blocking glucose uptake in larval and adult stages of susceptible parasites, and also depleting their glycogen reserves, thus decreasing ATP formation 26, 27, 28, 29, 30.

In the present study, all the extracts i.e. petroleum ether, methanol, ethylene glycol extracts of Tinospora cordifolia showed dose dependant and significant activity compared with the standard drug albendazole. Amongst all the extracts, methanolic extract showed better activity at higher concentration. From the above observation, the data revealed that methanolic extracts Tinospora cordifolia showed significant anthelmintic activity and found to be more effective in promoting paralysis as well as in causing death of the worms when compared with standard drug Albendazole at the same concentrations.

CONCLUSION: Leaf extracts of Tinospora cordifolia showed the anthelmintic activity against the earth worm, Pheritima prosthuma used in the study. The active constituents responsible for anthelmintic activity are present in the methanolic extracts of the plant. The methanolic extract has more efficient activity when compared with petroleum ether and ethylene glycol extracts at the concentration 2.5, 5, 10 and 25 mg/ml. the antihelminthic activity was found to be increased with dose (shortest time of paralysis and death was observed at 10 mg/ml and activity was comparable to the well known antihelimenthic agent Albendazole.

ACKNOWLEDGEMENT: The authors of this paper are very thankful to the management and principal of Sri Venkateswara College of Pharmacy, Srikakulam for guidance and providing the research facilities.