INTRODUCTION: Diabetes Mellitus is a serious, complex metabolic disorder of multiple etiologies, characterized by chronic hyperglycemia with disturbances of carbohydrate, fat and protein metabolism resulting from defects in insulin secretion (β-cell dysfunction), insulin action (insulin resistance) or both 1. It is of particular concern since the disease incidence is expected to increase worldwide by more than 100% between 2000 and 2030 2. Hyperglycaemia may perturb cellular antioxidant defense systems and damage cells. Free radicals are formed disproportionately in diabetes by glucose oxidation, non-enzymatic glycation of proteins, and the subsequent oxidative degradation of glycated proteins 3, which occurs in various tissues. This process leads to long-term damage, dysfunction, and failure of various organs, especially the eyes, kidneys, nerves, heart, and blood vessels, and creates a huge economic burden related to the management of diabetic complications 4.

Glycoproteins are carbohydrate linked protein macromolecules found in the cell surface, which form the principal component of animal cells. Hexose, hexosamine, fucose and sialic acid are the basic components of the glycoproteins. They play an important role in membrane transport, cell differentiation and recognition, the adhesion of macromolecules to the cell surface, and the secretion and absorption of macromolecules. Impaired metabolism of glycoproteins plays a major role in the pathogenesis of diabetes mellitus 5. In recent times, many traditionally important medicinal plant phytochemicals have been tested for their efficacy against impaired glycoprotein levels in diabetes 6.

Streptozotocin, a monofunctional nitrosourea derivative, is one of the most commonly used substances to induce diabetes in experimental animals 7. Evidences suggest that the diabetogenic capacity of streptozotocin may depend on its ability to damage β-cell and induce oxidative stress 8. In the diabetic state, glucose is utilized by the insulin independent pathways leading to the synthesis of glycoproteins, and even a mild deficiency of insulin influences the thickening of the basement membrane. At the cell surface or inside the cells, the glyco-components such as fucose and sialic acid form specific structures, called glycanic chains covalently linked to lipids or proteins. An important in the metabolism of glycoproteins could be related to the deposition of these materials in the basal membrane of pancreatic cells 9.

Diosmin was first isolated in 1925 from Scrophularia nodosa. Today, it can be manufactured by extracting hesperidin from citrus rinds, followed by conversion of hesperidin to diosmin 10. Diosmin possesses antioxidant 11 and blood lipid lowering 12 activities. It enhances venous tone and microcirculation and protects capillaries 13, mainly by reducing systemic oxidative stress 14. In our previous studies, we reported the effect of diosmin on rate-limiting enzymes of glycolysis, HMP shunt and gluconeogenesis in the liver and circulation of diabetic rats15. To our knowledge, there are no available reports on the effect of this flavonoid on glycoprotein levels in diabetic rats. Hence, the present study was carried out to determine the effect of diosmin on plasma and tissue glycoproteins in STZ-NA-induced diabetic rats.

Animals: Male albino Wistar rats, weighing 180–220 g, bred in the Central Animal House, Rajah Muthiah Medical College, Annamalai University, were obtained and housed in polypropylene cages in a pathogen free environment at an ambient temperature of 28±2°C and 45–55% relative humidity with 12 h each of dark and light cycle. Rats were fed pellet diet (Hindustan Lever Ltd., India) and water ad libitum. The animals were maintained in accordance with the guidelines of the National Institute of Nutrition, Indian Council of Medical Research, Hyderabad, India and approved by the Institutional Animal Ethical Committee, Annamalai University (Reg. No. 160/1999/CPCSEA; vide No. 566, /2008).

Chemicals: Diosmin and streptozotocin were purchased from Sigma Chemical Company, St Louis, MO, USA and all other chemicals used were of analytical grade obtained from E. Merck or Himedia, Mumbai, India.

Induction of diabetes: Non-insulin dependent DM was induced in over night fasted experimental groups by a single intraperitoneal (i. p.) injection of freshly prepared STZ (45 mg/kg b. w.) dissolved in 0.1 mol/l citrate buffer (pH 4.5) 15 min after the i. p. administration of NA (110 mg/kg b. w.). The animals were allowed to drink 20% glucose solution overnight to overcome drug-induced hypoglycemia. Control rats were injected with the same volume of isotonic saline. After 72 h, plasma glucose was determined and those rats with fasting glucose levels greater than 250 mg/dL were served as diabetic rats and used in the present study.

Experimental design: The animals were randomly divided into four groups of six animals in each group (12 diabetic surviving and 12 normal).Diosmin was dissolved in vehicle solution of 0.6% dimethylsulfoxide (DMSO) and diosmin (100 mg/kg b. w) were administered orally using an intragastric tube for a period of 45 days 15.

Determination of glycoprotein components: For the estimation of glycoprotein components, the tissues were defatted by the method of Folch et al 16. And the defatted tissues were treated with 0.05 M H2SO4 and hydrolysed at 80◦C and aliquot was used for sialic acid estimation. To the remaining solution, 0.1 M NaOH was added. The aliquots were used for fucose, hexose, and hexosamine estimation.

Estimation of hexose: Protein-bound hexoses were estimated by the method of Dubois and Gilles 17. To 0.1 ml of plasma or defatted tissue sample, 5.0 ml of 95% ethanol was added, mixed and then centrifuged. The precipitate was dissolved in 1.0 ml of 0.1 N NaOH. Subsequently, 1.0 ml of distilled water and 1.0 ml of standards (20 - 100μg) were set up along with the test. To all the tubes, 8.5 ml of orcinol-sulphuric acid reagent was added and kept in a water bath for exactly 15 min at 90°C. The tubes were cooled in tap water and the color developed was read at 540 nm against a blank.

Estimation of hexosamine: Hexosamine was estimated by the method of Wagner18. Briefly, the reaction mixture contained, 0.5 ml plasma/1.0 ml aliquot, 2.5 ml of 3 M HCl and boiled over 6 h and neutralized with 6 M NaOH. To 0.8 ml of neutralized sample added 0.6 ml of acetyl acetone reagent and boiled for 30 min. The mixture was treated with 2.0 ml of Ehrlich’s reagent. The absorbance was read at 540 nm.

Estimation of sialic acid: Sialic acid was determined by the method of Warren19. In brief, 0.5 ml of aliquot/plasma was treated with 0.5 ml of water, 0.25 ml of periodic acid and incubated at 37◦C for 30 min. To the reaction mixture added 0.2 ml of sodium meta arsenate and 2.0 ml of thiobarbituric acid were added and heated for 6 min and added 5.0 ml of acidified butanol. The absorbance was read at 540 nm.

Estimation of fucose: Fucose was estimated by the method of Winzler20. Briefly, 1.0 ml of precipitated glycoprotein from platelet membrane and 1.0 ml of processed serum were dissolved in 1 ml of 0.1M NaOH and placed in an ice-bath and 4.5 ml of cold H2SO4 was added and mixed well. The tubes were heated in a boiling water bath for 3min and cooled and then 0.1 ml of 3% cysteine was added and mixed immediately. The tubes were allowed to stand at room temperature for 60-90 min. The absorbance of the solution at 396 and 430nm was measured in a spectrophotometer and the difference in the absorbance was taken for the calculation.

Statistical analysis: All data were expressed as mean ± SD for six rats in each group. The statistical analysis was done by one-way analysis of variance (ANOVA) followed by Duncan’s Multiple Range Test (DMRT) using SPSS (Statistical Program for Social Sciences, SPSS Corporation, Chicago, IL) version 12.0 for Windows, p<0.05 were considered as significant and included in the study 21.

Effect of diosmin on plasma glucose and insulin levels: Fig. 1 shows the levels of plasma glucose and plasma insulin of different experimental groups. The diabetic control rats showed a significant increase in the level of blood glucose with significant decrease in the level of plasma insulin. Oral administration of diosmin to diabetic rats significantly reversed the above biochemical changes. In our previous study, we have reported that diosmin at 100 mg/kg body weight showed better effect than 25 and 50 mg/kg body weight, therefore the 100 mg/kg body weight was used in this study. 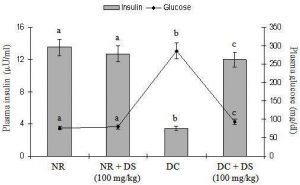 FIG. 1: EFFECT OF DIOSMIN ON PLASMA INSULIN AND GLUCOSE LEVELS IN CONTROL AND DIABETIC RATS

Each value is mean ± S.D. for 6 rats in each group. a- c. In each column, means with different superscript letter differ significantly at p<0.05 (DMRT)

Each value is mean ± S.D. for 6 rats in each group. a-c. In each column, means with different superscript letter differ significantly at p<0.05 (DMRT)

Each value is mean ± S.D. for 6 rats in each group. a-c. In each column, means with different superscript letter differ significantly at p<0.05 (DMRT)

The objective of all diabetes treatment and management is to maintain an adequate blood glucose concentration. Four major classes of oral hypoglycemic agents have been used extensively 22. Each class of drug works on different mechanisms of actions, including stimulation of insulin secretion, reduction of hepatic gluconeogenesis, increase in insulin receptor sensitivity and delay of digestion and absorption of carbohydrate, respectively. Unfortunately, these agents could produce severe hypoglycemia, weight gain or gastrointestinal disturbances.

Therefore, it is necessary to look for new solutions to manage this health problem. The search for newer antidiabetic agents represents a challenge to the medical profession. India is a country with a vast reserve of natural resources and a rich history of traditional medicine23. Naturally occurring phytochemicals with antidiabetic activities are relatively nontoxic, inexpensive and available in an ingestive form. Therefore, they are commonly used to prevent morbidity and mortality from chronic diseases in countries where low or middle-income populations24.

Beta-cell defect and insulin resistance are essential features of non-insulin-dependent diabetes mellitus, and both features are the focus of intensive investigation. In this context, new oral antidiabetic drug diosmin present(s) interesting therapeutic properties. In the present study, we estimated the effect of diosmin on glycoprotein metabolism in STZ-NA-induced diabetic rats. Glycation is a nonenzymatic reaction of glucose and other saccharide derivatives with proteins, nucleotides and lipids 25. Non-enzymatic glycation (Maillard reaction) is a complex series of reactions between reducing sugars and amino groups of proteins, which leads to browning, fluorescence and cross-linking of the proteins.

Several workers have suggested that elevated levels of plasma glycoproteins in diabetic rats could be a consequence of abnormal carbohydrate metabolism. Insulin deficiency and high levels of plasma glucose in diabetic condition may result in an increased synthesis of glycoproteins. The requirement of insulin for the biosynthesis of the carbohydrate moiety of mucoproteins from glucose is thus evident. It has been reported that hyperglycemia leads to increased synthesis of glycoproteins and glycosylated proteins due to the fact that excess glucose is redirected to insulin dependent pathway such as synthesis of glucosamine from glucose 26. Hexosamines are amino sugars created by adding an amine group to a hexose. The level of hexosamine, increased significantly in the plasma, liver and kidney of diabetic rats, which may be due to insulin deficiency. In diabetic rats treated with diosmin significantly lowered hexosamine, which might be due to increased secretion of insulin.

Fucose is a member of a group of eight essential sugars that the body requires for the optimal functioning of cell-to-cell communication and its metabolism appear to be altered in various diseases such as diabetes mellitus 27. A rise in fucose levels could be due to increased glycosylation in the diabetic state. Treatment with diosmin had restored fucose level to near normal, which could be due to improved glycaemic status.

CONCLUSION: This study showed that diosmin reversed the abnormalities in the levels of glycoprotein components. Diosmin may have beneficial effects in diabetes mellitus, by the enhancement of insulin action, as evident by the increased level of insulin in diabetic rats treated with diosmin, which may be responsible for the reversal of glycoprotein changes. Our results are also in line with the previous report.