ABSTRACT: Indian literature relating to the spectrum of infections in maintenance hemodialysis patients has not been extensively published. The purpose of this study was to carry out surveillance of infections in this population and to determine the clinical patterns and outcomes of infections and also to assess the prescribed antibiotic therapy. This was a prospective observational study carried out in the dialysis unit of the nephrology department of a tertiary care teaching hospital. The sample of the study comprised of 30 patients who were receiving maintenance hemodialysis and presented with infections. Escherichia coli was the commonly detected gram-negative pathogen in culture and sensitivity tests. Whereas the most commonly isolated gram-positive bacteria were streptococcus pneumonia and methicillin-resistant staphylococcus species which were sensitive to vancomycin. Respiratory system (47.2%) followed by the urinary system (27.3%) were most commonly affected. The most common outcome of infections was a cure (57%). Clarithro-mycin and ofloxacin-ornidazole were found to be inappropriately dose adjusted. Amoxicillin-clavulanate, cefixime, ticarcillin-clavulanic acid, levofloxacin, piperacillin-tazobactam, mero-penem and imipenem-cilastatin were inappropriately adjusted for dosing frequency. This study reveals that the prevalence of infections is quite high in tertiary care hospitals despite safe practices. Antimicrobial stewardship or continuing education related interventions are needed to optimize the safe and appropriate use of antibiotics.

INTRODUCTION: End-stage renal disease patients who are maintained on hemodialysis are susceptible to various infections owing to their immunosuppressive state as well as the complexity of the health care they receives 1.

These patients are at a high risk of developing infections because of frequent disruption of natural barriers, the introduction of foreign bodies in the bloodstream and uremic dysfunction of the immune system 2.

Acute infections also contribute substantially to the high rates of hospitalization and mortality in this population 3. The annual mortality rates being 10 times more for pneumonia and 100 times more in the case of sepsis when compared with the general population 4. Bacterial infections and sepsis are thus very common in chronic renal failure patients and is the second leading cause of death following cardiovascular disease 5. Such infections lead to a significant increase in the utilization of healthcare resources and related costs. In addition, antibiotic use may be increased in the hemodialysis setting leading to the emergence of multidrug-resistant organisms as a consequence of inappropriate antibiotic use. For the above reasons routine surveillance of hemodialysis related infections is necessary, which is indeed being carried out in many countries including the US 6. However, there is no extensive data regarding the incidence of hemodialysis associated infectious complications in India. Therefore this study aims to present the results of surveillance of hemodialysis associated infections carried out in a dialysis unit of a tertiary care teaching hospital, which can help to improve the measures of infection control and also to prevent the emergence of bacterial resistance.

Study Design: This study bearing IEC no. 2017/19/007 was conducted only after receiving approval from the Institutional Review Board of Owaisi Hospital and Research Centre, Hyderabad. This was a prospective observational study carried out in both inpatients and outpatients presenting to the dialysis unit of the nephrology department during the time span of 6 months (December 2017 to May 2018).

Patient Recruitment and Follow-up: Eligible participants were invited to participate and written consent obtained. Eligibility criteria were patients who were above 18 years of age, patients on maintenance hemodialysis who have developed infections or were on antibiotics and those willing to participate in the study.  Patients receiving short term dialysis were excluded. Every patient was evaluated by nurses and medical staff during each dialysis session for the presence of bloodstream infection. All consenting participants were followed until the end of the 6 month study period.

Data Collection: Patient data such as age, gender, underlying diseases, comorbidities, cause of renal failure, length of time on dialysis, vascular access type and history of infections were collected. Relevant laboratory values such as WBC count, CRP level, ESR were collected. Data regarding the duration of hospital stay, empirical treatment given and the outcome of treatment was also collected. For each patient receiving antibiotics the indication, strength of antibiotic, dosage regimen, the duration of treatment and culture and antibiotic sensitivity (C/S) reports were collected. All the above-mentioned data was collected in data collection forms specially designed for the study.

Analysis of Data: The results were expressed as categorical measurements and presented as numbers, percentage, mean and standard deviation. The data was entered on MS Excel spreadsheets and analyzed for results.

Patient Demographics: A total of 110 patients were dialyzed each month out of which 30 patients (27%) developed infections that comprised our sample. 36 infectious episodes were identified.17 patients (57%) were from the inpatient units and 13 patients (43.3%) were from the outpatient unit. Their mean age was 49 ± 18 years (median 51.5; range 25-82 years). The indications for hemodialysis were: diabetic nephropathy (33.3%), hypertensive nephropathy (43.3%), familial kidney disease (3.3%), glomerulonephritis (10%) and others (10%). 57% of patients had an A/V fistula, 33% had a temporary catheter and 10% had a permanent catheter (Table 1 shows characteristics of patients with infections). 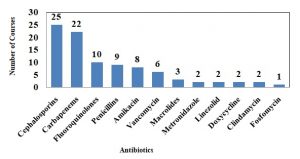 FIG. 1: TYPES OF ANTIBIOTICS AND NUMBER OF COURSES ADMINISTERED

Levofloxacin, piperacillin-tazobactam, meropenem and imipenem-cilastatin were also found to be inappropriately adjusted for dosing frequency.

DISCUSSION: To the best of our knowledge this is among the very few studies to observe types of infections and patterns of antibiotics prescribed to patients receiving maintenance hemodialysis in India. As hemodialysis patients are at risk of infections because of their immuno-compromised state, a requirement for vascular access for prolonged periods and repeated opportunities for cross-transmission of pathogens from person to person or via contaminated devices, equipment and supplies there lies a need for routine surveillance of infections in this population 7.

In our study out of 110 patients attending the dialysis unit 30 (27%) patients developed infections. Most patients were treated by A/V fistula (57%) and this practice coincides with the recommendations of the National Kidney Foundation Guidelines 8. None of the patients had an A/V graft as a vascular access site. The highest number of infections was detected in the age group of 50-69 years.

Among the study participants the most common co-morbidity was hypertension (86.6%) a finding similar to other studies such as Gilbert Abou Dagher et al., Fysaraki et al., 9 and dissimilar to the study carried out by Al- Solaiman Y et al., 10 in which diabetes was found to be more prevalent. And also hypertensive nephropathy was found to be the cause of ESRD in the majority of patients followed by diabetic nephropathy. 63% of males developed infections and this finding is similar to other studies such as Katrina Hui et al., Gilbert Abou Dagher et al., and Rojas L et al. 11

A number of gram-negative pathogens were detected in cultures and no multi-drug resistant organisms were isolated. In most of the cultures Escherichia coli was the causative organism for infections and this finding coincides with the previously published studies 12, 13. Klebsiella pneumonia was the next commonly detected gram-negative species. The most common gram-positive bacteria isolated were streptococcus pneumonia and methicillin-resistant staphylococcus species which were sensitive to vancomycin.

Respiratory and urinary systems were frequently affected by organ systems. Lower respiratory tract infections were the highest, which is another similar observation of this study with that of Gilbert Abou Dagher et al. After LRTIs the urinary tract infections, intra-abdominal infections, cellulitis, central line sepsis and unknown type of infections were more frequently detected. The least commonly detected infection was septic arthritis which was seen only in 1 patient. Many of the pathogens detected were found to be sensitive to extended-spectrum antibiotics such as carba-penems, cephalosporins, broad-spectrum penicillins and fluoroquinolones. Hence, these were the most commonly prescribed antibiotics. The most common outcome of infection was a cure. Prescription of antibiotics without performing cultures resulted in hospitalizations and re-hospitalizations. Infections requiring hospitalizations were lower respiratory tract infections and those of the urinary tract. Out of 4 deaths sepsis was a cause of death in 2 patients (6.6%) who presented with >2 SIRS criteria.

Unlike the studies carried out by Zvonar R et al., and Green K et al., we found vancomycin to be appropriately prescribed 14, 15. Piperacillin-tazo-bactam, meropenem, imipenem and amoxicillin-clavulanate were found to be inappropriately dose adjusted in our study whereas they were found to be unadjusted for dose in other studies 16, 17, 18. We identified that the dosing interval for amoxicillin-clavulanate and meropenem was inappropriate, further pointing out one more similarity of ours with that of an Australian study carried out by Katrina Hui et al.

Our study has the following limitations: Anti-biogram couldn’t be ordered for a few patients owing to financial constraints. Medication non- adherence to the prescribed antibiotic therapy cannot be ruled out as a significant factor that might have led to hospitalizations and re-hospitalizations.

CONCLUSION: Our study reveals that the prevalence of infections is quite high in tertiary care hospitals despite safe practices. Continual exposure and inappropriate prescription of antibiotics contribute to increased antibiotic resistance in the dialysis population. This study suggests that surveillance of local microbiology is of utmost importance in guiding empirical antibiotic therapy and also in the development of vaccination protocols specific to the hemodialysis population.

Antimicrobial stewardship or continuing education related interventions are needed to optimize the safe use of antibiotics, minimize the emergence of resistant organisms and most importantly to ensure patient safety. It was also found that a high number of patients were not vaccinated against respiratory pathogens. Educational programs focusing on optimal hygienic procedures as well as hand hygiene prove to be valuable tools for both the patients and the staff in controlling the development of infections.

Lastly, surveillance programs for infections in maintenance hemodialysis patients should be carried out in all regional dialysis centers. Such programs would aid in forming a national database that would provide information on frequency, clinical patterns of infections and differences among various dialysis units. This kind of information would in turn be of great value in promoting collaborative efforts to reduce the overall infectious complications in the hemodialysis population.

ACKNOWLEDGEMENT: We express our gratitude to Prof. Dr. S. A. Azeez Basha, Principal, Deccan School of Pharmacy for encouraging us to publish our academic research work. We remain thankful to the entire team of the nephrology department and also express our gratitude towards Owaisi Hospital and Research Centre for their co-operation and support.