ABSTRACT: The aim is to prepare sustained release multi-particulates dosage form of Dexketoprofen trometamol, which is the active isomer of ketoprofen. Utilization of active moiety with minimum drug dose and administration frequency sustained-release multi-particulates dosage form is explored. Sustained release pellets of the dexketoprofen trometamol were developed by the fluidized bed technology, in which drugs along with a binder and anti-adherent agents, were loaded onto microcrystalline cellulose inert beads. These drug-loaded pellets were again coated with Kollicoat SR 30D as sustained-release coating polymer, triethyl citrate as plasticizer and talc as an anti-adherent. The formulation was further statistically optimized for agglomerates formation, process efficiency, and drug release profile using central composite design (CCD). Results show that 16.9 to 18.5% w/w sustained release coating with 9.0-14.6% w/w talc and 8.1 to 16.5% w/w triethyl citrate concentration gives desired drug product quality attributes. Sustained-release multi-particulates were successfully developed for dexketoprofen trometamol, which maybe explored to manufacture various dosage forms like capsules, compressed tablets, pellets in sachet etc. for ease of patient compliance.

INTRODUCTION: Chirality phenomenon has play a major role in the synthesis and development of new drug therapy to achieve better therapeutics index 1. A molecule is referred to as chiral if it is not superimposable to its mirror image. The best example of chirality is our hand 2. Majority molecules of importance to living systems are chiral e.g., amino acids, sugars, proteins, and nucleic acids 3. Major advantages of chiral switching include: (1) an improved therapeutic index through increased potency and selectivity and decreased side-effects; (2) a faster onset of action; (3) a reduced propensity for drug-drug interactions, and (4) exposure of the patient to a lower dosage 4.

Dexketoprofen trometamol (DT) is a water-soluble salt of the dextrorotatory enantiomer of the NSAID ketoprofen 5. Racemic Ketoprofen has been used since 1973 as an anti-inflammatory, analgesic and antipyretic active drug substance and is one of the most potent in-vitro inhibitors of prostaglandin synthesis 6, 7. Dexketoprofen trometamol adminis-tration was found to be highly effective in treatment of moderate to severe pain when used as an analgesic in osteoarthritis, dysmenorrhea, gynecologic, orthopedic, and dental surgery 8. This effect is because of the S (+)-enantiomer of dexketoprofen while R (-) - enantiomer is devoid of such action 9. DT is not official in any pharmacopeia 6.

These multiple-unit doses are usually formulated in the form of suspensions, capsules, or orally disintegrating tablets, showing a number of advantages over the single-unit dosage system. The subunits of multiple-unit preparations distribute readily over a large surface area in the gastrointestinal tract, and these small particles (<2 mm) behave like liquids leaving the stomach within a short period of time. Their small size also enables them to be well distributed along the gastrointestinal tract that could improve the bioavailability, which potentially could result in a reduction in local drug concentration, risk of toxicity, and side-effects 11.

Manufacturing of Sustained Release Coated Pellets: Sustained release coating on drug-loaded pellets were done using liquid dispersion of Kollicoat SR30 D as sustained-release polymer which contains polyvinyl acetate (PVAc, 27%) stabilized with polyvinyl pyrrolidone (PVP, Povidone, 2.7%) and sodium lauryl sulphate (SLS, 0.3%), Triethyl citrate as a hydrophilic plasticizer and micronized talc as an anti-tacking agent. Sustained-release coating was done in a range of 10-28% with solid dispersion content of 20% w/w. Triethyl citrate was used as a plasticizer at 10% w/w concentration of dry polymer solid weight, and Talc was added as an anti-tacking agent at 5% w/w concentration of total solid material. To prepare sustained release coating dispersion (20% w/w), the Part quantity of purified water was added into the dispersion under mild stirring. TEC was added to this dispersion and stirred for 30 min to make homogeneous dispersion. Talc was dispersed into remaining purified water under continuous stirring, and this dispersion was added to previously prepared polymer dispersion. This dispersion was filtered through #60 to remove any lumps in dispersion.

This dispersion was then sprayed onto drug-loaded pellets too get final sustained-release coated micropellets of 400-700 µm. Till the completion of the spraying process, the dispersion was continuously stirred to avoid talc sedimentation.

Assay of drug-loaded pellets was carried out to determine the actual drug content inside the drug pellets. Sustained-release coated pellets were evaluated for in-vitro drug release in 500 mL SGF (pH 1.2) followed by SIF (pH7.4) using paddle apparatus (USP Apparatus –II) at 50 RPM. Drug release was compared to marketed product Oruvail 150 mg (Ketoprofen Capsules) by similarity factor (f2), mean dissolution time (MDT), and mean residence time (MRT). An f2 value between 50- 100 suggests that the two dissolution profiles are similar, and the mean dissolution profiles are assumed to differ by no more than 10% at any time point 13, 14.

Where Rt and Tt are the per cent dissolved at each time point for reference (R) and test (T) products.

Preliminary Trials of Drug Loaded Pellets: Process efficiency is one of the important critical quality attributes for effective drug loading process and to control the amount of drug-loaded onto pellets (i.e., assay). Wurster coating process involves many dependent and independent variables which affect process efficiency. The preliminary trial drug-loaded pellets were taken to study binder amount level on drug pellets assay, process efficiency, agglomerates, and fines formation, which are summarized in Table 5.

Drug Loading: Binder quantity play crucial role in adhesion of drug onto inert starter core pellets. Low binder concentration in drug layering suspension may results in powder loss during the drug loading process, which reduces assay of drug pellets. Higher binder concentration yields viscous and sticky dispersion, which results in agglomerates generation due to sticking of pellets with each other that necessitates slow spray rate and higher product bed temperature. Binder optimization trial in drug loading showed that there was an increase in process efficiency with an increase in the binder concentration. 5 & 7.5% w/w concentration of Povidone K30 with respect to drug amount gives greater than 90% process efficiency while a higher amount of agglomerates were observed for drug layering trial with 7.5%.

Based on preliminary trials for drug loading, Povidone concentration is selected as 5% of drug substance quantity. This gave good process feasibility and good adhesion of the drug onto the MCC pellets. Talc at 2% of total drug layering solid mass shows better anti-tacking property to remove unnecessary static charges as well as agglomeration generation during spraying process.

Sustained Release Coating: Sustained release coating formulation and process both play vital role in controlling drug release from the pellets. The feasibility trials for sustained release coating were taken by applying different % of weight gain. As the coating weight gain increases from 10 to 28% w/w, the drug release profile significantly decreases. 16% w/w weight gain give comparable drug release to that of the marketed product (Oruvail- Ketoprofen Extended-Release capsules) with f2 value of above 50. Even Mean dissolution time (MDT) and mean residence time (MRT) of pellets is comparable to that of a brand product. This selected 16% w/w coating weight gain was further optimized by varying levels of components to get appropriate robust formulation, which gives satisfactory quality attributes of dosage forms within narrow possible changes.

ANOVA results for agglomerate shows that model F value is 70.64, which is more than 0.05, which shows that the selected model is significant.

Here talc concentration in sustained-release coating solution affects significantly agglomerates formation during the coating process. The value of adequate precision is 28.107, which means that model can be used to navigate the design space.

ANOVA analysis results for drug release at 1 h shows that model F value is 43.99, which is more than 0.05, which shows that the selected model is significant.

Here coating weight gain plays a significant role in drug release at 1 h. The value of adequate precision is 22.988, which means that model can be used to navigate the design space.

ANOVA results for drug release at 4 h shows that model F value is 478.13, which is more than 0.05, which shows that the selected model is significant.

Here coating weight gain and talc concentration both play a significant role in drug release at 4 h. The value of adequate precision is 74.262, which means that model can be used to navigate the design space.

The statistical equation for the prediction of response Y5 (Drug release at 7 h) is:

The statistical equation for the prediction of response Y6 (Drug release at 10 h) is:

The overall conclusion of ANOVA results was revealed that % weight gain and Talc concentration are more significant parameters that affect the responses understudied, i.e. (agglomerates, process efficiency, and drug release). 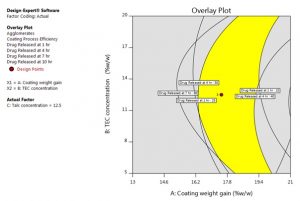 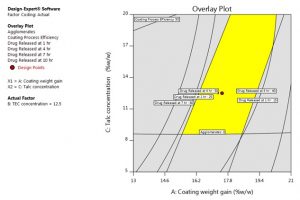 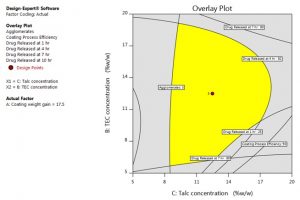 Yellow color area-design space in depicted overlay plot yield desired parameter settings for which all dependent responses will always be within the accepted level.

ACKNOWLEDGEMENT: The authors are thankful to Emcure Pharmaceuticals Limited for their support in this research work.

CONFLICTS OF INTEREST: We authors, the undersigned research article entitled “Sustained Release Multi-particulates Formulation of a stereo-selective molecule of Ketoprofen by fluid bed processor” confirm that we do not have any conflict of interest in connection to the proposed research work.