THE EFFECT OF ASPIRIN ON REPRODUCTIVE ORGANS OF FEMALE ALBINO RAT

THE EFFECT OF ASPIRIN ON REPRODUCTIVE ORGANS OF FEMALE ALBINO RAT

The aim of present investigation is to study the effect of oral administration of drug acetylsalicylic acid (ASA, aspirin) on female albino rat, Rattus norvegicus. The female rats (n=24) were allocated into 2 groups as control (n=12) and treated (n=12). The treated rats were given oral dose of aspirin 100 mg/ kg body weight for 15 days (n=6) and 30 days (n=6). Tissues enzymological estimations such as ACP (Acid Phosphatase) and ALP (Alkaline Phosphatase) along with histopathological studies of reproductive organs (ovary and uterus) were done. The present investigation indicated that, aspirin significantly increased ACP and ALP content in reproductive tissues and also caused significant histopathological variations in reproductive organs such as ovary and uterus by modulating certain enzyme metabolism in female albino rats.

INTRODUCTION: Aspirin (acetylsalicylic acid, ASA) has been used as one of the most famous, cheap, easily available and widely used Non Steroidal Anti Inflammatory Drug (NSAID). Aspirin is used in versatile purpose such as, anti-inflammatory (in joint diseases), anti-platelets (in cardiovascular disease), analgesic and antipyretic 1.

Salicylic acid is metabolized via conjugation in the liver to form salicyluric acid and several other metabolites. It is also well known that, aspirin is rapidly absorbed from the stomach and small intestine, primarily by passive diffusion across the gastrointestinal (GI) tract which rapidly hydrolyzed to salicylic acid by esterase in the GI mucosa and blood plasma. It dispersed throughout the body after ingestion, with the highest concentrations found in the blood plasma, liver, renal cortex, heart and lungs 2. Aspirin is a safe drug at low doses but also it has life-threatening side effects when administered at high doses.

Long-term therapeutic administration of aspirin is associated with nephrotoxicity, hepatotoxicity, gastrointestinal ulcerations, and even renal cell cancer due to its adverse effects on multiple organ systems 3, 4. Aspirin can cause adverse affects in pregnancy 5.

The animals were kept into polypropylene cages and acclimatized to laboratory condition i.e. 23-25oC temperature with 14 hours light and 10 hours dark cycle at least for 7 days prior to initiating to the experiment. The animals were fed with standard rat feed and water ad libitum. A dose of aspirin (100mg/kg b. wt.) was daily administered orally, through gavage (administration of food or drugs by force, especially to an animal) for 15 and 30 days. The animals were divided into 3 groups as control (n=12) and treated (n=12).

After above treatments, the animals were weighed, sacrificed on 16th and 31st day and for enzymological analysis tissue homogenate of reproductive organs (ovary and uterus) were prepared and for histological study ovary and uterus were dissected out quickly, cleaned, dried with blotting paper and subsequently fixed in Bouin’s fluid. Therefore, following parameters were done by appropriate methods.

Statistical analysis: Standard error of mean (SEM) were calculated and p value of treated batches were estimated by correlating them with control batch. Student‘t’-test described between the mean values obtained 10.

Our present findings showed that, the histopathological changes in both ovaries and uterus (Fig. 1-6) of treated rats may be due to the vascular properties of aspirinas well as it induced vasoconstriction and smooth muscle atrophy via inhibition of the synthesis of different prostaglandin viz. PGE2, PGD2, PGF2 and PGI2 which are potent vasodilators 1, 13.

Apart from this, aspirin (100mg/kg b.wt.) caused the structural ovarian changes such as highly atrophy, degeneration, vacuolization with less cytoplasmic material and reduced nuclei of cells (such as follicular cells, granulosa cells, thecal and stromal cells) of ovarian follicles. As well as, corpus luteum is clearly visible with hypertrophied cells and interstitial tissues are also atrophied in condition and showing areas of vasoconstriction (Fig. 2, 3).

Author suggests that, aspirin administration persistently arrest luteolysis and enhance the growth of intact and functional corpora lutea due to prolongation of the diestrous phase and delayed luteolysis via inhibition of prostaglandin F2α by high level of progesterone hormone 1. Moreover, prolonged treatment of aspirin significant decrease in the number of growing follicles with complete absence of graffian follicles and significant increase in the number of corpora lutea, diameter of the granulose lutein cells and absence of regressed corpora luteal might be due to the strong anti-inflammatory effect of progesterone hormone which secreted by the active corpora lutea via suppression of the FSH and LH hormones 14, 15.

EXPLANATION OF FIGURES OF 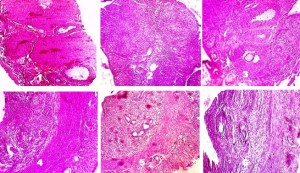 CONCLUSION & SUMMARY: Finally, it may be concluded that aspirin at the dose of 100mg/kg b.wt. significantly caused histomorphological variations in reproductive organs such as ovary and uterus and increasing ACP and ALP content in reproductive tissues of young albino female rats, Rattus norvegicus. If it is taken continuously by patients; they may suffer fromreproductive problems.