Hyperalgesia is one of the debilitating complications of diabetes. The thermal allodynia and hyperalgesia in diabetic mice may be due to the hyperactivity of C-fiber in the spinal cord. Transient receptor potential vanilloid type 1 (TRPV1) present in spinal cord and activation of C-fibre may involve in hyperalgesia in diabetic mice. Desipramine is one of the tricyclic antidepressants, effective in diabetic neuropathy. The intravenous administration of desipramine depresses the C-fibre reflex that will involve in activation of convergent neurons of the spinal cord. Thus, the present study was carried out to find out the role of TRPV1 in desipramine induced analgesic effect in diabetic hyperalgesia. Mice were administered capsaicin (1 mg kg-1), capsazepine (15 mg kg-1), desipramine (10 mg kg-1) from day 4 to day 11 after induction of diabetes and the nociceptive threshold was measured in terms of reaction time, tail flick latency and tail withdrawal latency. The nociceptive threshold was significantly (p < 0.05) lower in diabetic mice as compared with control group. Capsaicin produced a significant (p < 0.05) decrease in reaction time, tail flick latency and tail withdrawal latency as compare to diabetic group. Desipramine caused a significant (p < 0.05) increase in nociceptive threshold in diabetic group as well as capsaicin treated diabetic group. It was concluded that desipramine produced analgesic effect in diabetic hyperalgesia and TRPV1 might be involved in desipramine induced analgesic effect.

INTRODUCTION: Antidepressants are widely used in chronic pain states including both inflammatory and neuropathic pain conditions.  It has been suggested that antidepressant drugs have specific analgesic properties, and various clinical 1, 2 and experimental 3-5 types of evidence together demonstrate that the analgesic effect may be independent of the antidepressant effects. Interactions of antidepressants with biogenic amines, opioid systems, excitatory amino acid receptors, substance P and calcium and sodium channels have been considered to be involved pain relieving properties of antidepressants 6.

Desipramine (Figure 1) is one of the tricyclic antidepressants, which block the uptake of amines by nerve terminals, by competition for the binding site of the amine transporters. Oral desipramine enhances the analgesic effects of morphine for post-operative pain 7, reduces pain intensity in post-herpetic neuralgia 8, and produces pain relief in diabetic neuropathy patients 9.

Acute administration of desipramine is antinociceptive in animal models of inflammatory pain 10 and attenuates thermal hyperalgesia in models of neuropathic pain 11, 12.

In light of above facts, the present study was designed to find out the role of TRPV1 in desipramine induced analgesic effect in STZ induced diabetic mice model.

Animals: Healthy albino mice of either sex, weighing 25–30 g were procured from Zydus Research Centre, India. The animals were housed and maintained at 298 K, 50 ± 15 % RH for 12 hour light-dark cycles, in polypropylene cages with free access to food and water ad libitum.

The experimental protocol (KBIPER/2011/247) was approved by the Institutional (K.B. Institute of Pharmaceutical Education and Research) Animal Ethics Committee (IAEC) under the Committee for the Purpose of Control and Supervision of Experiments on Animals (CPCSEA) guideline, before carrying out the project.

Induction of type 1 diabetes: Diabetes mellitus was induced in mice using STZ. Streptozotocin was freshly prepared by dissolving 1 g STZ in 10 mL 0.1 N cold citrate buffer (1.45 g citric acid and 1.05 g sodium citrate dissolved in 100 mL distilled water) at a pH of 4.5. Single dose of STZ (25 mg kg-1, i.p.) was administration for induction of diabetes and 10% W/V oral glucose was given to all animals after 6 h of STZ administration to prevent the hypoglycemic shock.  Control animals received an equivalent volume of saline. Confirmation of hyperglycemia was made 3 days later by measurement of the fasting blood glucose (FBG) level. Mice with FBG level >14 mmol L-1 were considered diabetic and were included for further study 20.

The mice were divided into the following groups:

Measurement of Nociceptive Threshold: For the measurement of nociceptive threshold, the hot plate, tail immersion test and the tail flick test were carried out at 0, 30, 60 and 120 minutes intervals.

The time taken by mice to withdraw (flick) the tail was taken as the reaction time. The animals were subjected to the same test procedure at 0, 30, 60, 120, and 180 min after the administration of drug 22.

Statistical analysis: All the values were expressed as Mean±SEM. The data were analyzed by One-way Analysis of Variance (ANOVA) followed by Tukey's multiple range test. The level of significance was expressed at p < 0.05. 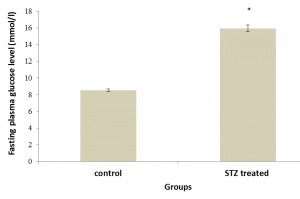 Nociceptive threshold was significantly (p < 0.05) increase in desipramine as well as capsazepine treated mice than diabetic group at 11 day. In animals pretreated with desipramine and capsazepine before capsaicin administration, there was a significant (p < 0.05) increase in reaction time, tail flick latency and tail withdrawal latency as compared with capsaicin treated diabetic mice (Figure 3). 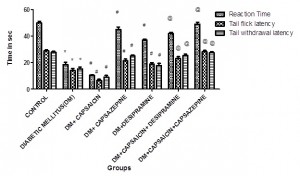 DISCUSSION: The present work aimed to study the involvement of TRPV1 in analgesic effect of desipramine in diabetic hyperalgesic mice.

The transient receptor potential vanilloid 1 (TRPV1) receptor, previously known as the vanilloid receptor 1 (VR1) or capsaicin receptor, is a ligand-gated, non-selective cation channel expressed predominately by primary nociceptive sensory neurons 14. It activated by the pungent component of hot chilli peppers, capsaicin, as well as heat, protons and some endogenous substances known to be associated with tissue inflammation. TRPV1 has, therefore, been suggested to be a molecular integrator of chemical and physical stimuli that elicit pain 23. It has been shown that TRPV1 play a significant role in nociception and in the pathogenesis of experimental diabetic hyperalgesia and the development of its complications 16.

Streptozotocin (STZ) is a glucosamine nitrosourea compound used for the induction of the diabetes mellitus in animals and also used to study the associated complications. The induction of diabetes by STZ is characterized by initial phase of hyperglycemia, then hypoglycemia and then it will cause hyperglycemic effect in animal. This effect will cause diabetic mellitus after 3 days of STZ administration 24.

In present study, the STZ treated mice showed significantly (p<0.05) increase in FBG level and became diabetic. The diabetogenic action of STZ was also accompanied by the development of persistent hyperalgesia by enhancing expression and function of TRPV1 receptor in DRG neurons 25.

Tricyclic antidepressants exhibit anti-nociceptive properties in neuropathic, nociceptive and inflammatory models of pain 28 but this effect through the TRPV1 receptor is not clear. It has been demonstrated that desipramine is effective in diabetic neuropathy and can serve as a relatively selective adrenergic probe of analgesic mechanisms 9.

Desipramine, which is a powerful reuptake inhibitor of norepinephrine, has been found to have marked antinociceptive properties in some investigations 3, 29.

Oral desipramine reduces pain intensity in post-herpetic neuralgia 8 and produces pain relief in diabetic neuropathy patients 9. The intravenous administration of desipramine depresses the C-fibre reflex that will involve in activation of convergent neurons of the spinal cord 28, 30, 31. The thermal allodynia and hyperalgesia in diabetic mice may be due to the hyperactivity of C-fiber in the spinal cord 32, 33.

This suggests the involvement of TRPV1 in desipramine induced analgesic effect in diabetic hyperalgesia.