ABSTRACT: Alcohol use disorders (AUDs) recognized as substantial public health problem. It is grown-up many risk factors influence on alcoholism including social, behavior, an environment, and heredity conditions on the global. Alcuremon preparation was based on medicinal herbs and used for the treatment of alcohol-related disease and alcoholic liver disease in traditional Mongolian medicine. Male Wistar rats were used to induce alcoholic liver disease and chronic ethanol (EtOH) intoxication with neurotransmitter imbalance by oral administration of ethanol (subchronic 30% EtOH 10 ml/kg/day for 14 days and chronic 40% EtOH 7 ml/kg/day for 60 days). Alcuremon 50, 100 and 150 mg/kg were given orally for the same day as ethanol administration days. Some biochemical parameters and liver HE stains were examined in subchronic intoxication with alcoholic liver disease. Chronic ethanol-induced neurotransmitters changes were measured by enzyme-linked immunosorbent assay (ELISA) in brain homogenate of nucleus accumbens (NAc) and ventral tegmental area (VTA). Hippocampus was stained with cresyl violet. Data were expressed as mean ± SD. The difference between the groups was compared using one-way analysis of variance (ANOVA) followed by the Tukey’s post hoc test. Alcoholic liver damages were significantly lower in the EtOH + Alcuremon treated groups compared with the EtOH group. The EtOH + Alcuremon treated groups had a higher neuronal cell in the hippocampal CA1 and CA3 areas, and the level of the neurotransmitters was significantly balanced compared with the EtOH group. Alcuremon preparation has hepatoprotective, neuroprotective and neuromodulator effects on ethanol intoxication in rats, probably due to the presence of polyphenolic compounds.

As shown by the Global status report on alcohol and health 2018, the harmful use of alcohol resulted in some 3 million deaths (5.3%) worldwide and 132.6 (5.1) million disability-adjusted life years (DALY) of all DALY in that year 1, 2.

In 2013 from the study of alcohol consumption and epidemiology of alcohol-related disorders in Mongolia, researchers Nasanjargal L and Nasantsengel L reported that 60% of the population in Mongolia uses alcohol. Hence, this investigation shows that alcohol contributes to 8.6% harmful effects, 9.9% alcohol abuse, and 6.2% alcohol dependence 3. Alcohol use disorders (AUDs) is a substantial public health problem. It is grown-up many risk factors influence on alcoholism including social, behavior, an environment, and heredity conditions on the global.

The liver is a primary target for the detrimental effects of alcohol metabolism, which express high levels of alcohol oxidizing enzymes, alcohol dehydrogenase, aldehyde dehydrogenase, and CYP2E1 4, 5, 6. Pathological changes in EtOH intoxication model of alcoholic liver disease (ALD) including hepatocyte damages and serum marker enzymes are related to liver function 7, 8, 9, 10, 11. Alcohol’s effect on the brain neurotransmitter change plays an essential role in AUDs, given EtOH’s directly due to many neuropharmacological actions, including its intoxicating, sedative, anxiolytic and addictive properties 12. According to the in-vivo and in-vitro study, the determined effect of EtOH on neurotransmitter release was changed in the rat’s brain region, as well as in prefrontal cortex, NAc, VTA and other. Therefore, brain damage at early changes of EtOH intoxication with hippocampus structure and neural loss was detected 13, 14, 15.

D Diosmetin is a flavonoid of the alcuremon and, it barely activates TrkB, like brain-derived neurotrophic factor (BDNF), also suppresses caspase-3 activation in neurons weakly and nonselective 27. Flavonoids, luteolin, diosmin, and diosmetin, were found to inhibit activation/ phosphorylation of STAT3 induced by IL-6 in cultured neuronal cells 28. Modern medication treatment drugs contain one substance, which reduces drinking behavior in AUDs, having a single - functioned target mechanism. It is insufficient for AUDs drug treatment. Therefore, poly compounds of the alcuremon, it probably has systemic treatment action as well as protecting neurons and hepatocytes in alcohol intoxication. The animal model is convenient for alcohol-induced neurotransmitter changes and liver disease. In this study, we investigated the hepatoprotective, neuroprotective and neuromodulator effects of alcuremon preparation on EtOH induced intoxication in rats.

Alcuremon Preparation: The study was performed from 2016 to 2017, at the Research Center of Institute of Traditional Medicine and Technology (ITMT). Alcuremon preparation was prepared in the Research Center of ITMT. Briefly, Gentiana barbata Froel., Carthamus tinctorius L., Terminalia chebula Retz., and Rosa acicularis Lindl., were collected from the Traditional Medicinal Drug Factory of ITMT. All the herbs were identified by Sc.D. Prof Ganbold E (No.: 2016/11-15). The herbs were dried and pulverized then stored in the dark at the room temperature. These herbs were extracted (3:1) in 70% ethanol by a re-maceration method. Alcuremon preparation contains the extract, limonic acid, and sodium benzoate.

Animals: Male adult Wistar rats (Healthy, 12-14 weeks, 220-250 g) were randomly selected from our animal house. They were raised in the animal house of the Research center, ITMT, Ulaanbaatar. Rats were kept in the laboratory under a constant condition of light/dark (12:12) and temperature (20 ± 2) with animal cage, free access to a standard animal diet and tap water for 7 days before and during the experiment. The experimental protocols were approved by the Ethical Committee of ITMT to minimize animals suffering (No. 02/2015). These guidelines were in according to international principles for the care and use of laboratory animals.

All animals in the experimental groups survived until the end of the experiments. In the 15th day, rats were anesthetized with an injection of ketamine hydrochloride 80-90 mg/kg and then blood was collected by cardiocentesis for biochemical analysis. The rats were immediately euthanized by cervical dislocation after blood collection, and then the liver was harvested for histopathological assessments. 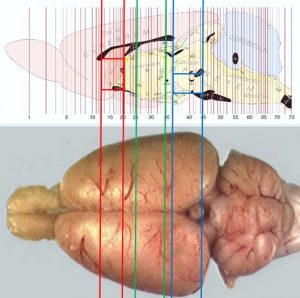 Brain Homogenization and Neurotransmitter Analysis: The brain samples were homogenized for 15 sec by an ultrasonic homogenizer (JY88IN, China), then brain homogenates were centrifuged at 14000 rpm for 60 min (room temperature was 4 - 6°C during the procedure). After centrifugation, first supernatants were immediately collected and stored in a -20 °C for neurotransmitter analysis.

Then pellets were vortexed in 1.0 ml brain homogenization buffer before being centrifuged at 14000 rpm for 60 min. After centrifugation, second supernatants were immediately collected and stored in a -20 °C for neuro-receptor analysis, 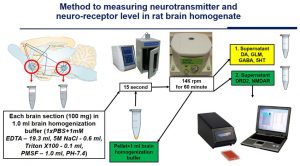 Dopamine (DA), glutamate (GLM), serotonin (5HT) and gamma-aminobutyric acid (GABA) were quantified in the collected first supernatants, dopamine receptor D2 (DRD2) and N-Methyl-D-aspartate receptor (NMDAR) were quantified in the collected second supernatants using rat ELISA kits (Shanghai, MLBio Biotechnology Co) according to the manufacturer’s instructions. The absorbance was read at 450 nm using an ELISA microplate reader (ChroMate-4300, USA). The intensity of the color was directly proportional to the concentration in Fig. 2.

Biochemical Analysis: Blood was collected and standing at room temperature for 15 min, and the samples were centrifuged at 3000 rpm for 10 min to separate the serum. Subsequently, the serum samples were analyzed by assays for alanine aminotransferase (ALT), aspartate aminotransferase (AST) and alkaline phosphatase (ALP) using a semi-automatic biochemistry analyzer (DURUI DR-7000D).

Histopathology: The samples (the liver and brain hippocampus section) were fixed in 10% formaldehyde and embedded in paraffin. Then 4-6 micrometer sections were taken from the paraffin-embedded blocks by a microtome. Liver sections were deparaffinized and stained with hematoxylin and eosin (HE). Brain hippocampus sections were deparaffinized and stained with cresyl violet. After being stained by HE and cresyl violet, the liver and hippocampus morphology were observed and photographed using an Olympus imaging system.

Statistical Analysis: The data were shown as mean ± SD. An analysis of variance (ANOVA followed by Tukey’s post hoc test) was performed to determine significance using software GraphPad Prism 5.0 and a value of p<0.05 was considered as significant.

Effect of Alcuremon Preparation on Subchronic Alcohol Intoxication with Alcoholic Liver Disease in Rats: In-vivo, biochemical parameters including ALT, AST and ALP levels for all groups at the end of the experiment was shown by Fig. 3. Administration of EtOH has considerably increased the levels of serum ALT, AST, and ALP when compared to the water group (#p<0.05). During the EtOH, the serum biochemical parameters of animals treated with alcuremon 50 mg/kg as well as alcuremon 100 mg/kg significantly (*p<0.05) decreased.

In the EtOH group, the hepatocytes present small or medium fatty vacuoles around the nucleus (microvesicular and macrovesicular changes) and abnormal arrangements of the sinusoid. Hepatic steatosis is the accumulation of triglycerides and fatty acids in the liver cells. Accumulating fats and triglycerides has shown that alcoholic liver disease correlates with the increasing level of serum ALT, AST, and ALP. The liver consists of an inter-anastomosing network of hepatocytes arranged in thick cell plates separated by sinusoids and hepatocytes along with vascular channels, forming organized structures which stored structural and functional units in alcuremon treated groups. In other words, histological examination showed no pathological abnormalities in the liver at the EtOH + alcuremon treated groups Fig. 4. 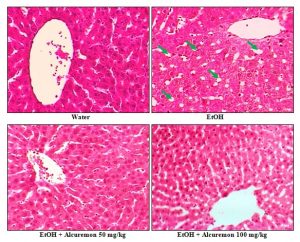 FIG. 4: PHOTOMICROGRAPHS OF HISTOLOGICAL STRUCTURES AND CHANGES IN THE RAT LIVER THAT HEMATOXYLIN-EOSIN (HE) STAINED LIVER SECTION FROM RATS OF EACH GROUP. HE SECTION SHOWS INFLAMMATORY CELL INFILTRATION AND LIPID DEPOSITS (GREEN ARROWS) OF HEPATIC STEATOSIS CAUSED BY ALCOHOL. EtOH: ethanol. Magnification ×200

FIG. 5: NISSL STAINING OF NEURONS IN THE CA1 AND CA3 REGIONS OF THE RAT HIPPOCAMPUS OF EACH GROUP. A LARGE NUMBER OF DENSE PYRAMIDAL AND GRANULE CELLS WERE OBSERVED IN THE HIPPOCAMPI OF WATER GROUP RATS AND FILLED NISSL BODIES IN THE CYTOPLASM. CA: Cornu amonis, EtOH: ethanol, Magnification × 200.

Anticholinesterase (AChe) properties of Terminalia chebula Retz. has reported in some research 34, 35. The review by Amir R et al. focuses on Terminalia chebula Retz. with a high content of phenolic constituents exhibits strong antioxidant and neuroprotective activities in-vitro and in-vivo. Ache induces apoptoticand necrotic cell death by inducing membrane depolarization and NMDA receptor activation with consequent Ca2+ influx and modulation of the α7 nicotinic acetylcholine receptor in hippocampal cultures. Therefore, AChe has the main role in neurodegeneration and AChe inhibitors could be effective in neuroprotection 36.

Gentiana barbata Froel., the herb contains 0.2% alkaloids, 2.3–5.91% xanthones, flavonoids: 5,7,3’-trihydroxy-4’ -methoxyflavone (diosmetin) and others 19. Diosmetin is barely activated tyrosine receptor kinase B (TrkB), weakly and nonselective suppressed caspase-3 activation in neurons 27. TrkB-mediated BDNF regulates synaptic structure and strength in hippocampal and other neurons. It may have an effect of balancing neurotransmitters release in neural circuits 37.

Carthamus tinctorius L., kaempferol decreased hepatocyte cellular necrosis and infiltration belonged to an antioxidant in a CCl4 rat model of hepatitis 39. It can protect neuron via inhibiting STAT3 and nuclear factor-κB 40. In recent study showed that hydroxysafflor yellow A protects the liver of rats with chronic alcohol intoxication, which increases liver superoxide dismutase (SOD) and glutathione peroxidase (GPx), reduced TGF-β1 expression and decreased serum biochemical parameters such as ALT and AST 41.

Consequently, neuroprotective, balancing neurotransmitters and hepatoprotective effects of Alcuremon, which are related to chemical compounds of the preparation such as diosmetin, luteolin, gallic acid, kaempferol, hydroxysafflor yellow A, hyperoside and others. However, this study limited the only in-vivo, and further investigations are needed to conduct in in-vitro experiments and various models of alcohol intoxication.

CONCLUSION: This study demonstrated the hepatoprotective, neuroprotective & neuromodulator effects of alcuremon preparation based on Mongolian herbal medicine Channadselshi in the rat model of ethanol intoxication. Furthermore, the action of balancing neurotransmitters, hepato-protective and neuroprotective effects were associated with biologically active components of alcuremon. Polyphenolic compounds, gallic acid, diosmetin and others could be responsible for this systemic pharmacological actions.

Further investigations are necessary to check the effects or mechanism of this herbal preparation in various models of alcoholism over any definitive conclusion.

ETHICAL MATTER: The experimental procedures and protocols were approved by the Ethical Committee of the Institute of Traditional Medicine and Technology (No. 02/2015). These guidelines were by the accepted principles for care and use of the laboratory animals.

ACKNOWLEDGEMENT: We thank the colleagues of the Institute of Traditional Medicine and Technology for support during this study.

AUTHORS’ CONTRIBUTIONS: BJ designed and coordinated the study. BJ and NG carried out the animal experiments, neurotransmitter analysis, biochemical analysis, data analysis and wrote the manuscript. The alcuremon preparation was prepared by SB. AA carried out the histology and microscopic analysis. CC advised the work. All authors read and approved the final manuscript.